Climbing the Peaks of the Lakes of the Clouds Basin

I was really chomping at the bit to get in some high elevation hiking.  It was the end of July when I last hiked.  Even though I hadn't hit the trails by foot, I mountain biked around 400 miles in that time.  While I enjoyed the mountain biking, I was ready to visit some summits that I couldn't reach on my bike.

Puma was working during the day Monday and this was a good chance for me to head to the mountains for a longer hike.  Better yet, there was a beautiful, clear day forecasted.

My local backyard mountain range, the Sangre de Cristos were on my menu.  My friend Drew Petersen recently visited the Lakes of the Clouds near Westcliffe, CO.  The area sounded appealing and it's surrounded by numerous 13,000 foot summits.  The east side of the Sangres has numerous alpine basins with high mountain ponds surrounded by summits.  I have visited several of these basins and they are enjoyable hikes.  The Lakes of the Clouds sounded promising.

I turned off the Rainbow onto the Swift Creek Trail, quickly entering the Sangre de Cristo Wilderness.  The Swift Creek Trail is fairly rocky as it climbs toward the Lakes of the Clouds Trail.  After a mile or so on the Lakes of the Clouds Trail I reached the lowest of the three lakes.  My goal was to climb Spread Eagle Peak from the lakes before heading onto Peak of the Clouds and Silver Peak.  The lower two lakes are just below treeline but offer views of the surrounding alpine scenery.

There isn't a ton of information on these somewhat obscure peaks.  None of the mountains have trails so I had to make my own route.  I was told of a herd path by the first lake.  This trail didn't look too promising so I continued to the higher two lakes.  One report indicated a herd path at the highest lake as well but nothing was obvious.  I returned to the original herd path at the lower lake.  There are many herd paths left by fisherman and campers in the area so most of the trails dead end sooner or later.

This herd path was nothing more than a fisherman path close to the lake.  At this point, Spread Eagle Peak towers some 2000' directly above the lake.  The north slope of Spread Eagle is nearly 100% rock and extremely steep.  I continued upward at an angle hoping to reach a more gradual slope.  I found a short break on a few stretches of grass but the terrain never got any easier.

I stopped to assess my route, grab a snack, and put on more layers.  The mass of Spread Eagle Peak blocked the sun making it chilly enough to put on a hat and gloves.

With no better option, I continued straight up the rocky slope.  I found that the rock was very solid and I managed to make good time despite the steep vertical climb.  After gaining nearly 3/4 of the elevation, I rounded the steep slope into more gentle terrain.  I finally got out of the mountain's shadow and into the sun at this point, well after 10AM.  I had a more gradual approach toward the ridge.  The terrain was still rocky.  To save some time I intersected the ridge by climbing up a short couloir.  The couloir met the ridge just below the toughest point along the ridgeline.  There is a narrow section requiring some scrambling that is at least class 2+ difficulty, maybe class 3 depending on the line chosen.

After the tough stretch on the ridge, I quickly reached the summit of Spread Eagle Peak around 11AM.  I got a good layout of the central Sangres from my vantage point at 13,423'.  I studied my route ahead before enjoying the surrounding terrain.  Like most places in the central Sangres, the view of the Crestones draws your attention.  To the north, the long line of the Sangre de Cristo crest stands out with most peaks clearly visible up to Cottonwood Peak.  The southern Sawatch Range is visible in the distance.  Just a mile or so away, 13,800' Rito Alto Peak hulks over Hermit Pass.  The connecting ridge to my next destination, Peak of the Clouds  was clearly visible just ahead.  Rito Alto, Peak of the Clouds, and many other northeast facing slopes toward the Crestones still had a light dusting of snow from the past week.

Except for the brief tricky stretch on Spread Eagle's ridge, the walk was quite pleasant to Peak of the Clouds.  The route was in full sunlight and I could remove my fleece and gloves.  For many years, I have attached my gloves to my pack's sternum strap for easy access.  I did this when I left Spread Eagle.  I must have done so poorly this time.  When I stopped to take a photo, I realized the gloves had fallen off.  I retraced my steps a short distance but gave up looking.  It was fairly breezy and they probably blew off the ridge into the Lakes of the Clouds basin.

The ridge between the two summits was grassy much of the way.  Even the steep ridge to the summit of Peak of the Clouds was mostly grass, making for a fairly easy summit climb.  I reached the summit fairly quickly.

At 13,524', Peak of the Clouds was my high point for the day.  Technically, the mountain doesn't have an official name and is listed as Unnamed 13,524.  Since the peak has a prominent appearance and is located directly above the Lakes of the Clouds, the informal name Peak of the Clouds is used and seems to be generally accepted.  The summit is fairly small but the views are probably even better than Spread Eagle Peak's views. 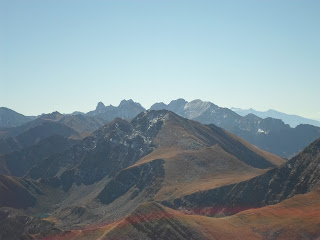 The Crestones in the distance

I didn't linger on the summit.  The crux of my route was just ahead of me.  As I said, there isn't a lot of info on these peaks.  I knew the descent from Peak of the Clouds was tricky, but didn't have any consistent details. I knew there was scrambling, but I wasn't sure to what extent since reports ranged from class 2-4 terrain.

From the summit, there was an obvious knife edge along the spine of the ridge.  It looked manageable however and I attacked it head on..  To the right was basically a vertical cliff and to the left it was steep but slabbier.  Following the spine of the ridge was generally a stiff class 2 affair punctuated with class 3 sections.  Below the ridge to the right was a shelf that looked like it provided easy passage.  I wasn't convinced that the shelf regained the ridge however and it eventually cliffed out.  It may have been possible to keep the travel all class 2 by dropping a fair distance off the ridge to the left.

As I stayed on the ridge I eventually hit dicier terrain.  There were some definite class 4 sections over a steep knife edge along the ridge proper.  At this point the drop to the right was to oblivion and the drop to the left had a nearly vertical drop that was far enough to be ugly.  A few places I had to gingerly downclimb from the ridge to put myself on safer terrain as the spine of the ridge abruptly ended.  Luckily the rock was solid and dry.  As I finally made it to the saddle, the terrain became much easier.  I took a look back at Peak of the Clouds ridge and was impressed with its steepness and surprised it wasn't more difficult.

Much of the remaining route to Silver Peak traversed high grassy tundra.  The ridge to Silver's summit was very gradual and pleasant.  Best of all, I could finally enjoy the endless views ahead of me.  I made it to Silver's 13,513' summit a few minutes before 1PM.  From the summit I could look back and see the route I had followed throughout the day.  I sat a few minutes to have lunch and enjoy the scenery before descending back into the Lakes of the Clouds basin just below.


Just like Peak of the Clouds, Silver Peak in an unofficial name.  Technically the peak is Unnamed 13,513.  I don't know how it became Silver Peak but this is generally excepted by most as the peak's name despite not appearing on maps as such.

The descent traveled over a moderate grassy slope allowing me to make good time.  Not too far above the upper lake my travel was impeded by a cliff band.  Rather than guess on which cleft in the cliff descended to the bottom safely, I paralleled the top of the cliff until I reached its edge and could simply pass around it.  I had to descend through one steep gully but it was fairly short with not too much risk.

My last obstacle before regaining a trail was the dense willows that surrounded the lakes.  Fortunately I was able to avoid the willows by traveling over the rockfall between the cliffs and the lake.  I then traveled the rocky shoreline of the upper lake and met the trail just beyond the lake.

Other than a few hawks and ravens soaring over the ridges I didn't see any wildlife.  As I was walking along the upper lake, I had a wildlife sighting that I didn't expect.  I saw movement in the water quite frequently.  I stopped to look and realized it was trout.  Not that trout are usually that exciting, but the lake was teeming with trout in the shallow water along the shoreline.  At certain spots I could see dozens of the fish at a time.  Even more remarkable was the size of the trout.  They seemed to be consistently in the 12" range which seemed big for the high altitude location.  This wasn't something I expected in a small alpine tarn at 11,500'.

After I enjoyed watching the trout, I regained the trail just past the lake shore.  After I passed the lowest lake, I was back in the trees for good and had an uneventful hike the last 4 or so miles back to the trailhead.  I reached the trailhead at 3PM, a full 8 hours after I departed.

This hike was typical of a peak bagging trip in the Sangre de Cristos. There were big elevation gains over rugged terrain   Since much of the route was off trail. I'm estimating the hike was in the neighborhood of 13-14 miles with over a mile of elevation gain.  I don't recommend this particular route for the inexperienced mountain traveler.  Miles of continuous hiking were off trail.  The descent from Peak of the Clouds has some tricky route finding and could lead to trouble.  A beginner may run into difficulty negotiating the cliffs between Silver Peak and the basin as well.  To those not experienced with route finding, the hike to the lakes is a worthwhile trip by itself.  The lakes offer beautiful views of the surrounding peaks and apparently are full of trout.  There are nearly endless spots to camp within close proximity to the lakes as well.

The Sangre de Cristos are the closest mountain range to my home.  I have hiked in the Sangres more and climbed more summits here than in any other range in Colorado.  This was my 4th big outing here this season.  A trip into the Sangres is always challenging but never disappoints with its rugged terrain and awesome scenery.  Hiking in October let me have the mountains to myself, not seeing another person the entire time.  I also had a perfect cloudless day maybe reaching 50F on the summits despite a chilly start. While standing on the crest of the range during this trip, I was already planning future trips.