The Santanoni Range stands in the southwestern corner of the Adirondack High Peaks.  Several deep drainages isolate the range, letting it stand out when viewed from other summits in the area.  My last trip into the High Peaks, hitting the peaks of the Seward Range, offered a particular good vantage of the Santanoni Range.  Since I had numerous good looks at the range, I thought it would be a good place to head for my next High Peaks outing.

Three peaks make up the bulk of the Santanoni Range.  4,607-foot Santanoni Peak stands as the 14th highest peak in the Adirondacks and the highest in the Santanoni Range.  4,442-foot Panther Peak anchors the northern end of the range.  3,820-foot Couchsachraga Peak lies to the west of the main ridge, rising above the Cold River.  While there are lesser summits in the range, these three peaks are part of the Adirondack 46ers and the only three that are reasonably accessible without rough bushwhacking. 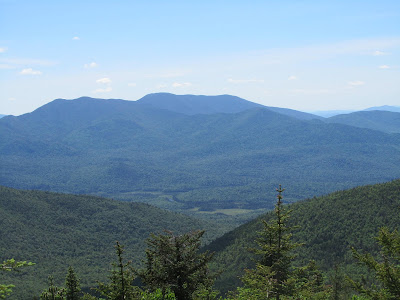 Like several Adirondack peaks I visited in the past, the paths to the summits of the Santanoni Range are herd paths that have evolved into trails over the years from use.  They receive no official maintenance or signage.  They tend to be rougher than official trails with narrower tread and tighter vegetation along the trail.

With a promising forecast, I set out early on Wednesday August 14th.  As I often do, I brought along my dog Choya for the adventure. I began my hike at 650AM on the Bradley Pond Trail.  After following an old gravel road for nearly two miles, the Bradley Pond Trail becomes more of an actual trail.  The trail climbs fairly gradually as it makes its way past several creeks and eventually Santanoni Brook.  Several waterfalls cascade in Santanoni Brook.


A cairn marks the turnoff for Santanoni Peak about 3.5 miles from the trailhead.  This route unofficially goes by the name “Santanoni Express,” or simply “Santa Express.”  The route immediately crosses the brook, which could be tricky in high water.  The climbing starts out modestly along the route with a few minor rock obstacles.  After a mile and a half, the climb becomes steeper with more serious rock obstacles.  About two miles along the route, the path reaches several open ledges with excellent views toward the heart of the Adirondack High Peaks.  Santanoni’s best views are from these ledges.  Many of the highest peaks in the Adirondacks come into view, including a nice look at the Algonquin Range and Mt Marcy.


Beyond the ledges, the route reaches an unmarked junction.  A short spur to the south reaches the summit of Santanoni.  While the summit proper offers little in the way of scenery, several open spots enroute to the summit allow views in all directions.  Several large muddy sections make passage along the summit spur difficult as the route travels through dense vegetation.

I left the summit as quickly as I reached it.  I backtracked a tenth of a mile or so and enjoyed the views on an open ledge while I took a short break, allowing Choya a chance to drink.  From the various open outcroppings, the views are quite expansive.

I left Santanoni and headed toward Panther Peak.  The descent from Santanoni travels over numerous slabs and small ledges that become steep at times.  The path held onto a lot of deep mud as it traversed the Santanoni-Panther saddle.  The mud combined with rock made the footing treacherous.  Nearly an inch of rain the previous week didn’t help matters.  The conditions were similar to early spring mud season.  My shoes quickly wetted out and Choya quickly became caked in mud from his belly down.

After a mile of travel along the path, the route reaches an unmarked junction, informally known as “Times Square.” Continuing straight leads about a ½ mile to Panther Peak. Turning left leads to Couchsachraga Peak.  Couchsachraga has the reputation of being a trudge, and I wanted to get it out of the way first.


From “Times Square,” the path loses a fair amount of elevation on a rough herd path.  Numerous small ledges slow progress.  At the saddle between “Times Square” and Couchsachraga, the path reaches a bog.  Unfortunately there isn’t an easy bypass of this bog and the best path is through it.  I was able to step on downed branches and tufts of grass and never sank deeper than my shoes.  Choya seemed to have a little more difficulty and passed through up to his belly in mud most of the time in the bog.  Luckily the bog passage travels only a short distance before climbing again.

Beyond the bog, the path climbed steadily.  A couple of steep ledges make for interesting travel.  The first appeared to have a bypass with an abundance of wet roots.  I chose to travel up the slab directly.  While steep, it was dry.  Choya had no problems.  The second requires actual scrambling on a near vertical wall.  While I managed with no problems, I was shocked at how well Choya scrambled up the sketchy section like a mountain goat.


The summit of Couchsachraga stands just beyond the sketchy ledge.  A small rocky opening in the woods with a sign marks the summit.  Although you can kind of see the tops of surrounding peaks over the trees, the summit has no real views.  Since I was about half way through my day, I ate some snacks for lunch and fed Choya as well.  I chatted briefly with a group of four backpackers on the summit as well.  I discovered blood running down my leg, as well as a bloody thumb during my break.  I’m not sure when the wounds occurred, but neither seemed serious.

Couchsachraga often ranks low among 46er peaks as far as enjoyment goes.  For starters, it tops out well below the 4,000-foot threshold that gives an Adirondack peak its 46er status.  Original surveys measured the peak at over 4,000 feet.  Since then, more accurate surveys measure the peak at closer to 3,800 feet.  Despite this, to keep the 46er list consistent, Couchsachraga remained on the list.  Reaching the peak adds several hours to many people’s day.  The path to the summit is rough and slow going.  The large bog in the saddle certainly doesn’t make the peak any more attractive.

I can’t say Couchsachraga was the worst peak I ever climbed, but it’s not one I am eager to return to.  The terrain along its herd path wasn’t without any points of interest.  I actually found the ledges along the way neat.  They gave the peak a real mountain feel.  There were at least two vistas along the herd path as well.  The first offered an excellent view of the Cold River Valley and the Seward Range from along the path.  The second, just a few feet off the trail, looked back at Santanoni and Panther, as well as the route between the two.

I retraced the path to “Times Square.”  I worried about Choya negotiating the steep rock, but he managed better than I hoped.  My line through the bog wasn’t as smooth as my first time across it, and as a result, wetter.  Choya had a tougher time with my less efficient path as well.  I also took a painful branch to my left shin that was quite painful, leaving both of my legs now bleeding.


Once back at “Times Square,” the path reaches another junction called “Herald Square” marked with a cairn.  A ½ mile beyond the junction brought me to the summit of Panther Peak.  While the summit proper lacks views, just before reaching the summit, open ledges provide a nice look at the surrounding terrain to the south and west.  I took a short break at the ledges before returning to “Herald Square.”

Back at “Herald Square,” I took the path to the left, which descends back toward the Bradley Pond Trail.  The descent travels over rough terrain.  The path follows Panther Brook with sections of rough, rock hopping.  Several spots required my hands to negotiate the rocks.  As the path turns away from the brook, the terrain mellows some.  I soon passed near Bradley Pond before rejoining the actual trail.  Where the path meets the trail, the path passes near a beaver dam.  The path is somewhat obscured here, but the trail is just a few feet beyond it.

Back on the official trail, I still needed to hike another 4.3 miles to the trailhead.  After a long day on rough terrain, the last 4 miles seemed to drag.  I stopped briefly to cool off at the falls along Santanoni Brook.  After that, everything seemed to take longer on the way out.  I reached the trailhead just after 4PM.


Although I have hiked many trips of this distance and terrain many times, this day beat me up more than usual.  I was surprised by the amount of mud on the trail this late in the season.  This made the terrain even rougher than it already was.  Footing was consistently wet and slippery.  The numerous scratches, cuts, and scrapes probably didn’t make the trip any easier.

Hitting all three peaks totals around 15.5 miles.  I finished the day in a total of 9 hours and about 15 minutes.  While both Santanoni and Panther offer views that make them worth the effort, I can’t say Couchsachraga is worth the extra effort unless you are ticking away at the Adirondack 46er list.  There are much better mountains with much better scenery and a lot more to offer than Couchsachraga.  I wouldn’t want to hike this area during mud season.  For mid August, the paths were much wetter than I expected.  At least the biting insects never made their presence.