The trails and logging roads that I ride take a while until they are suitable for mt biking.  North facing trails and trails in thick woods are usually snow covered or muddy until at least April, sometimes May.  The past few week has been sunny and dry and helped dry out the trails.  With this drying weather, I decided to take my first ride of the season on Sunday.

I headed to Barnard, Maine.  There is an endless network of logging roads that is accessible from here.  Unfortunately they are poorly mapped and navigating them takes trial and error and local knowledge.  When I started my ride I didn't have a set destination in mind.  My plan was to explore roads that I never been down before to possibly find moose antler sheds.  Most of these lesser traveled trails were not muddy, but quite soft, making for some very slow travel.  I traveled probably more than five miles down these lesser traveled logging roads.  Despite many moose tracks and piles of "nuggets," I didn't find any antlers.

After striking out on the side trails, I continued down one of the main logging roads reaching railroad tracks that travel through the area.  Traveling on this road was also slow going.  Usually I travel between 10-12 MPH in this area.  Up to this point I was averaging closer to 6.

Reaching the railroad tracks is where things got ugly.  I knew there was a trail that could link me up to a familiar logging road to complete a loop.  I had an idea how to get to that other road but wasn't certain.  I took the wrong trail at this point.  The trail I chose dumped me onto the railroad tracks.  A short distance on along the tracks brought me to a sign reading "Benson" that I thought was familiar, leading me to believe I was close to my intended target.  I didn't know this was one of three signs reading "Benson" along the tracks.  This kept me on the railroad tracks for somewhere in the realm of 5-6 miles.  These tracks are in the middle of the wilderness and the ground isn't ridable.  I ended up walking most of the distance along the tracks.  In cycling shoes this was uncomfortable causing several blisters.  Walking on the large loose rocks along the tracks caused the sole of my shoe to come apart making for even tougher footing.  At least the cleat was spared from damage.

When I finally reached the trail I was looking for, I was over three hours into the ride.  Being familiar with this trail I knew I still had 15 miles to ride an it would take at least 90 minutes to get back to my car.  Normally this wouldn't be a huge problem except I wasn't anticipating the miscalculation.  I only had one energy bar with me and enough water for a three hour ride.  Luckily the last section was on a heavily used logging road in good condition and I could make reasonable time.  When I got back to my car I was out of water and extremely hungry.  It had been five hours since I started the ride and almost 35 miles. 35 miles is usually a safe distance for me in this area but not in these conditions. I was planning on three hours at the most and was unprepared for five hours of nonstop traveling.  I was nearly ready to collapse when I finally reached the car.  This was my first bike ride of the season and that didn't make the whole situation any easier.  My legs were also scratched up pretty good from thorns riding the lesser traveled roads.  I gave Puma a good scare too.  I didn't tell her where I was going and didn't have my phone with me so she assumed the worst since I was long overdo. 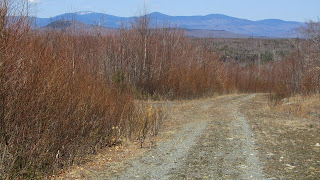 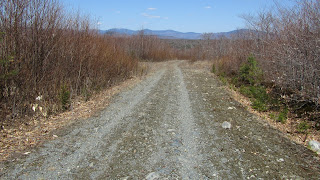 I  haven't hiked lately with mud and slushy snow being the norm.  Usually the first mountainous area in Maine to be free of snow and mud is Acadia National Park.  With a clear day forecasted I headed down to Acadia with the J Man.

We planned roughly 9 mile loop that covered Dorr, Cadillac, and Pemetic Mountains.  We started first climbing up Dorr Mountain, the third highest Peak in the park.  From Dorr, we headed over to Cadillac Mountain, the highest peak in the park passing through a gorge between the peaks.  From the summit of Cadillac we descended steeply to Bubbles Pond on the West Face trail.  In my opinion the West Face trail is one of the hardest trails in Acadia without ladders.  It is steep and ledgy and tends to be wet which makes for challenging footing.  From Bubbles Pond we climbed to the summit of Pemetic Mountain,  Acadia's fourth highest summit.  Pemetic is a beautiful summit with a long exposed ridge with dramatic mountain and ocean views.  It is one of the nicer hikes in Acadia in my opinion.

The trail loses most of its elevation descending from Pemetic.  We then climbed steeply up rough, rocky trail on the Pond and Cannon Brook Trails to the south ridge of Cadillac Mountain reaching a small pond called the Featherbed.  We had lunch at the Featherbed listening to a chorus of frogs.  Most of the trip is downhill from the Featherbed following Cannon Brook.  Cannon Brook flows steeply down the mountain and has several small scenic waterfalls along its length.

The trails were wet but not muddy.  Early in the morning there was a few patches of ice on the rocks but they melted quickly.  Only a few sheltered areas at higher elevations had snow remaining.  I don't think we had to walk over more than a few feet of snow along the trails however.  Although chilly, temps only reaching the upper 40s with gusty summit winds, the day was gorgeous with endless visibility.  It was good to hike on snow free ground for the first time since early November.  For the first six miles we only saw two people.  At the end of the hike near the parking lot there was a few more people but we had the summits to ourselves.

For a map and more info go to http://www.backpacker.com/destinations/hikes/55560 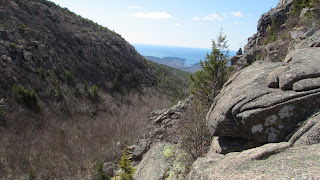 Looking down The Gorge between Dorr and Cadillac toward the ocean 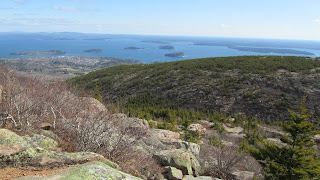 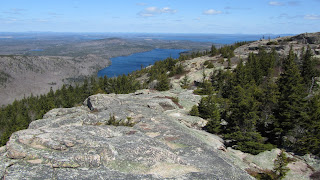 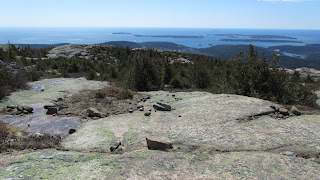 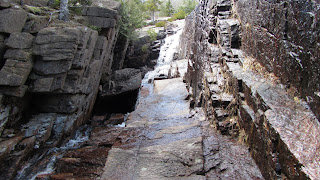 Spring is not my favorite season in Maine.  Hiking is hit or miss due to mud and ever-changing snow conditions.  Snowshoeing is still possible at elevation but most trails require travel on dirt roads which are in rough shape due to mud.  Mountain biking is still a little bit off due to excessive mud and lingering snow.  Most lakes are still choked with thick ice.

The last of the ice melted in our local river this week.  By mid summer the Piscataquis River usually doesn't have enough water to paddle efficiently unless it is a rainy summer.  Now the river is flowing strong so Puma and I decided to take advantage of this and get an early start to the paddling season.  Puma wanted some adventure the day after her birthday.

We typically kayak an eight to ten mile stretch of the river from the town of Guilford to our town of Dover Foxcroft.  Most of the trip is relatively tame but there is a handful of rapids breaking up the slower stretches. In high water the heaviest rapid is a choppy, wavy class II. The rest of the rapids are pretty straightforward.  At lower water levels the river tends to be rockier presenting different challenges.

Today the river was flowing high and fast.  It was wetsuit weather though with temps in the mid 50s and a strong wind.  There was still patches of snow along the banks of the river at places and even some lingering ice at a couple spots in the water.  There is always some wildlife sightings along this stretch of river.  Today we saw too many ducks to count, a few bald eagles, and a few loons.  This is the earliest we have been on the river. 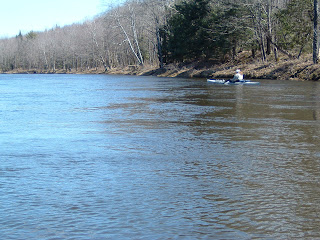 Puma in her kayak 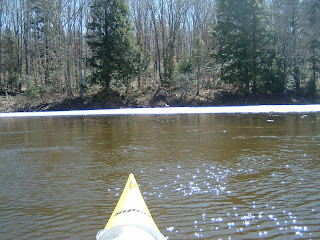 Ice on the banks 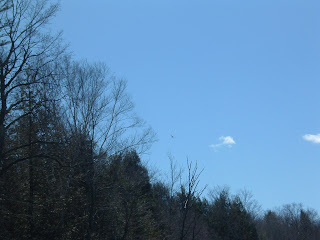 Hard to see but there is a bald eagle visible above the trees, left of clouds if you click on the pic 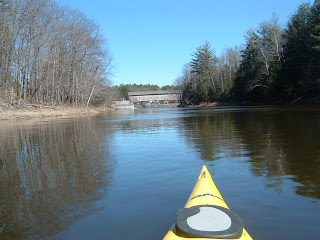 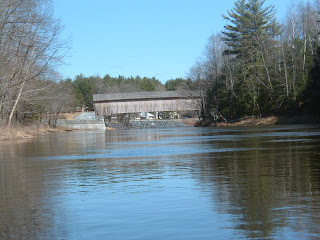 Posted by TOMCAT at 5:12 PM No comments: