I began backpacking in the 1990s.  My first outings were terribly equipped overnight trips on the Appalachian Trail in Pennsylvania where I grew up.  Fast forward to 1998, With no other ambitions, I got a whim to hike the entire Appalachian Trail.  In the winter of 1999, I acquired better gear and started planning.  March 21, 1999 I set off from Springer Mountain in Georgia and began life as Tomcat.

In 1999, the backpacking world wasn't the same as today. My AT trip planning began by contacting the Appalachian Trail Conference (now Appalachian Trail Conservancy) by mail to get trail information.  I ordered the entire AT guide and map set as well as a Thru Hike planning workbook.  I read as much about the trail as I could.
Most of the gear I used is still available today, but would look out of place among current long distance thru hikers.  My Lowe Alpine Contour IV pack was cavernous with a 90L + 10L volume and clocking in around 6 lbs.  My tent and sleeping bag both clocked in under 3 lbs each, which were fairly light for the time.  I wore two pairs regular hiking boots, not trail runners which are much more common today.
I set off from Amicalola Falls State Park in Georgia on the approach trail to Springer early morning March 21, 1999.  The first days were rough.  Trying to save money, I tried to limit mail drops and carried 10 days out of the gate leading to a pack over 50 lbs.  140 days later on August 7th, 1999, I reached the summit of Katahdin.
After the AT
In the following years I covered sections of the Colorado Trail and PCT as well as other shorter multiday and overnight hikes.  I went back to finish college, left Pennsylvania for Maine and soon dropped out of backpacking for a five or six year timeframe before I got the yearning to backpack again.
My next trip was a relatively new and underused trail in Northern New Hampshire called the Cohos Trail in 2009.  The Cohos travels about 165 miles from Crawford Notch to the Canadian border.  I added a traverse of the Northern Presidential Range to bag a few of the higher peaks that the Appalachian Trail bypasses, bringing the total distance to 185 miles.  The trip went wonderfully and I was ready for more.
After a few smaller trips, my next longer hike was the Long Trail in Vermont.  Unfortunately Mother Nature's plans differed from mine.  About a month after Hurricane Irene in 2011, I hit the northern terminus of the LT.  I had a decent start, but soon the rains came.  The trail was already saturated from the biblical rains of Irene.  The next 8 days, the rain barely let up.  I was aiming for a fast two week thru hike.  Unfortunately my feet took some brutal abuse covering that mileage while saturated.  Due to my pulverized feet and the continuing rain, I called it quits at 190 miles.  I made it south of Killington.  I didn't technically thru hike, but I did officially hike all the LT, having completed the southern 80-90 miles on my AT thru hike.
A couple years after the Long Trail trip, I started Tomcat's Outdoor Adventures and most of my overnight and longer backpacking trips can be found below.  Click on any of the trips to read about the outing.
Colorado
Backpacking the Weminuche Wilderness
Backpacking the Maroon Bells- Snowmass Wilderness
Backpacking the West Elk Wilderness
Backpacking the Dominguez Canyon Wilderness
Backpacking the Uncompahgre Wilderness
Backpacking the Collegiate Loop 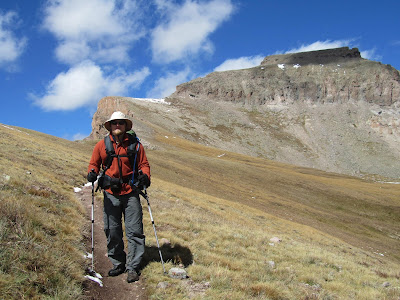