Winter is in now full swing in Maine.  I have hit the trails a handful of times already to cross country ski.  The J Man suggested we go downhill skiing this weekend.  A great place to start the ski season in Maine is Black Mountain.

Black Mountain Ski Resort in Rumford, Maine is a somewhat obscure ski area.  Outside of Maine it is relatively unknown.  As far as ski areas in New England go, it is not a big resort.  There are only 35 trails and glades and two chairlifts.  It does have nearly 1400 foot of vertical drop however, making it the fourth highest lift served vertical in Maine.  Perhaps the greatest draw to skiing Black is its price.  Lift tickets are an amazingly low $15 all day, every day.  This has to be one of the best skiing values anywhere. 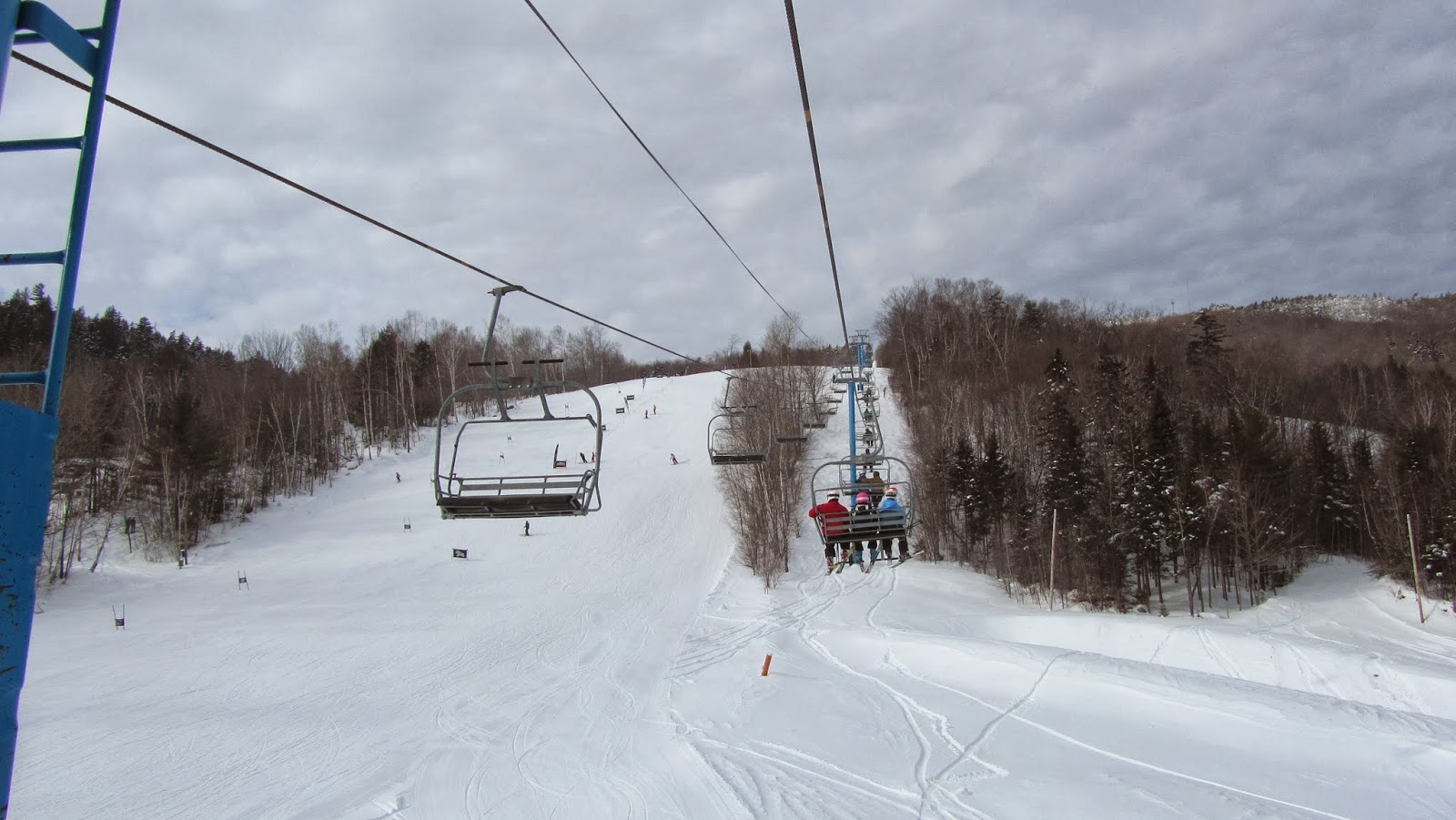 Riding up the summit chairlift

There is a solid mix of green, blue, and black runs at Black Mountain.  Most of the black runs don't ski too difficult.  Kennebago is one of the more challenging trails.  It is a relatively short trail without too steep of a pitch but probably the most narrow trail at Black Mountain.  Webb and The Dead are probably the steepest trails.  The double diamond  Dead is the more challenging of the two with a steep pitch and no grooming making for a fun but relatively short natural trail.  Sticky runs under the lift for a short distance and has no grooming and provides a nice change of pace from the groomed runs.  Most of the other black trails would probably be rated blue at a bigger mountain.  To see the trail map click on the link  http://www.skiblackmountain.org/images/maps/Black-Mountain-Alpine-Trail-Map.pdf 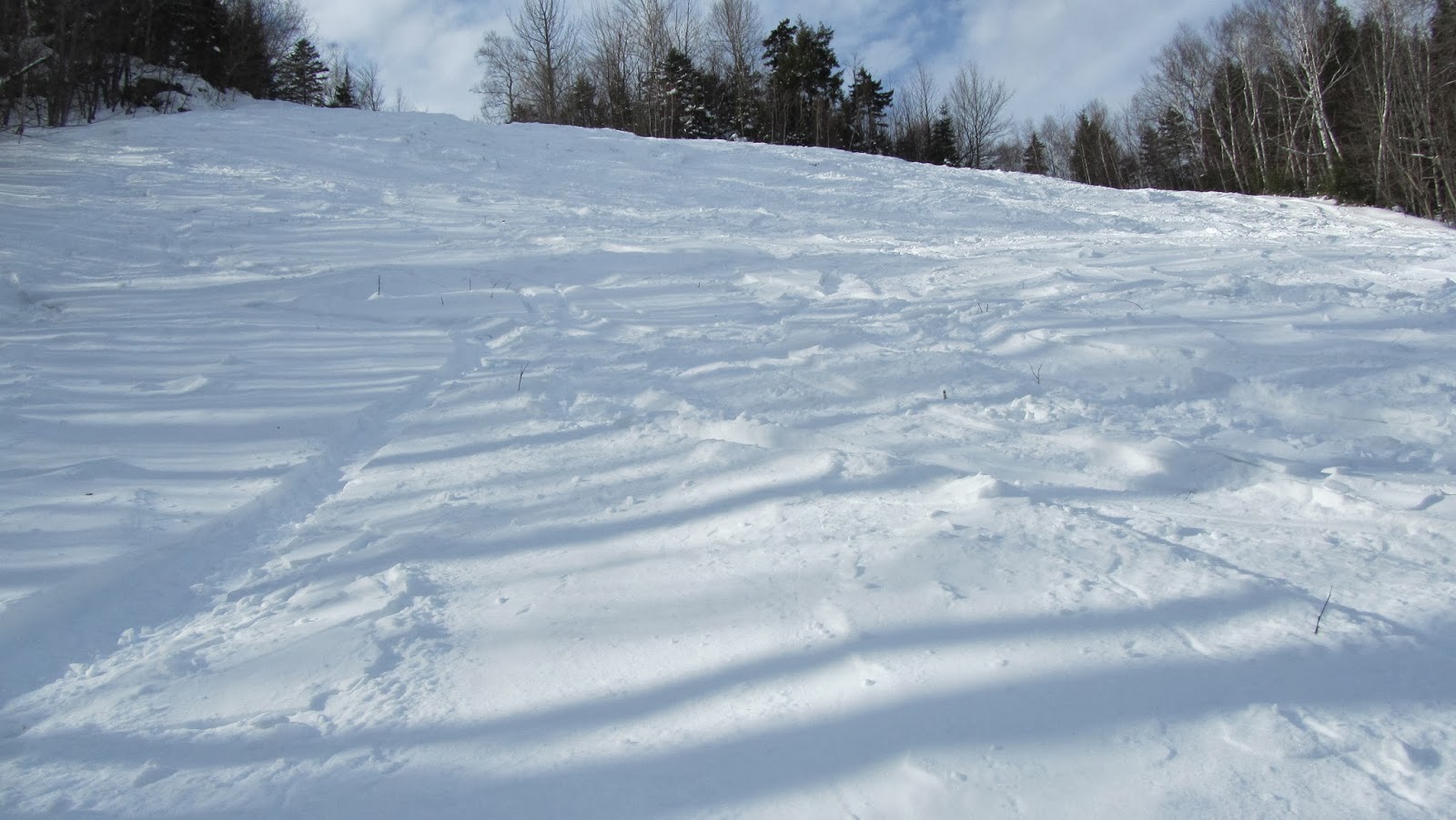 Looking up The Dead.  It's hard to see but it has a good pitch and fairly deep powder.


I only skied two glades.  The unmapped Allagash glade has a shallow pitch with wide tree spacing making it a good choice to skiers new to skiing the trees.  Swift glade is a longer glade with tighter tree spacing and a pitch that gets steeper the longer you ski it.  Some of the other glades that I didn't ski looked fairly tight and steep. 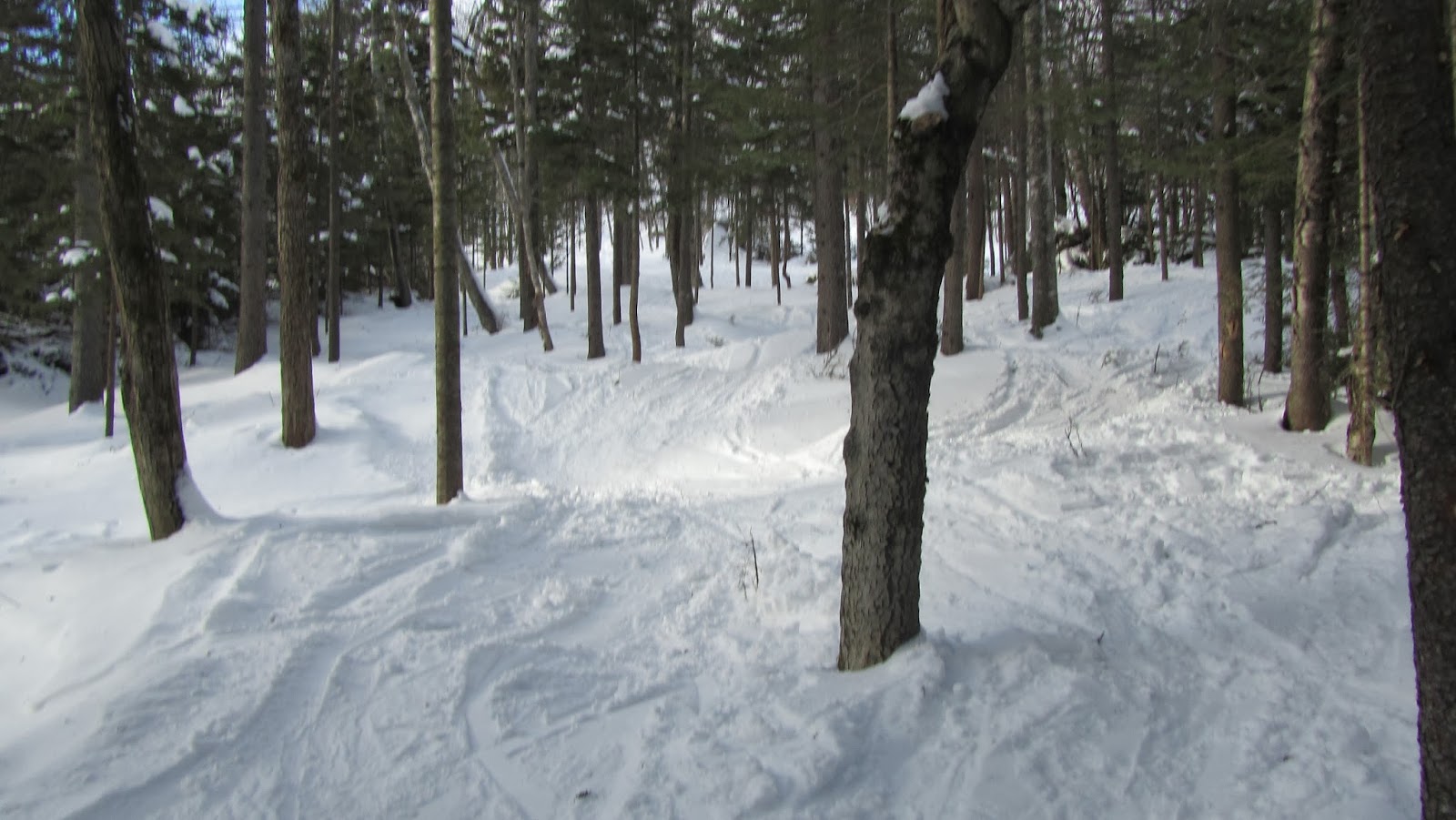 Most of the mountain has solid intermediate terrain.  Allagash winds a mile down the ski area boundary  from the summit to base.  It's a nice cruising run to warm up or wind down the day.  All of the trails accessible from the summit chair are rated blue or black.  The main summit triple chair travels from base to summit so every run offers a solid vertical run of nearly 1400 feet over a nice mix of intermediate terrain. 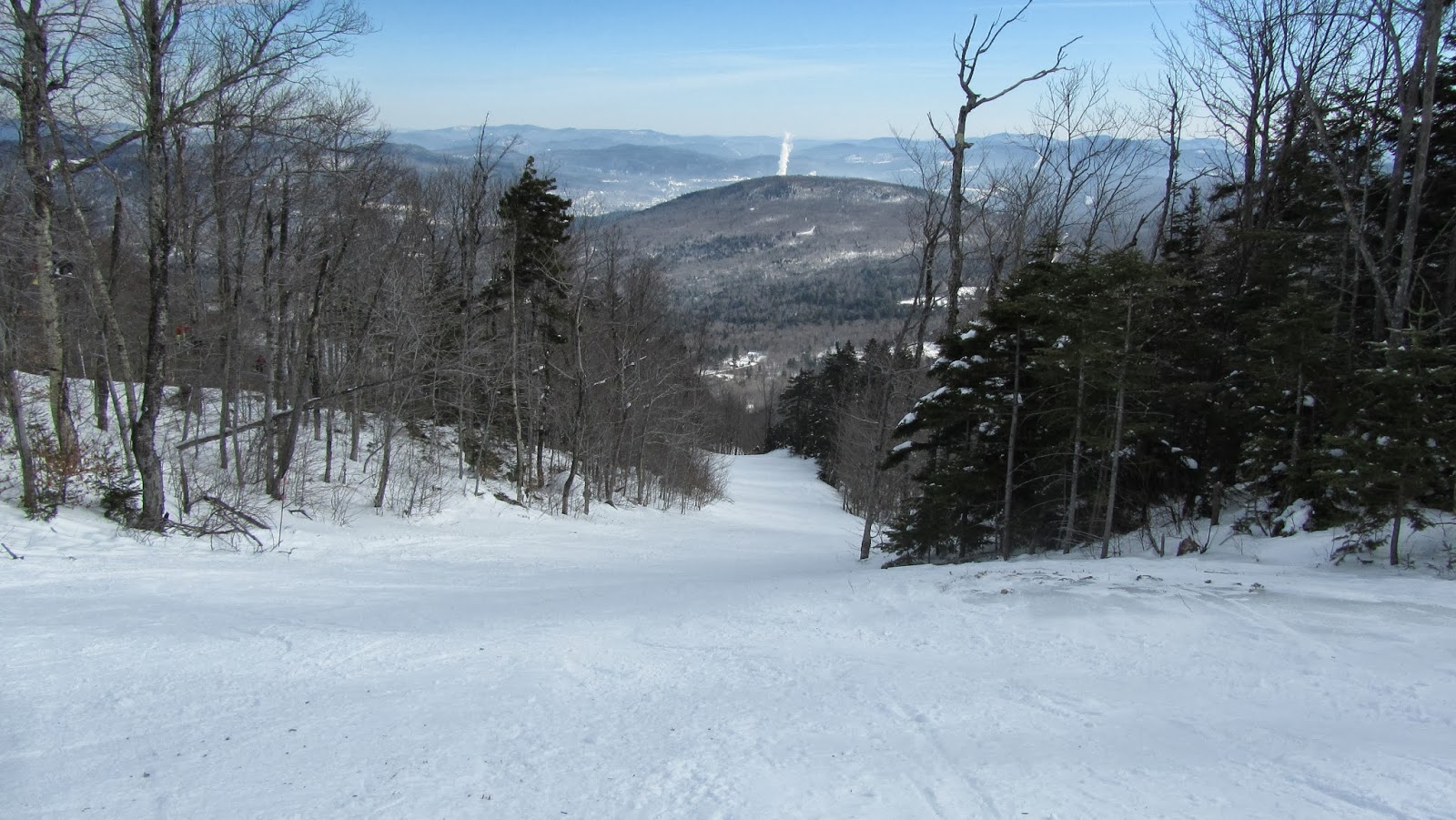 Like I said, Black Mountain isn't on too many people's radar.  If it wasn't for the $15 lift ticket, I would have overlooked myself.  The past two winters I have skied Black.  With regular ticket prices at the bigger Maine resorts of Sunday River and Sugarloaf running over $80, it's refreshing to find a value like Black Mountain.  Sure the bigger resorts have much more terrain, but for its price, Black Mountain is a steal in an increasingly expensive sport.  If you are a Maine skier and haven't skied Black yet,  I highly recommend it.  You will get a decent day of skiing at a great price. 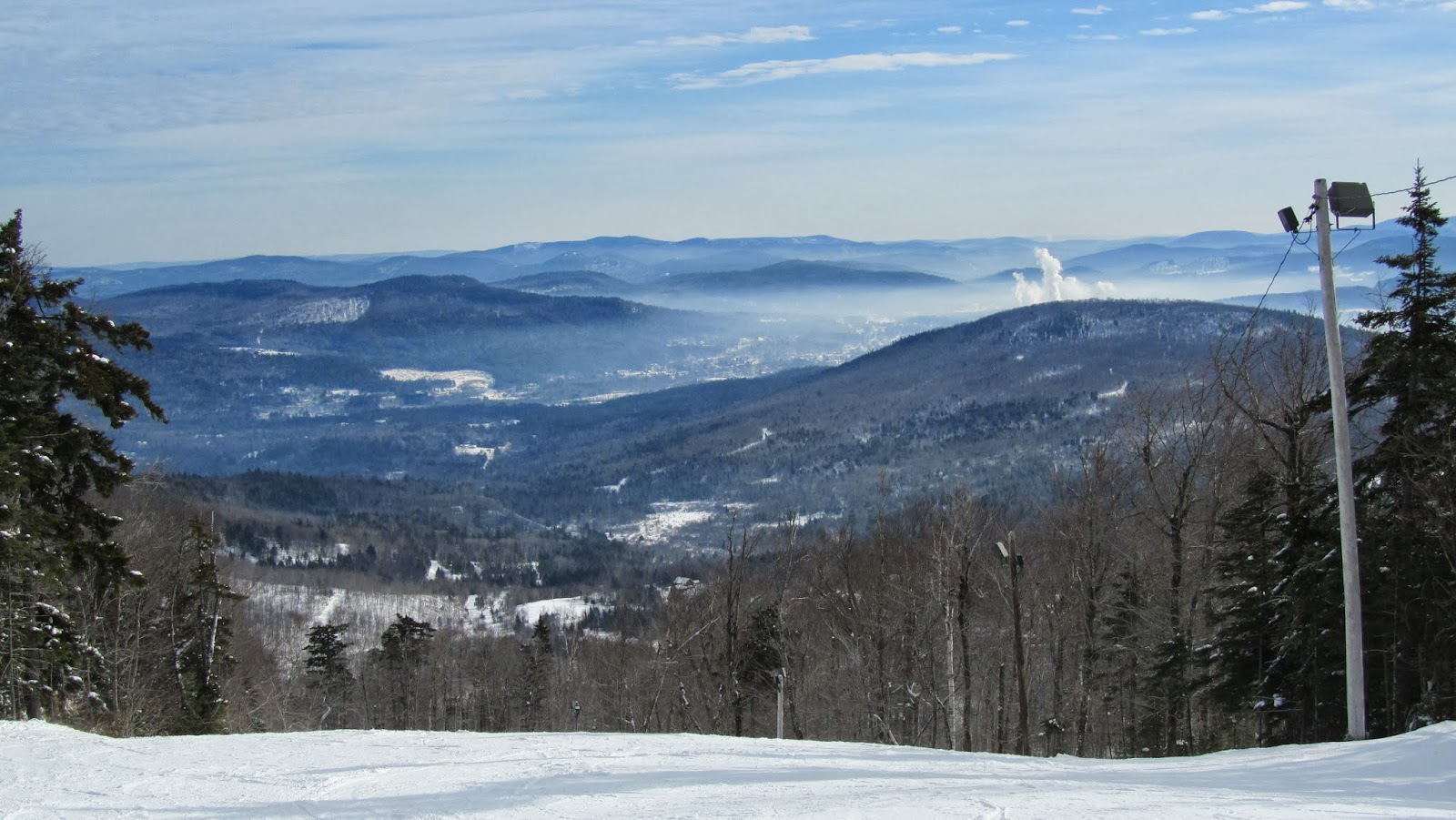 View getting off the summit chairlift

Value isn't the only reason to ski Black Mountain.  Despite the cheap prices, the place never gets crowded.  I've skied there the past two seasons, both times on a Sunday and there has never been more than a couple chair wait to ride the lift.  The terrain is expanding too.  They are continually cutting more glades and even starting to cut new trails.  The new trails were not open yet.  They appear to be opening soon as they had signage in place and the access to the new terrain roped.  The trail map also shows the future expansion.

Black Mountain was nearly lost.  This past summer the mountain lost funding and ceased operation.  Due to interest of the ski community close to the mountain, fund raising campaigns saved the mountain.  This is one last reason to ski Black.  It would be a shame to lose this ski area for good.  For more on Black Mountain see its website at http://www.skiblackmountain.org/.