I have been mountain biking quite a bit the past month.  I haven't hiked since early August.  After the long break from hiking, I was ready to hit the mountains on foot.

Since I moved to Colorado, all of my hikes have been in the Sangre de Cristo Range since they were the closest mountains to my house.  I have since moved closer to Salida and the Sawatch Range.  While there are 14000 foot peaks (14ers) in the Sangre de Cristos,  I never climbed them.  All of the hikes I did were among the 13000 foot peaks (13ers).  Most 13ers have only a fraction of the traffic that 14ers see and are often just as majestic and equally challenging so I was content exploring them.

After three months of living in Colorado, I finally decided to climb some 14ers.  The western skyline of Salida is dominated by the Sawatch Range.  The mountain that is most prominent from town is the 14229 foot summit of Mt. Shavano.  Shavano and its neighbor, 14155 foot Tabeguache Peak, are about a mile apart and are often climbed together in one hike.

I started from the Mt Shavano trailhead about 630AM before the sunrise.  There was plenty of twilight to start without a headlamp.  After a few minutes on the Colorado Trail, I began climbing the Mt. Shavano Trail.  The trail started out somewhat rocky but it didn't stay too rocky very long.  After a couple miles in the forest, I reached treeline fairly quickly.  Once I reached treeline I could see the trail make its way gradually to the saddle below Shavano.  The trail never seemed too difficult or steep.  I saw several sets of bighorn sheep tracks and scat along the way but unfortunately no sheep. 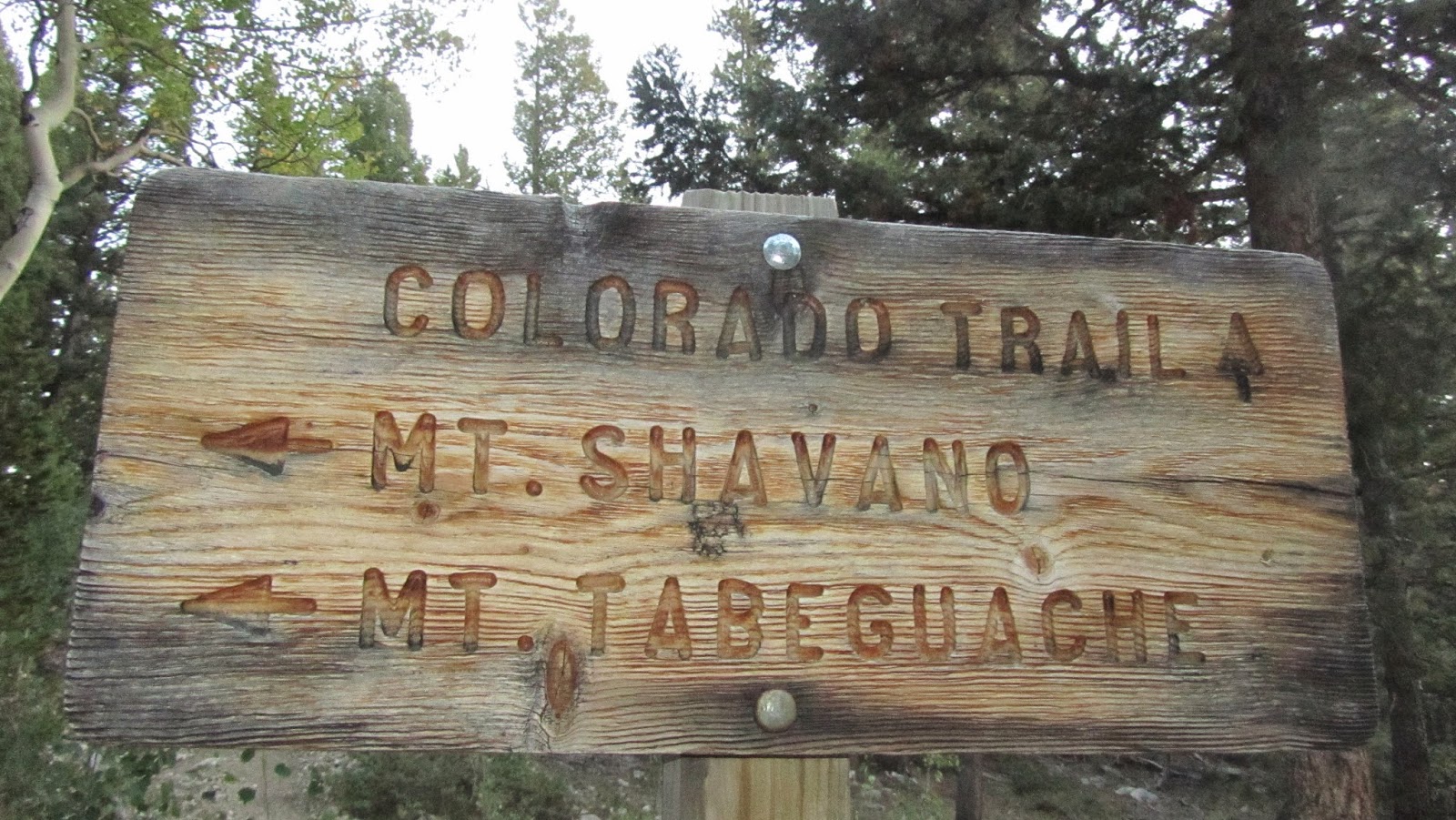 Start of the Mt. Shavano Trail 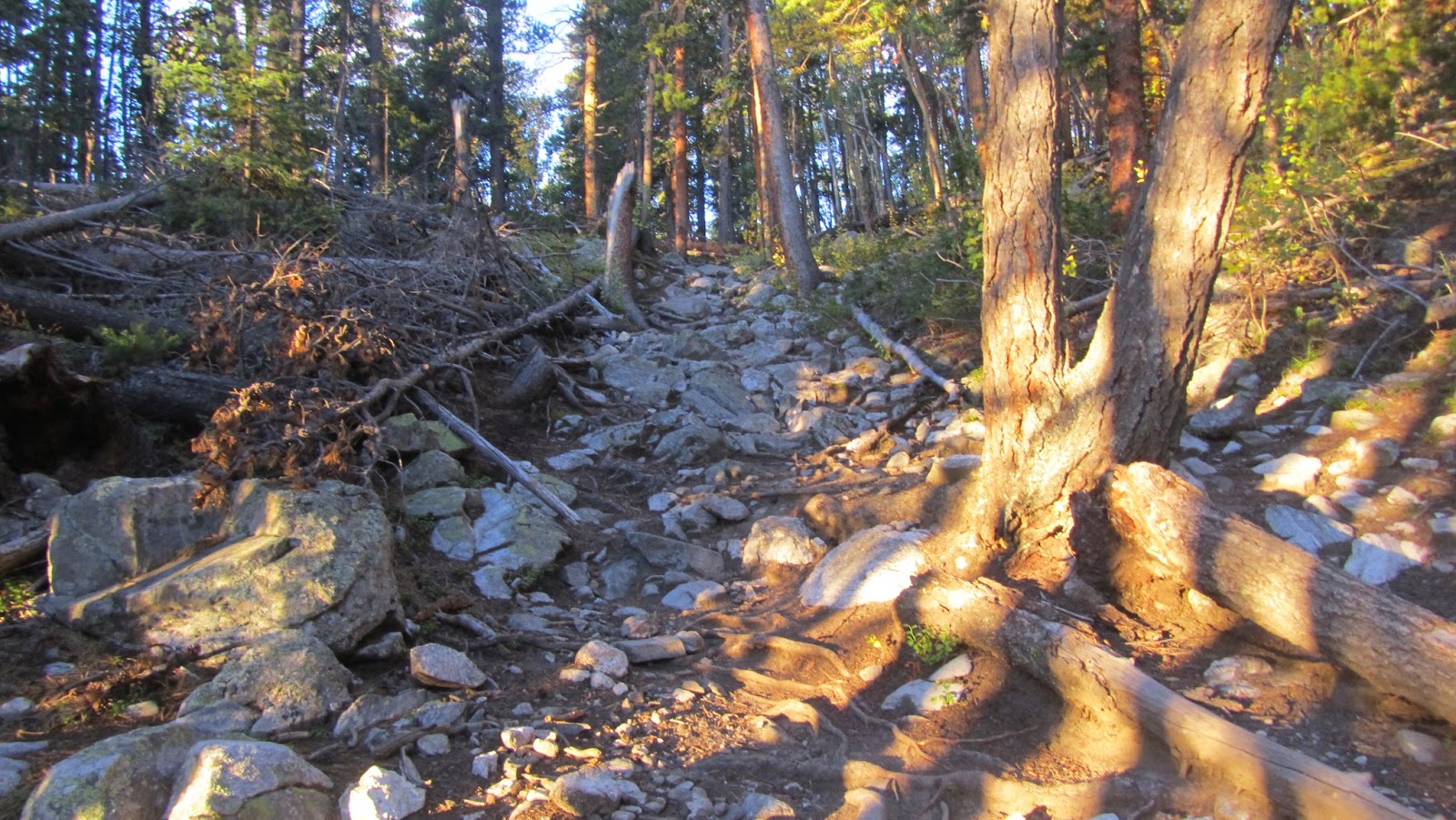 The trail starts out rocky 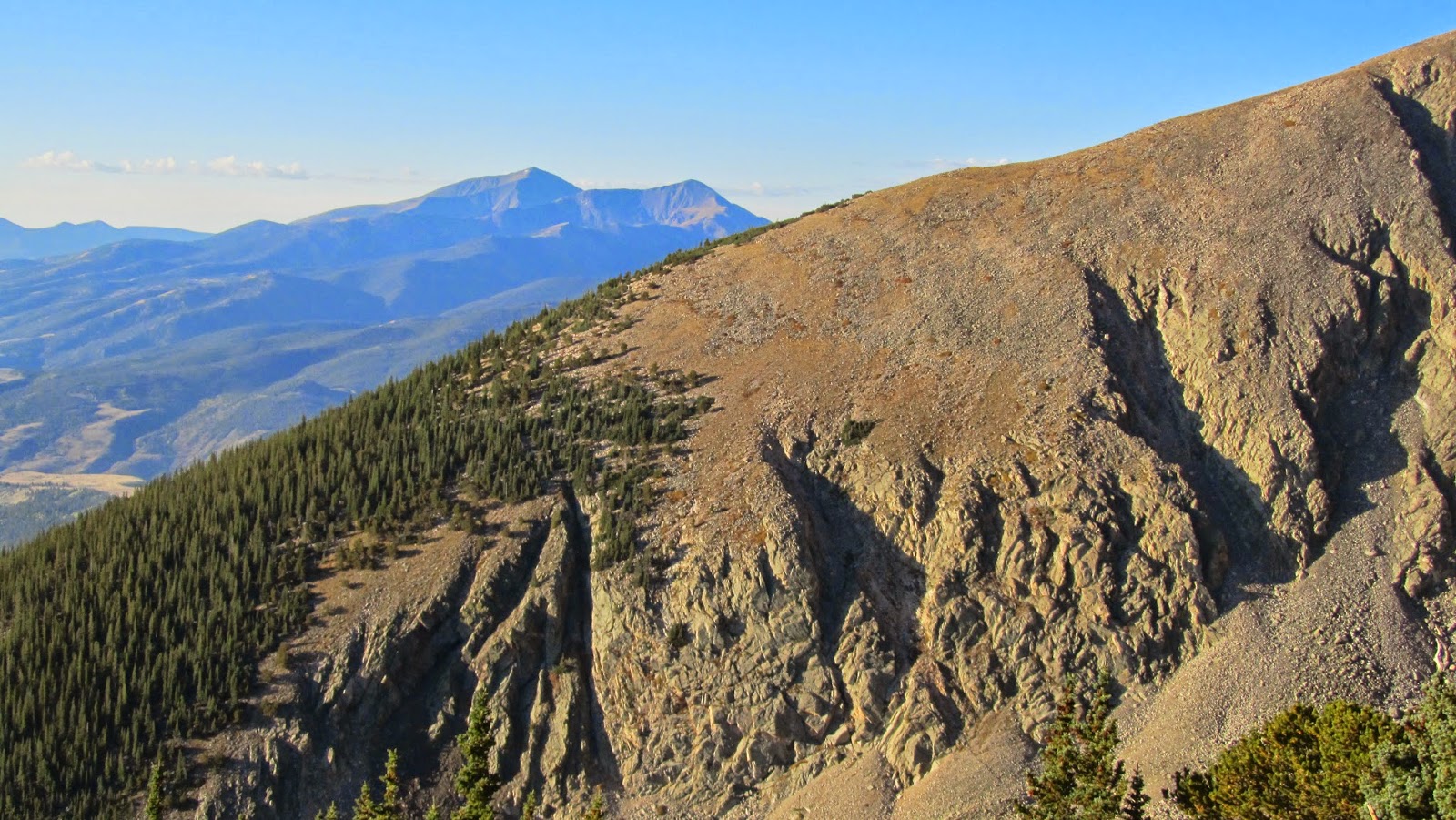 Mt. Ouray in the distance 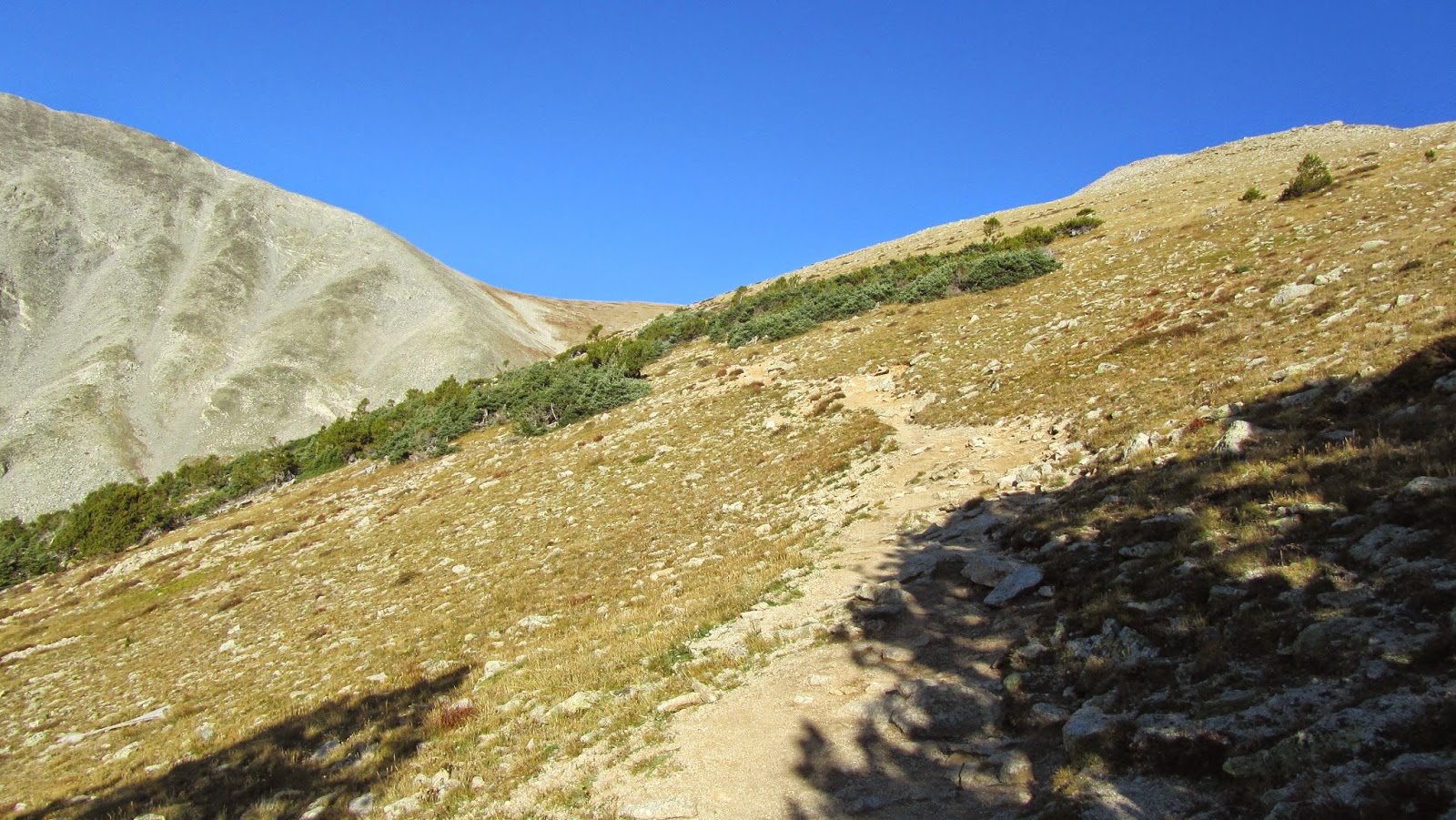 Breaking out of the trees 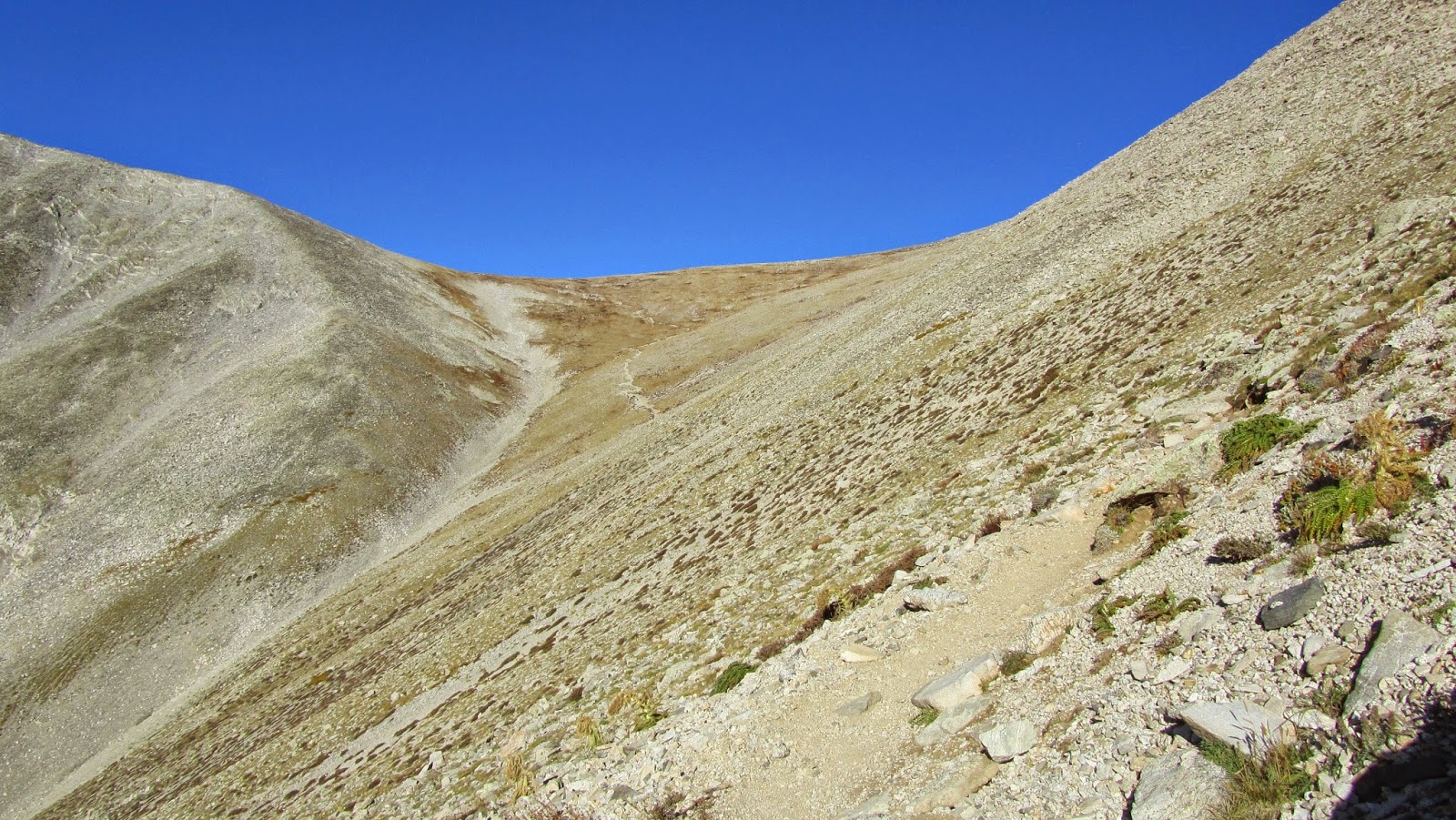 Headed toward the saddle

From the saddle, the trail becomes more challenging.  Upon reaching the saddle I started to feel some chilly wind and was glad I added a hat and gloves to my pack at the last minute.  Initially the trail crossed a nice grassy section of tundra.  After a brief section of flat trail, the rocky and steep pitch to the summit began.  Looking at Shavano, there are paths visible up the rocks.  The paths seemed to fade away at places and join other paths in other places.  They weren't official trails as much as herd paths.  From the saddle, the final pitch to the summit gains about 700 feet or so.  In less than five miles, I gained 4600 feet in elevation and was standing at 14229 feet in just over two hours.  Despite the elevation gain in a relatively short distance, the climb never seemed to difficult except for the final rocky pitch above the saddle. While that final pitch was steep and rocky, breathing the thin air at 14000 feet while climbing is the biggest challenge.  I didn't see any people on my hike to the summit.  When I reached the top, I had the summit to myself. 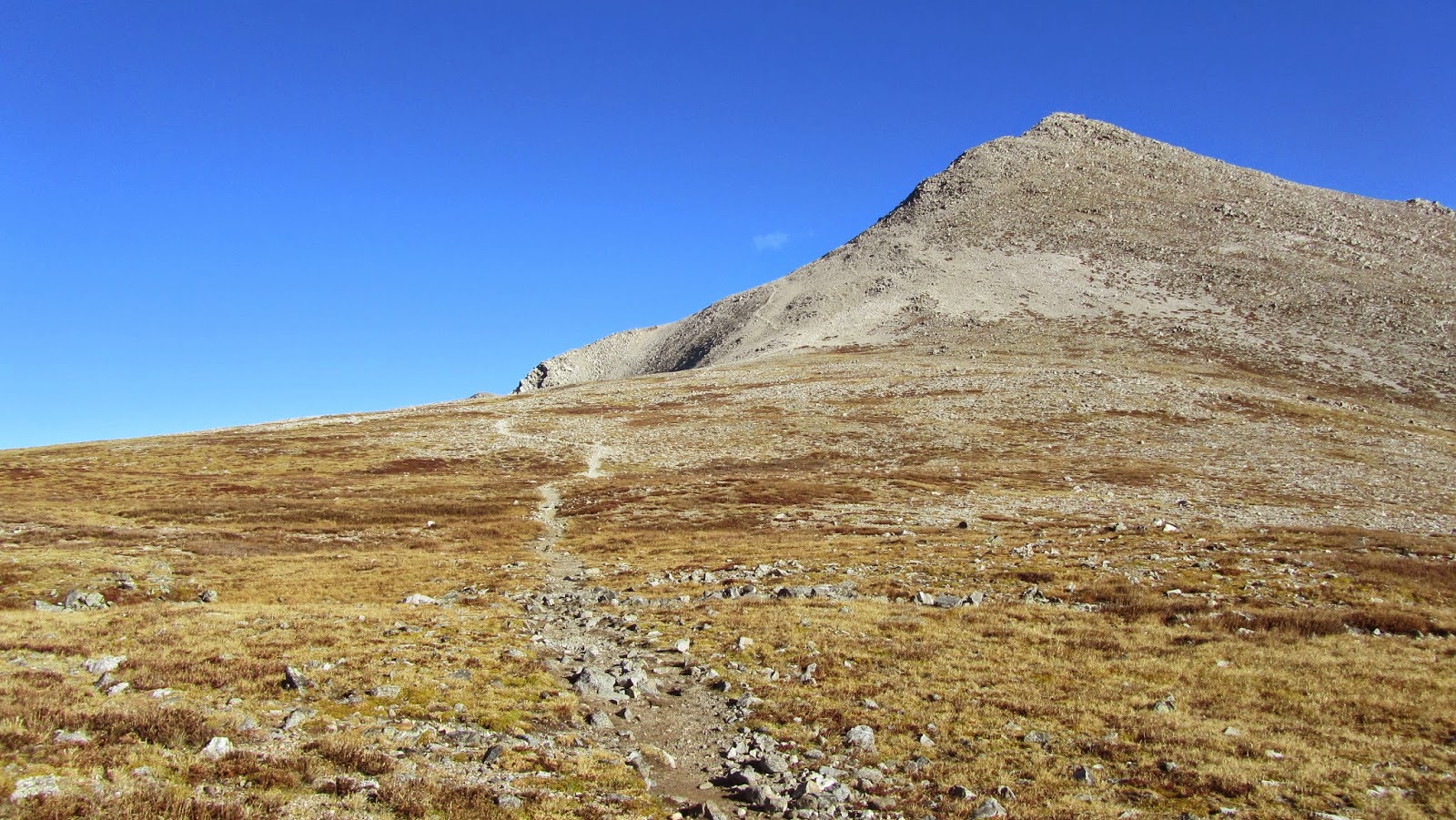 Shavano's summit above the saddle 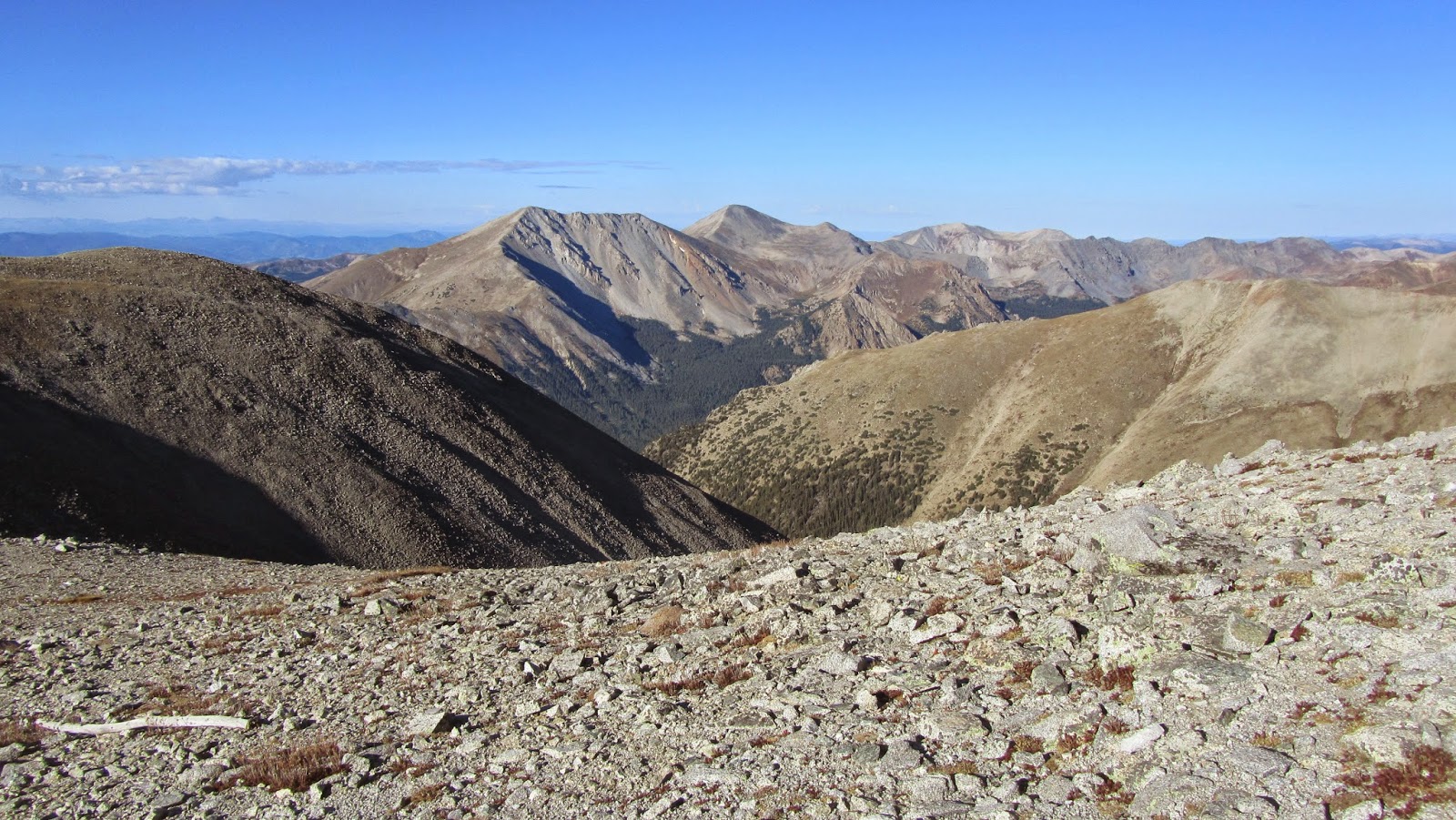 View west from the saddle 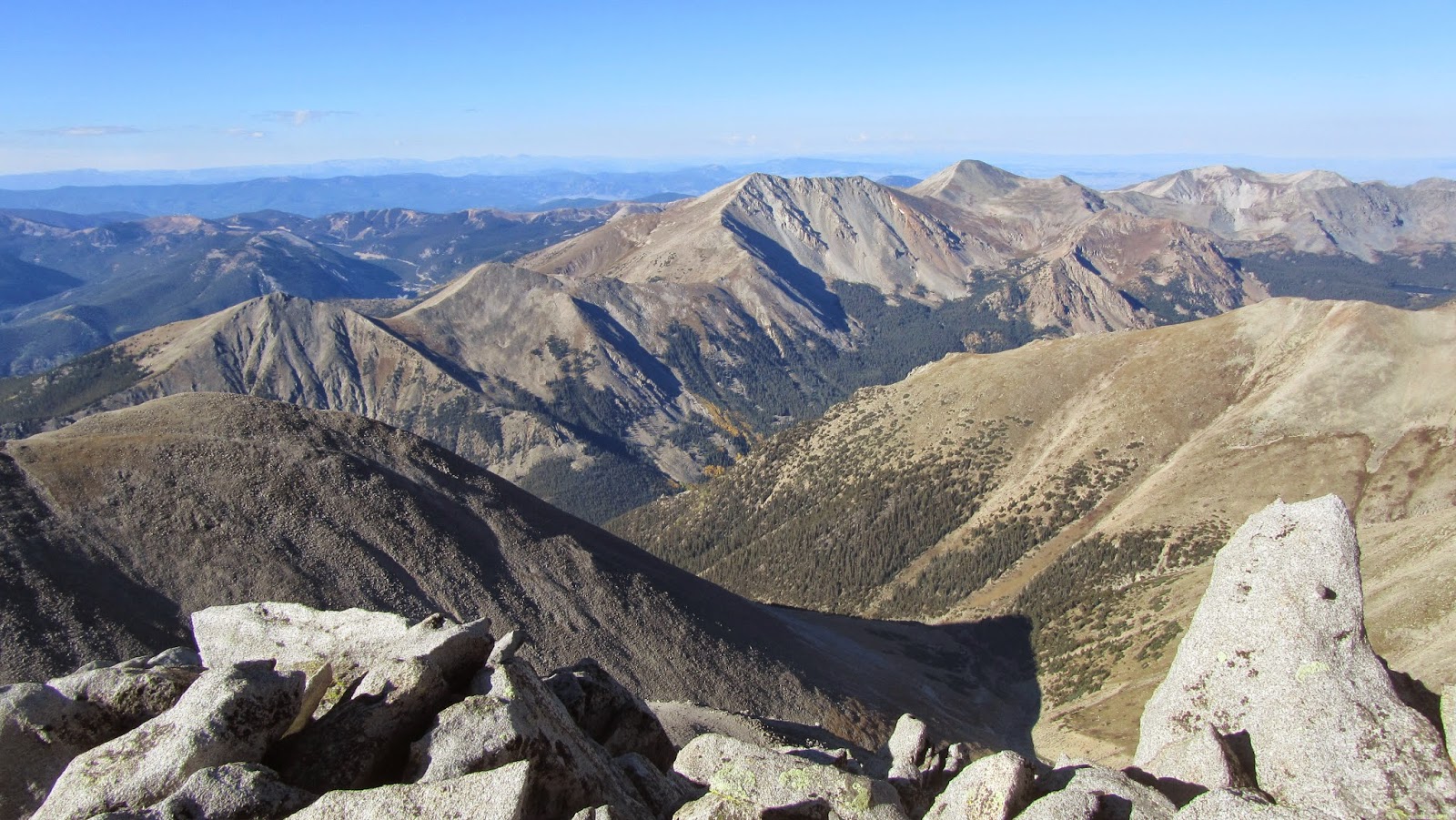 The views got bigger as I climbed 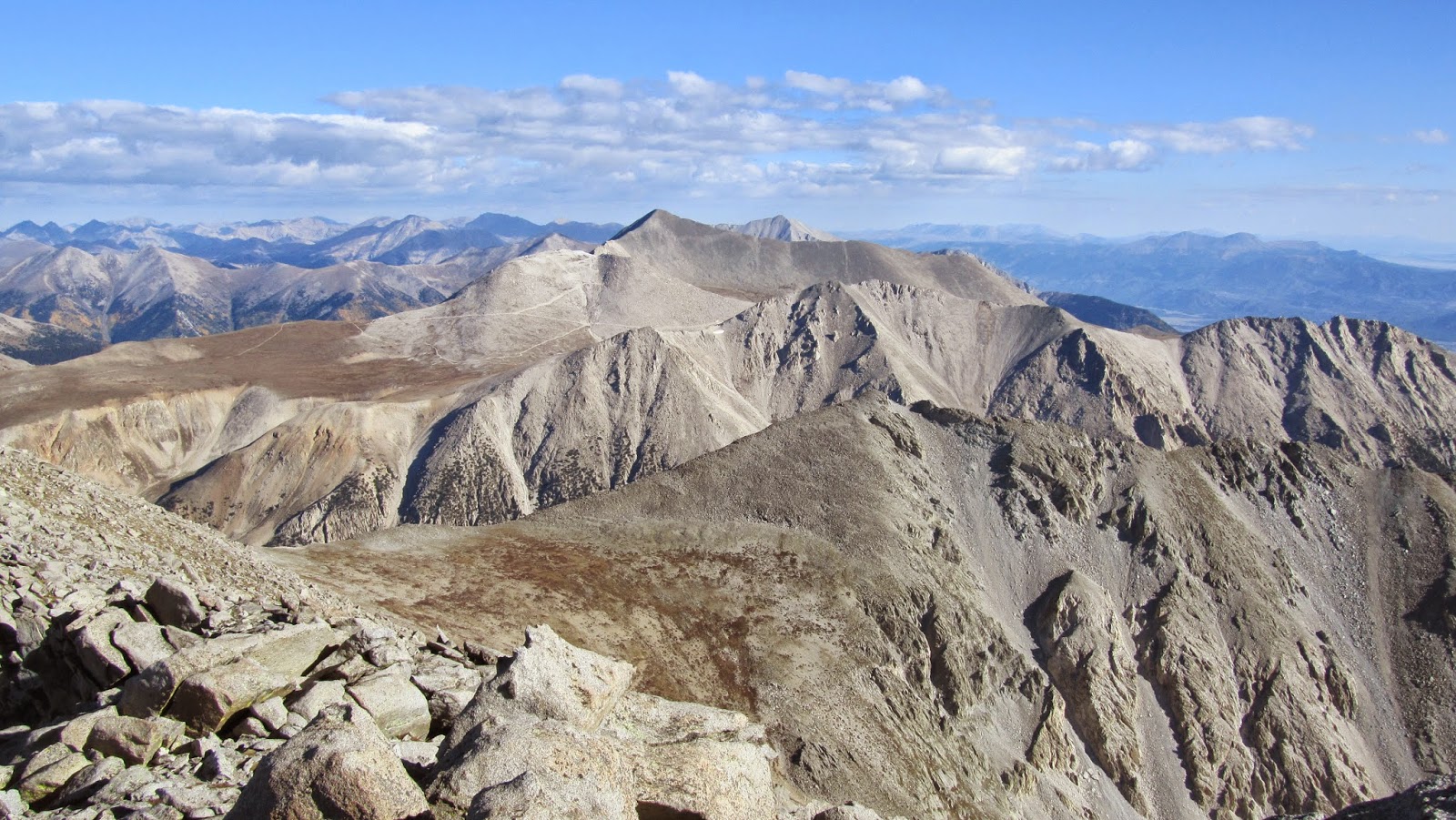 Looking north over Jones Peak toward Mt. Antero
with Mt. Princeton poking out behind it near Shavano's summit

From the summit, I descended Shavano toward Tabeguache Peak.  The descent followed the northwest ridge of Shavano.  The ridge leaving the summit was not as steep as the pitch I climbed to the summit although it resembled a knife edge in places.  The knife edge can be avoided in most places however by hiking just to right of it.  Occasionally there was a herd path to follow on the way to the saddle below Tabeguache but the paths never seemed to last long before fading.  Route finding however was easy with good visibility. The route dropped 600 feet in .6 miles on its way to the saddle between Shavano and Tabeguache. 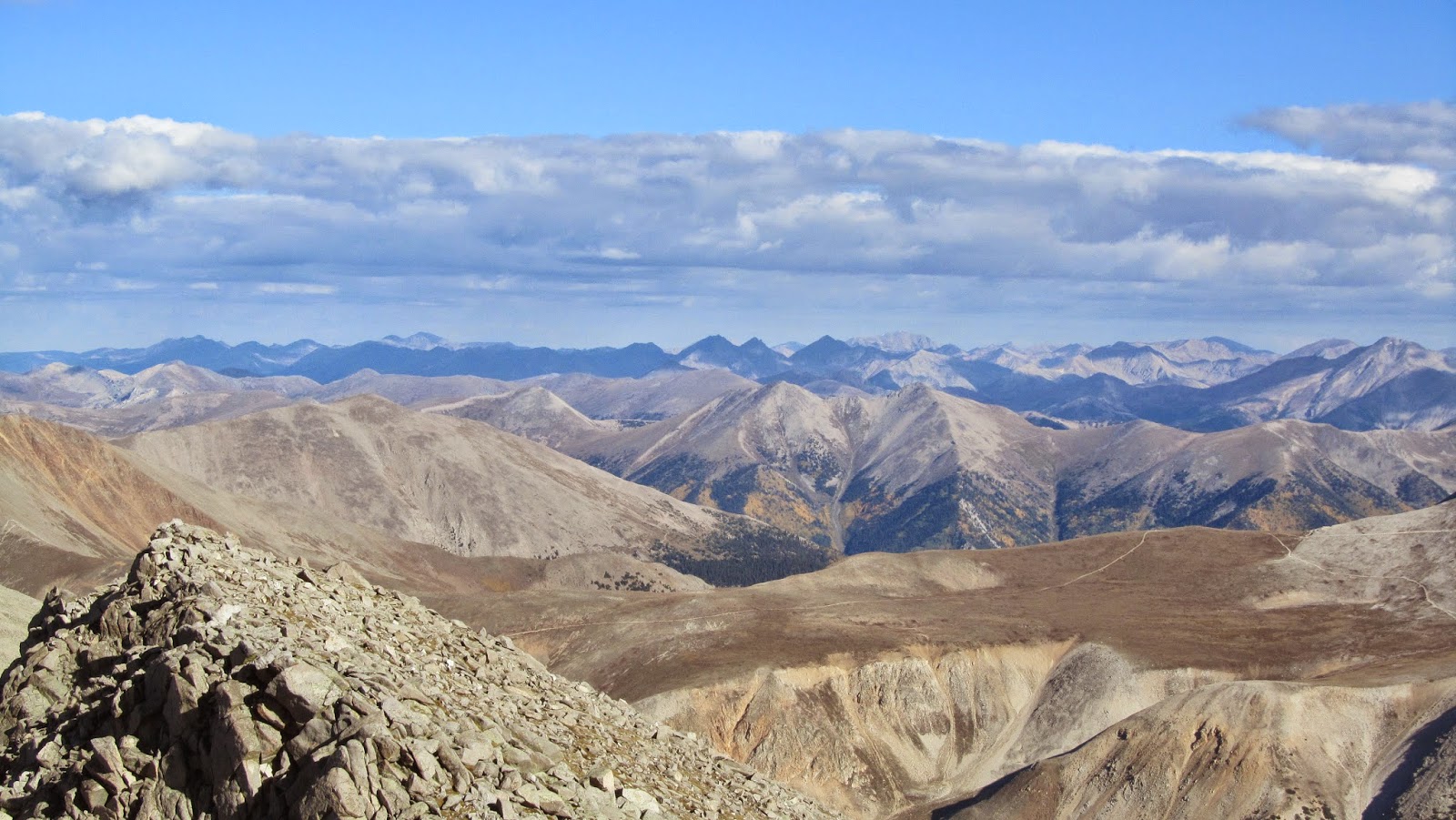 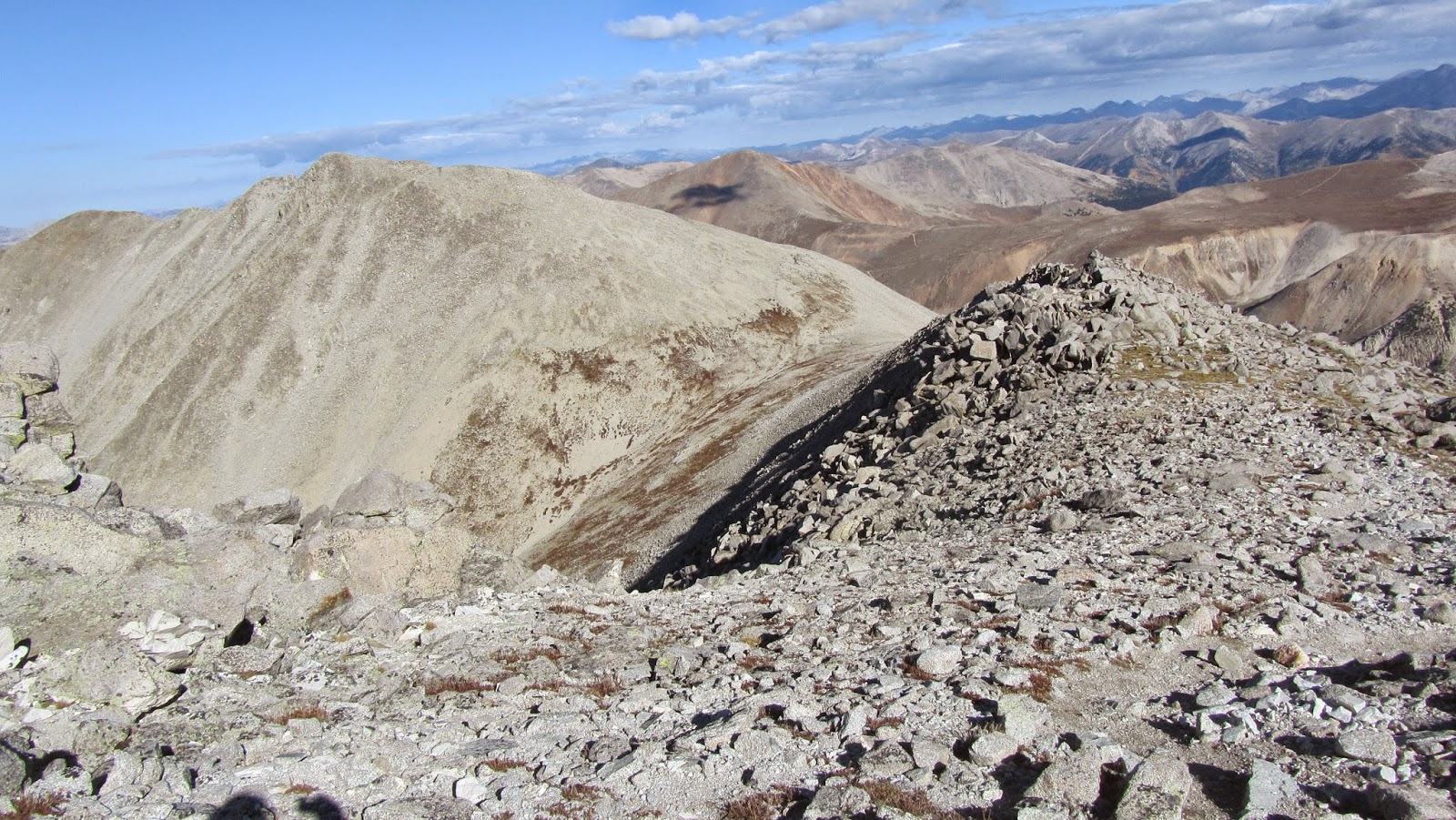 The climb to Tabeguache's summit is similar to that of Shavano.  The route becomes steeper and rockier.  Numerous herd paths and a few cairns mark the way.  Just follow the steep ridge up and you'll eventually reach the summit which is only .4 miles and 500 feet above the saddle.  Once again I had the summit to myself where I enjoyed the views while eating a snack. 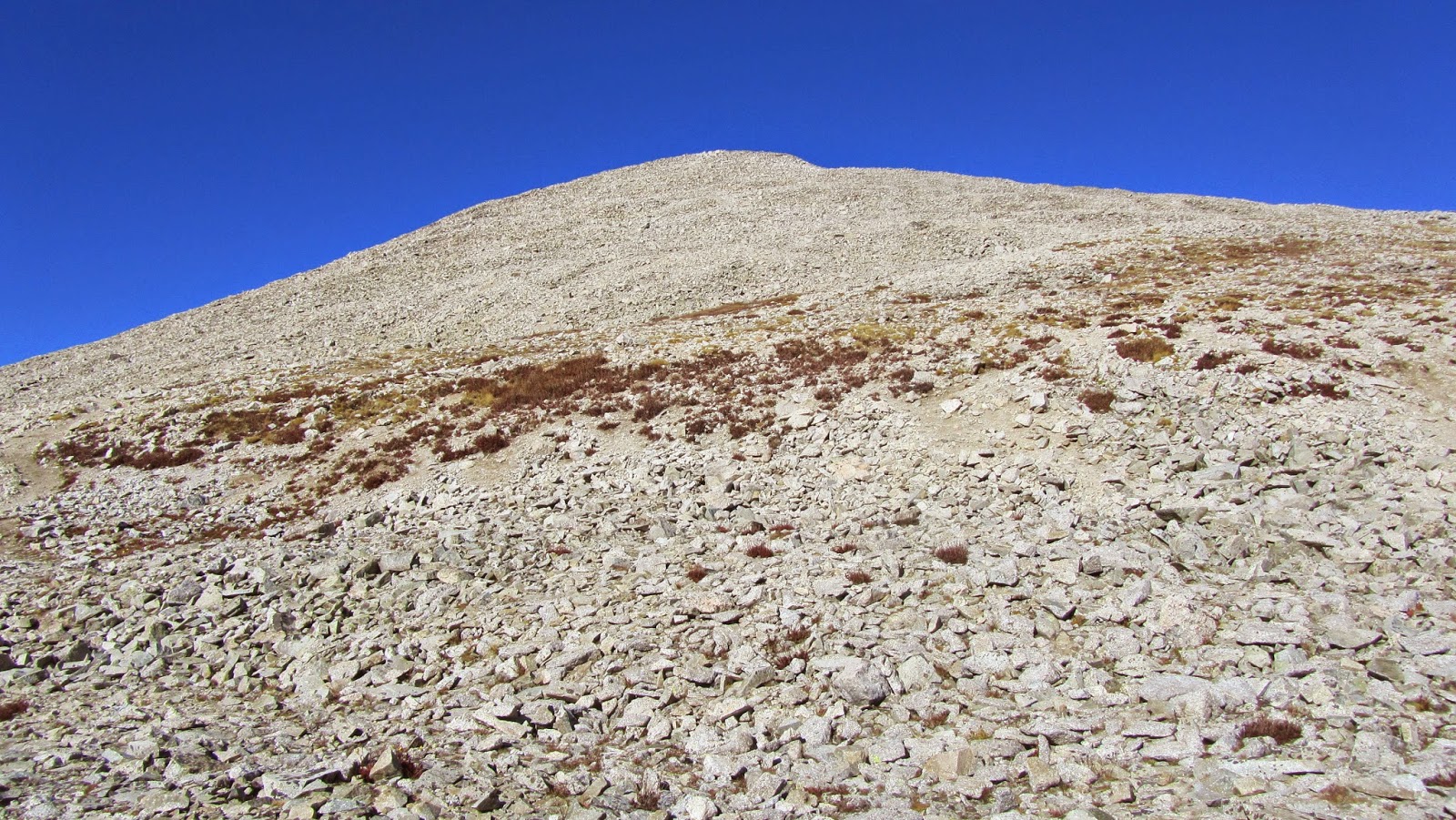 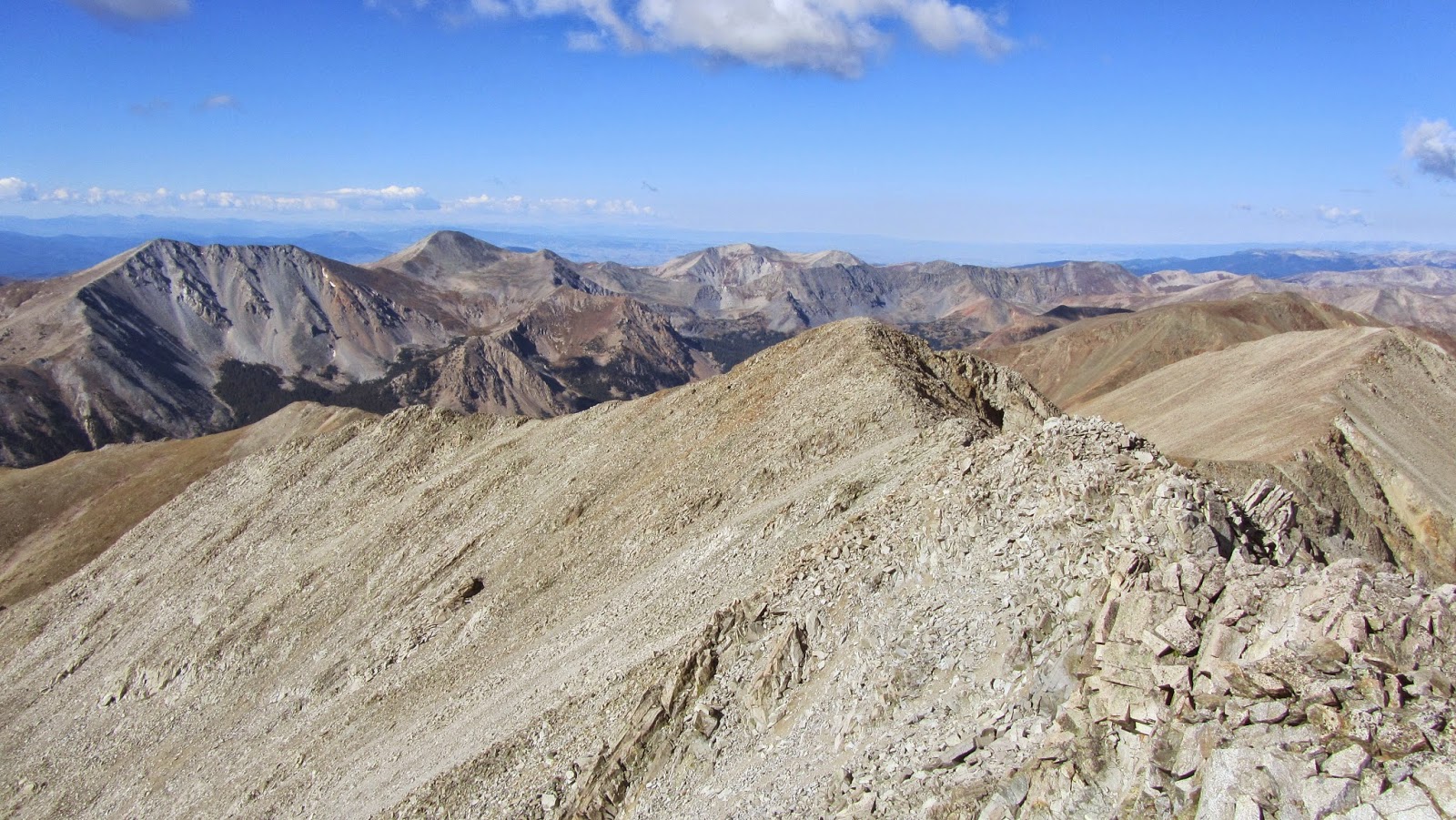 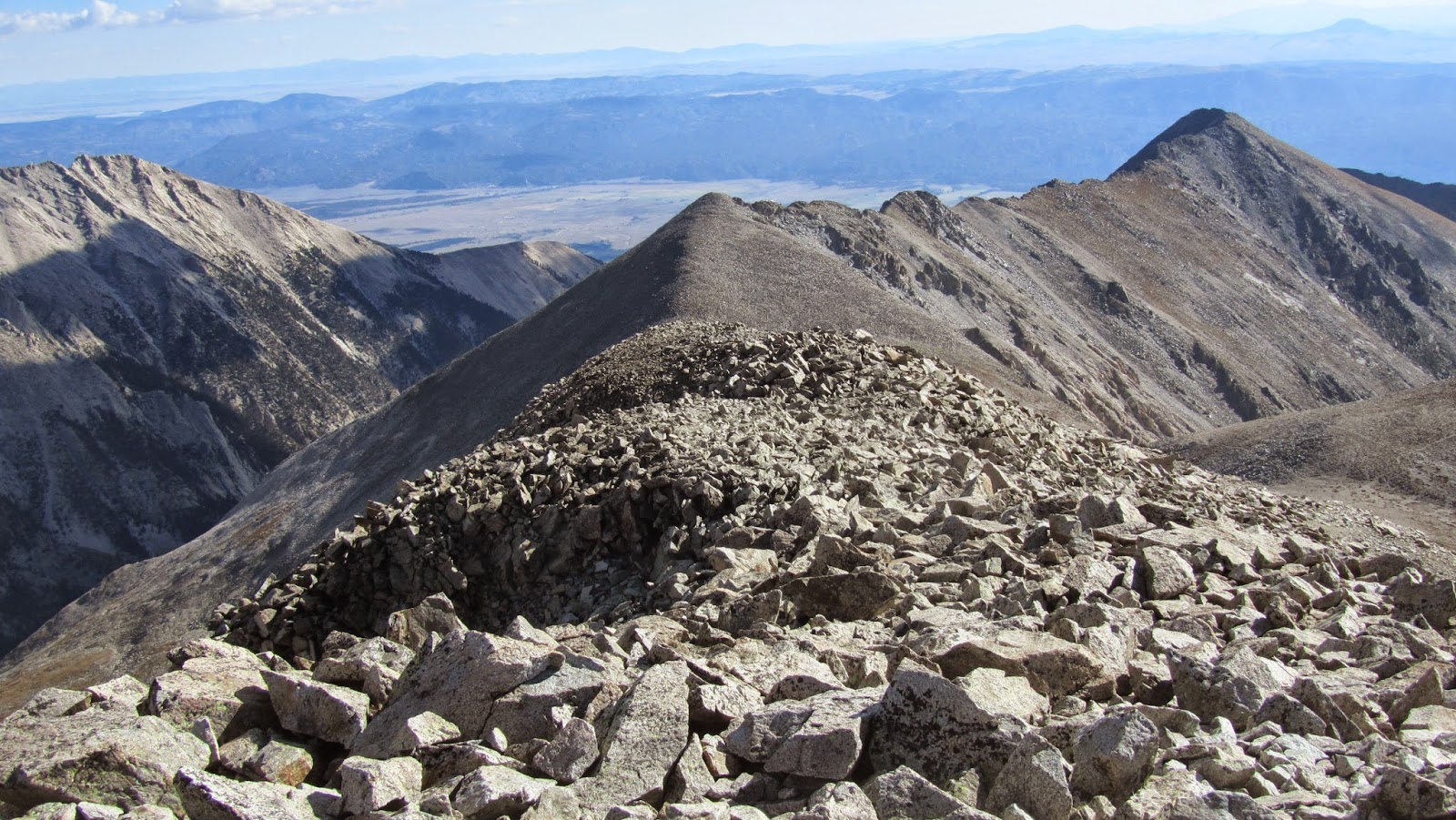 Looking east from the summit

My least favorite part of this hike was the return trip.  This route is an out and back.  Once I descended Tabeguache, I had to reclimb Shavano since there are no good routes around it.  Despite regaining 700 feet of elevation, the trip back up Shavano wasn't as bad I expected.  The ridge from the Tabeguache side is more gradual and I made it back to the top fairly quickly.  I gained some energy after my snack on Tabeguache.   The summit was still free of people although I could see another hiker making his way near the saddle. 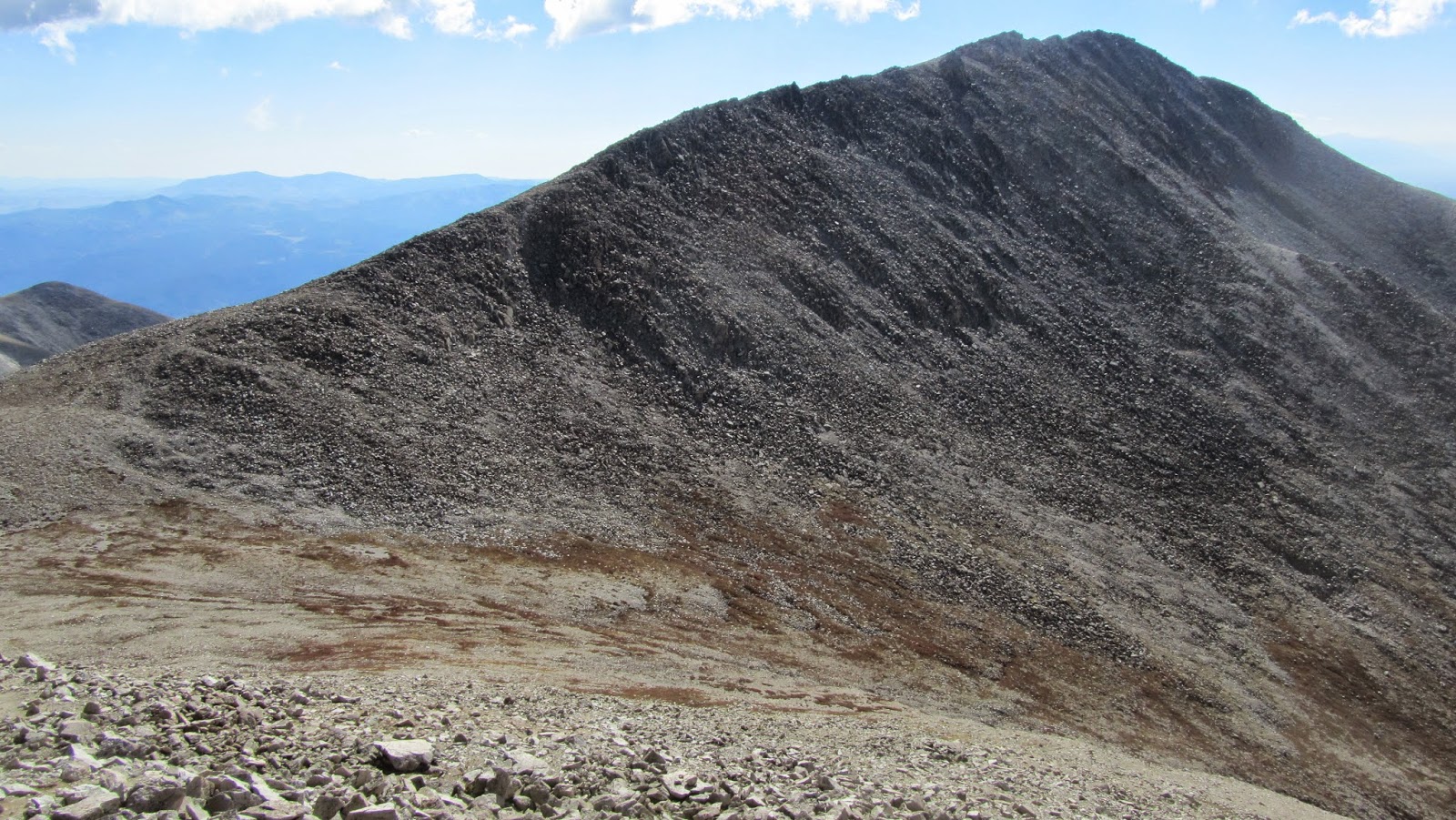 The climb back up Shavano follows the ridge 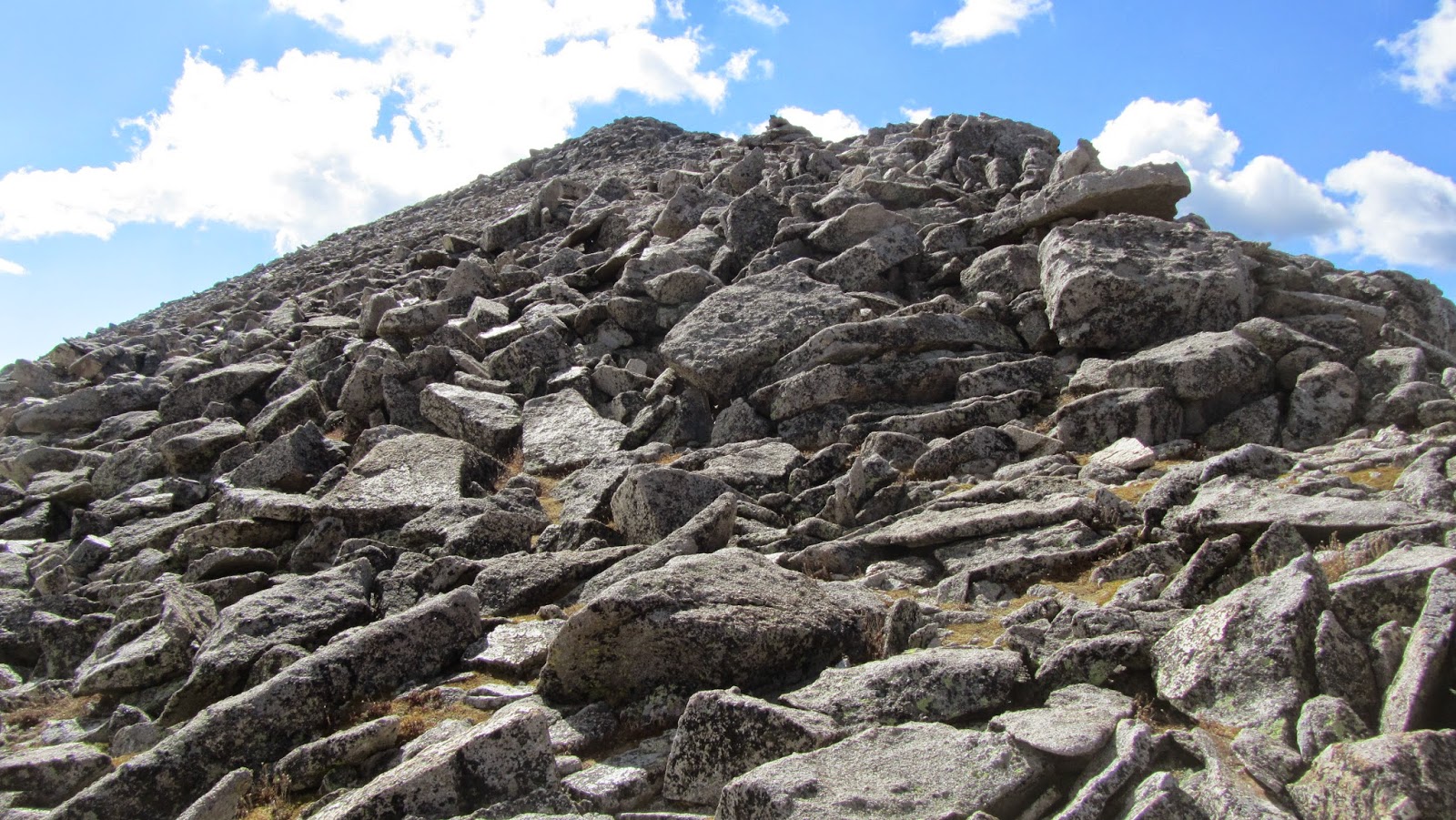 I enjoyed the company of marmots and pikas as I left the summit of Shavano. They are common in any alpine setting in Colorado.  Usually they will whistle at you before they run away or hide under rocks.  One marmot in particular caught my attention more so however.  This marmot was perched on a rock with somewhat of a steep drop behind it.  He didn't run.  What made this marmot sighting so interesting was the fine view behind it.  It almost looked as if the marmot was sitting on its perch enjoying the view. 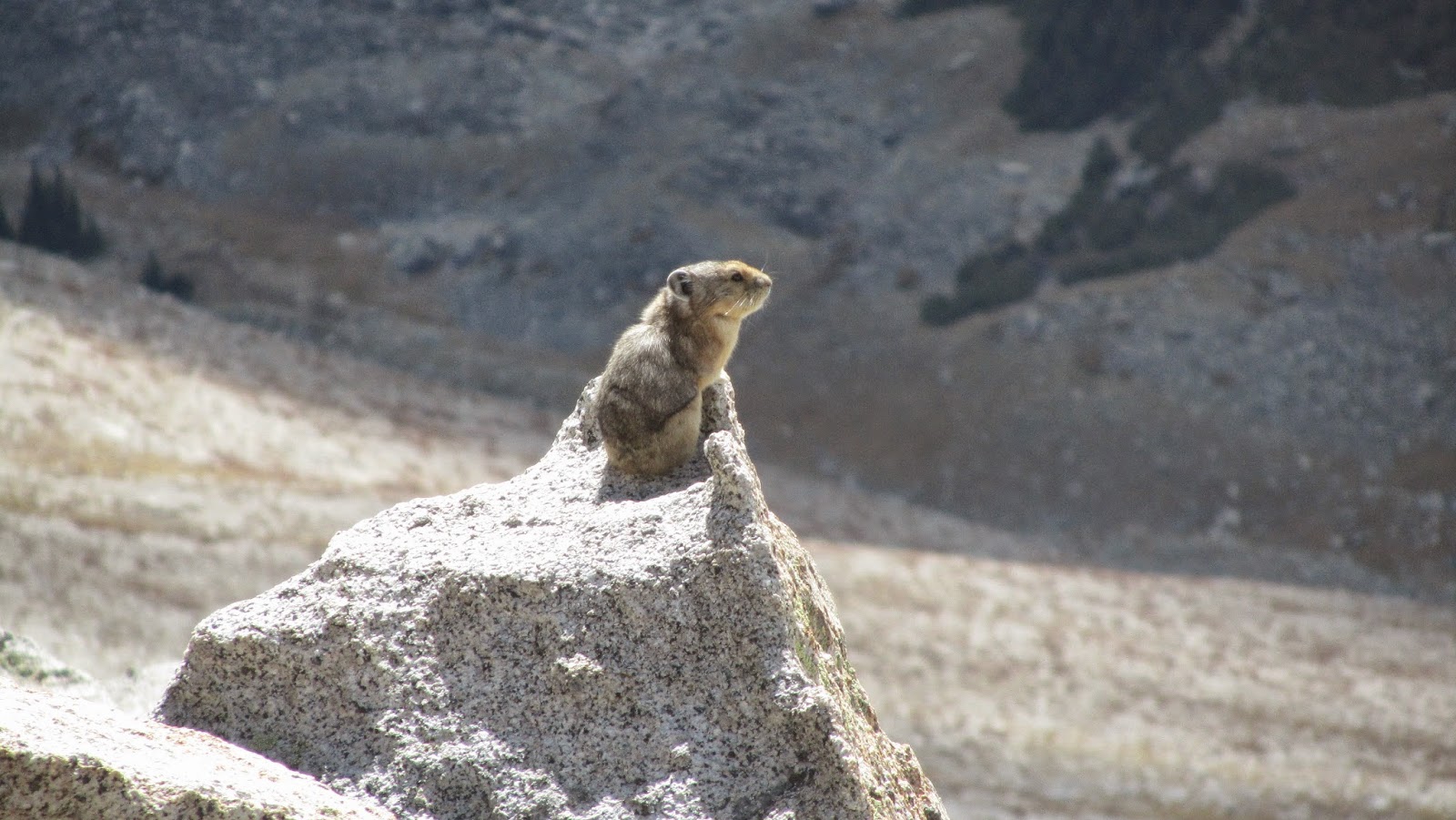 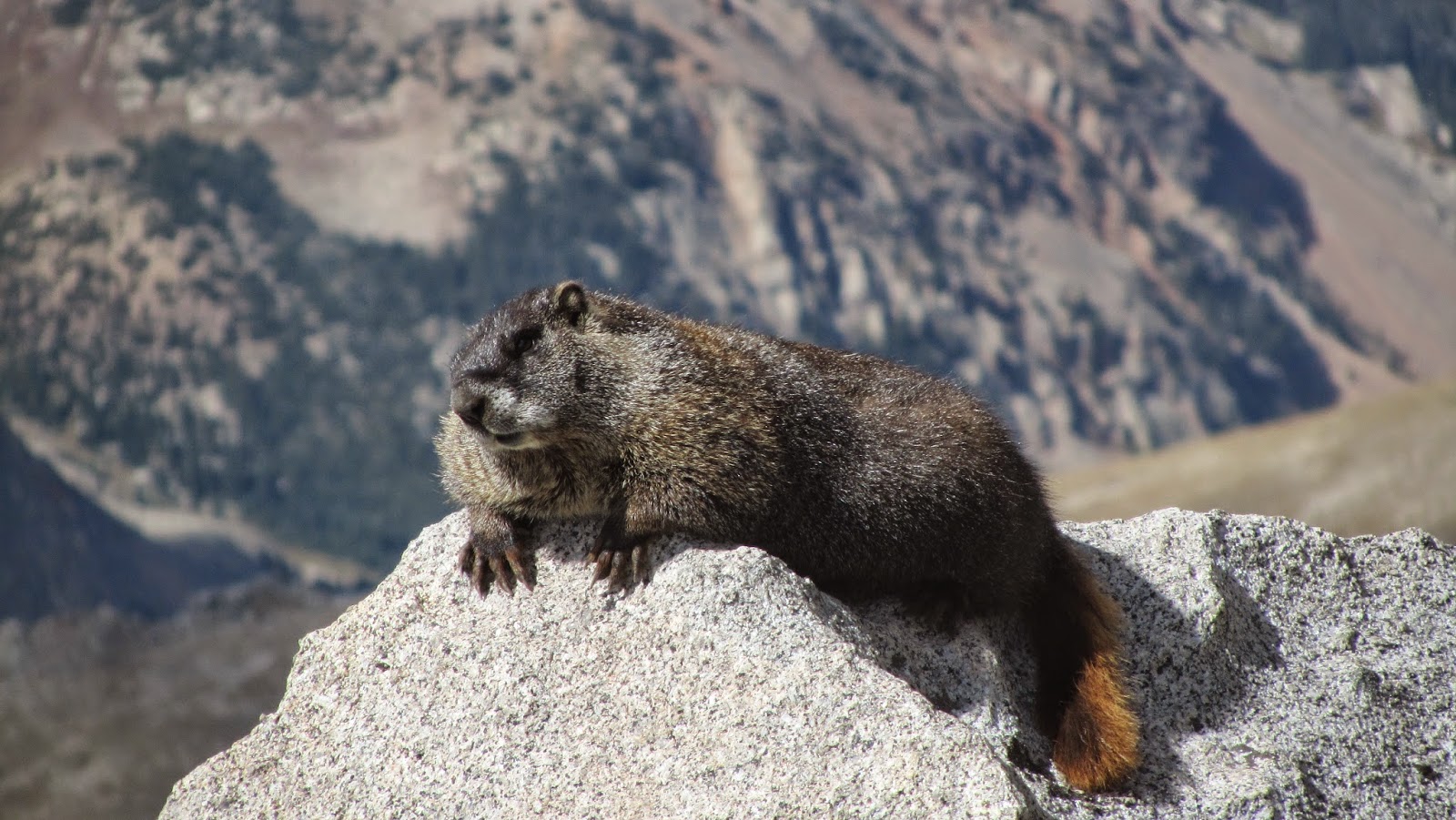 Marmot determining if I am a threat 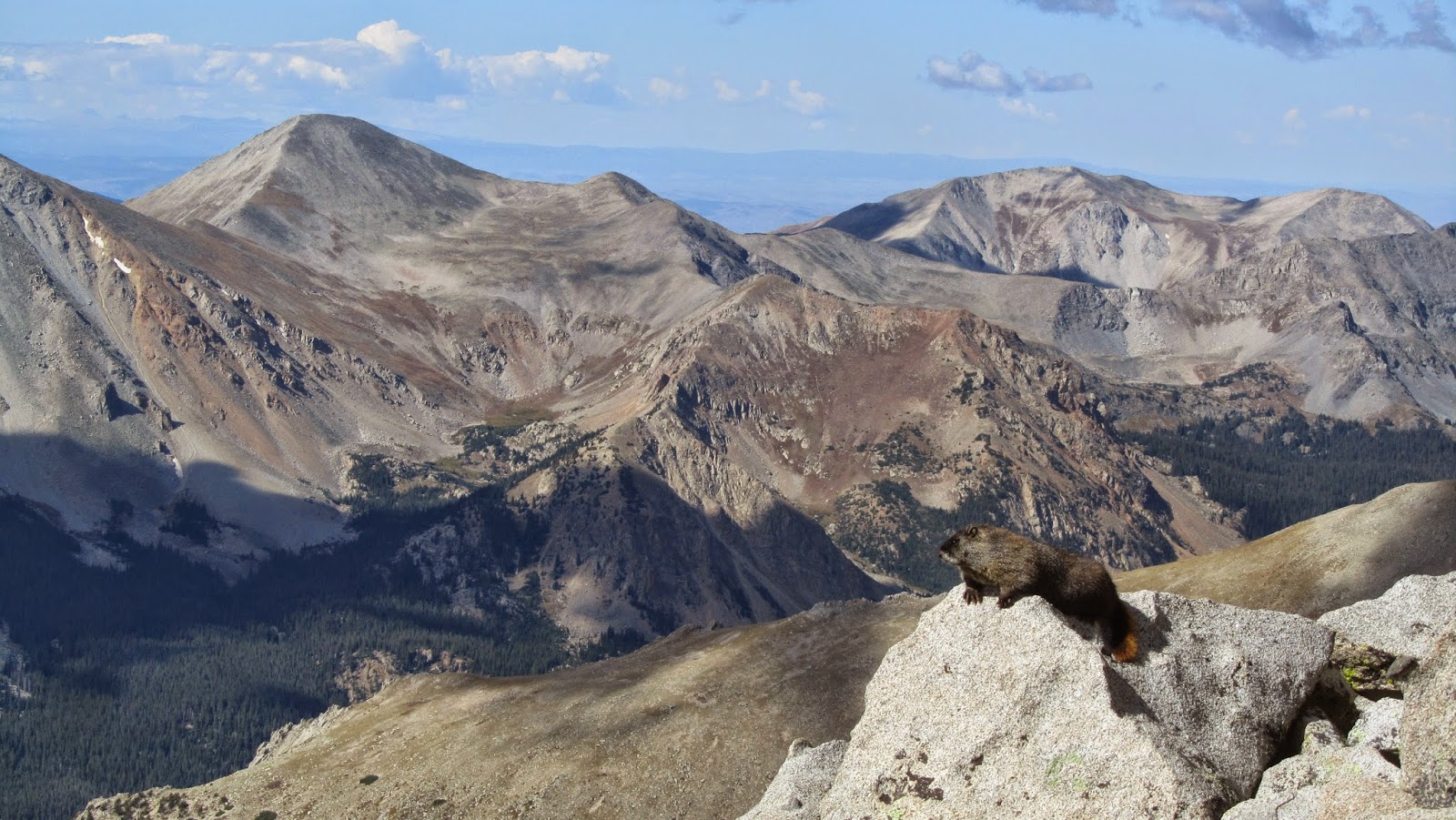 The remainder of the descent went quickly.  Along the way I passed a handful of other groups making their way to the summit of Shavano.  The footing on the way down was a little loose at spots with sandy tread.  The descent was particularly easy as I could breathe a lot easier going downhill.  I was back at the trailhead just under six hours from the start of the trip after 11.25 miles of hiking and 5600 feet of elevation gain. 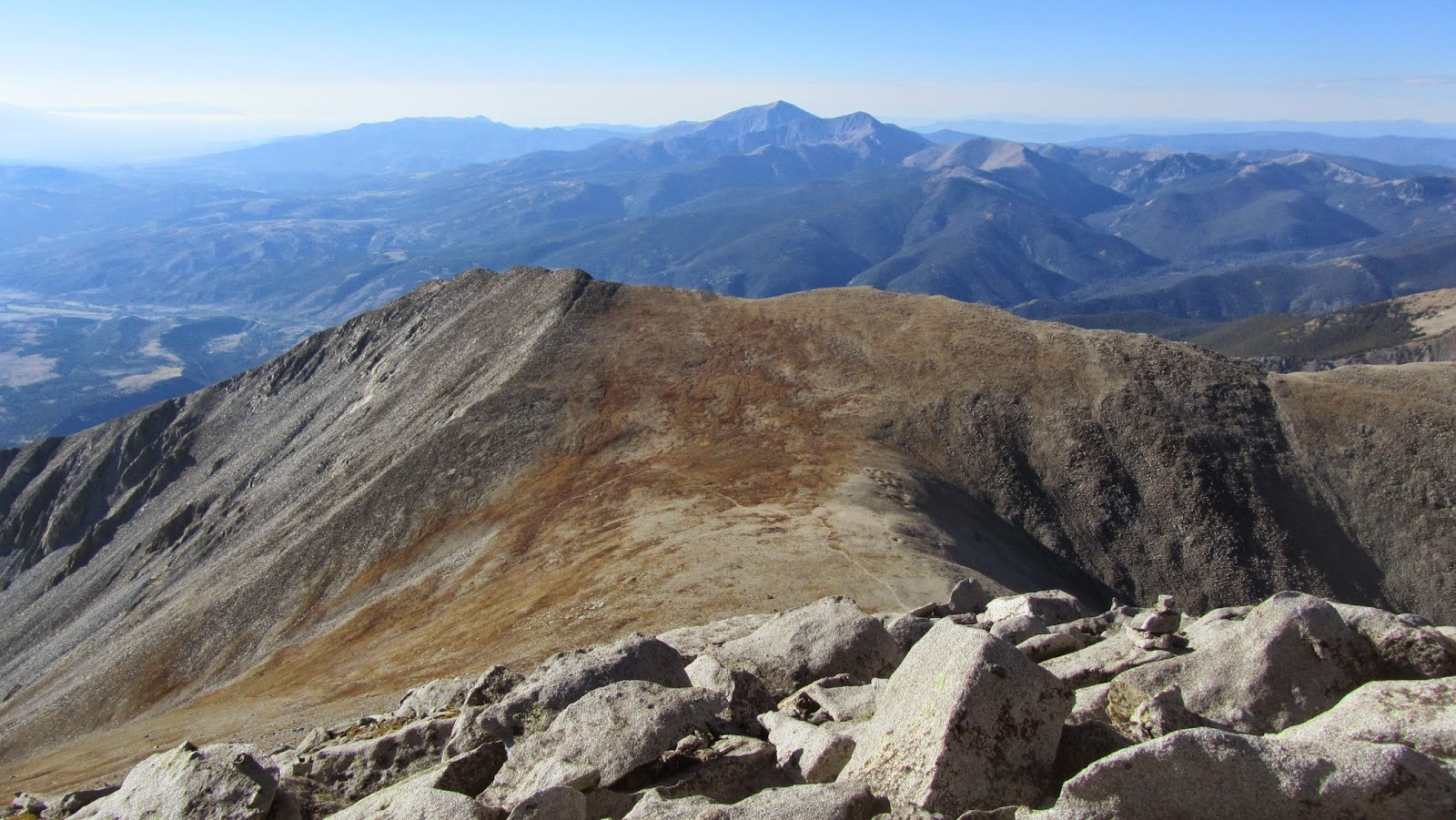 Looking toward the saddle below Shavano 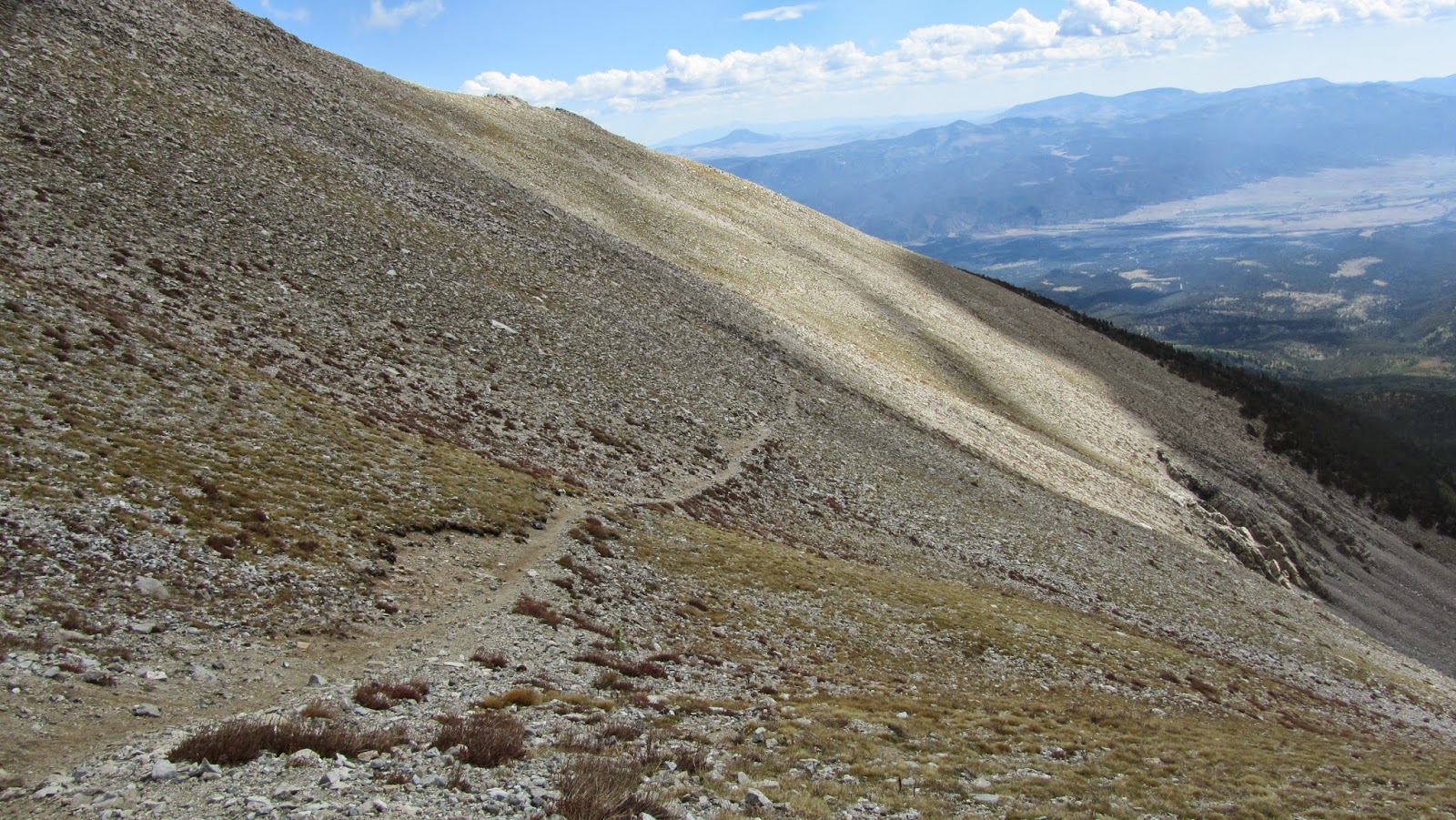 Trail as it descends Shavano 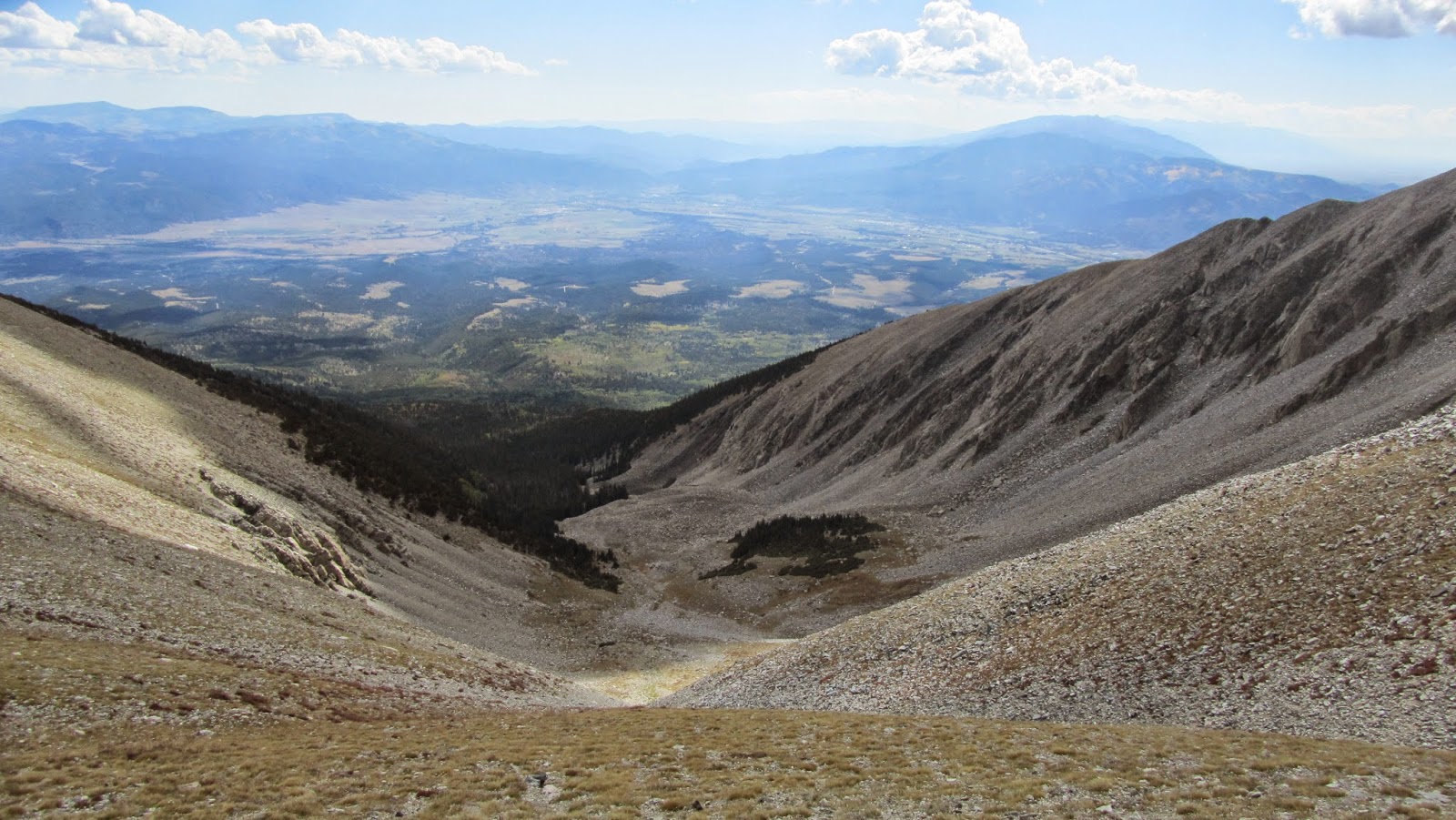 Looking toward the Arkansas Valley

With large stretches of terrain above treeline, this trip had good scenery.  It seemed like the length of the Sawatch Range was visible.  The most prominent peak visible was 14er Mt.Antero just to the north with Mt. Princeton peeking out behind it. To the south, Mt. Ouray is most dominant.  The peaks of the continental divide are just to the west with the ski area and towers on top of Monarch Pass easy to spot.  The Arkansas Valley and the city of Salida are directly to the east with the Arkansas Hills beyond the valley.  I think I could even see the outline of Pikes Peaks in the distance.  The long line of peaks of the Sangre de Cristo Range can be seen to the southeast.  With autumn approaching, patches of bright yellow aspens stood out in all directions. 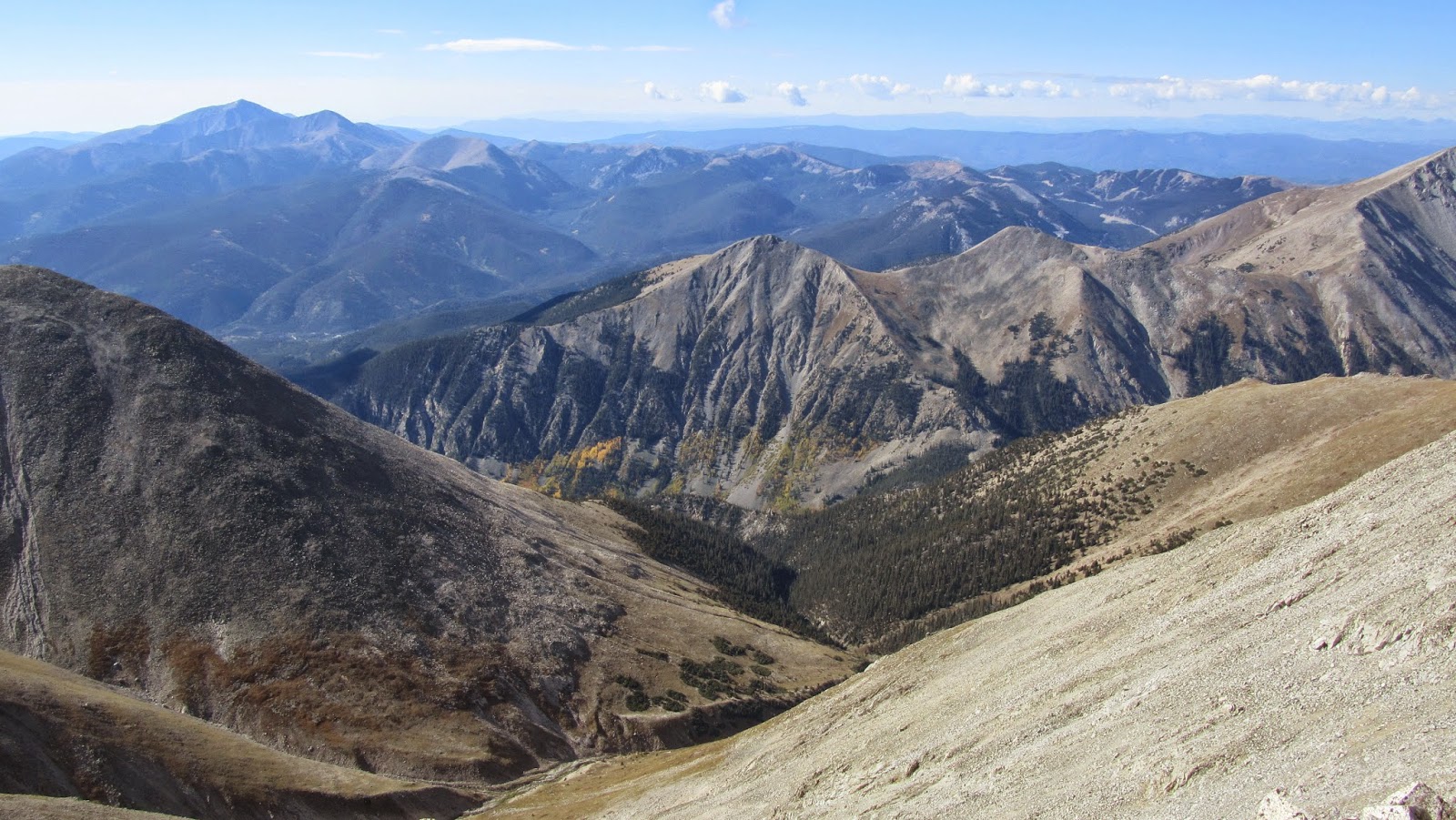 Plenty of scenery above treeline 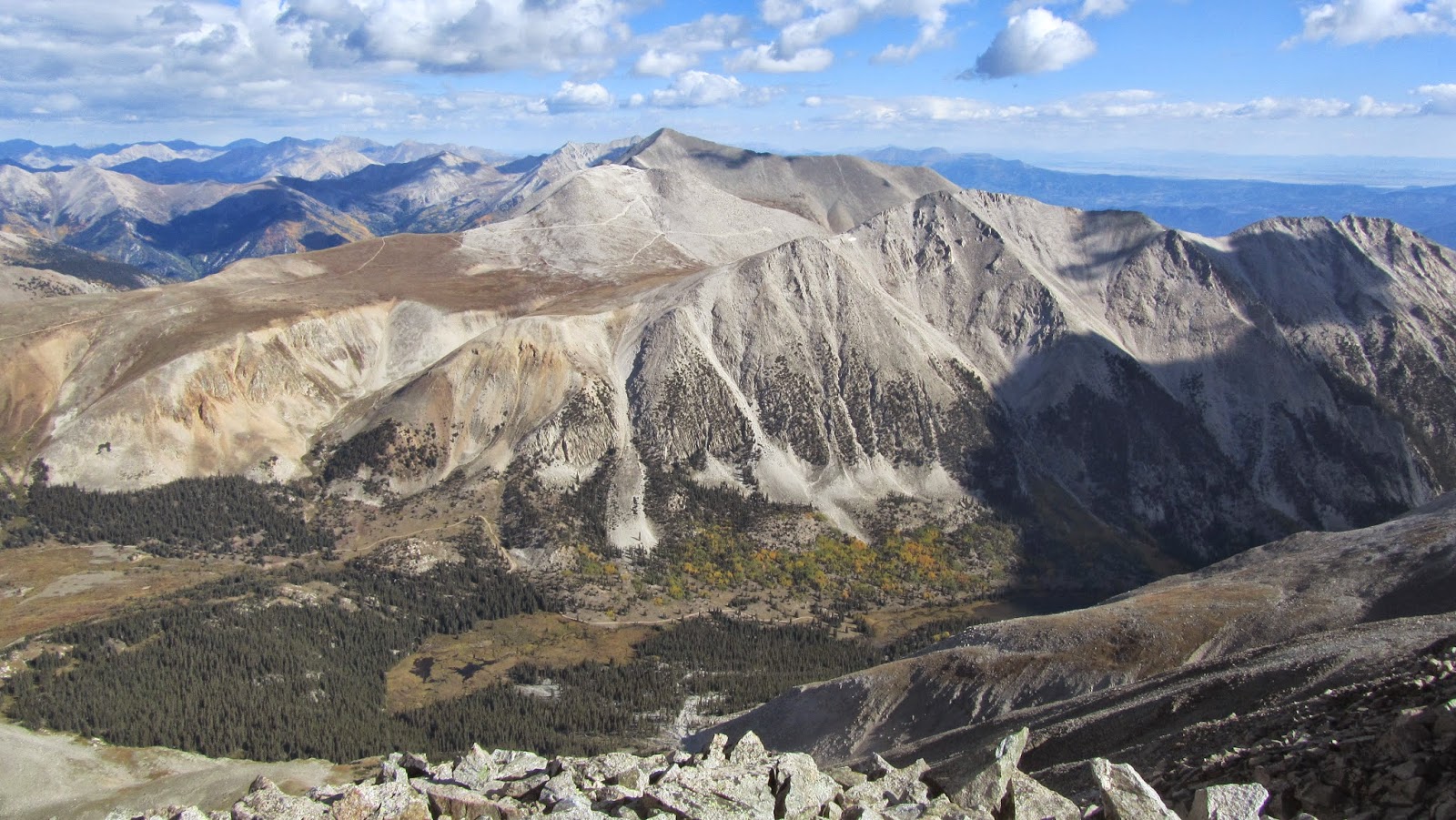 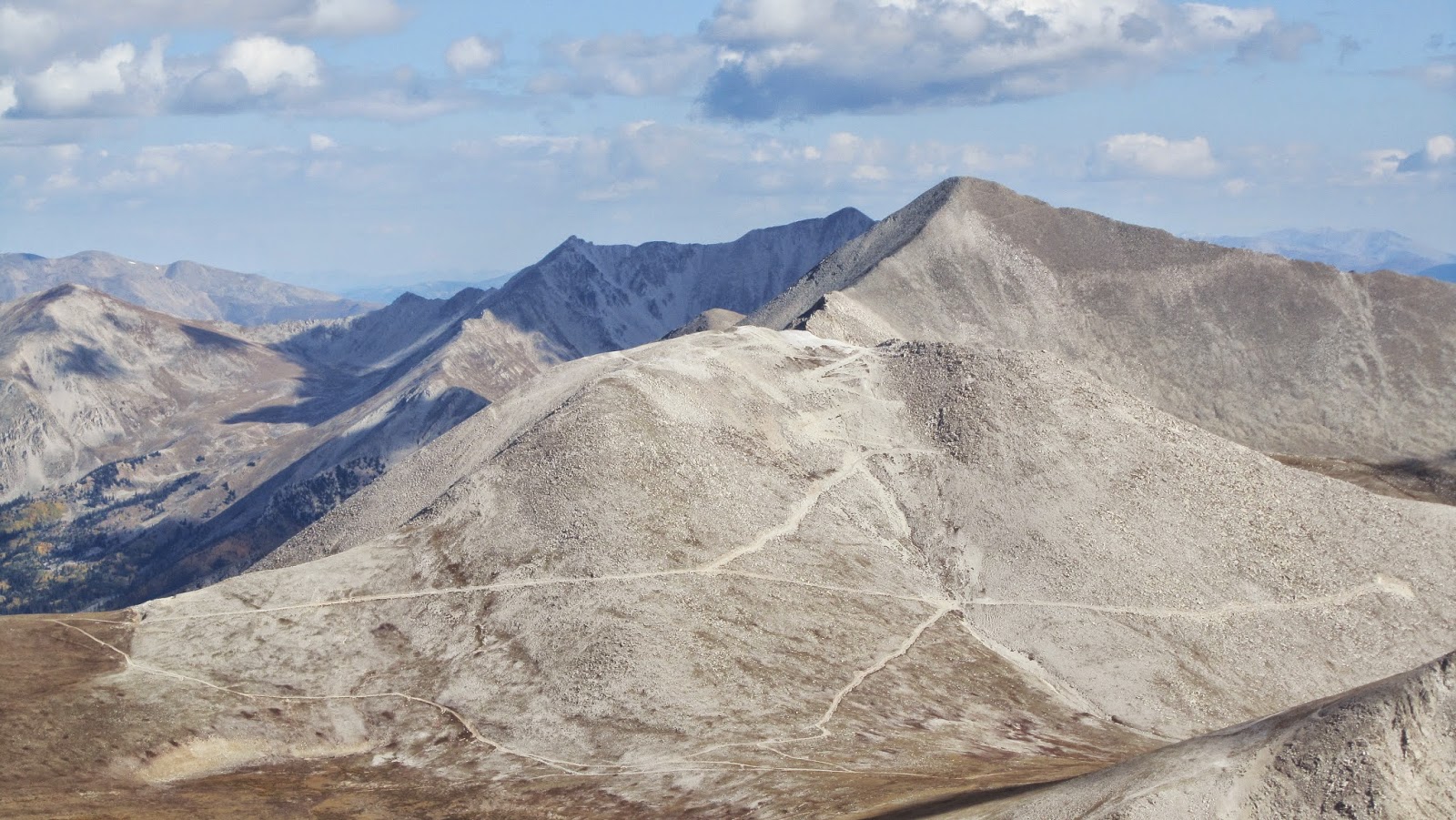 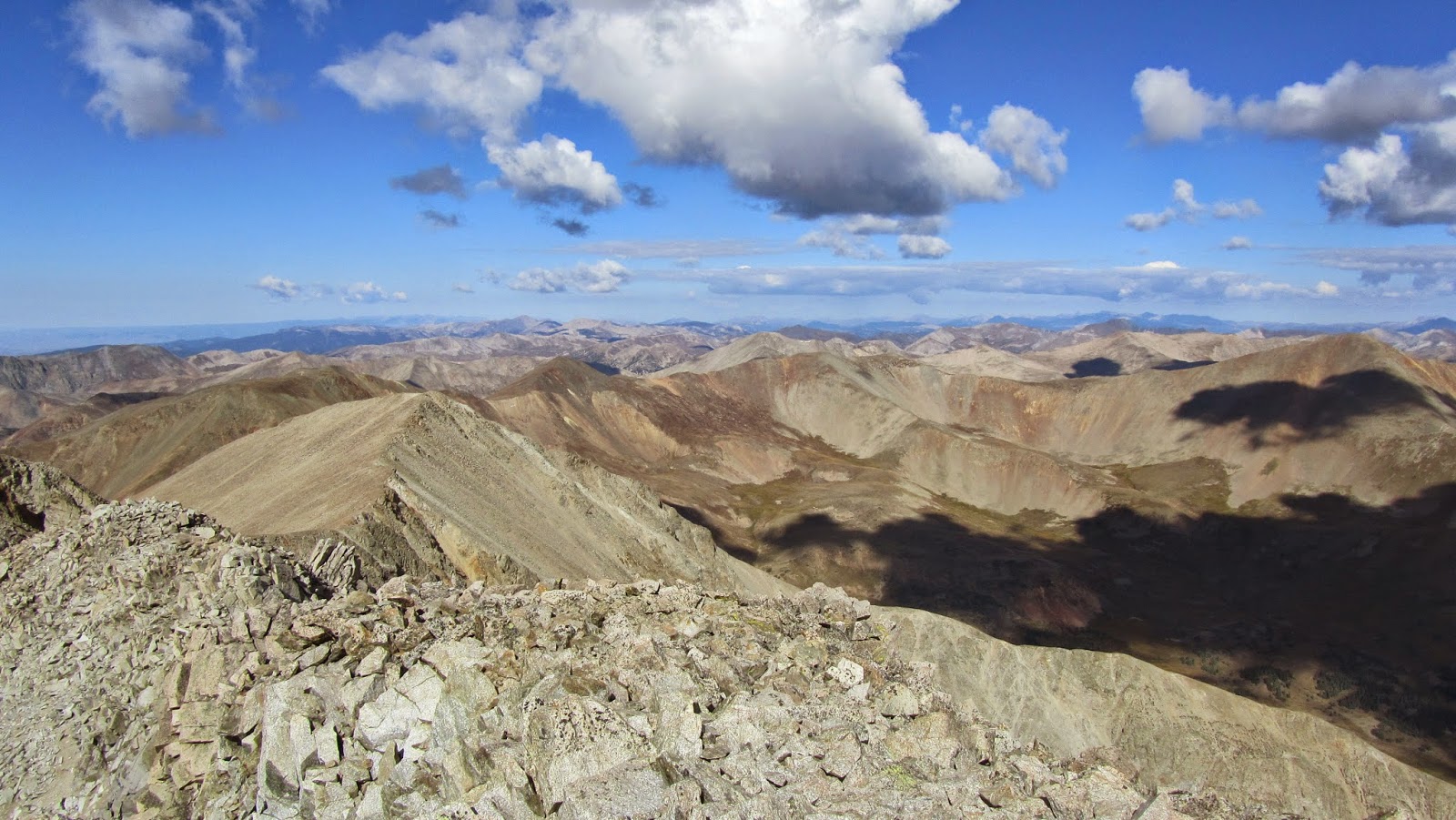 This hike was fairly easy compared to last few hikes I have done.  Most of the route had trails and only minor scambling never exceeded easy class 2 difficulty.  My last few hikes were all 15 miles or more and consisted of several summits.  Large portions of those hikes were off trail as well with sections of class 3 and even a few short sections of class 4 on one hike.  While the elevation gain is fairly substantial and the thin air at 14000+ feet is noticeable, these peaks were easier than most of the 13ers I have climbed. 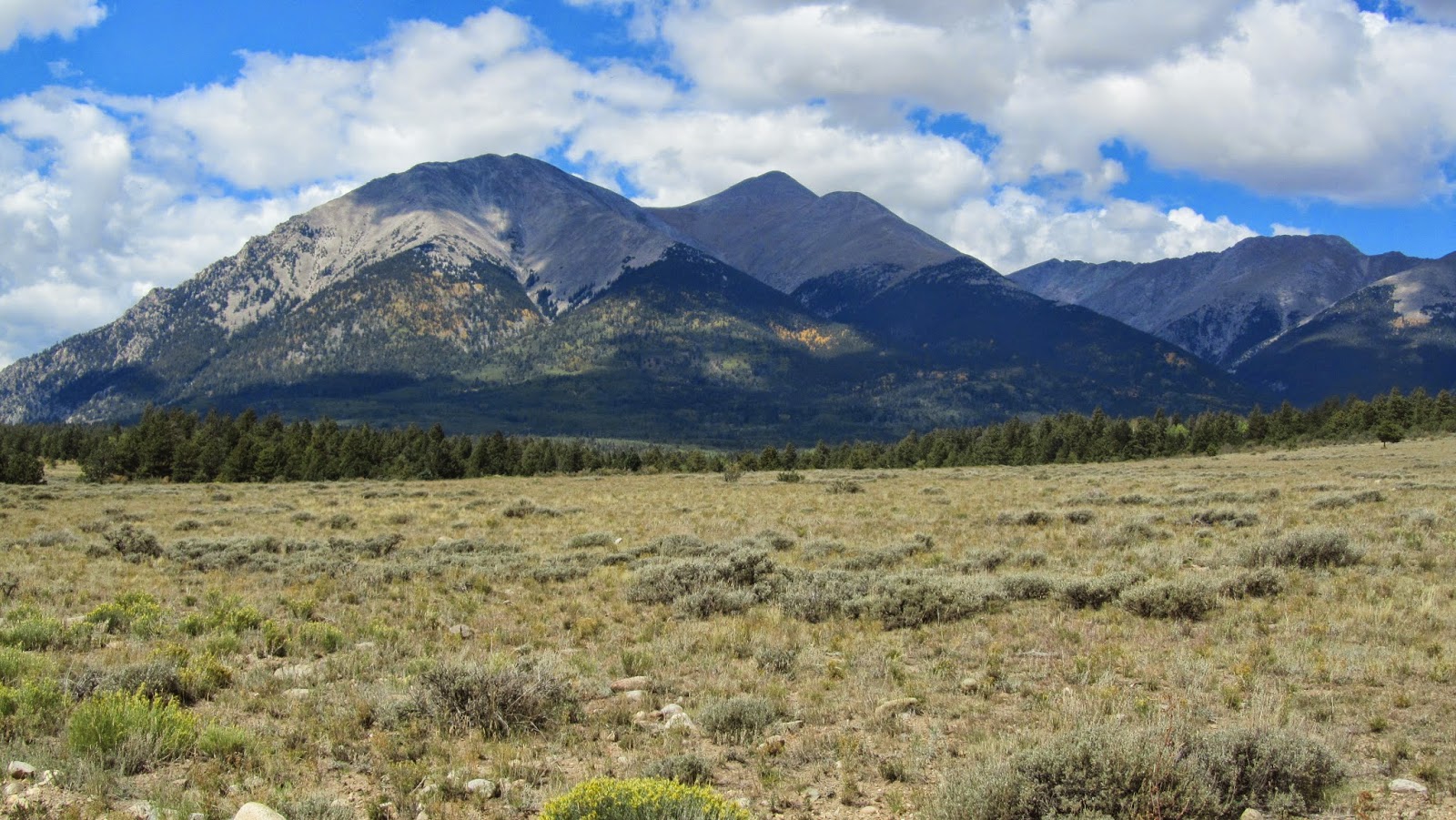 Looking back at Shavano