A cold sidelined me from any outdoor activities the past couple weeks but I finally felt good enough for some outdoor fun this weekend.  With warm weather, a mountain bike ride seemed like my most appealing option.  A lot of the higher elevation trails are still snowy and muddy so my sights were set on a lower ride.

Originally I planned on a ride near Salida.  I had an errand to run Canon City however .  A fairly new trail system called Oil Well Flats just outside of Canon City seemed to have potential.  Most trail reports of the area had good things to say about the riding.  I decided to combine my errand with a mountain bike ride.

The drive from my home in Howard to Canon City travels along the Arkansas River through Big Horn Sheep Canyon.  Like the name implies, there is a sizable population of the sheep in the canyon.  I have seen sheep several times driving through the canyon in the past.  On my trip Sunday morning, I saw three separate herds with a handful to a dozen sheep in each herd.  I always enjoy seeing the sheep but this time the sheep were lingering in or very close to the road.  The first herd was off the road a safe distance.  I came close to hitting sheep that were in the road or right along the shoulder in the second and third herds I passed.  Because of the windy nature of US 50 through the canyon, wildlife isn't always visible until the last minute.  Unfortunately I wasn't able to get any pictures since I nearly hit the sheep and they ran away.

After my sheep safari, I arrived at the first trailhead at Oil Well Flats, just a few miles north of Canon City.  Canon City sits lower in elevation and is in a warm area.  It is often as much as 20 degrees warmer than where I live in Howard.  The area is also very dry and is basically a high desert.  This makes the area a good choice for riding in the fall or spring and is often free of snow most of the winter.

My ride followed a suggested route from the Lower Arkansas Mountain Bike Association, the group that builds and maintains the trails at Oil Well Flats.  From the trailhead, at just under 6000 feet in elevation, my ride  followed singletrack trail.  The trail winded and twisted for nearly two miles while gradually climbing on a trail called Tectonic Shift.  The singletrack had nice flow to it with a few sections of rock to keep it interesting.  Cacti was common right along the trail and I had to be careful not veer the trail so I didn't ride through any cacti.  At one point I got a couple of cactus needles in my foot through my shoe from a plant on the edge of the trail.  Another rider at the trailhead managed to crash onto a cactus and was full of needles and not too happy.  After two miles I reached a section of doubletrack that I followed briefly before hitting the next section of singletrack.

I traveled a short distance on a trail called Anticline before reaching Unconformity.  Unconformity had about 3 miles of singletrack that continued to wind through the desert landscape.  Unconformity was more technical than Tectonic Shift and climbed gradually the entire time.  Plenty of pokey desert vegetation lined the trail.  There were more rock features to navigate as I climbed Unconformity.  The trail traveled through scrubby pinon forest part of the time while traveling through an old burn area the rest of the way.  In the open burn area, the views opened up taking in the arid landscape around Canon City and reached as far as the snowy Sangre de Cristo Range.  I passed by interesting rock formations on Unconformity and some of the rocks were incorporated into the trail. I rode toward, then around, sections of cliff rising more than 200 feet.

A short jaunt on another section of doubletrack after Uncormity brought me to a trail called Island in the Sky.  Island in the Sky was the most diverse and scenic section of trail.  The trail was about three miles long and entirely singletrack.  It started winding through forest,  then trail broke out of the forest and began climbing a ridge.  Although it was the steepest climb of the ride, the excellent trail made the climbing fairly easy.  The trail reached the top of the ridge with far flung views in all directions with the Sangre de Cristos in the distance making an impressive backdrop.


From the top of the ridge, the most technical riding of the trip began.  The trail immediately became more rocky as I descended.  The slope was in the open and offered nice views of the valley below where my ride began.  As the rocks became more common, I popped out onto the top of the 200 foot cliff I saw earlier on the ride.  The trail followed the top of the cliff no more than 10 feet from the drop at times.  The trail at this point was entirely rock and at times a little tricky to follow with no real tread.  After a short distance the trail turned away from the cliff top and was more trail like but quite technical.  The steepest part of the ride followed and I descended quite quickly over a mix of fast singletrack and technical sections. 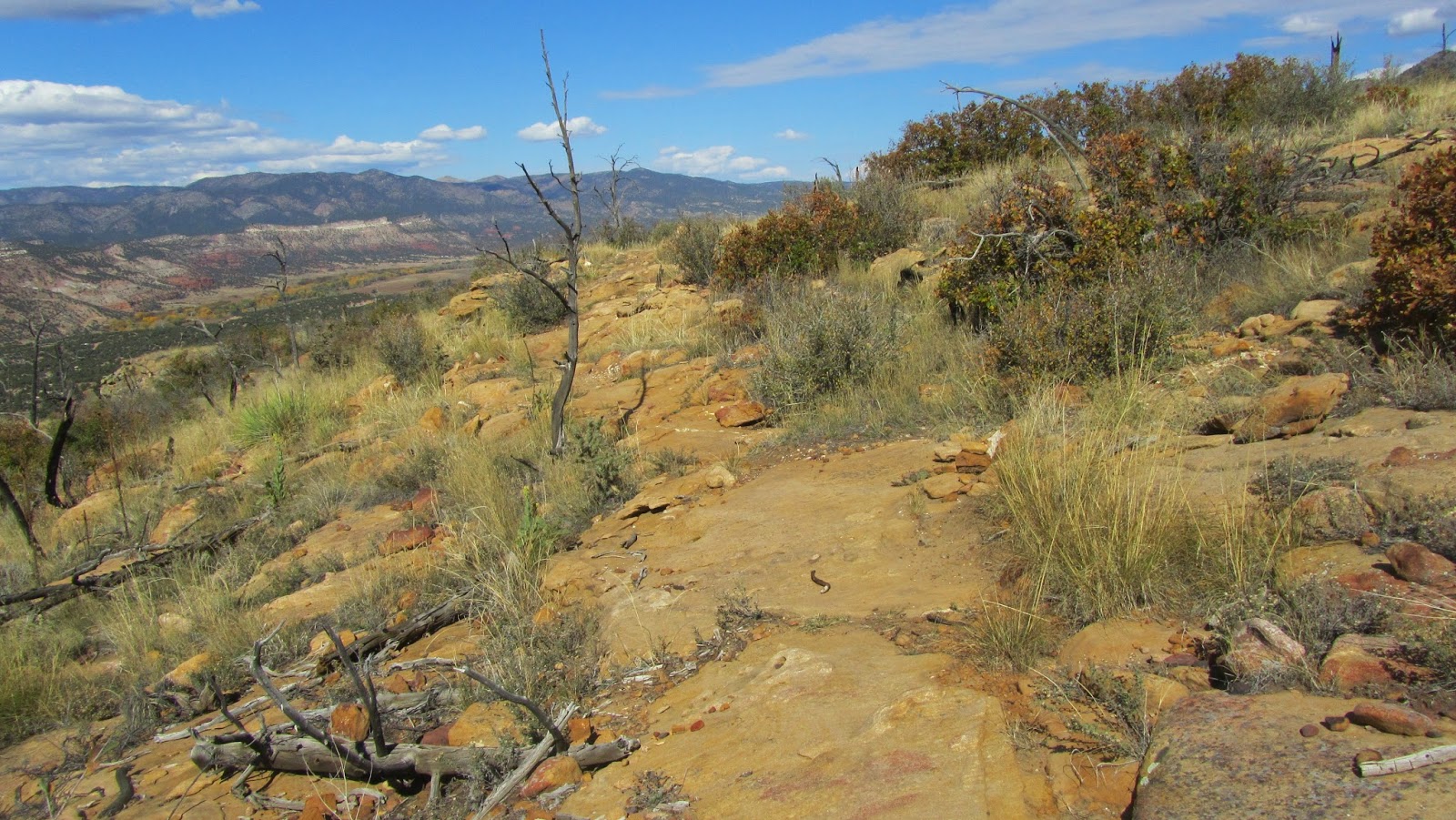 I had my only incident on this section of the ride.  I cut a turn tightly and brushed against a harmless looking bushy tree.  The bush however wasn't very forgiving.  A stick from the bush wedged between my frame and chain and stopped me dead in my tracks with the stick jammed in there pretty good.  It took some work to get it loose.  In the process, my lower leg got pretty scratched up and bled a bit.  It was nothing serious.  It looked worse than it was until I had a chance to clean up the scratches and blood.

At the end of Island in the Sky I followed the Fire Canyon Trail shortly back to the start of Island in the Sky.  From there I retraced my route to the trailhead following Unconformity, Anticline, and Tectonic Shift.  In reverse the ride was almost entirely downhill and a blast to ride.  The ride was about 14.4 miles and I think all but a half mile or so was singletrack.  I don't have the exact elevation gain but I'm guessing it was more than 1500 feet of total climbing.  The total ride took me just under 2 hours.

Even though it was a relatively short distance, this was an awesome ride.  The trails were nicely laid out and a ton of fun to ride.  The Lower Arkansas Mountain Bike Association (Lamba) has done a great job building these trails and continues to expand the system.  In general I would consider it intermediate riding but there are definitely a few sections that I would consider advanced, particularly the descent on Island in the Sky. Canon City tends to be quite hot in summer so I wouldn't recommend this in the summer.  This trail system probably has the one of the longer riding seasons in the Front Range and I highly recommend riding it.  On a nice, sunny Sunday with temperatures in the mid 70s I saw only a handful of other riders on the trails.

There is a kiosk at the trailhead with a map and all the trails and roads are signed.  I highly recommend getting a new map if you do ride here.  The map I have on the link below is current.  Nearly every website with Oil Well Flats trail descriptions uses the old trail names.  Even the kiosk had the old trail names.  Most maps I have found online list Tectonic Shift as Pebbles and Bam Bam.  Unconformity was called Ms Spike and Island in the Sky was called Cat's Pajamas.  I didn't have trouble route finding with the old map.  I just want to throw this out there as a heads up to anyone that might ride Oil Well Flats.

Click the link below for the map of my ride.  My route followed the black arrows on the map.
Map