Winter in the Colorado Rockies remains scarce this year.  Last week I was looking to take advantage of the meager snowpack to climb some alpine summits.  I set sights on the Tincup Pass area above the ghost town of St. Elmo.  There are several 13ers within reasonable striking distance from the pass.

The route to the pass is over a rough, forest service jeep road.  In winter however, the road is used by snowmobiles.  The 6 miles from St Elmo to Tincup Pass is packed and usually easily passable in winter.  It is also very popular and can be quite busy with snowmobile traffic.  This year however, the sparse snow has made for poor snowmobile conditions.  Old snowmobile tracks left the trail packed.  The road appeared to be closed to snowmobiles however, due to thin snowpack.

Emma Burr Mountain and Tincup Peak sit on the Continental Divide to the west of Mt Princeton.  The last time I was in this area was during my backpacking trip on the Collegiate Loop.  At that time the weather was miserable at best in this section.  The Continental Divide Trail travels just below the two peaks.  Majority of the time I was hiking in  dense clouds, often accompanied by a cold rain.  I didn't get many views in the area.  To read about that trip, click Backpacking the Collegiate Loop.

There are several ways to access these peaks, but the summits both sit along the Continental Divide and are trailless.  With the packed routed to Tincup Pass, this seemed like the logical choice to access the area.

Shortly after 7AM on February 1st, I left from St Elmo.  The parking area and townsite had more bare ground than snow which is highly unusual at 10,000 feet in February.  I wandered the mostly bare streets of St Elmo until I reached the road leaving St Elmo towards the pass.  This road was snowy with numerous bare spots near its beginning.  There was a "Road Closed" barricade at its start.  I'm guessing this was to prevent snowmobiles from using it due to poor conditions.

The hike up FSR 267 is a somewhat of a slog.  Signs in St Elmo indicate 6 miles to the pass.  The road gains over 2000 feet in those 6 miles.  The elevation gain is pretty gradual.  There are numerous clearings along the road that offer many views to the surrounding alpine terrain.


I originally planned on taking cross country skis for the road portion of this trip.  I decided against it at the last minute based on snowmobilers reporting lots of bare sections and rock.  I also left my snowshoes behind after seeing some recent photos with plenty of bare ground.  In general, the road was covered most of the way.  I would have been able to use my skis for the most part, removing them for a few short sections of bare ground.  I would have appreciated the skis to make the long slog back down road at the end of the hike faster.  The snowshoes would not have offered much benefit.

As the road leaves the trees near the pass, the snow becomes less consistent.  There were a couple of deeper spots where it drifted and numerous stretches of bare ground.  Up until this point I was in the trees, mostly out of the wind.  The weather for the day called for a good chance of snow showers under somewhat cloudy skies.  Wind however was the troubling part of the forecast.  I did see flurries much of the morning.  The cloud cover was much higher than any of the terrain however.

Wind wasn't much of a problem in the trees.  In the open it was much more an issue.  Before I left in the morning, Monarch Pass, the closest weather station along the Divide, was reporting winds steady winds near 40MPH.  Mt Princeton, 10 miles or so away had forecasted gusts around 60.

I reached Tincup Pass soon enough.  The pass had more bare ground than snow.  I added my Gore Tex shell, goggles, and a burlier pair of gloves.  I also took the time to hydrate.  From the pass, there are two options for summits.  To the north side of the Continental Divide is Tincup Peak and Emma Burr Mountain, a pair of 13ers.  To the south is an unnamed 12,700+' summit and 13er Fitzpatrick Peak.  Snow seemed to have piled up in the meadow below Fitzpatrick and would require snowshoes.  I decided on Tincup and Emma Burr which offered less snow travel.


From the pass I climbed directly up the slopes toward Tincup Peak on a herd path. The path faded part of the way up the slope.  Without the path, the route is straightforward.  Just climb toward the top of the ridge.  After a half mile, I gained just over 1000' and reached the southern end of Tincup Peak quickly.  Other than a few drifts immediately above the pass, the snow was sparse and avoidable.

Tincup Peak has several high points.  I first reached the southern most point.  Despite having a cairn, it wasn't the highest point.  The actual 13,345' summit is over a half mile to the north.  Although there isn't much elevation change between the bumps on the ridge, one of the points requires minor scrambling over large rocks.  Much of the route is pleasant travel over pleasant tundra.  Given its open, alpine summit along a narrow ridge, Tincup Peak has great views.

Now on a high, open ridge, the wind was continuous and strong.  Flurries fell on and off.  Despite the clouds, majority of the surrounding peaks were still visible but somewhat obscured.

After taking some photos, I  headed north along the Divide toward my next target over a mile away, Emma Burr Mountain.  As I dropped toward the saddle between the two summits, I crossed one of the few sections of unavoidable snow.  There was a moderately steep but short pitch over consolidated snow that I could boot ski a few feet.  Otherwise I could avoid the little bit of snow along the Divide.  Heading this direction the wind was generally at my back.  Despite sustained winds of 50MPH or so, the wind was steady and I didn't get pushed around much by surprise gusts.


The route toward Emma Burr is pretty straightforward.  You follow the Continental Divide, traveling fairly close to the ridge crest most of the way.  While mostly tundra, there are a few rocky sections.  Some can be bypassed by dropping to the west, but generally they are short lived and not overly challenging.  Not surprising with the lack of snow, there are barely any cornices formed along the east side of the ridge.  As I approached Emma Burr, I started to see glimpses of sun poke through the clouds.

After minor scrambling, I reached Emma Burr's summit.  At 13,538'  Emma Burr is one of the highest point along the entire Continental Divide.  Oddly, the wind on the summit proper was rather light compared to the rest of the ridge.  I took the opportunity to have a snack and water before heading back.


The summit views are similar to Tincup's, with a better vantage point to the north.  Most prominent is Mt Princeton, about 10 miles to the east.  Alpine terrain covers the distance between Emma Burr and Princeton, with numerous 13,000' peaks in between.  The western sides of the mountains have scarily little snow on them for midwinter.  To the south of Princeton, fellow 14er Mt Antero towers above the many other nearby mountains.  The southern end of the Sawatch Range is visible with the San Juans in the distance.  The Taylor Park area and Reservoir can be seen with the Elk Range in the distance.  The northern Sawatch Range stretches to the north with numerous 14,000 peaks visible, although some were obscured by lower clouds in this area.


I left Emma Burr by retracing my route toward Tincup Peak.  The skies became more clear as I traveled.  Unfortunately, I was heading into the wind on my return.  Despite the head on wind, I seemed to make good time.  After I passed the rockiest bump along Tincup's ridge, I headed directly to the pass.  Once at the pass I removed my shell and goggles and had another swig of water before making the trek down the road.


Once back below treeline, I felt rather warm, out of the wind.  Although uneventful, the 6 miles down the road seemed to go slow.  Despite some sun and warmer temperatures, the snow on the road stayed solid.  I made it back to St Elmo about 245PM.  Although I have been to St Elmo several times, I always enjoy looking at the old buildings and snapped a few photos before heading to my car. 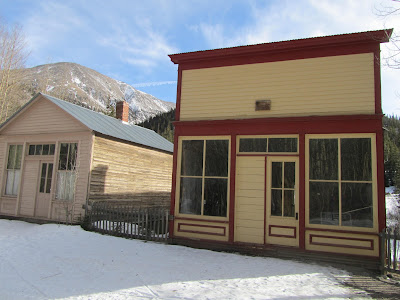 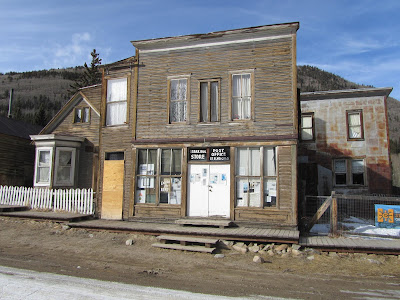 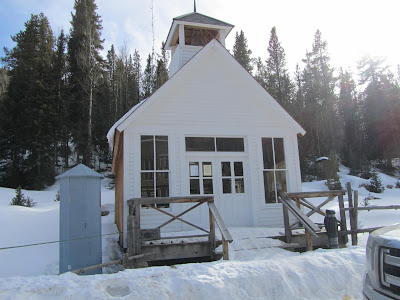 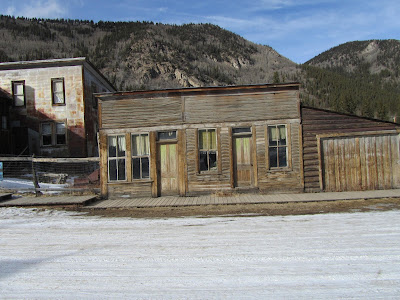 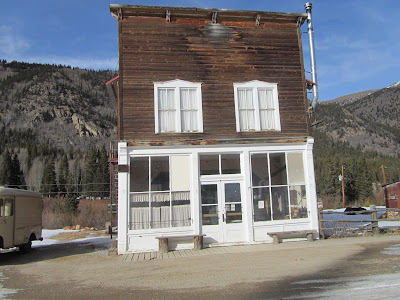 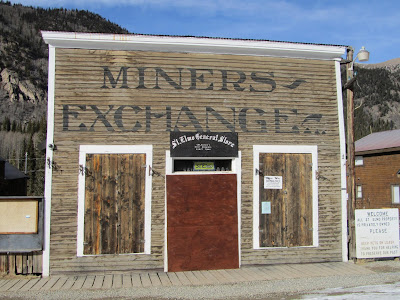 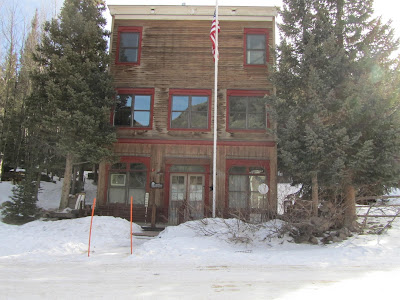 By the time I reached my car, my round trip distance was around 17 miles with more than 4500 vertical feet of climbing.  I have done many days much longer than this hike, but the combination of distance with the punishing wind, I was tired after this one.

For those wanting to visit these peaks, Tincup Pass can be accessed in summer by 4X4 or ATV.  From the pass you can visit both summits and return in less than 5 miles.  The Continental Divide Trail travels under both peaks as well climbing to over 12,800' with decent access from the trail.