After my last peak bagging excursion the previous week in the Sangre de Cristos, I was looking for a more mellow day in the high country.  That hike was nearly 18 miles with a long stretch of it off trail.  I was looking for a summit to climb, that was on the easier side.

To find an easier hike, I decided to aim higher.  My last hike climbed three 13ers.  The 13ers are often overlooked and tend to be harder than 14ers.  Most 13ers don't have trails to their summits.  14ers see far more traffic and most have trails or at least herd paths to there summits and set routes.

After giving it a little thought, I decided to climb Mt Massive.  Mt Massive is located in the Sawatch Range, not too far from Leadville.  At 14,421',  Massive is the second highest peak in Colorado, and the Rockies for that matter.  Depending on which elevation is used, it is only 12 feet lower than the highest Colorado summit, Mt Elbert.

Mt Massive stands only 5 miles to the north of Mt Elbert and both peaks are visible from Leadville and the valley below along Route 24.  Despite their loft elevations and their titles as the highest to peaks in the entire Rockies, they are both mellow mountains.  I had previously climbed Mt Elbert but this was my first time on Massive.

Mt Massive lives up to its name.  Not only is it tall, it's also literally a massive mountain.  There are more than 50 14,000' peaks in Colorado.  Mt Massive has the most terrain above 14,000' out of all of them.  In addition to the true summit, there are several 14,000 foot subpeaks.  At one time Massive was thought to be the highest in Colorado.

On Wednesday June, 13th.  I headed out to climb Massive with my dog Choya.  There are numerous routes to the summit.  I settled on the Southwest Slopes route.  This is the shortest and most direct route.  From the trailhead, this route is only around 8 miles round trip.  There is also a well used trail the entire way.

I started from the North Half Moon Trailhead.  Most vehicles should be able to get within a half mile of this trailhead.  Only the last half mile require a high clearance vehicle in a few spots.  Even though I was in my truck, I still stopped at the last junction before the actual trailhead.  This added about 8 minutes to my hike each way.


I started my hike about 710AM.  I quickly made it to the actual trail after my short jaunt on the rough road leading to the trailhead.  The trail starts around 10,500' in elevation.  The trail is heavily used and well worn as it travels through the forest.  The entire hike is in the Mt Massive Wilderness. 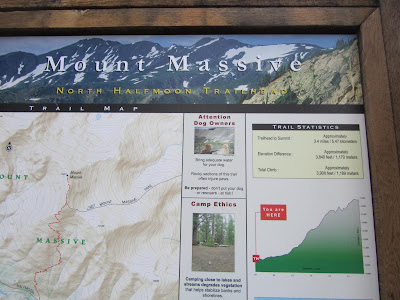 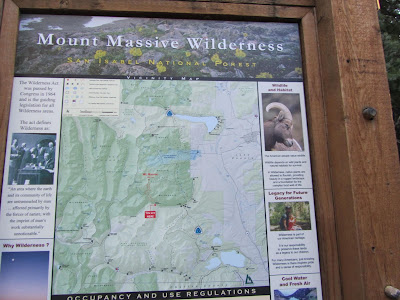 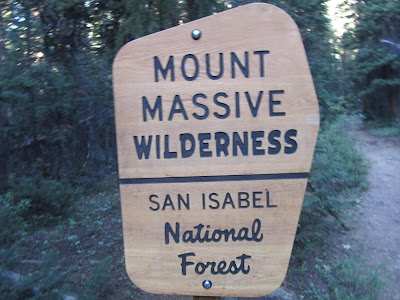 After a mile or so, the trail leaves the forest and enters a meadow.  From the meadow, you start getting views up the North Halfmoon valley.  The trail is still close to the creek at this point but still in great shape and easy to negotiate.  Before starting the actual climb, a junction is reached.  A sign marks the turn to Mt Massive.  Continuing straight would lead to the North Halfmoon Lakes.


At this junction, the climbing begins.  Initially the trail makes its way up a section of talus.  The trail is rough through the rocks and it climbs rather steeply.  A few spots the trail can be obscured in the rocks, but is generally easy to find. As the trail climbs through here it exits the trees.  Once past the section of talus, the trail mellows.

Generally the trail travels through stretches of tundra, interspersed with rock, but nothing like the talus field at the start of the climbing.  This route is short and there isn't much relief from the climbing.  There were a couple brief snowy stretches lingering, but they didn't last too long.  They were pretty well packed and postholing wasn't an issue.


The North Halfmoon valley is quite scenic.  Once above treeline, the scenery is impressive, particularly to the south side of the valley.  Mt Elbert and many high 13ers are constantly in view.  Most impressive from this angle is the view of Deer Mountain.

There were a lot of marmots along the trail.  It seemed like their whistling was nearly constant.  This was themost  marmots I have seen in  a long time.  Choya was a little too interested in the marmots.  He was leashed however and couldn't get as close as he liked.  They must be used to people on this busy route since they seemed to be willing photograph subjects.  Below is a gallery of some of the marmots we encountered 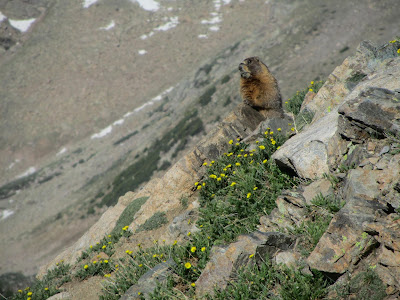 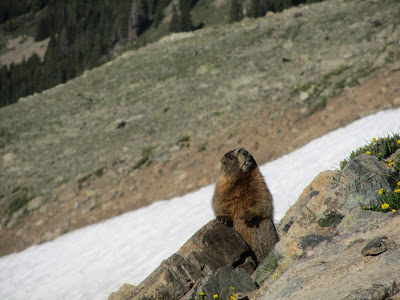 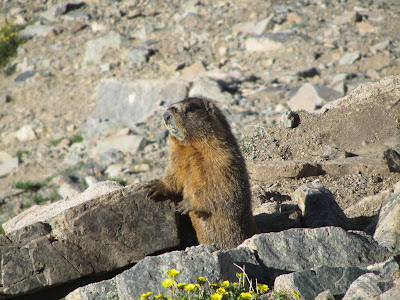 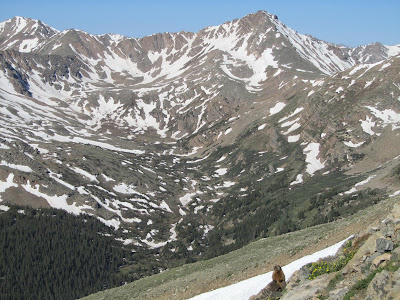 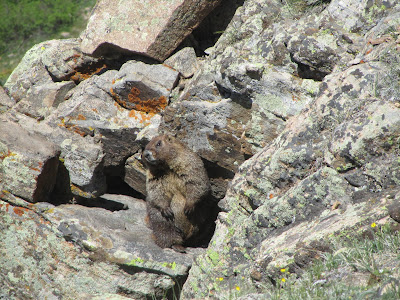 The actual summit is never quite in view while climbing.  Eventually the trail crosses a saddle to the west of Southeast Massive and reaches the junction with the East Slopes Trail.  From here the trail traverses through some rockier sections as it gains the final ridge.


The route goes over a series of bumps and the summit isn't obvious.  The points along the crest look similar in height.  The trail isn't as obvious at this point either.  Just follow the path of least resistance toward the high points. The terrain is never too tough.


Just before 930AM I reached the summit.  Once at the summit, I had to confirm on my map that I was on the right bump.  The summit high point, doesn't look like much.  There are numerous little bumps along the way not too different in height.  My first instinct was that I still had a distance to travel.  The most dramatic point is North Massive, nearly a mile away.  North Massive has a much more impressive profile and an elevation of 13,340', some 80' lower.  North Massive does not have enough prominence to be ranked.


Once I was sure I was on the summit, I took a nice break.  Surprisingly I had the summit to myself for about a half hour.  On the way up I passed a handful of groups and could see another pair making its way up the East Slopes.  The day was fairly warm, even at 14,421' and the wind was light.


Naturally, Massive has impressive views.  Most of the length of the Sawatch Range is visible with Colorado high point Elbert just to the south rising above Twin Lakes.  The town of Leadville is easily visible with the Mosquito Range behind the town.  Probably most impressive is the views toward the Elk Range.  The Maroon Bells are easy to see.  The giant white side of Snowmass stands out with neighboring 14er Capitol.

I finally left the summit around 10AM and soon crossed paths with the next group approaching the summit.  On my descent, I would cross paths with all the groups I passed on my climb and a few more.


I returned on the same trail I climbed.  The descent went by quickly.  The views on the descent seemed more impressive than the climb.  The peaks to the south of the North Halfmoon valley are always in front of you and a good distraction from the knee pounding on the descent.  I passed all the groups again on the way down a few additional groups.  My hike was finished just before noon.

I was looking for an easier hike.  This trip fit the bill.  I had a trail the entire way with no route finding and kept the distance relative short.  The hike was straightforward without too much thinking about the route.  That's not too say this hike is easy, just easier than what I have done recently.  The trail is still rocky at many spots and it is a sustained climb gaining around 4000' in less than 4 miles from the trailhead.  Don't expect to have this one to yourself in peak hiking season.  As with any 14er, they see a lot of traffic.  I lucked out having the summit to myself for the entire half hour I was on top.

I calculated the roundtrip distance about 8.3 miles from my truck, below the actual trailhead.  14ers.com lists the roundtrip from the trailhead 8.0 miles.  The sign at the trailhead is closer to 7 roundtrip.  Summit Post lists this route at 6.2 roundtrip from the trailhead.  The standard route for this hike is often listed as the East Slopes even though it is much longer.  The trailhead is more easily accessed for that route and it appears to be a much more gradual climb.  The route I described would still be suitable for beginner 14er climbers as there isn't any real technical challenge and the trail takes out any route finding challenge.