This past spring I moved to Tupper Lake in the heart of the Adirondacks.  Endless bodies of water dot the Adirondacks.  Living here has allowed me to revisit kayaking.  Having lived in Colorado the past five years, opportunities for paddling, particularly flat water were nearly nonexistent.

Tupper Lake is one of the larger lakes in the region.  It just so happens Tupper Lake sits on the shores of one of the Adirondacks larger bodies of water, also called Tupper Lake.  Since I live within a five minute walk of the lake, it makes for a very convenient, quick water outing.  There are plenty of other, quieter and more secluded paddling options in the area, but this convenience made Tupper Lake and its connected ponds my main paddling escape.  I spent much of the summer exploring different parts of the lake.  As a bonus, Puma enjoys kayaking as much as I do and joins me on many of my outings.

Tupper Lake actually consists of three bodies of water.  Tupper Lake is the main body of the lake.  Two attached ponds are considered separate despite being connected.  Simon Pond connects to the east side of the main lake.  Raquette Pond makes up the northern end of the lake and is the body of water that is visible from Tupper Lake Village.  It's difficult to find numbers on the different lake's sizes, but from the southern tip of Tupper Lake to the northern end of Raquette Pond runs more than 9 miles.

A large paved boat ramp area provides the main access Tupper Lake along Route 30, a few miles south of the village.  Paddling to the south, several islands dot the middle of the lake.  Unfortunately most of the islands are inhabited.  Rocky shores along the island make for interesting scenery.  The islands also act as a windbreak depending on the wind direction.  Paddling downwind from the islands blocks some of the chop on a windy day.

Perhaps the most impressive of these islands is Bluff Island. Large cliffs rise from the southwest part of the island.  The cliffs tower impressively, perhaps 100 feet above the lake.  If winds are manageable.  A nice paddle involves circling several of the islands.

The second campsite to the north from the boat launch I find the most appealing.  Just before the campsite, 15-20 foot cliffs line the shore of the lake.  The water is deep enough to jump from the cliffs into the lake.  The campsite itself also features the nicest surface to camp.  As an added bonus, the views from this area are pretty impressive.  Looking across the lake offers a great look at the higher Adirondack peaks.  Most obvious is the Seward Range in the western High Peaks with the Santanoni Range rising just south of the Sewards.

Continuing to the north on the lake, you enter a large marsh with abundant aquatic weeds and grasses.  It's not entirely clear where, but at some point Tupper Lake transitions to Raquette Pond.  Most kayaks can pick a path through much of the marsh.  A marked channel also accesses Raquette Pond.  Exploring the marshes is a great way to avoid wind and spot waterfowl hiding in the grasses.

I have also accessed Tupper Lake from its southern most point.  There are no official access points at the southern end, but paths lead to the lake with rough access by Bog River Falls.  While there are a few coves and islands to explore, this part of the lake features the most open water.  The  wind tends to create more chop on this part of the lake with few places to escape it.  On a calm day, it's worth exploring.  Most of the coves are lined with homes however.  Reaching the first large island requires long travel over wide open water which is often quite rough.  The views of the surrounding mountains make for a nice backdrop.

The highlight on the southern end of the lake is Bog River Falls.  The Bog River flows into the lake's southern point.  A series of slides and a high volume, rocky plunge mark the transition from river to lake.  This area see a lot of traffic as a swimming hole during the summer.  Many people use the upper falls as a natural water slide.  Be aware of motorboat traffic since it seems to be a popular place to view the falls.

Raquette Pond connects to the northern end of Tupper Lake and the transition between the two isn't obvious.  When driving through the village of Tupper Lake, Route 3 travels along the town park.  Raquette Pond sits just beyond the park.  We can see the pond from our front door and its only a five minute walk to it.

Raquette Pond features a large open area in its main body.  Wind usually blows across the water, making it quite prone to choppy conditions.  Because of the large marsh between the main lake and the pond and less developed access, the pond doesn't see as much large motorboat traffic.

Paddling from the park, the pond extends nearly two miles to its outlet on the Raquette River.  A railroad bridge marks this transition.  The water between the park and the river is wide open and often rough water.  Beyond the pond, into the river, also feature still water due to a dam and can be combined with a paddle in the pond.


The marshland between the pond and lake can be a fun place to explore.  On windy days, the grasses block the wind and offer refuge from choppy water.  The campsites mentioned above are also easily accessed from the pond.


The view from Raquette Pond is quite nice.  Paddling into the open water toward the outlet gives a vast view over the town toward numerous mountains.  The Seward and Santanoni Ranges dominate.  The Mckenzie Range towers north of the High Peaks.  From the pond's vantage point, the Adirondack's second highest summit, Algonquin Peak can be seen without obstruction.

Raquette Pond's best feature is its sunsets.  Most evenings the winds die down leaving the pond quite calm.  A casual evening paddle on the still water just before dark capped off with a sunset is hard to beat on Raquette Pond. 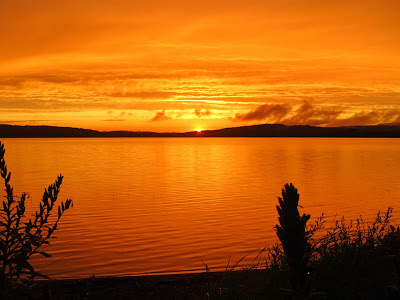 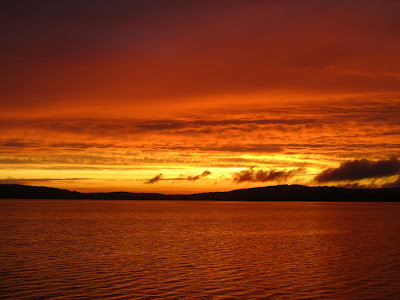 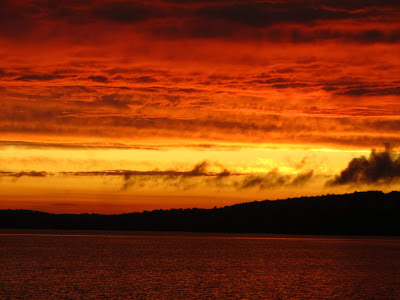 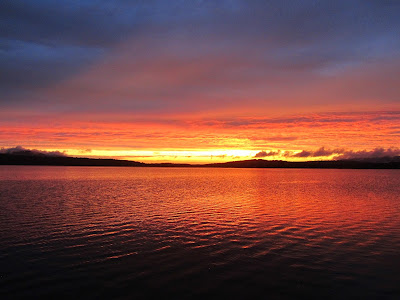 Simon Pond sits to the east of the main body of Tupper Lake.  A bridge on Route 30 marks the separation of the two bodies of water.  While Simon Pond can be accessed from the main lake boat ramp, the best access is a dirt launch along Lake Simond Road.

The Raquette River flows into Tupper Lake and the mouth of Simon Pond.  Simon Pond has been described as a flood plain for the river.  Simon Pond is much longer than it is wide.  The pond extends about 2.5 miles from the bridge to its inlet.  The pond is fairly developed on most of its shores.

Generally I have experienced less wind on Simon Pond when the other two parts of the lake have been much choppier.  From the boat launch, I typically paddle toward its inlet.  A public, undeveloped island sits near the inlet which seems to allow camping.  Beyond the island, marshland leads to the inlet stream.  I have been able to paddle a short distance up the inlet until debris made passage too difficult.  A couple of small coves can be explored, but houses are usually visible.  Where the river flows into the pond, a larger bay leads into marsh that can be explored without houses.  It's also possible to paddle up the Raquette River from the pond.

Like Tupper Lake and Raquette Pond, the pond offers nice views of the surrounding mountains.  Simon Pond, sitting further to the east, doesn't have quite as far reaching views as the other two bodies of water.  I have seen bald eagles while paddling Simon Pond on at least two occasions.

I will definitely continue exploring other bodies of water by kayak in the region.  I'm glad to have Tupper Lake and its ponds as a quick paddling option.  I have taken advantage of these lakes numerous times over my first few months living in the area.  I enjoy the mountain views from the lakes.  Nearly every outing, I've experience calls from loons and spotted various waterfowl.  These ponds aren't secluded but they allow Puma and me to get a quick kayaking fix whenever we want to hit the water.