Kayaking the Bog River with a Swimming Moose

The Bog River serves as the southern inlet to Tupper Lake.  While at one time it flowed freely, a pair of dams now creates a large section of flatwater.  Low's Lower Dam creates the first stretch of flatwater closed to motorized boats. Above the river's mouth at Tupper Lake a short stretch of flatwater river also provides a short quiet water paddling opportunity.  Puma and I paddled both these sections in the past few weeks.

Puma and I set out to explore the section of river between the dams on October 8th, 2019.
Initially the river remains narrow above the dam.  Nice cliff formations and rocks line the banks in the narrows.  Soon the channel widens with numerous sections of marshy shoreline.  The route seems to have several passages, and may not seem obvious.  After paddling upstream the correct line usually stands out.  The water remains quite shallow with the weedy bottom usually visible.


The river passes under a rail bridge as it makes its way to Hitchins Pond.  Hitchins Pond is wider section of the river just below Low's Upper Dam.  The pond stretches a short distance to the north, but the main route continues south toward the Upper Dam.


While paddling through the pond, I commented to Puma how the habitat seemed appropriate for moose.  Minutes later, I saw something large and dark on the right shore.  It moved, and sure enough it was a moose.  We remained at a distance so it didn't return to the woods.


After looking toward us, it entered the pond.  It must have been on a mission because it kept going.  We watched for about five minutes as the moose swam across the pond to the opposite shore.  As it exited the water, it shook itself off.  It stopped and looked at us, almost posing for one last photo.  It casually wandered out of sight into the woods.  Living in Maine, we have both seen moose in the wild.  This encounter was a truly unique experience however.  We never saw a moose take to the water and swim.  It's difficult to see in the photos, but the moose had small antlers and was likely a year old bull.  The next series of photos captures the moose from shore to shore.  Click on the photos to enlarge them.  Also notice the foliage in the background on the fourth photo. 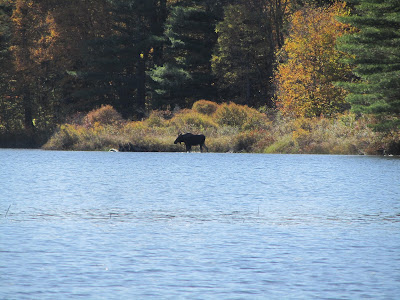 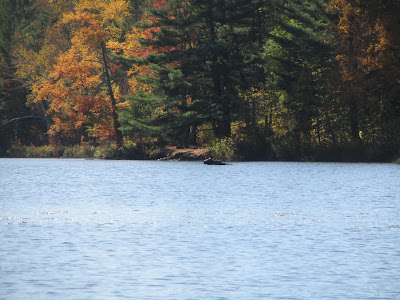 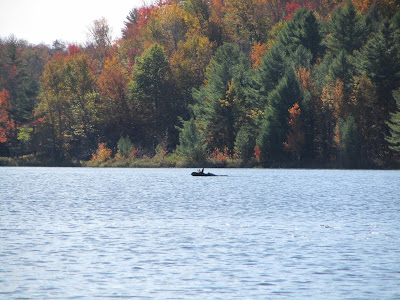 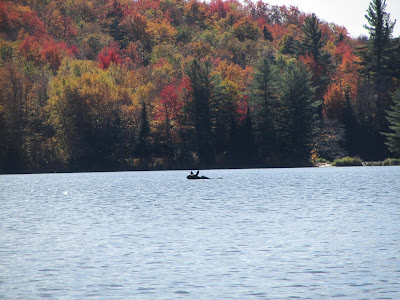 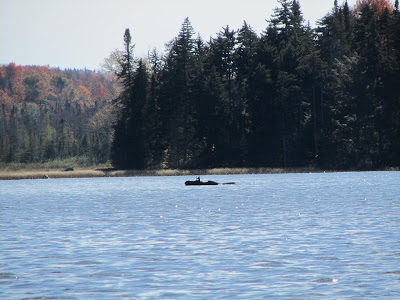 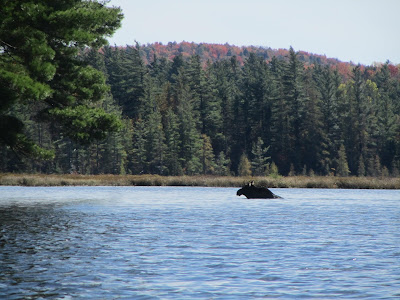 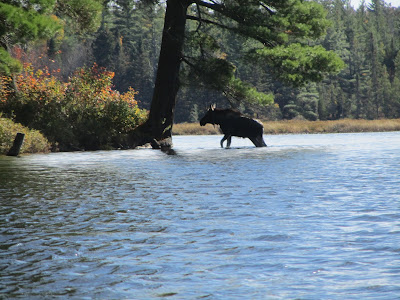 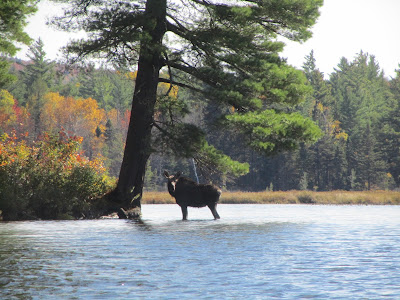 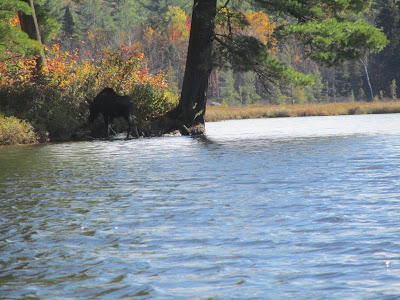 After enjoying our moose encounter, we continued to the Upper Dam.  We explored the area around the dam on foot. Numerous old stone foundations stand around the dam site.  A hiking trail also climbs to the ledges above offering a view of the lake and surrounding area.  It's possible to continue above the dam on Low's Lake.  The lake features dozens of campsites and makes a great extended paddling destination.

On our return, we visited the north end of Hitchins Pond.  We casually paddled back to the lower dam covering about 6 miles roundtrip.  Our early October paddle came just in time for colorful foliage.

The Bog River offers flat water paddling above its outflow into Tupper Lake.  Above Bog River Falls, flat water allows paddlers to navigate upstream about 2.5 miles.  At this point the river hits rapids and upstream paddling becomes too difficult for a leisurely outing.  For a casual river paddle one can cover 5 miles roundtrip from the falls.  A light current allows for an easy return trip.


The river in this stretch remains mellow.  A few sections of rocks give the otherwise placid water a little bit of feature.  Despite the rocks, the current remains calm. The river travels through a mixed forest with the occasional marshland along the shoreline. We hit this section of river as the leaves were starting to get some color.

While this section of the Bog River goes by quickly, its work checking out if you are looking for a shorter outing.  In the summer, the falls at the start and finish of this outing make a nice place to swim.  Although we didn't fish, it seems like a nice river to paddle casually, while casting a line every now and then.