Backpacking in the Bigelows

Dustin Putt, a friend of mine from Pennsylvania, was visiting Maine.  He gave me a call to spend a couple days on an outing.  He was looking for a trip that involved a night of camping.  Last time he was in Maine we hiked Katahdin, including the Knife Edge.  This time I suggested a trip to the Bigelows.  They are among the most interesting and scenic mountains in Maine after Katahdin with several spots to camp on an overnight backpacking trip.

The Bigelow Range is a beautiful set of mountains.  The highlight of the range are the 4000 foot summits of West Peak and Avery Peak.  They are among the highest in Maine and offer summits above treeline in an alpine setting.  The 360 degree views from both summits are among the best in Maine.  On a clear day, the view stretches from Mt Washington in New Hampshire to Katahdin in Maine, over 330 miles of the Appalachian Trail are visible.

There are several trails to hike in the Bigelows with the Appalachian Trail as the centerpiece.  Initially, our plan was to ascend via the Horns Pond Trail.  Logging activity closed the road so we parked on Maine 27 and approached via the AT, which adds a little more distance to the hike.

There are many scenic spots in the Bigelows.  About five miles into the hike, we reached Horns Pond.  This is a small 3 acre tarn that sits at the base of the twin peaks of North and South Horn.  There is a nice viewpoint overlooking the pond with both peaks rising behind it. 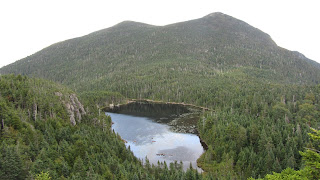 The Horns beyond Horns Pond

The peaks of North and South Horn are the next feature along the AT.  Almost immediately after passing the pond, the trail climbs steeply up these peaks.  3805' North Horn is the first peak reached by following a short side trail off of the AT.  The bare summit just barely pokes out above the trees and offers 360 degree views.  The peak of its twin, South Horn, is less than a half mile away.  Horns Pond sits at its base and giant Flagstaff Lake sits more than 2500' below  The most stunning view is that of West Peak's pointy summit towering just two miles away.  The view from the South Horn  is nearly as attractive as its twin's view. 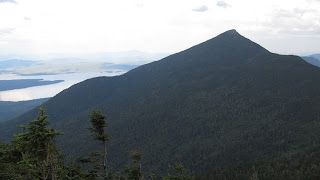 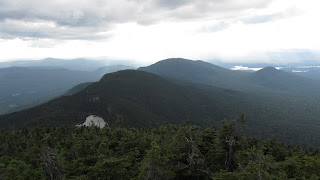 Horn Pond below North Horn with Cranberry Peak beyond 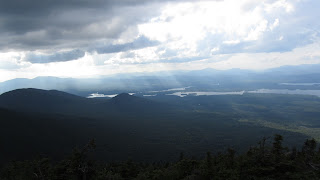 Sun peaking through the clouds 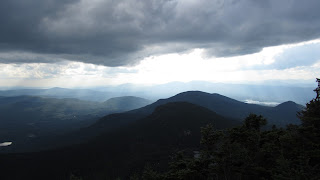 The western peaks of the Bigelow Range from South Horn 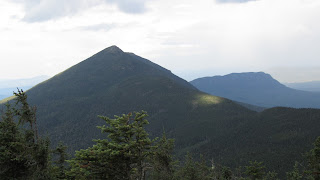 Two miles beyond South Horn, the summit of West Peak is reached.  At 4150', this is the apex of the Bigelow Range.  The alpine summit of West Peak rises above treeline and has one of the best vistas in Maine.  Avery Peak stands just a few feet lower, less than a mile away.  The entire length of Flagstaff Lakes sits at its base to the north.  On a clear day, nearly every mountain range from Mt Washington to Katahdin is visible. 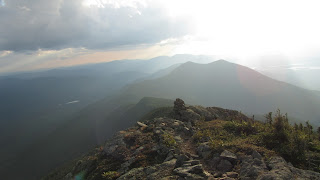 Looking back at the Horns from West Peak 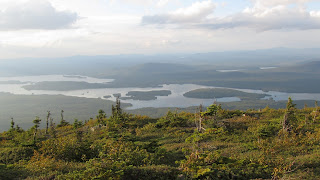 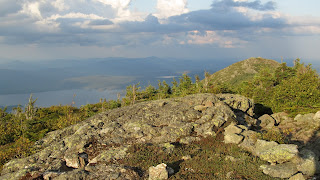 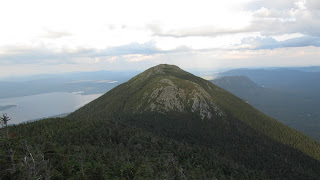 A closer look at Avery Peak

Bigelow Col sits between West Peak and Avery Peak, 8 miles from our starting point.  This is where we stopped the first night.  This is possibly the highest official camping site in Maine.  There are several tent platforms in the area and a couple of water sources.  From our tent platform we had a nice view of Avery Peak's cliffs. Cliffs on Avery Peak from our campsite

Our first day on the trail went smoothly.  We hiked just over 8 miles.  A few sprinkles fell but nothing that lasted more than a minute or so.  The views were somewhat obscured by haze but we still had decent visibility.  As night approached, a few more sprinkles fell.  We were slightly concerned when a few bright flashes of nearby lightning lit the sky.  The flashes seemed to be moving away from us however.  Shortly after we turned in for the night, it sprinkled a few more times, but none of the showers lingered.

Saturday morning we got a fairly early start.  We left our gear at the tent site and headed to Avery Peak less than a mile away.  Avery Peak is nearly as stunning as West Peak.  The haze from the previous day was gone and we had perfect visibility.  The morning air was crisp, probably in the mid 40s with a steady breeze.  We took in the views for quite a while before heading back to our gear.  We descended the Fire Warden's Trail.  Where the Fire Warden's Trail ends, a short walk on a dirt road brought us back to the AT less than a mile from our starting point. 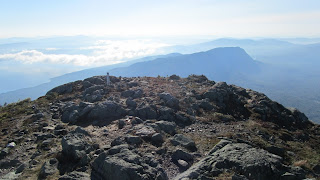 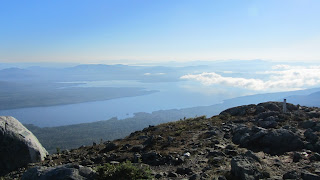 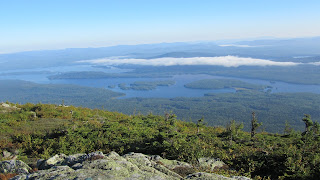 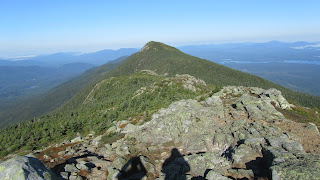 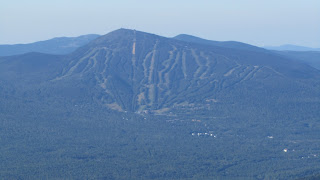 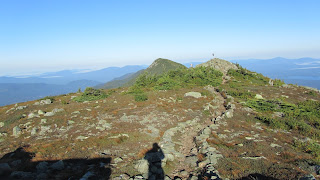 This was my 5th trip to the Bigelows.  The route we hiked is a loop of just over 15 miles.  Putt seemed happy with the trip selection and I'm always pleased with a hike in the Bigelows.  As we hiked out on Saturday morning we saw several groups hiking up the Fire Warden's trail, the most direct route to Avery and West Peak.  On our first day however we saw only two AT thru hikers, a group of day hikers, and two other long distance AT hikers camping at Bigelow Col.  Not many people for a decent summer day in one Maine's most scenic mountain ranges.