I've been cross country skiing a fair amount this winter.  This past weekend I was out three days covering somewhere between 35-40 miles.  Friday and Saturday I did a local loop that goes around the north side of my town pretty close to my house.  The distance is somewhere in the 15-16 mile range and uses a series of snowmobile trails.  The two main trails are fairly quiet but the connector trail can be quite busy.  The loop involves a nice variety of rolling terrain through mostly woods and a few short stretches of field.  The snow coverage has to be fairly fresh or the conditions are pretty nasty.  I last did this loop on New Years Day and conditions were miserable at best.
Last Wednesday we had about six inches of snow so I gave this loop a try Friday around noon when the temperature reached a balmy 5F (It didn't reach 0 until about 10am up from -12 earlier).  It's amazing how much heat you produce XC skiing as even in this frigid weather I wore only a base layer for a shirt.  The temperature did get up to a toasty 9F at the peak of the day.
With the new snow, the skiing was pretty nice despite a few areas of thin cover.  With the single digit temps and subzero windchill I didn't see an entire soul all day.  I had about an inch of ice hanging from my chin by the time I finished.
A fresh dusting of snow Saturday morning inspired me to hit the same trail that morning.  Being a warm 15F and a weekend, I did cross paths with a few snowmobiles but they basically just groomed the trail for me.  I even saw another skier.  The fresh snow sweetened the conditions.
Saturday night saw another 3 inches of snow.  I decided go out on skis again.  This time I skied in logging lands north of Sebec Lake in Barnard, ME.  In the winter this place is pretty isolated.  I skied here last weekend in hopes of possibly finding moose antlers or seeing a moose since they are fairly common here. I was out of luck.  The skiing was not the best.  Fog settled and warm air came with it hitting the upper 30s making the snow very sticky.  I constantly had  scrape accumulation off the base of my skis.  The fog did lift though and besides a few moose and snowshoe hare tracks, I had the place to myself.  After an 80 minute trudge I covered maybe 2.5- 3 miles before turning back.  This area is backcountry and I had to break about 8-10 inches of recent snow as most of these trails are not used in winter.  I made it back to the car in less than an hour since I retraced my old tracks. I think this shorter trek is even more exhausting than the longer town loop. 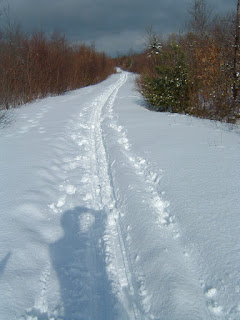 With the exception of a few moose and hare tracks, only my ski tracks as far as the eye can see.