On Sunday January 27th I headed to Greenville, Maine in the Moosehead Lake region with the J Man to XC ski on the AMC trails.  The AMC (Appalachian Mountain Club) owns a nice tract of land in the 100 Mile Wilderness based around wilderness lodges that offer all forms of man powered outdoor recreation.  In the winter, XC skiing is the main draw.  Most people will come in and ski to the lodges where they pay to stay and have there gear shuttled, nice meals, and warm beds.  I use this area regularly in the winter since they have somewhere around 80 miles of XC ski trails that are almost all groomed and entirely free.  Despite the fairly full parking lot, while on the trails it is rare to see anyone else. The area is nestled between three sets of mountains (Lily Bay Range, Barren-Chairback Range, and White Cap Range) and is quite scenic.  It's my favorite place to xc ski.
The J Man and I decided on skiing in towards Little Lyford Pond Lodge.  There is a loop near there called the Indian Mountain Circuit that goes around Indian Mountain that we never skied so we decided to try it. It turned out the be one of the more challenging trails in the area with some steep and windy sections.  Part way into the loop is a side trail that climbs Indian Mountain to an overlook called Laurie's Ledge with views reaching Katahdin and the northern 100 Mile Wilderness.  It is to narrow and steep to ski so we hiked to the viewpoint which was only 1.5 miles roundtrip. 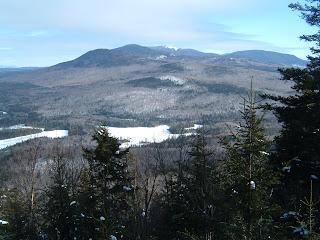 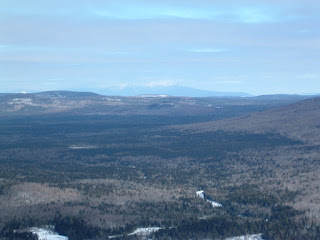 After leaving the summit we continued on skis around the mountain and it was clear not many used the trail, if anyone, in a long time.  The last section of the circuit heads on an ungroomed backcountry trail that was not broken this year.  Since J Man was tiring, I took the lead and broke the trail.  I had fun on this trail. It was fairly narrow and hilly making it a nice challenge from the groomed trails although I think it pushed the tired J Man a hair too far perhaps.  The loop ends on the trail we came in and we returned back to the parking lot on the same trail on which we started.  Including the 1.5 mile hike the total trip was about 16 miles.  Conditions were among the best I skied all season.