St Patrick's Day brought many ski deals throughout New England.  Some resorts were offering $17 lift tickets.  Attitash and Wildcat in New Hampshire were among these resorts.  Best of all the two resorts are 20 minutes apart and a lift ticket is good at both mountains and they are decent ski areas.  Since Puma was working all day I decided to make the trek to New Hampshire for the day to take advantage of the deal.
.
An early start got the J Man and me to Attitash just as the lifts started for the day.  Attitash is a fairly large ski area with 67 trails and a respectable 1750 foot vertical. There are two separate mountains to ski,  Attitash and Bear Peak.  Attitash is slightly higher with a little more vertical but both offered some nice groomed cruising runs. I wasn't sure what to expect since its elevation is rather low but I was pleasantly surprised.  Only two of its trails were roped.  They have a pretty extensive snow making system so the conditions were pretty good considering recent warm temps and rain.  Most of the trails were groomed and managed to stay in good shape through mid day.  The glades were pretty much bare and unskiable so I didn't hit them.  The day was consistent top to bottom skiing fast skiing on groomers.  The mountain never seemed to get icy despite cool temps below freezing.  The mountain was somewhat crowded given the nice clear day and $17 lift tickets but the wait in the lifts wasn't too terribly long.  For more info see http://www.attitash.com/

Shortly after noon we headed up to Wildcat.   I skied there before and it is a fum place to ski when the conditions are good.  It has 49 trails and over 2100 vertical feet of skiing.  The main lift is one of the fastest in the east taking you base to summit in about 6 minutes and every run takes in the 2100 feet of vertical.  The other impressive feature of Wildcat is the view.  Wildcat sits on the east side of Pinkham Notch directly across from Mt Washington and the Presidential Range.  The views are among the best from any ski area in the east.

The recent warm up, rain, and lack of snow made for some icy conditions.  Windy conditions and morning skier traffic added to the iciness.  My skis are due for a tune up so I was having some difficulty navigating some of the ice.  There was a blowing snow falling with some cloudiness which made for decreased visibility making it difficult to see some of the ice.  With the blowing snow and clouds we missed out on that great view unfortunately.

Despite the ice it was still fun making the fast top to bottom runs. We made nearly two hours worth of runs before calling it quits.  about 8 runs were closed due to poor cover, mostly black diamonds.  You can ski lots of vertical feet in a short time on some fast runs at Wildcat which is fun.  I recommend skiing it soon after a good snow to help avoid the ice.  In my opinion Wildcat isn't the most challenging ski area.  Many of the runs have a similar feel after a while.  The view and the ability to ski lap after lap with lots of vertical per run is Wildcat's strong suit. For more info see http://skiwildcat.com/  I was pleased with the skiing for the day overall and having to pay only $17 for two ski area,  you just can't complain. 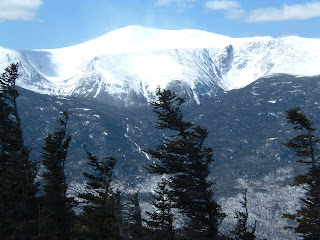 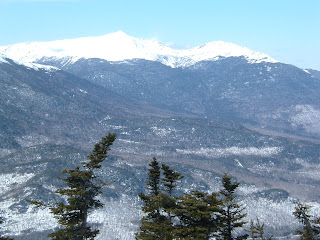