Springtime Fun in the Snow

The last day of winter ended with about 13 inches of snow falling at my house with more in some surrounding areas.  This was the biggest snow we had this season.  The first part of March was on the warm side with much of the snow pack melting.  With the new snow I was eager to get back outside to do some snowsports.  Since last Wednesday I was able to get out four times.

Last Wednesday and today Puma and I snowshoed.  We have 20 acres of land that is mostly wooded and are surrounded by woods.  We have a couple of trails in the woods that where we start, then we explore the woods, making our own paths.  Both days we wandered for about an hour.  Wednesday was much tougher with fresh powdery snow.  The snow has melted quite a bit since then and was much more compressed making for easier going tonight.  It's nice to explore and see the untouched snow and woods.  We usually see some sort of animal tracks in the snow.  Tonight we saw coyote and snowshoe hare tracks. 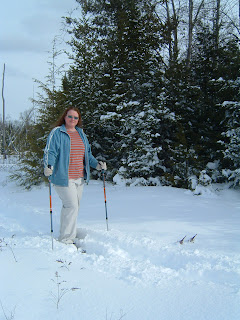 
On Saturday I headed to Big Moose Mountain (AKA Big Squaw Mtn) to snowshoe.  Big Moose is just outside Greenville, ME overlooking Moosehead Lake.  This mountain is about an hour from my house and takes in some beautiful views of the country surrounding the Moosehead Lake region.. It is the nearest hike with such views and I hike several times each year.  This trip I covered only about 5 miles round trip but it gains nearly 2000 feet to the summit.  The trail was unbroken since the snowfall.  About midmountain the snow cover was about 30 inches and the summit had some drifts well over 4 ft deep.  There is some fairly steep stretches making this trip quite a workout in the virgin snow.  On a clear day the summit views are far reaching.  Snow showers on the horizon obscured  the distant peaks. However, there was some nice views of Moosehead Lake which still looks very much like midwinter.  About half way to the summit there is a section that has lots of moose tracks and bedding sites.  I have yet to see a moose here in my many travels to the mountain despite the obvious moose traffic. 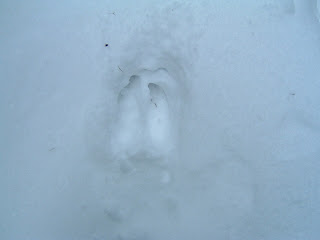 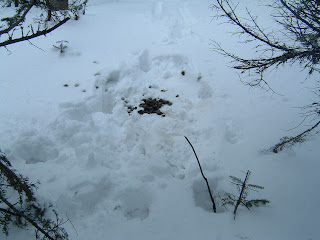 Moose bedding spot in snow with some moose "nuggets" 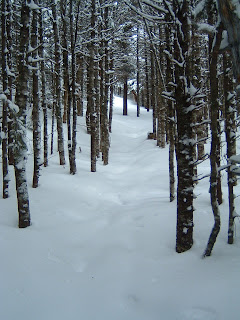 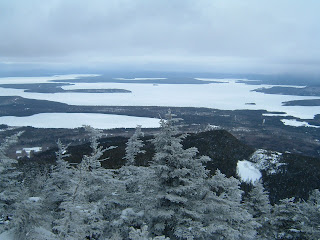 
On Sunday I headed to The Forks, ME.  There is a trail system called the Maine Huts and Trails that runs from The Forks to Sugarloaf.  The total trail system as of now is about 50 miles.  The trail is primarily a point to point trail so you can't make a loop out of it.  The J Man and I decided to cross country ski part of the trail starting in The Forks.  This section is quite hilly and not recommended for beginner skiers.  The trail travels roughly following the Dead River and is quite hilly.  Freezing temps in the morning made for some icy conditions.  However as the day warmed up the snow softened considerably making for some slow going.  With plenty of steep sections and snow conditions that were quite variable, we each had a few falls.  A fast icy pitch would hit a soft patch of snow causing some control problems.  I had less issues as the snow softened with the warmer temps.  We turned around at a set point covering just over 12 miles.  Some of the beginning stretches of trail were starting to get thin cover and bare spots  I would like to try skiing here in more consistent midwinter conditions some time. For info on Maine Huts and Trails see http://www.mainehuts.org/ 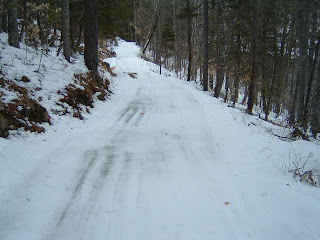 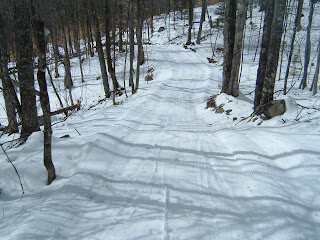