Several weeks passed since my last hike so I was eager to hit the trail.  One of the closest mountains to my house with worthwhile views is Barren Mountain.  I usually hike here a few times a year.  It is the first peak along the Appalachian Trail heading north in the 100 Mile Wilderness.  At less than 2700 feet in elevation, it's not a terribly high mountain.  However, the climb to the summit is fairly rugged along the AT and requires around 2000 feet of climbing and the hike is about an 8 mile roundtrip.  Despite it's low elevation, there is some nice scenery on the hike.

Despite a forecast for clear skies, clouds prevailed Sunday morning.  As the J Man and I arrived at the trailhead, much of the mountain was obscured by clouds.  On the way to the summit the trail passes several rocky ledges which offer good views to the south.  Barren Slide and Barren Ledges were both in the clouds so we struck out on the views there.  About two miles beyond Barren Ledges is the actual summit.  On the summit is the remains of an old fire tower.  The cabin is no longer on the tower but the frame still stands.  While the summit is partially open, it is possible to climb a few rungs of the tower to get a 360 degree view.  (Use great caution climbing as the structural integrity may be questionable)  Upon reaching the summit the trail broke out of the clouds providing some interesting views looking over an area of undercast. (a layer of clouds beneath the summit)  To the south was a sea of clouds below the summit.  In the distance, only the Bigelow Range, Coburn Mountain, and Big Squaw Mountain poked above the clouds.  To the north, the valley along Katahdin Iron Works Road was clear with the peaks of the Lily Bay and White Cap Ranges visible above the shroud of clouds.  Undercast clouds are neat to experience.  It gives you a "on top of the world" feeling.  It provided unique views from a summit that I have been to many times.  The hike returns back to the trailhead on the AT.  The views at the slide and ledges were still obscured when we passed them on the return trip.  By the time we reached the trailhead, the morning clouds burned off and the mountain was in the clear.  It was a little disappointing that weather didn't cooperate but without the clouds we would have missed out on the beauty of the undercast clouds on the summit. 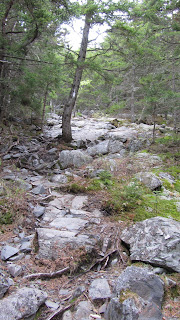 A typical section of rocky trail along AT 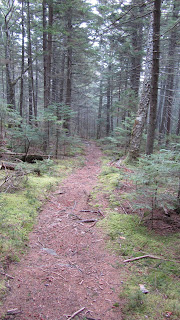 Smooth section of AT in spruce forest approaching Barren Mtn 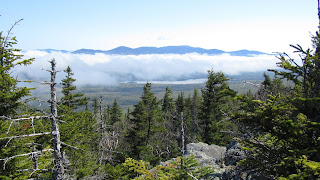 Looking at the White Cap Range poking out of the undercast 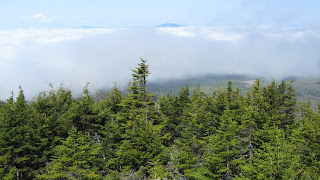 A sea of clouds with Big Squaw (Moose) and Coburn Mtn. peaking out in the distance (Click for larger view)