The weather this weekend was gorgeous and I wanted to get out on another ride on the mountain bike.  I headed to Barnard, Maine and started at the same spot as my ride last weekend.  This time I headed a different direction to ride a favorite route of mine in the area.  This ride follows mostly logging roads that are closed to all motorized vehicles.  It travels through land owned by Roxanne Quimby, founder of Burt's Bees, then passes through land owned by the AMC (Appalachian Mountain Club), then goes on an ATV/snowmobile trail before finishing the last several miles back on the Quimby land.

This ride is truly a wilderness experience.  The ride travels along and around the mountains in the 100 Mile Wilderness.  There is usually wildlife to be seen and several views of the mountains of the Whitecap and Barren-Chairback Ranges. Even with a map, the logging roads and trails can be difficult to navigate.  The best way to learn the complex system of routes is to find someone with local knowledge of the area, then explore on your own.  As my last post showed, even with some knowledge of the area, it's easy to take the wrong path. The terrain is rolling with a few long climbs and descents but rarely technical.  The loop I ride is 38 miles and I didn't see anyone else.  In fact except for a couple of camps near the Katahdin Iron Works area, there is little signs of civilization.

My route starts out on a logging road that used to be used regularly.  Now it closed to all motorized traffic.  After about 8 miles the road is trenched to make it unpassable to any ATVs or Snowmobiles and probably horses.  I very well may be the one of literally a few people that venture to this point each year.  Another old logging road takes me a couple miles to an dilapidated old camp and to a very rough old ATV trail that ends in a field.  A short bushwack through the field brings me to another series of logging roads that is now on AMC property.  The right combination of roads brings me to the Katahdin Iron Works road (popular road with hikers in the area) before immediately hitting a ATV/Snowmobile trail along the Pleasant River.  A few miles along the rivers brings me back to an old logging road back on Quimby land and eventually back to where I started.

While the riding was alright, the highlight of this ride was the moose activity.  I saw four moose on the ride.  A loner about 12 miles from the start.  Another smallish loner about 8 miles later.  Finally about 5 miles from the end I saw a pair of moose.  The first was browsing along the path.  After a few pictures, it grew tired of my presence and disappeared into the woods.  The second was laying down along the edge of the logging road.  I startled it and it jumped up no more than 10 yards in front of me.  In the process it startled me.  Again it lingered long enough for a few pictures before heading off into the woods.

The last two moose were the most amusing of the sightings.  I was descending a steep section that crosses railroad tracks. (Same tracks in my last post)  I had some speed as I crossed the tracks but noticed movement several hundred feet down the track.  I looked over and noticed two moose walking side by side on the middle of the tracks.  I startled them but they didn't move.  I stopped to watch them from behind scrub along the trail.  Slowly they continued down the tracks after they realized I wasn't a threat.  They past me no more than 25 yards away.  I was able to snap a few photos before they got completely out of sight now off the tracks.  I actually see more moose while mountain biking than I do hiking and four isn't even the most I have seen in a single ride. 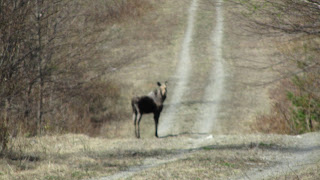 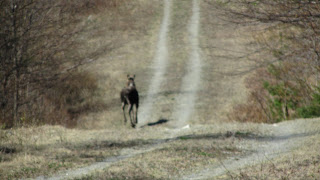 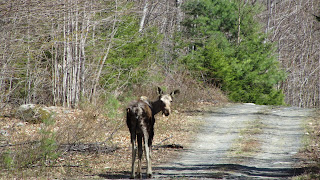 Second moose- a small one 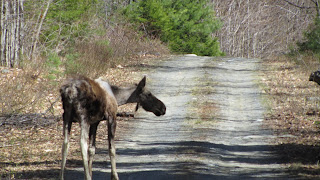 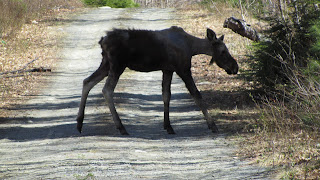 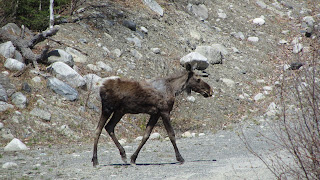 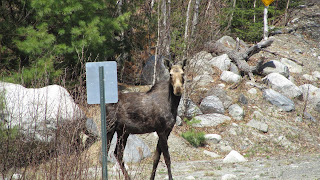 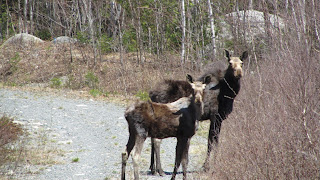 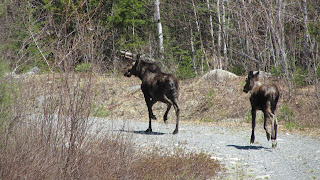 Moose 3 and 4 running away 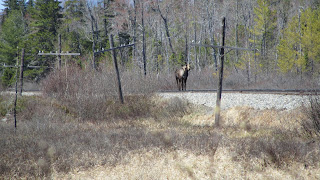 Click for bigger view, Two-headed moose on railroad tracks (or is it just moose 3 and 4 side by side?) 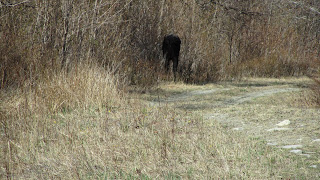 A Sasquatch with its back to me along trail 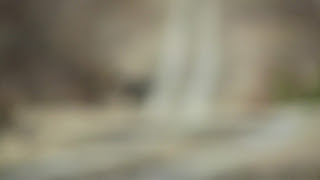 Taking picture as I ride away from charging Sasquatch, I know it's blurry but what respectable Sasquatch photo isn't blurry