At 2630' Moxie Bald Mountain is not very high.  There are 196 higher mountains in Maine alone.  It stands in relatively lonely country near Bingham and The Forks, Maine.  If it wasn't crossed by the Appalachian Trail, it probably wouldn't see very much traffic.  In fact even with the AT crossing it, it still doesn't see much traffic.  Apart from long distance hikers on the AT, it appears that this place is seldom visited.

The hike to its summit is moderately challenging but relatively tame compared to Maine's bigger peaks.  The summit of the mountain is fairly open with good views in most directions.  I have been here twice before.  The first time was in 1999 when I hiked the AT.  Last December I hiked it for a second time with most of the trail covered with snow and ice. 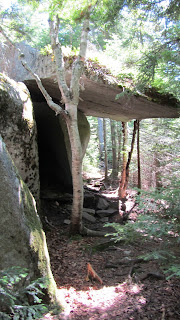 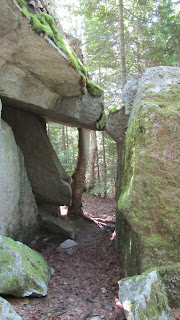 Another rock formation along AT 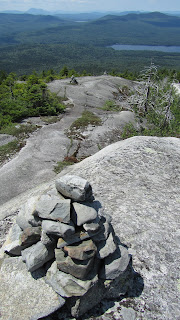 Looking back down AT near summit of Moxie Bald


When I crossed Moxie Bald Mountain on my AT thru hike, one memory comes to mind.  The blueberries were abundant.  Most of the low vegetation on its broad summit consists of blueberry bushes.  I leisurely crossed the summit stopping to grab handfuls of blueberries during my thru hike.  That memory is what inspired me to hike the mountain again this weekend.

The J Man went along on the hike and we both brought containers along to pick berries.  Shortly before reaching the summit, the trail begins traversing terrain with few trees.  Almost immediately we found blueberries.  We stopped at the more concentrated clusters to gather berries and would move on to the next cluster when we depleted the ripe berries in an area. 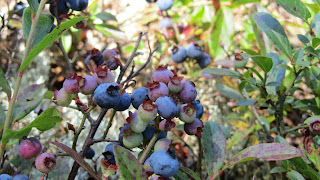 One of many clusters of blueberries with many more to ripen

About a mile beyond the summit is a side trail to the north peak of Moxie Bald Mountain.  I never hiked here before and didn't know too much about this other summit.  The only information I had was that the side trail was about 3/4 of a mile long and there is abundant blueberries in season.  This was no lie.  There were huge clusters of ripe berries frequently along the trail.  We both filled our Cool Whip containers well before the summit.  After our containers were filled we continued to pick more to eat on the spot at the patches with heavier concentrations.  I never seen so many wild blueberries in my many years of hiking. 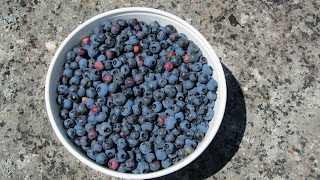 The berries weren't the only attraction.  It was a beautiful day and the views from Moxie Bald Mountain are quite nice and far reaching.  Little did I know they got better at the north peak.  The north peak consists of a nearly mile long open, rocky summit with 360 degree views.  Judging by the lack of wear on the trail, very few people venture to this peak.  AT hikers usually don't bother with a 1.5 mile detour for an understated view and the locals usually summit the main peak and turn around.  Any guidebook with the description of hiking Moxie Bald barely mentions the north peak.  The trailhead to this area is a 20 mile round trip on a dirt road. I'm guessing that deters others that might consider hiking here. 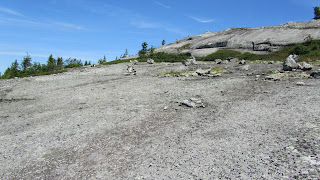 Approaching the summit of the north peak


I was pleasantly surprised at the far-reaching and unobstructed views that went from Katahdin to the peaks in the Grafton Notch area, not too far from the New Hampshire border.  Nearly the entire 280 miles of Appalachian Trail in Maine.  The peaks of the Bigelows are fairly close and unmistakable.  Just past the Bigelows, the trails of Sugarloaf Ski Area are visible.  Immediately to the north are the peaks of Moosehead Lake, including, Big and Little Moose, the Spencers, and the Lily Bay Range.  Just east of the Moosehead is all of the 100 Mile Wilderness peaks.  To the northwest mountains on the Canadian border can be seen. Several ponds are visible just below the mountain and countless other summits.  This area, particularly the north peak is great hidden secret of Maine mountains and a good place to find solitude and in season, amazing wild blueberries.  With only modest elevation gains and just over 7 miles of hiking, this hike is short enough that you can hike leisurely and enjoy the views and the berries. 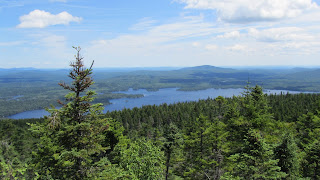 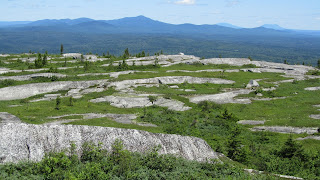 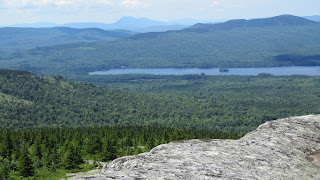 Moxie Pond with Bigelows in background 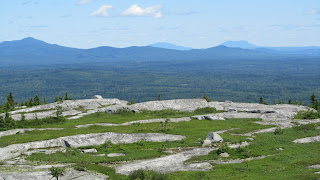 Big Moose on left and the Spencers in distance 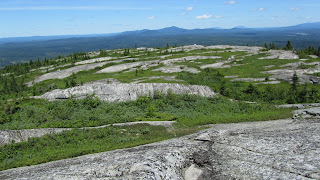 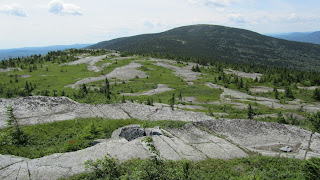 Looking toward Moxie Bald from the north peak 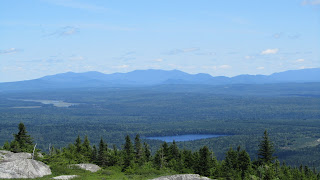