The Owl- Hiking One of Maine's Overlooked Gems

I have hiked in Baxter State Park nearly two dozen times now.  A majority of these involved a climb of Katahdin which is Maine's highest peak.  Most people visiting the park focus on Katahdin.  Many of the other peaks in the park are overlooked by visitors.  One of these peaks in The Owl.

The Owl was on my radar for a while.  The J Man and I headed to Baxter State Park Sunday with intent to hike either The Owl or South Turner, another overlooked mountain in the park.  When the parking lot for South Turner was full when we arrived we set off for The Owl.

The Owl, at 3700 or so feet is a stunning peak.  It is located just about two miles from Katahdin as the bird flies and sits across Witherle Ravine from the Hunt Spur of Katahdin.  Hikers approaching Katahdin via the Hunt Trail (AT) have The Owl at there shoulder.  The side of The Owl most people see is a large cliff band that with a little imagination, resembles an owl.  The summit of the peak is open and offers views in all directions. 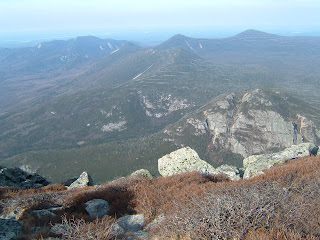 From an earlier hike, The Owl from the Hunt Trail.  The rocky mountain in the foreground.


The trail to The Owl starts at Katahdin Stream Campground.  For the first mile it follows the Hunt Trail before splitting off onto The Owl Trail.  The trail climbs gradually  most of the way.  The trail doesn't get too steep until well over two miles into the trip when hands are needed to climb at a few of the steeper spots.  Along the way views into the ravine and to the Hunt Spur are sporadic.  Eventually the vegetation thins, taking in views toward Katahdin while looking across the sheer cliffs of The Owl.  Most of the way the roar of Katahdin Stream can be heard.  As you enter the scrubbier vegetation high on the peak, waterfalls are visible in the distance dropping into the ravine. 3.3 miles and over 2600 vertical feet later the summit is reached.  In a few weeks, the summit will have a nice crop of blueberries. 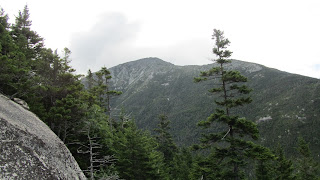 One of the first views toward Katahdin 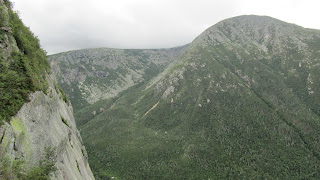 Looking across Owl's cliffs toward Katahdin 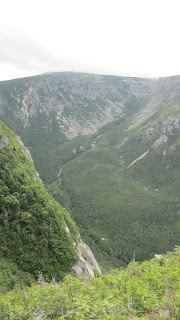 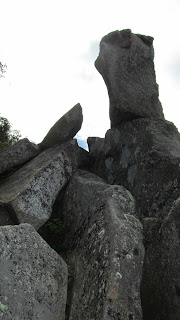 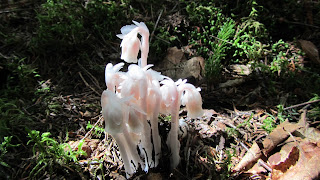 Indian Pipes along the trail 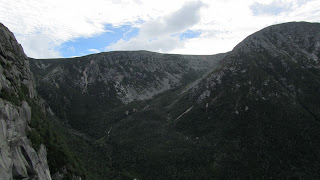 Looking toward the Tableland 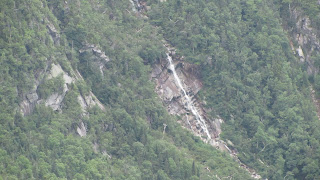 Waterfall below in the ravine

The views from the summit are impressive.  In the distance to the south, the peaks of the 100 Mile Wilderness are on the horizon.  Closer at the base of the mountain are Kidney, Daicey, and numerous other ponds.  The mountains around Moosehead Lake are visible to the southwest.  It was somewhat hazy today and I could easily see as far as Big Moose Mountain near the southern end of Moosehead Lake.  To the west are other nearby peaks in Baxter State Park are in sight including Barren, Coe, The Brothers, Doubletop, and Moose Bosom just beyond the park boundary with Chesuncook Lake in the distance.  The north is dominated by the Northwest Plateau, Hamlin Peak, and Katahdin.  The Hunt Spur is immediately east with the lakes heading toward Millinocket visible beyond the Hunt Spur. 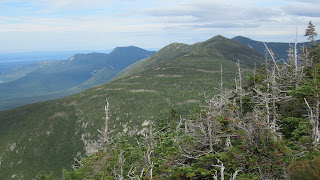 Barren Mountain in the foreground, Doubletop and Moose Bosom to left and Coe just behind Barren 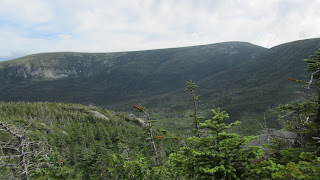 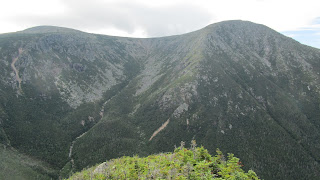 Another look in ravine, the slash is Katahdin Stream flowing down from Thoreau Spring 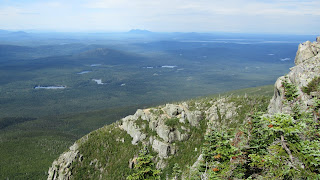 Looking over ridge of Owl over Daicey and Kidney Ponds area 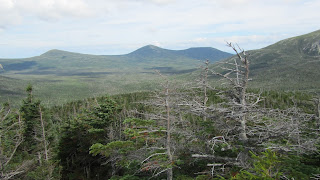 The Brothers and Fort Mountain


I highly recommend hiking The Owl to anyone visiting Baxter State Park.  On weekends in the summer, Katahdin can be a zoo.  As we looked over to the Hunt Trail we could see numerous groups hiking to Katahdin and the sign in sheet at the trailhead was full of people going to Katahdin.  We saw only one other group on the trail to The Owl.  It is a scenic summit that you can have to yourself.  At less than 7 miles round trip it will leave you with a little to spare. 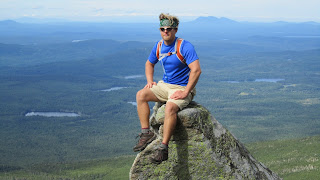 Me sitting on "Balancing Rock" 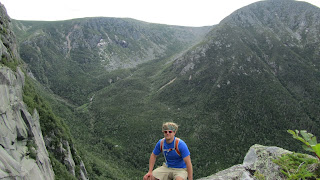 Me sitting on edge of Witherle Ravine below The Owl