Hiking the White Cap Range- Solitude in the 100 Mile Wilderness

White Cap Mountain is located on the Appalachian Trail in the heart of the 100 Mile Wilderness. Because it's the first time north bound thru hikers get an unobstructed view of Katahdin, it is a memorable mountain to many thru hikers.  The views are quite impressive in all directions. I am also drawn to this mountain since I see it nearly everyday when I drive to my house.  In the winter, its white summit stands out prominently among the other mountains in the area.

Getting to White Cap is not an easy feat.  Because of its location in the 100 Mile Wilderness, road approaches are somewhat difficult.  The shortest approach to White Cap from the road is via the White Brook Trail.  Depending on road conditions and the vehicle, a round trip hike of 5 miles is possible to the summit and back.  This involves more than 16 miles of travel over increasingly rough dirt roads that can be difficult to follow on a map it you are not familiar with the area. The summit can be reached by the AT from the north on a 6 mile round trip hike but the drive to the trail is even further away from civilization.  From the south on the AT, it is nearly a 12 mile hike to the summit from the nearest road.

I have hiked to White Cap a couple times via the White Brook Trail.  This hike is straightforward but not worth the abuse to my vehicle.  I haven't been to White Cap in about four years and wanted to revisit.  I have not hiked the other summits on the AT in the White Cap Range since my AT thru hike in 1999 and wanted to hike them again as well.  After looking at some maps, I found a loop that would take me over all four summits of the range by connecting the AT with other trails and logging roads.  The route would avoid driving the worst dirt roads.

My hike would cover more than 20 miles.  If you have read my blog in the past, I enjoy the occasional long day hike, so I was up for the challenge.  To add to the challenge, I was faced with a short November day and the start of winter conditions.  Saturday's forecast sounded promising so I got an early start and headed to the mountains.

I  started my hike near High Bridge about 710AM.  High Bridge is a drive in camping area.  I followed a logging road about two miles to its end at Hay Brook where there are a few campsites.  A short side trip upstream along Hay Brook took me to Hay Brook Falls, a scenic waterfall with a drop of about 30 feet.   After stone-stepping across Hay Brook, the Pleasant River Tote Road begins.  The Pleasant River Tote Road is a relic from logging days and is now a trail.  After .75 miles, the AT is reached.  With the exception of a short detour at Gulf Hagas, I was on the AT for the next 11 miles.  This was also the lowest point of the trip at 700 or so feet in elevation. 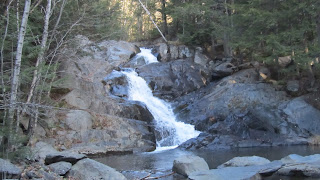 The trail stays relatively low in elevation for a while.  Where the AT section starts, it passes through an area of old growth forest called The Hermitage containing very large pines.  In a little over a mile I arrived at the trail to Gulf Hagas containing numerous waterfalls.  I made a brief detour to Screw Auger Falls, just a short distance from the AT.  The trail meandered with little significant climbing as it followed Gulf Hagas Brook.  As I hike higher and deeper into the mountains, a dusting of snow started to cover the trail.  The trail reached a lean-to where I stopped for a bite to eat. 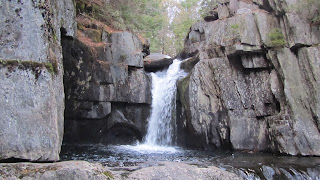 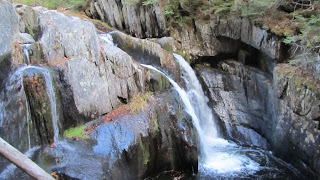 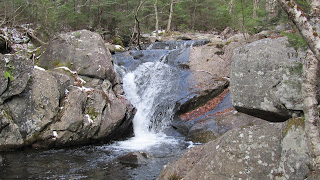 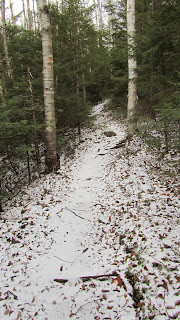 Snow starting to cover the trail

After the lean-to, the trail finally started to climb steeply.  Gulf Hagas Mountain is the first mountain climbed in the White Cap Range.  At 2683', Gulf Hagas Mountain is the runt of the range.  Despite its lowly elevation, it is probably the most interesting summit after White Cap.  Some partial views of the surrounding mountains are seen through the trees from the higher reaches of the mountain. 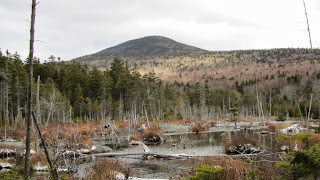 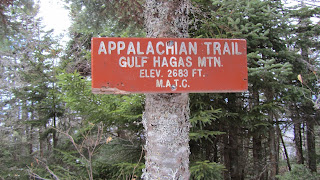 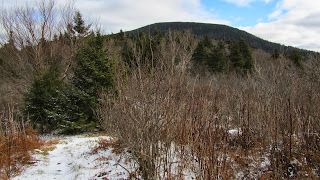 The AT continued over West Peak and Hay Mountain.  The mountains became progressively higher as I hiked.  Trail crews did an impressive job building stone steps on the steeper sections of trail. The trail never seemed to steep compared to most other mountain ranges on the AT in Maine.  West Peak and Hay Mountain have wooded summits with very few views beyond the thick forest. 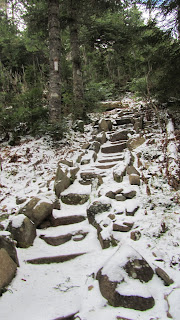 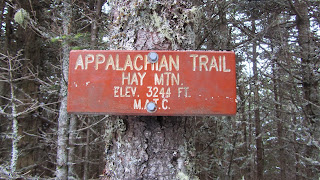 After 11 miles on the AT, I reached White Cap.  At 3654', White Cap is the highest mountain in the 100 Mile Wilderness.  It's the highest summit on the AT between Katahdin and the Bigelows, a distance of 180 or so miles.  White Cap's summit has wonderful views.  The southern half of the summit is completely exposed and bare.  Scrub covers the top of the peak while the northern part has another open area.  Looking to the north on  clear day, Katahdin dominates the horizon.  Parts of Moosehead Lake are visible to the west as well as most of the higher peaks in the area including the Spencers, Lily Bay Range, and Big Moose.  To the south, the Barren-Chairback Range dominates the view.  In the distance to the southwest, the Bigelows are easily identifiable.  With a temperature in the mid 20s F and windchills dropping below 0F with gusts, I didn't linger more than 15 minutes at the summit. 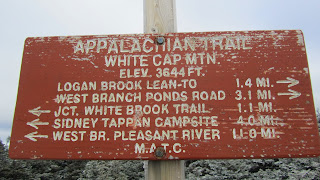 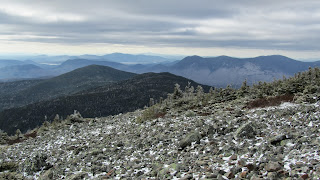 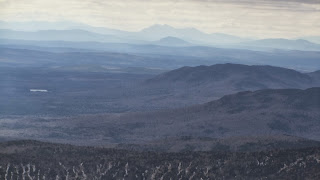 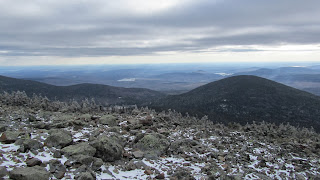 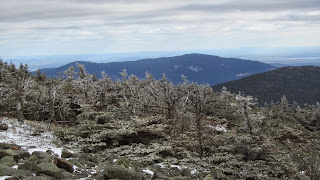 Saddleback Mtn beyond the shoulder of Little Spruce Mtn 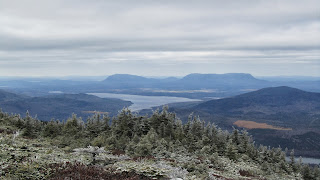 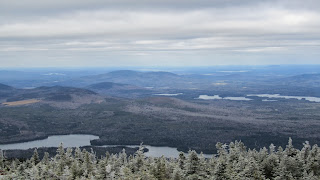 I retraced the AT for a short distance before descending to the valley.  I descended on a discontinued trail that eventually reaches the White Brook Trail.  The trail, which I have used in the past, has become quite overgrown at places.  The trail had occasional old blazes in blue and white.  It must have been an old section of AT at one time.  At one time a fire tower stood on White Cap.  Perhaps this was originally the old trail to access the tower.  I soon reached the White Brook Trail. 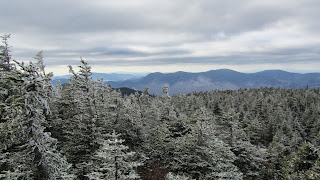 Last view descending back down White Cap toward Baker Mtn 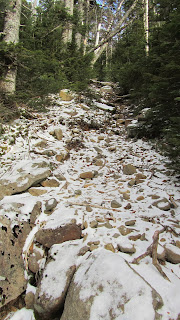 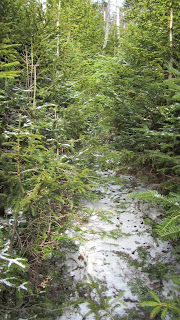 Very overgrown section of discontinued trail.  I was full of snow passing through here.

The White Brook Trail ends at an old logging road.  The logging road was overgrown and a little difficult to follow at a couple of spots.  Eventually the logging road became more prominent before reaching High Bridge near my car in a few miles.  Along the logging road there were some good views looking back at White Cap. 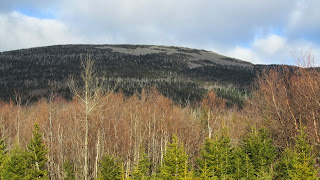 I reached my car right around 3PM, almost 8 hours since I started.  The hike was about 21 miles.  For the distance, the hike wasn't extremely difficult.  Several miles of the hike were on logging roads which allowed for quick travel.  While I gained over 3000 feet of elevation, the elevation gain was relatively gradual compared to other Maine mountains.  The cold and snow however added a little challenge to the hike.  With a brisk windchill, I didn't care to linger in one place too long.  The snow, while not more than a dusting, covered most of the trail. Because of the snow, roots and rocks along the trail were more slippery than normal.

Despite seeing several cars in the High Bridge area, I didn't see anyone the entire time.  All of these cars were most likely hunters.  I did see a few deer early on which made uneasy with hunters in the area.  Because of the snow I saw nearly endless tracks.  Most were snowshoe hare or squirrel.  I did see a few cat tracks, most likely bobcat.  Numerous deer, moose, and coyote tracks were seen in the snow along the logging roads.

Although the forecast called for a clear day, most of the trip was under mostly cloudy skies.  A few short snow showers fell along the way.  Because of the clouds, the views from White Cap were a little obscured.  The visibility was decent most directions but unfortunately Katahdin's summit was in the clouds and obscured by snow showers.