Beautiful scenery is not hard to find in the Moosehead Lake region of Maine.  The lake, nearly forty miles in length, is framed by numerous sets of mountains.  While the elevation of the mountains aren't that high, several peaks rise dramatically over 2000 feet above the lake. The mountains of Moosehead  stand as landmarks in the region and can be seen from many vantage points around the area. Many of the mountains offer beautiful hiking opportunies.  From their summits, far flung views capture the beauty of the region.  Little Spencer Mountain is one of these peaks.

Little Spencer Mountain and its big brother Big Spencer Mountain stand side by side on the eastern side of the lake.  Both are over 3000 feet in elevation with Little Spencer standing less than 100 feet lower than Big Spencer. They rise more than 2000 feet from flat terrain with no nearby mountains.  As a result they are visible from most of the Moosehead Lake area.  They are easy to identify from as far away as Katahdin. 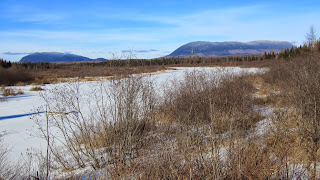 Little Spencer Mountain is one of the most challenging hikes in the Moosehead Lake area.  The first challenge is getting to the trailhead.  From Greenville, you travel nearly twenty miles to the bustling town of Kokadjo, population: not many, according to the sign as you enter the village.  Then it is another ten or so miles on logging roads to the trailhead.  The logging roads aren't labeled so they can be tricky to follow if you are not familiar with the area.  Because of its remoteness, I don't think Little Spencer sees many people, even in summer. 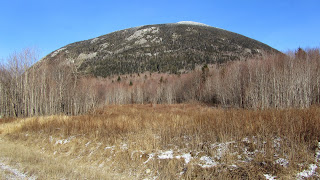 Little Spencer is one of  my favorite hikes in the area.  I went there Saturday because I wanted to get there before snow closed the roads for the season.  The area was still mostly snowless Saturday.  The trail to the summit only travels two miles.  It gains 2000 feet of elevation in that distance and traverses sections of tough terrain. With only one trail to the summit, the hike is only four miles roundtrip, but a very challenging four miles.  Not only does the summit have great views, but there are also far flung views along much of the trail.

From the beginning, there was a dusting of snow on the trail.  This made the already challenging hike even tougher.  Not far from the start, the trail traverses sections of boulders.  Under summer conditions these aren't too difficult, but a coating of snow made the rocks slippery. 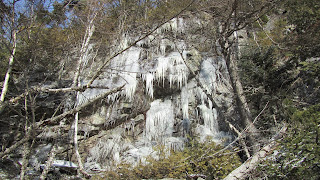 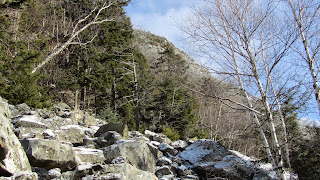 After a couple of boulder strewn sections, the trail reaches its most challenging spot.  The trail climbs through a narrow chimney between two sections of cliffs.  To assist hikers, a fixed rope is in place.  Even with the rope, negotiating the passage can be challenging.  To complicate matters, nearly three inches of rain fell a few days earlier followed by a deep freeze.  This section of trail was nearly all ice.  To make matters worse, the rope was frozen in thick ice at places rendering it useless.  After contemplating passage of the chimney, I tried to bushwack around it.  One side of the chimney is a cliff band.  The other side is nearly as steep but has some trees growing from it.  I tried to ascend with the help of the trees but soon reached icy cliffs and was forced to descend.  Finally, with the help of rope, I managed to shimmy up the chimney, wedging my body against the rocks for friction and carefully finding ice free hand holds. 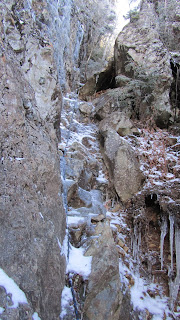 Looking up the chimney 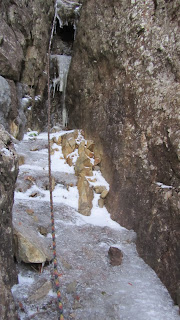 Close Up of ice in the chimney

The rest of the trail to the summit climbs steeply through fields of boulders and follows closely to bands of cliffs at places when not passing through the forest.  The trail levels before reaching the summit.  Despite gaining 2000 feet, there wasn't much more snow at the summit than the trailhead. 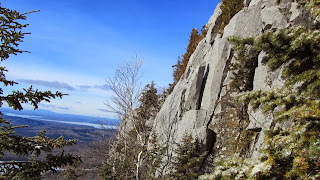 Looking across cliff near summit 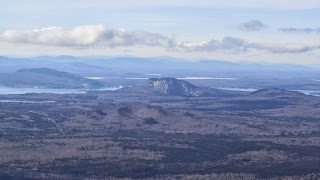 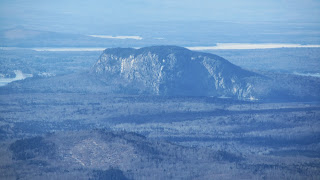 Close up of Kineo

The view from the summit is grand.  The trees seemed to have grown since my last visit here so the view isn't quite 360 degrees, but still quite impressive.  The entire expanse of Moosehead Lake can be seen with all of its mountains surrounding it.  To the northeast, Katahdin poked its white summit above the clouds.  To the southwest, the Bigelows are visible.  Despite a temperature of 18 degrees at the summit, the sun was shining and the air was calm, allowing me to linger without getting cold. 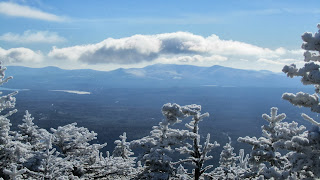 Clouds over the Lily Bay Range 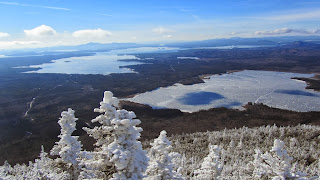 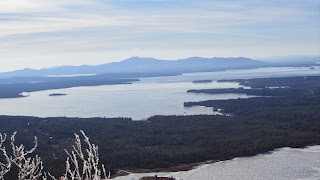 Big Moose Mountain in the distance 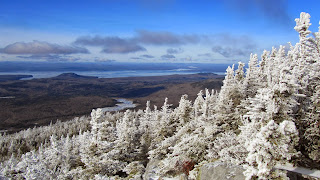 Looking toward north end of Moosehead 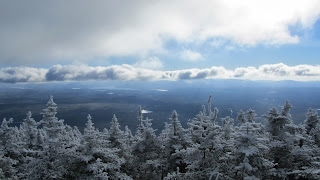 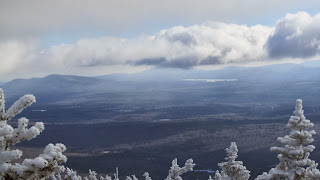 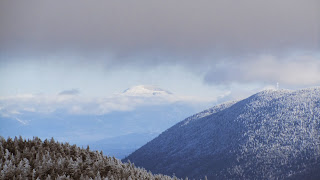 Katahdin over shoulder of Big Spencer 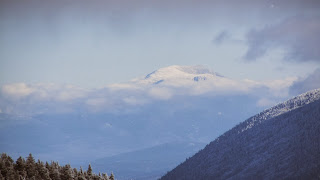 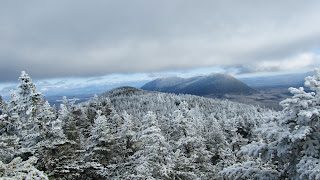 Descending proved much more challenging than the climb.  Numerous short section of icy rock needed to be navigated with caution.  Maneuvering down the chimney required much more concentration than climbing up it.  Roots had enough snow to hide them and make for a slippery surprise.  I did manage to make it back to the trailhead with no falls. 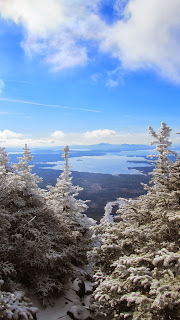 View as I descended the trail 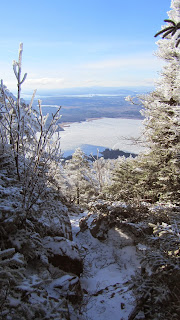 View a little further down trail 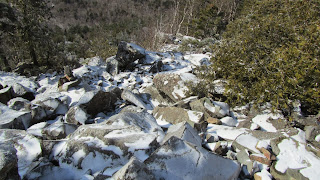 Looking down a snowy boulder field that the trail passes over 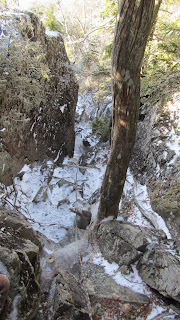 Looking down chimney during descent

I've been to Little Spencer twice in snowy conditions with little problems.  The ice this weekend was almost too difficult to traverse without technical equipment. Crampons were almost necessary to make it through the chimney.  I almost bailed when I got to the chimney and it took a while to make it through.  Despite the added challenge, I'm glad I made it to the summit because the view never disappoints.