Three Days of Skiing in Northern Vermont and Southern Quebec

With March upon us, I was eager to get in another few days of downhill skiing.  My destination this trip was northern Vermont and southern Quebec.  A ski voucher that I purchased early in the season had several ski areas that I could ski.  I chose to ski Burke Mountain on Wednesday, Jay Peak on Thursday, and Owl's Head just north of the border in Quebec on Friday.

My trip started about 4AM Wednesday morning with the four and a half hour drive to Burke Mountain in Vermont.  With little snow the past couple weeks I was expecting conditions to be icy.  I was very pleasantly surprised with the skiing at Burke.  I started the day with a couple of blue groomed runs to get my ski legs.  The groomers skied nicely.  I headed to some ungroomed black diamond trails.  These trails were quite bumpy but the snow was still in good shape and there was very little ice considering the cold temperatures and no recent big snows.  By mid morning I ventured into the glades.  The snow in the trees was tracked out with not a lot of powder but the snow coverage was pretty consistent with just a few rocks or roots.  Birches, a glade on the outer edge of the mountain, was the only glade that had consistent rocks or roots showing.  Wayne's World, a glade just below Birches, had crusty snow which didn't ski great.  With the so-so conditions on Birches and Wayne's World, I passed on The Jungle, which is in the same vicinity.  I had a great time skiing the rest of the glades. 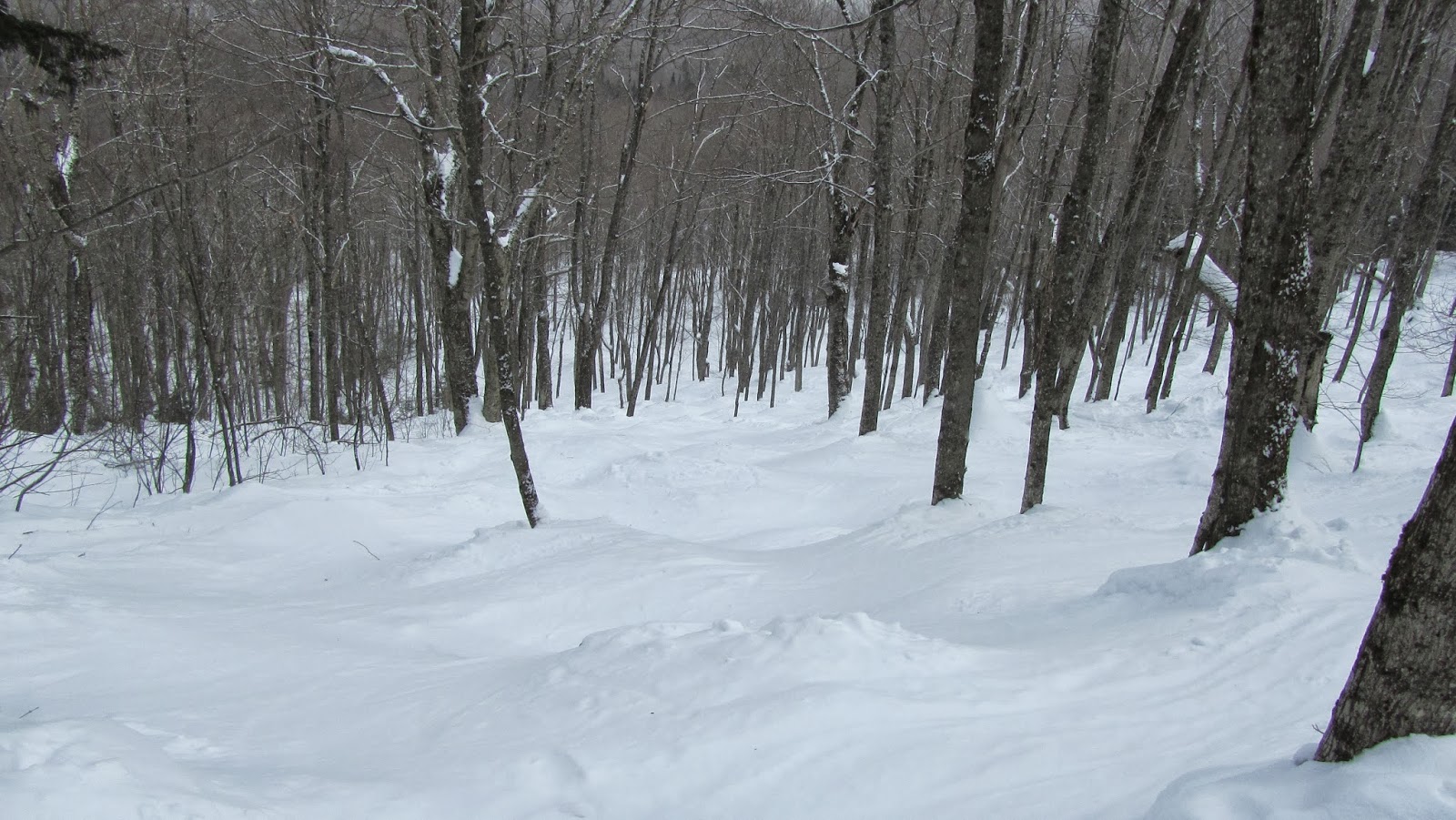 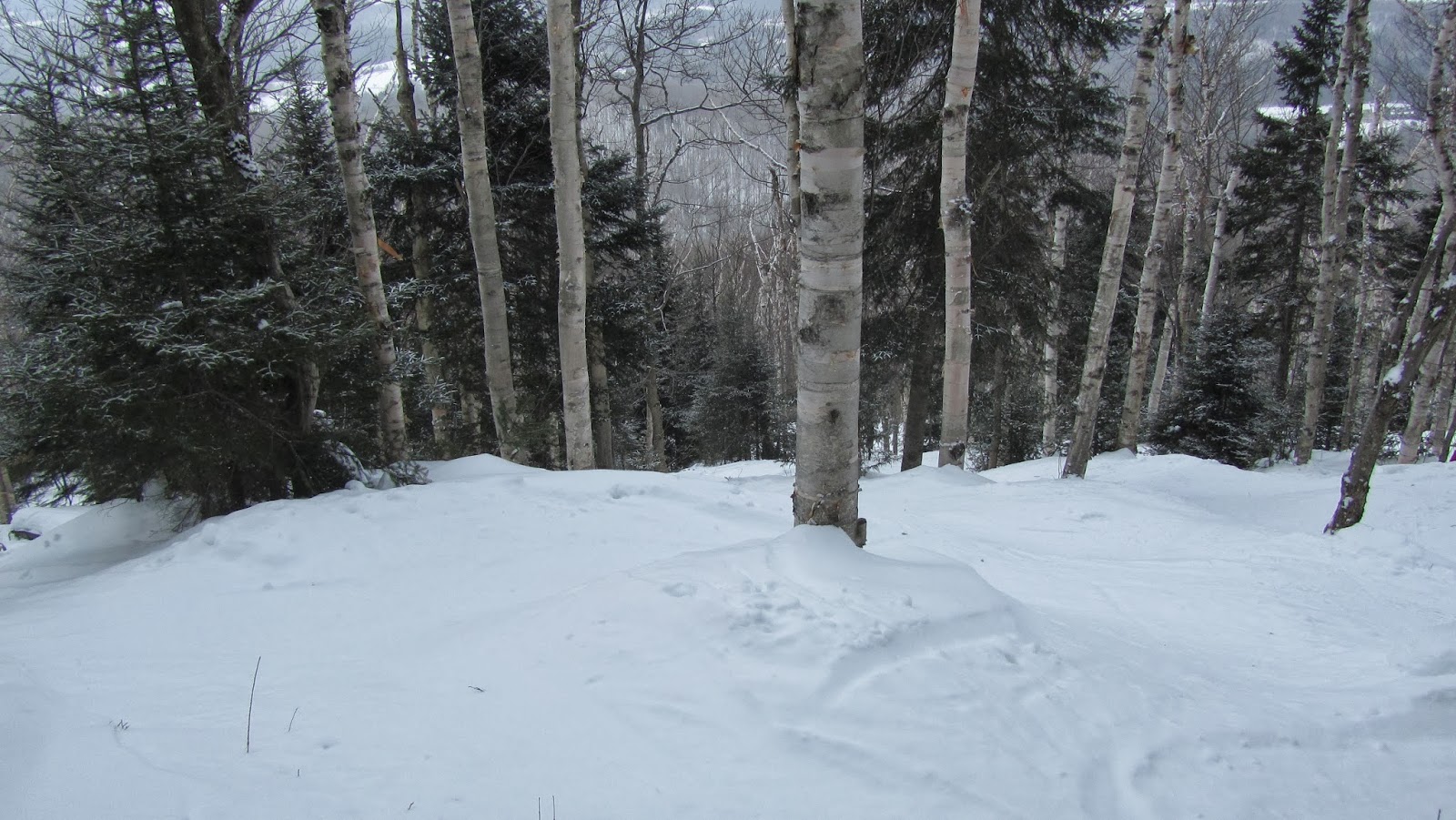 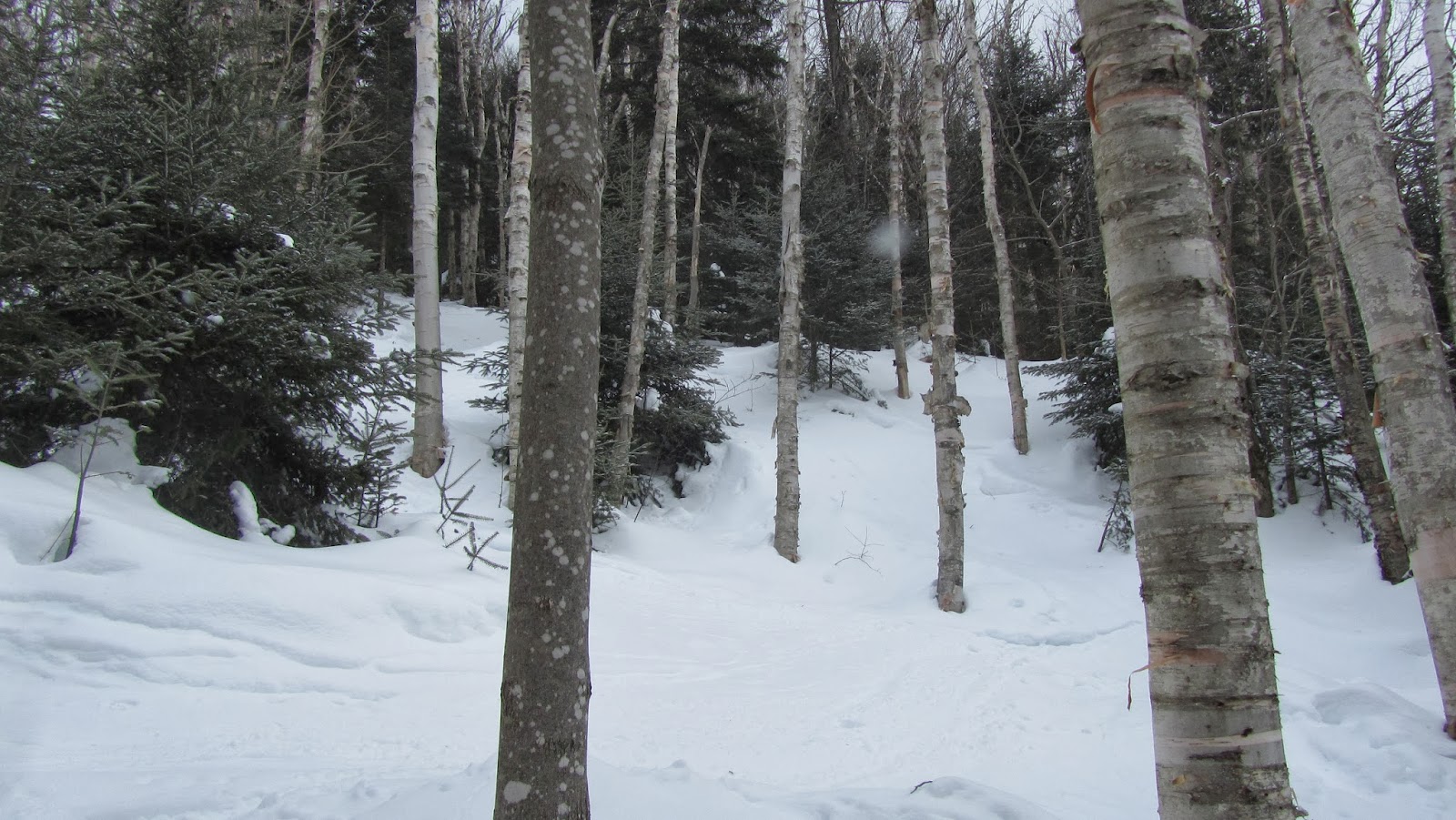 Looking back up Birches

I skied from the time the lifts started turning until the lifts closed at 4PM.  With the exception of the Vermont state slalom races, the mountain was quite empty.  All the racers were based out of the Mid-Burke Lodge and the Poma lift so they never were in the way.  The mountain was 100% open and over the course of the day I managed to ski nearly all the blue and black terrain.  The skiing remained solid throughout the day although the busy Powderhorn and Big Dipper trails started to ice up a little, later in the day.  With over 100 acres of glades, I had a fun day skiing the trees much of the day.  With a little more snow, Burke seems like it would be a great destination if you like skiing the trees.  Liftline/Rerun under the Mid-Burke was one of my favorite runs.  Despite a couple of easily avoidable bare spots, it was a fun run.  Upper and Lower Willoughby were fast and fun groomed runs. 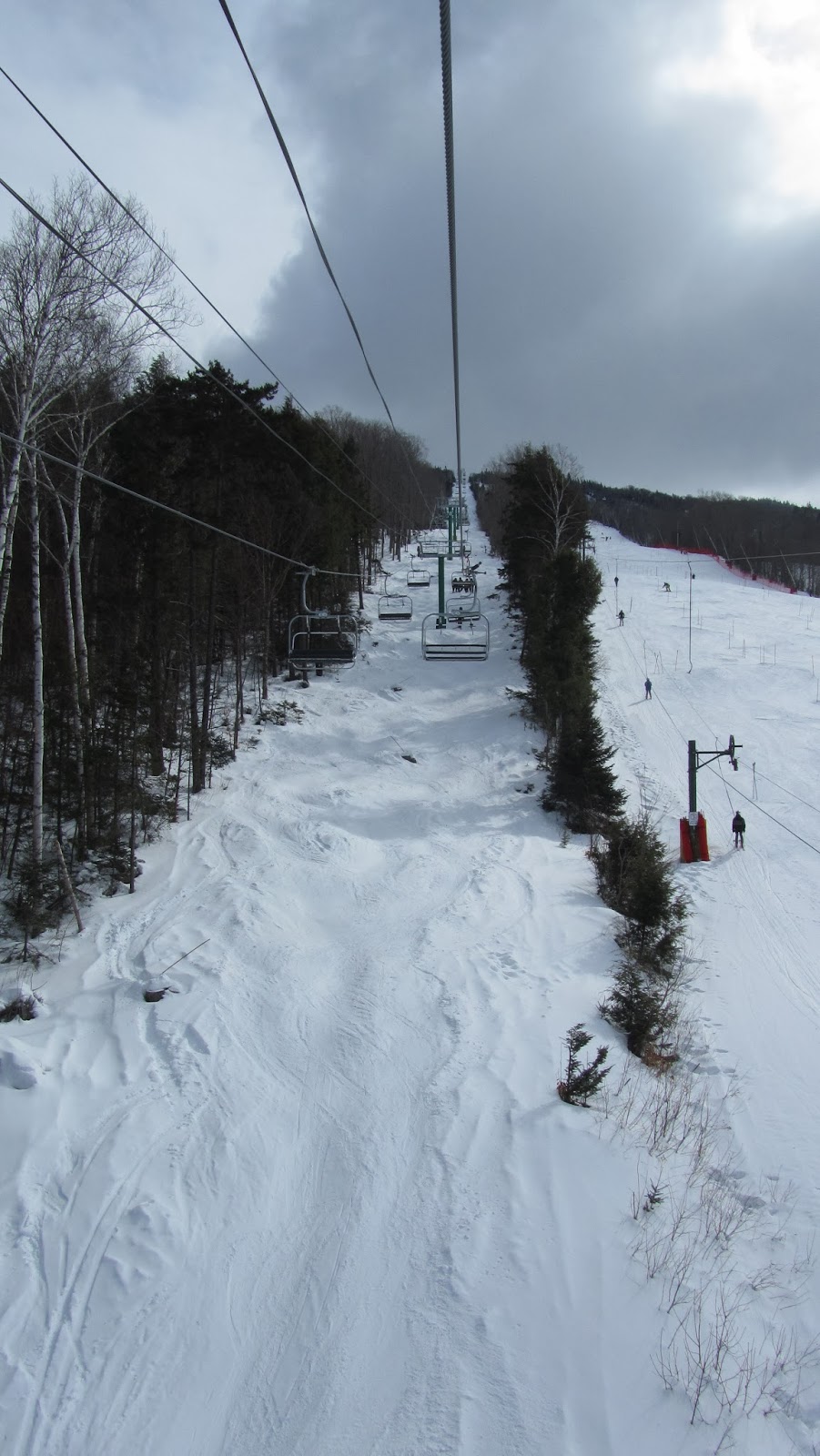 Looking up Rerun from the Mid-Burke Express lift

A half inch of fresh snow fell before I arrived.  This didn't add much to the skiing, although I guess a dusting is better than nothing.  Light snow spitted throughout the day but it didn't seem to accumulate.  The cloudiness caused by the snow showers kept the day on the cold side. There was very little wind however so the day was not too uncomfortable.  The skiing was much better than the last time I skied Burke.  The snow was quite slushy last year when I skied there and there were quite a few bare spots on the trails and woods.  My one complaint with Burke is the flatness.  A couple of sections approaching the Mid-Burke chair are flat and require quite a bit of poling and traversing to get back to the lift.  For the trail map at Burke click the link:  Burke Trail Map

After stopping in Newport, Vermont for a quick meal, I headed to Jay Peak.  I lingered around the resort with nothing better to do until I turned in for the night at my luxury lodging at the Subaru Inn.  The Subaru Inn was just two miles away from the resort at a Long Trail/Catamount Trail parking area along the road.  The temperature was forecasted to be in the -20F range that night.  To anyone that read my last blog post about downhill skiing, I spent two nights in similar accomadations with temps in the -10 to -15F range.  I slept well with my appropriate camping gear.  I don't know how cold it got that night but different reports from the area ranged from -13 to -20F. I had a couple minor problems from the cold. My doors froze causing some difficulty initially getting out of the car.  The other problem was my ski boots.  The plastic was so cold that it didn't expand to get my boot on.  After warming them in the lodge for a bit, I was able to cram my feet into the boots. 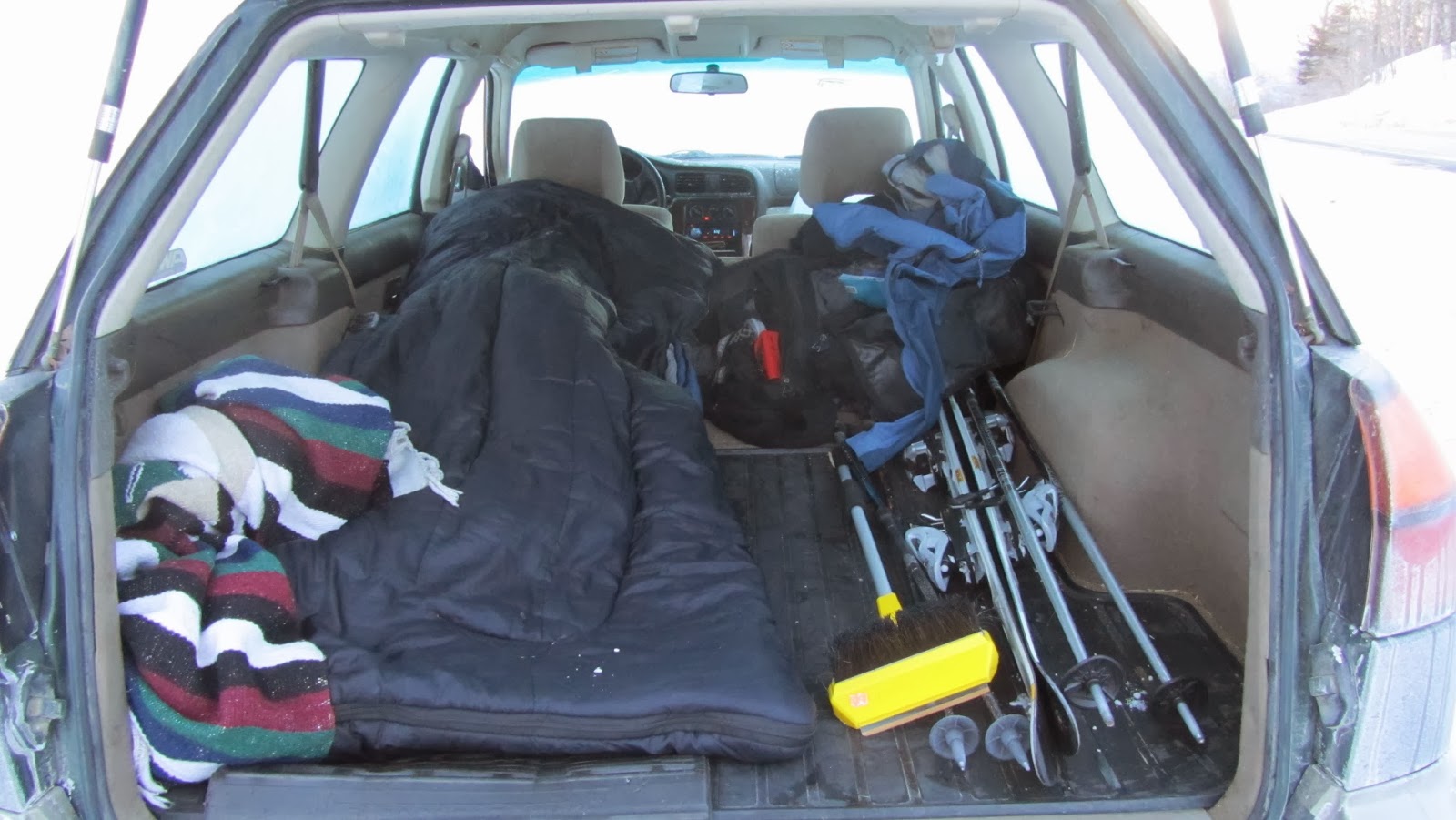 The cozy lodging at the Subaru Inn

Last time I skied Jay Peak it dumped 14 inches of snow throughout the day making for unbelievable conditions.  You could barely see the next chair in front of you on the lift however and the wind blew quite hard making some of the lift rides interesting.  This time there was not a cloud in the sky and zero wind.  I was a little worried about icy conditions.  The mountain skied very nicely however.  I skied once again from opening at 830AM to last lift at 4PM.  I managed to ski every blue and black trail and glade at Jay Peak with the exception of the trails accessible from the top of the tram.

The mountain was busy for a Thursday.  Jay Peak is just a few minutes south of the Canadian border and Quebec had a vacation week so the mountain was full of the sound of more French than English.  The lifts generally weren't too crowed with the exception of the tram which had a fairly lengthy line. 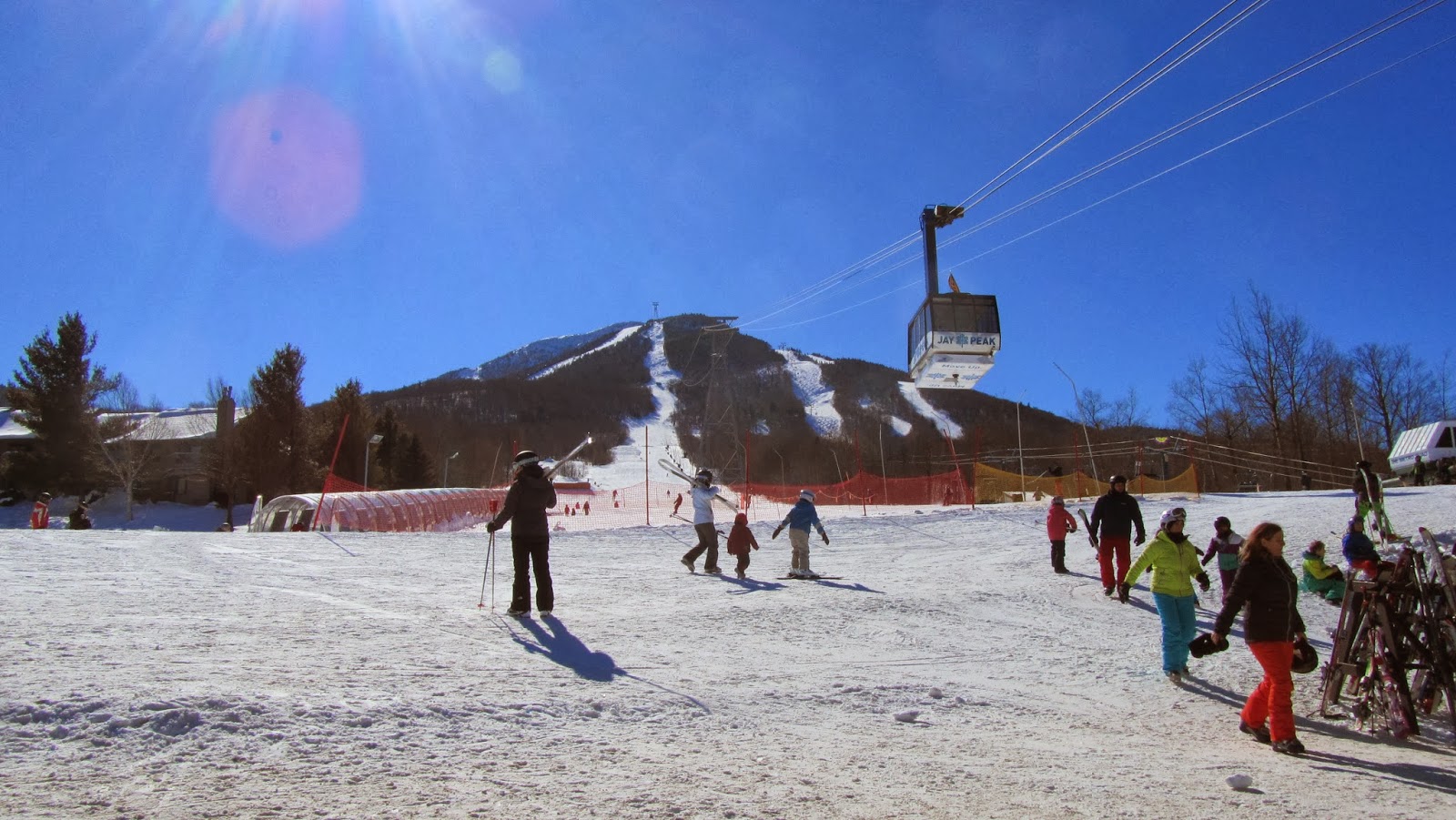 Looking up Jay Peak from Tramside Base

I began my day skiing  the terrain off of the Jet Chair and worked my way across the mountain.  I was quite surprised at how well the mountain skied despite not having a big snow storm recently.  Despite some hard pack conditions there was basically no ice except for a few patches late in the day on Ullr, Goat Run, and other busier trails.  Even steep trails like Can Am remained mostly free of ice throughout the day.  Ungroomed runs with steep pitches like JFK had icy patches that could be avoided by skiing the steeper bumps.  The glades were tracked out for the most part but skied well considering the prior traffic.  Some of the bigger glades still had stashes of fresh snow at places.  The only trail that gave me a hard time was Vertigo, a steep and narrow wooded trail.  It was one of the few trails that had hard to avoid rocks.  With its steepness, lack of good lines, and prominent rocks; it was one of my less graceful runs.  Upper Exhibition and Upper River Quai were two challenging ungroomed runs that I had found enjoyable.  It's hard to pick a favorite tree run since they all skied nicely. 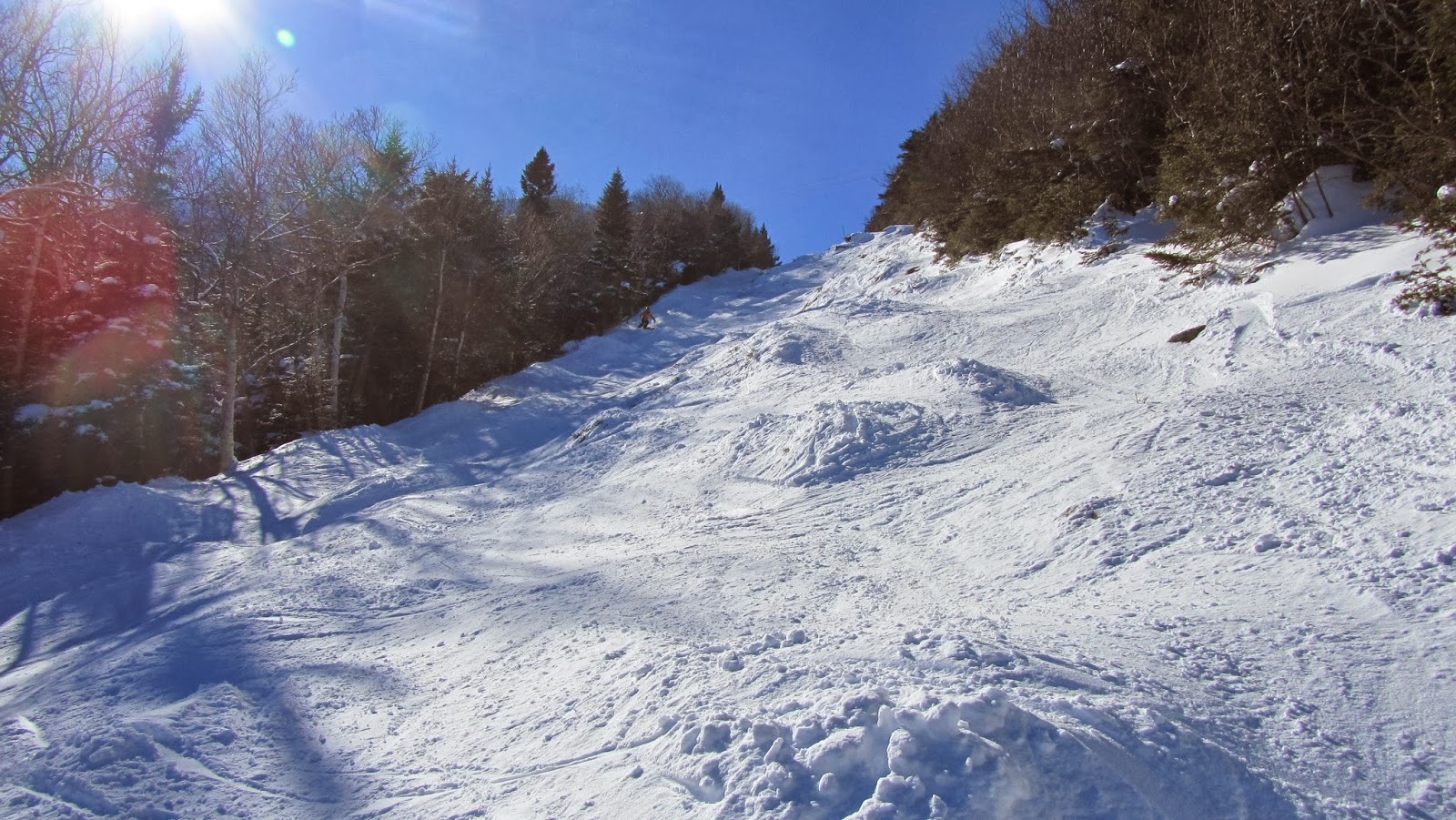 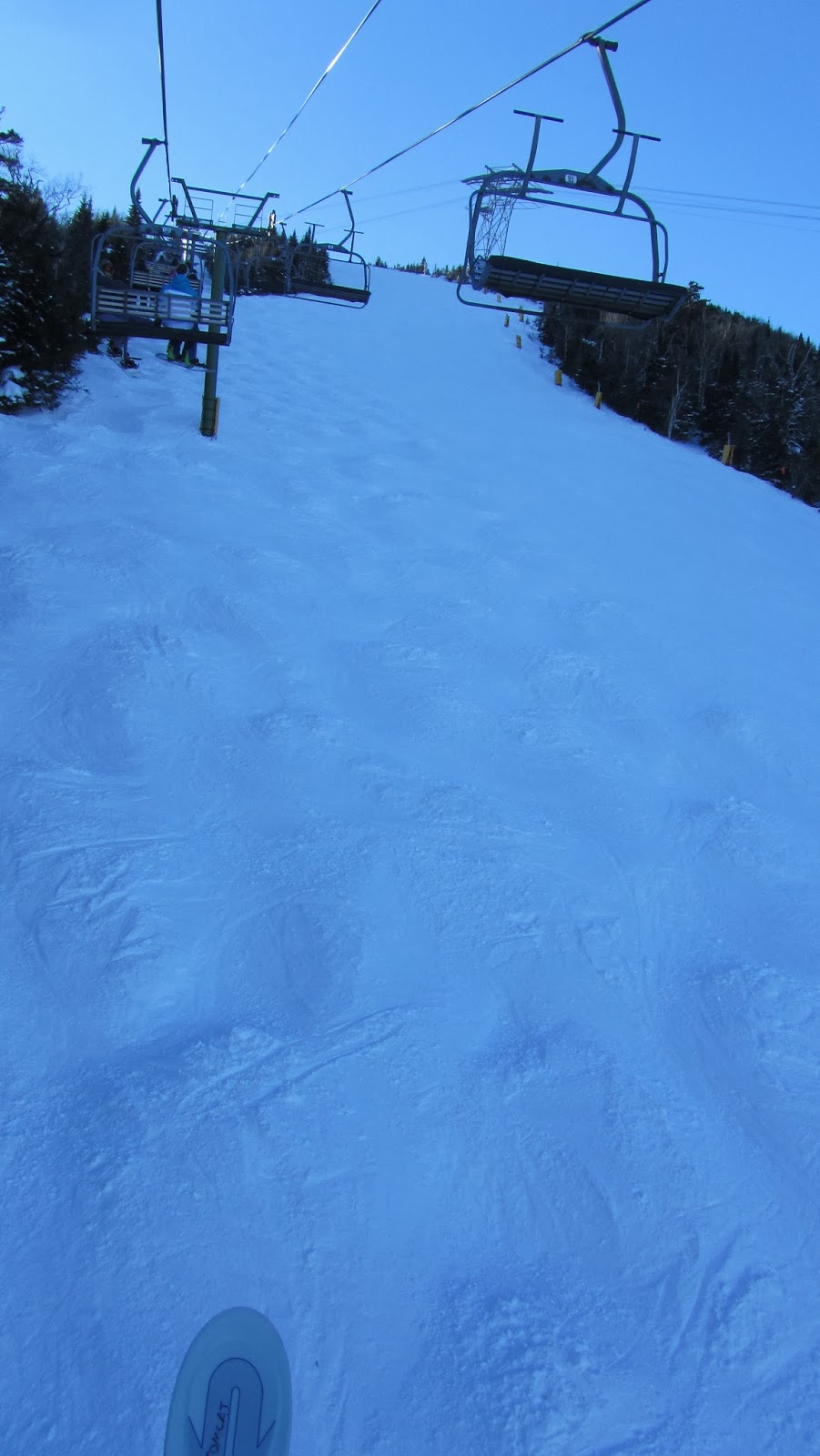 Can Am from the Bonaventure Chair

Because of the crowds, I avoided the tram except for one ride.  I did one run from the top following Vermonter off the summit.  Perhaps the best part of the tram was the summit view on a cloudless day.  The view extended across Lake Champlain into the Adirondacks to the Presidential Range in New Hampshire and well into Quebec. 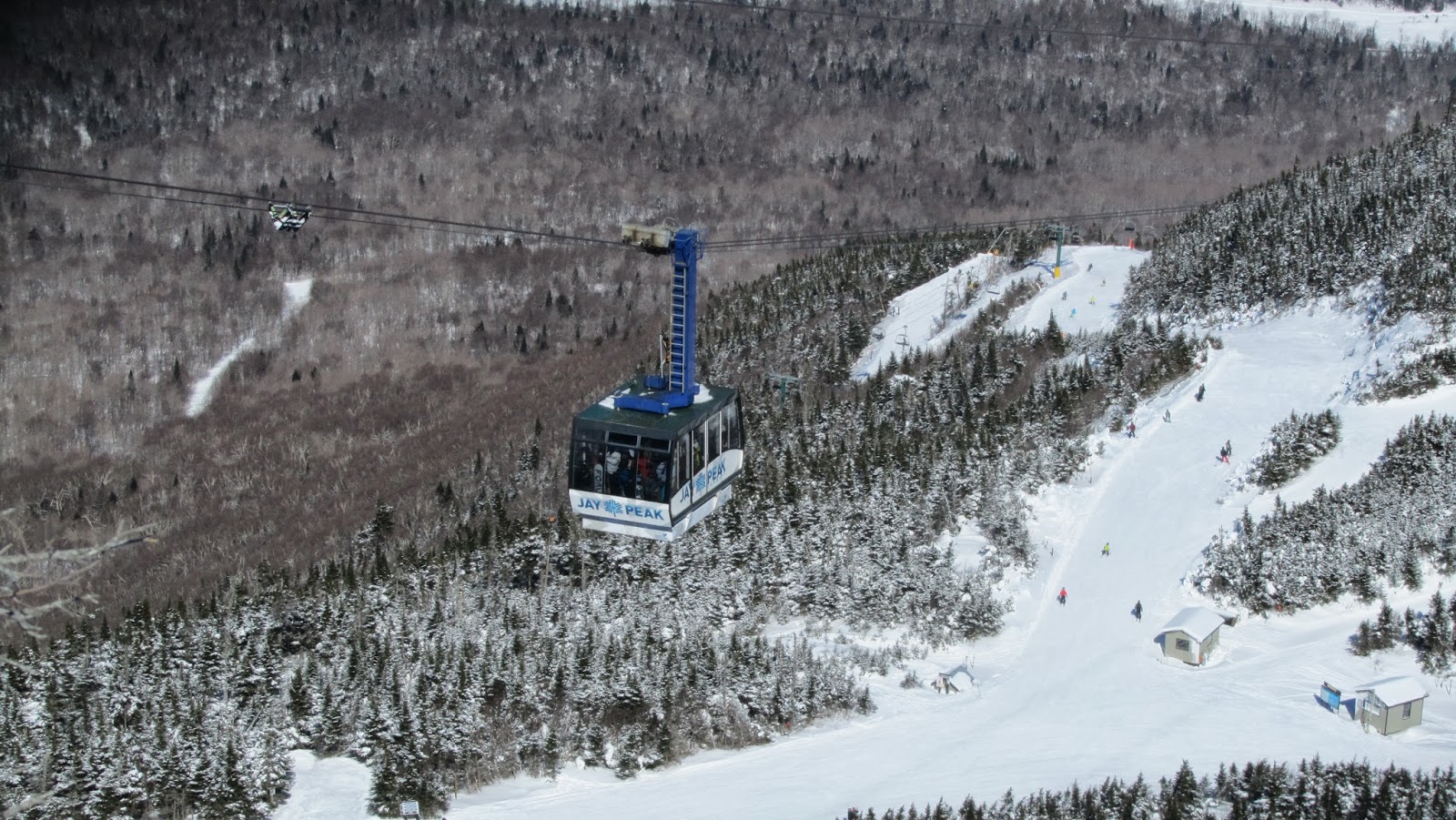 The Tram approaching the summit 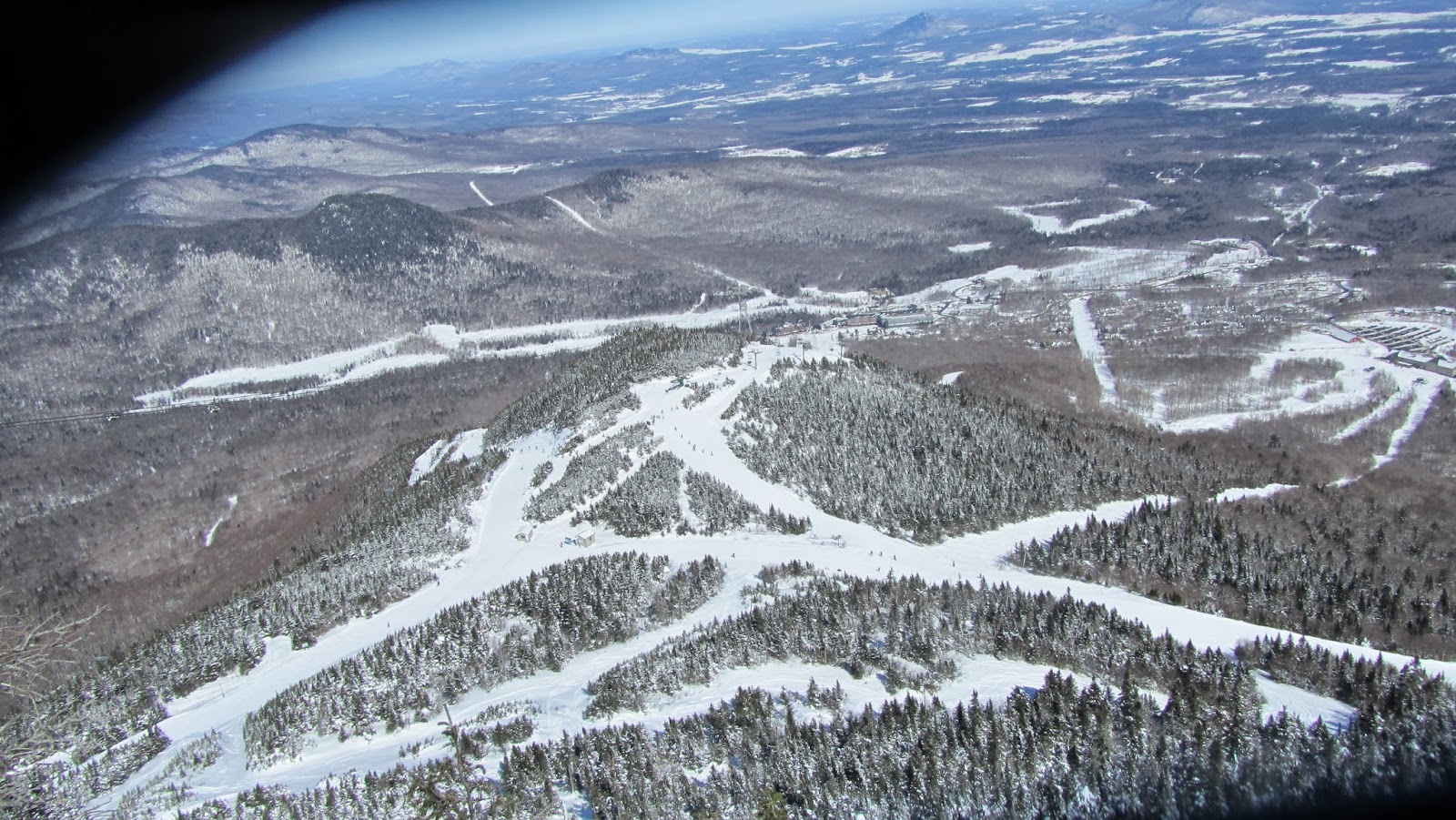 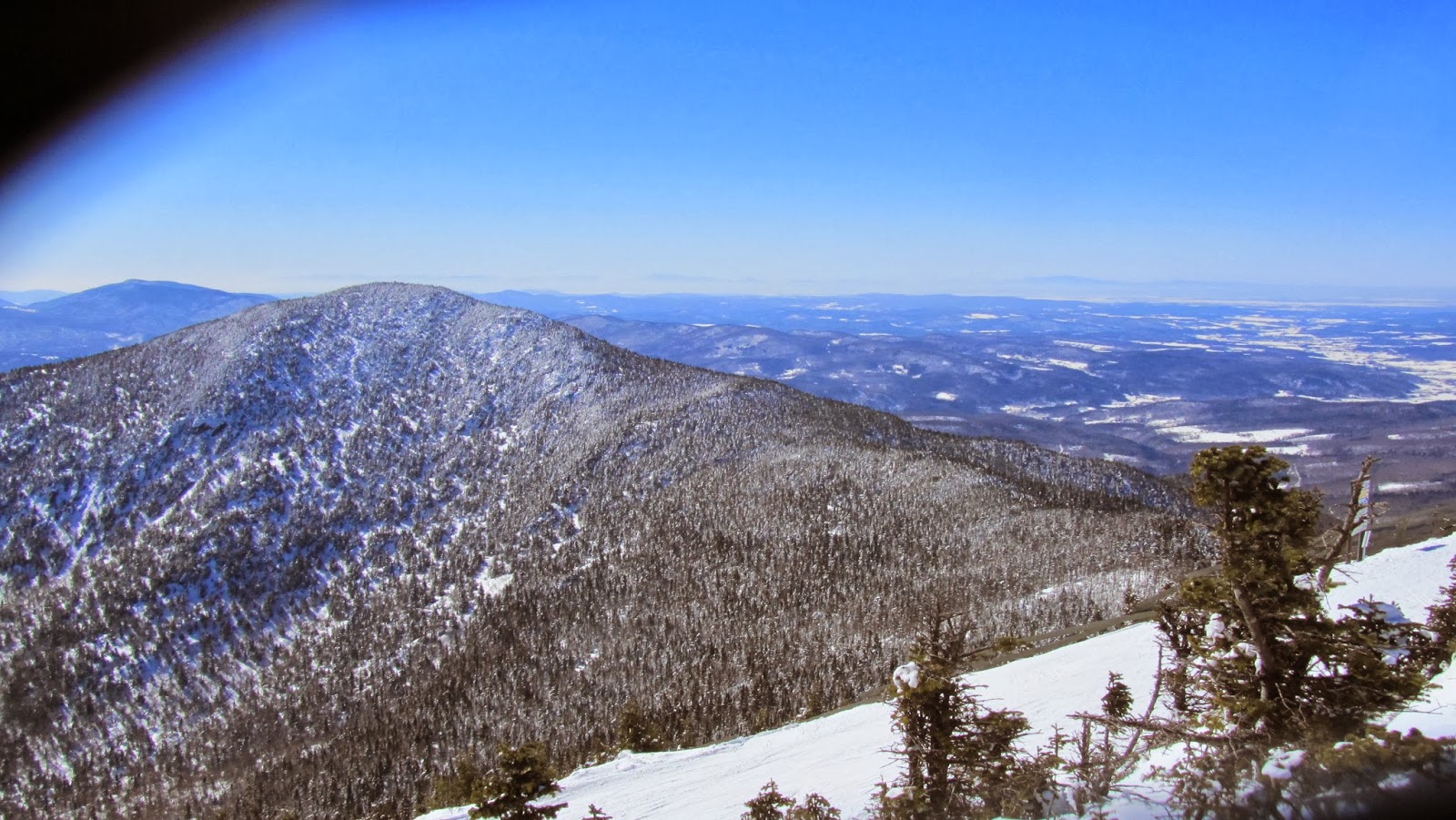 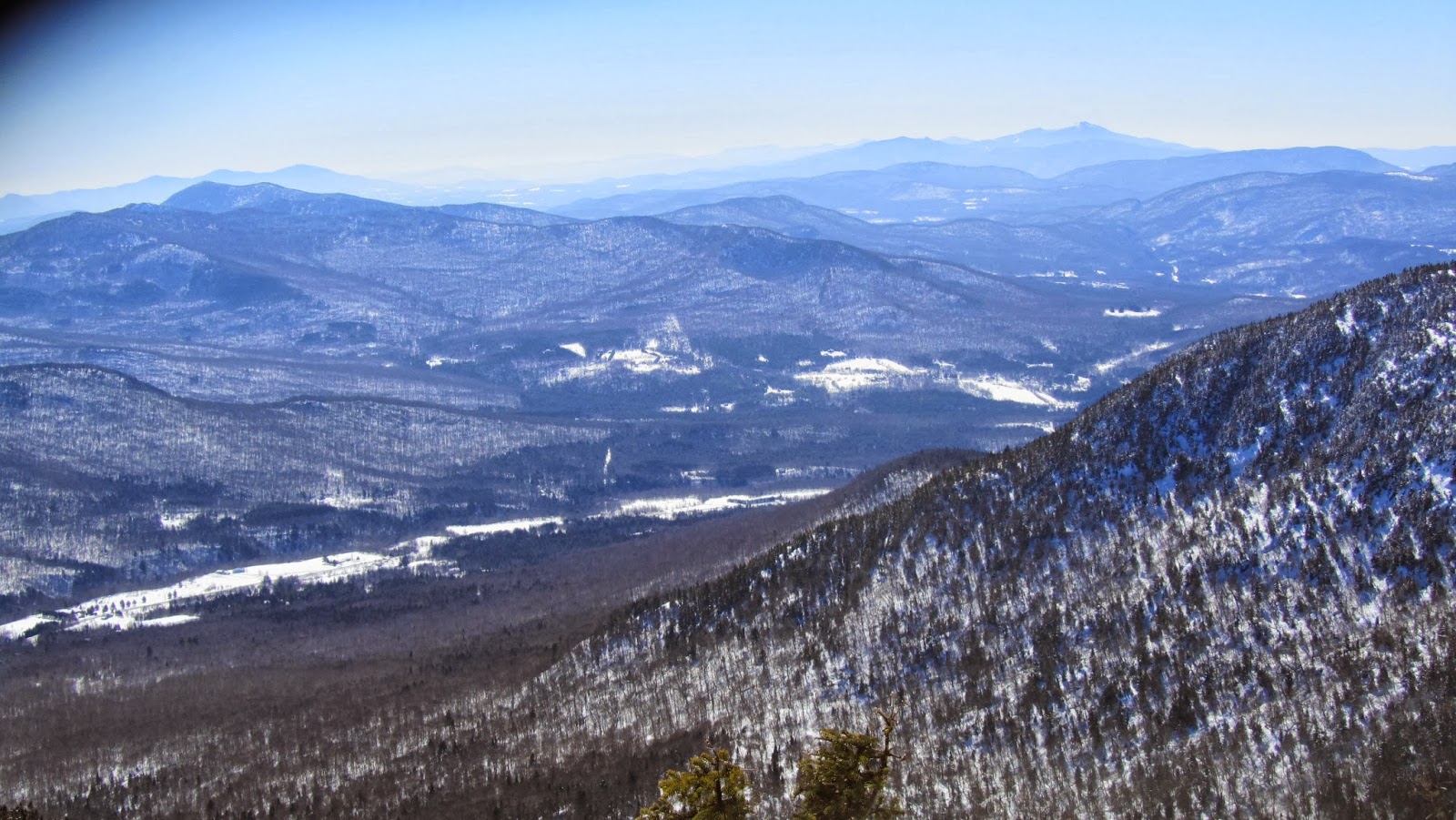 Mt Mansfield in the distance 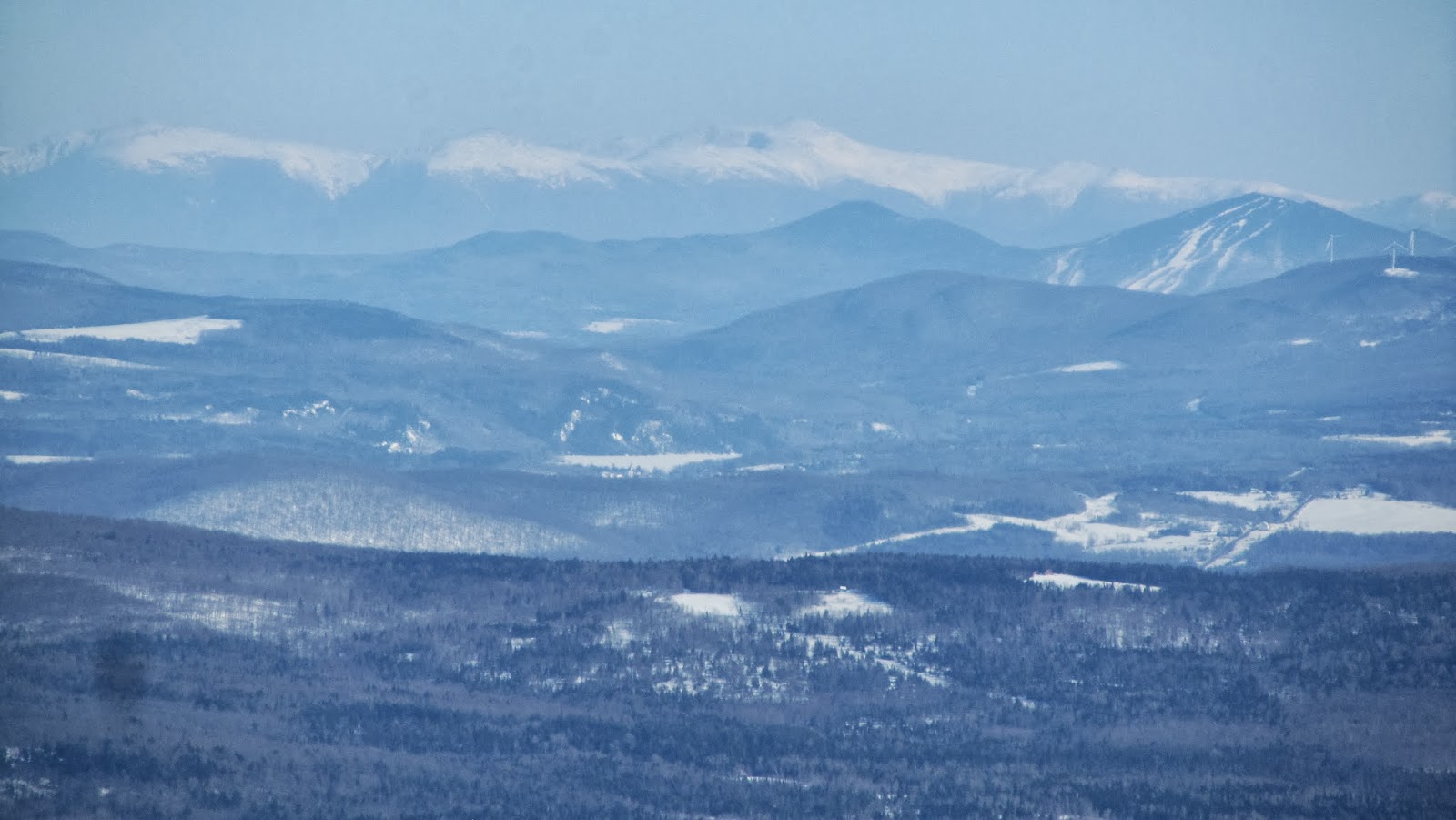 Jay Peak is one of my favorite northern New England ski areas, perhaps second only to Sugarloaf.  There is a lot of terrain variety.  For the advanced skier there are a lot of woods and challenging trails.  The tree skiing is perhaps one of Jay's best features and what it is known for.  It is also the snowiest ski area in the east.  With lift ticket prices sky rocketing, Jay is still one of the least expensive walk-up ticket prices among bigger ski areas in the east.  For bargain hunters, it's still relatively easy to find a discounted ticket at Jay through various outlets.  For Jay Peak's trail map click the link:  Jay Peak Trail Map 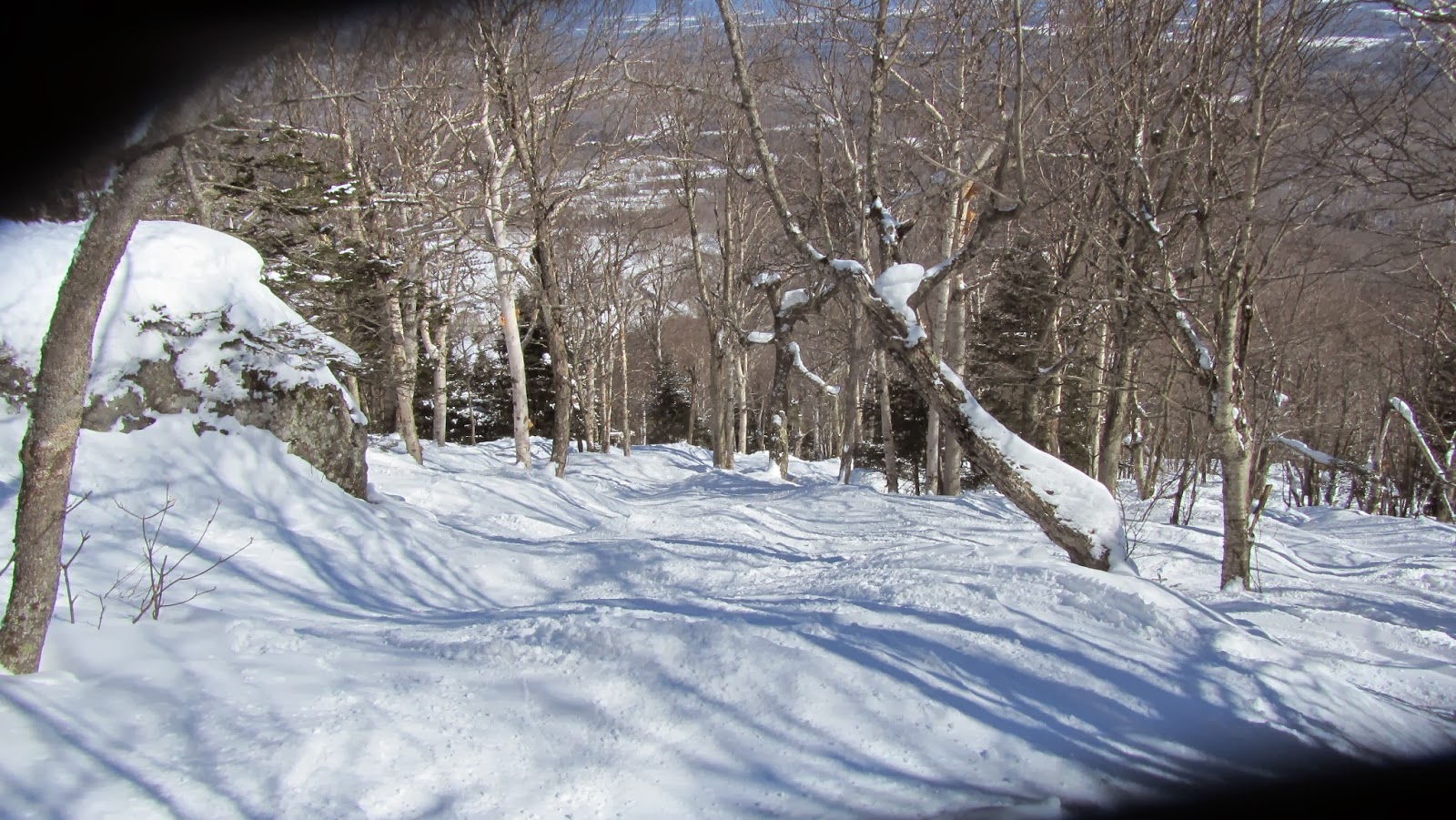 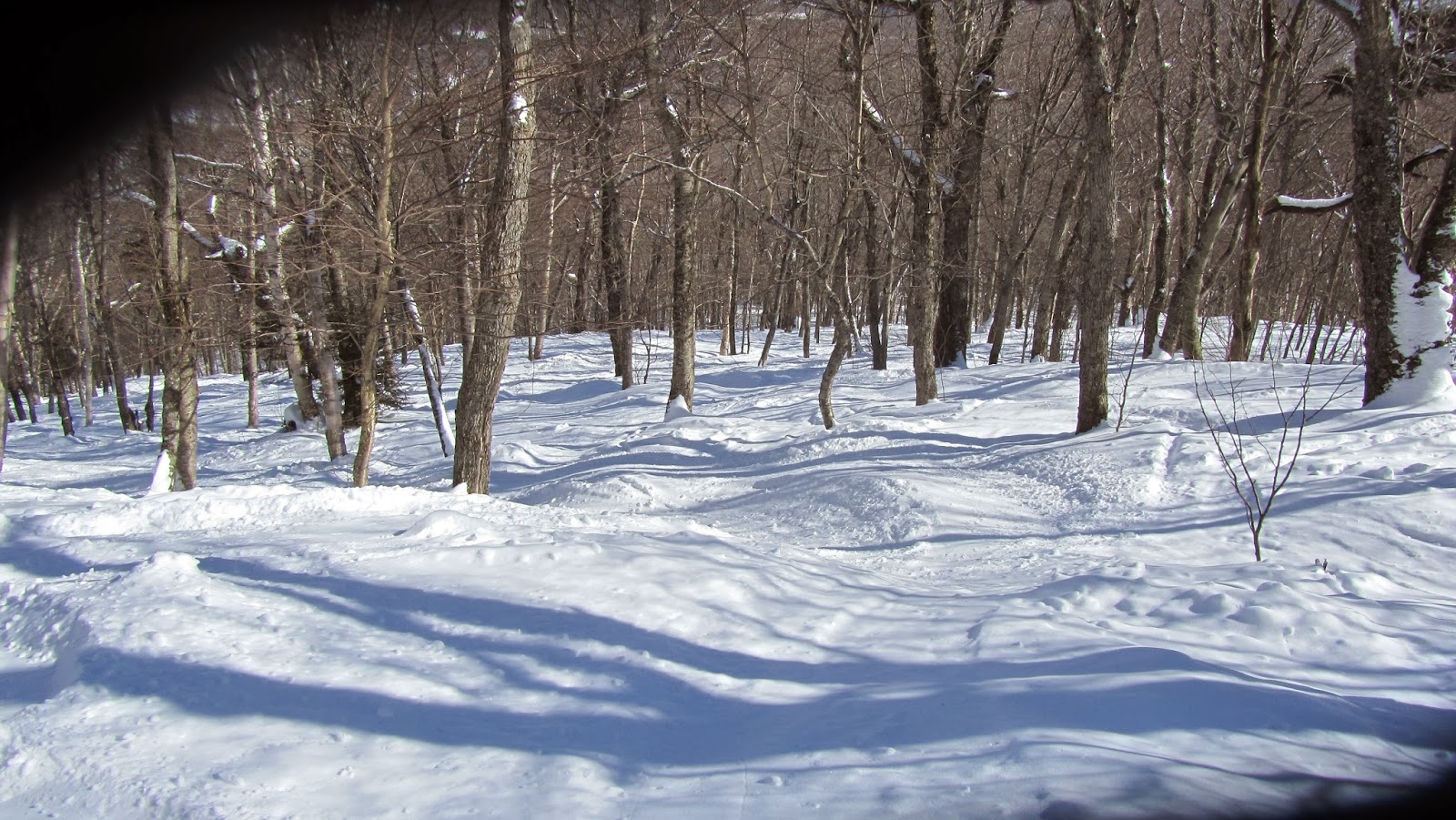 Another view in Timbuktu 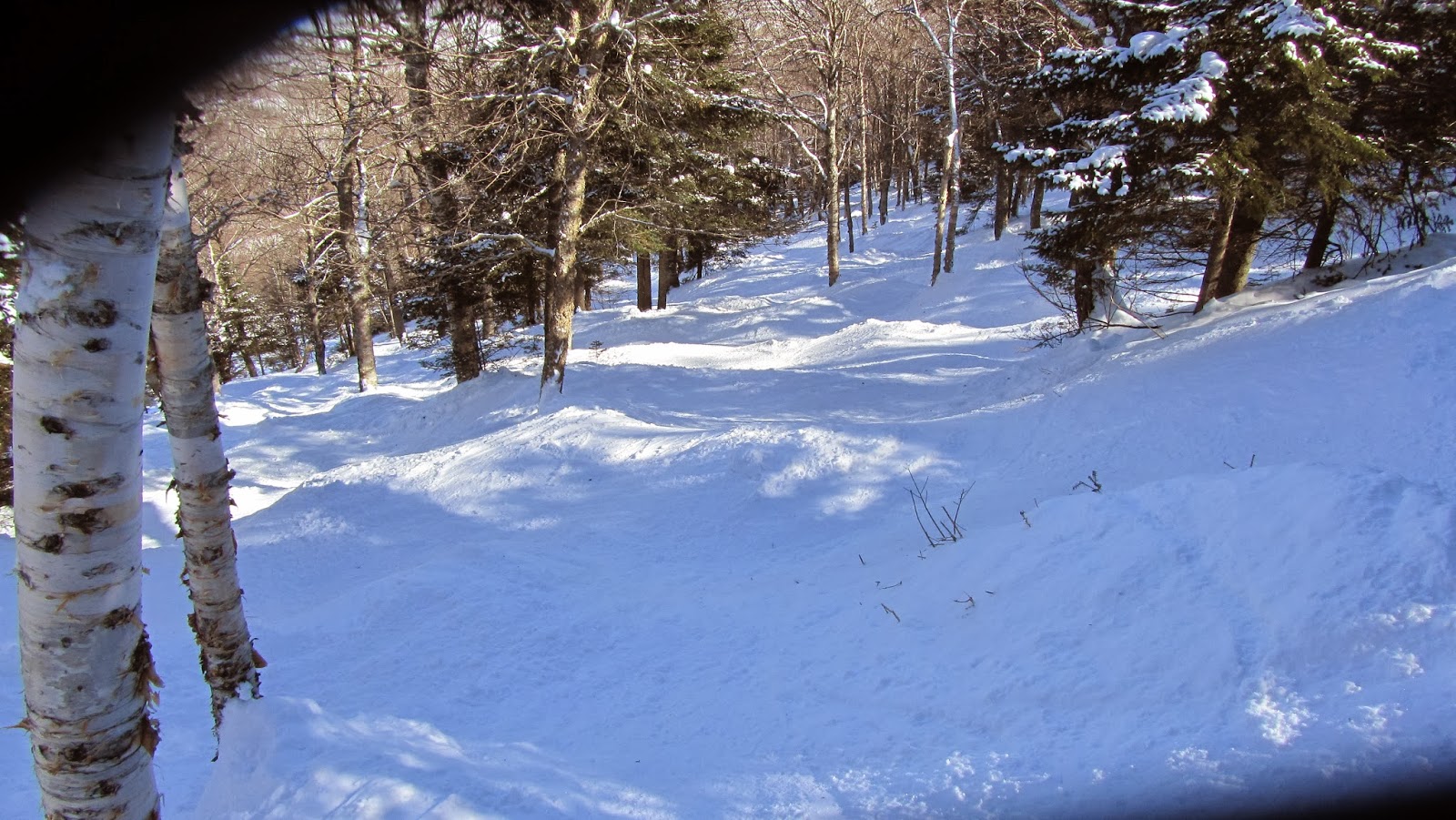 I believe this is Kitz Woods

I spent the evening at the resort before heading back to the Subaru Inn.  The night was downright balmy and my warmest night this season sleeping in my car with the temps only in the single digit negative numbers.  In the morning I left for Owl's Head in southern Quebec.

Owl's Head is a decent sized ski area.  It has nearly 1800 feet of vertical and 50 trails.  I skied here last year and had fun with excellent spring conditions.  This time I wasn't so lucky.  The trails that weren't groomed were very icy.  Because of the ice, skiers stuck to the groomed trails.  This led to some heavy traffic on these trails and caused the groomed trails to get icy.  Being Quebec vacation week, the mountain must have been skied heavily all week and snow showed it.  By the time I left at mid day it was getting quite crowded. 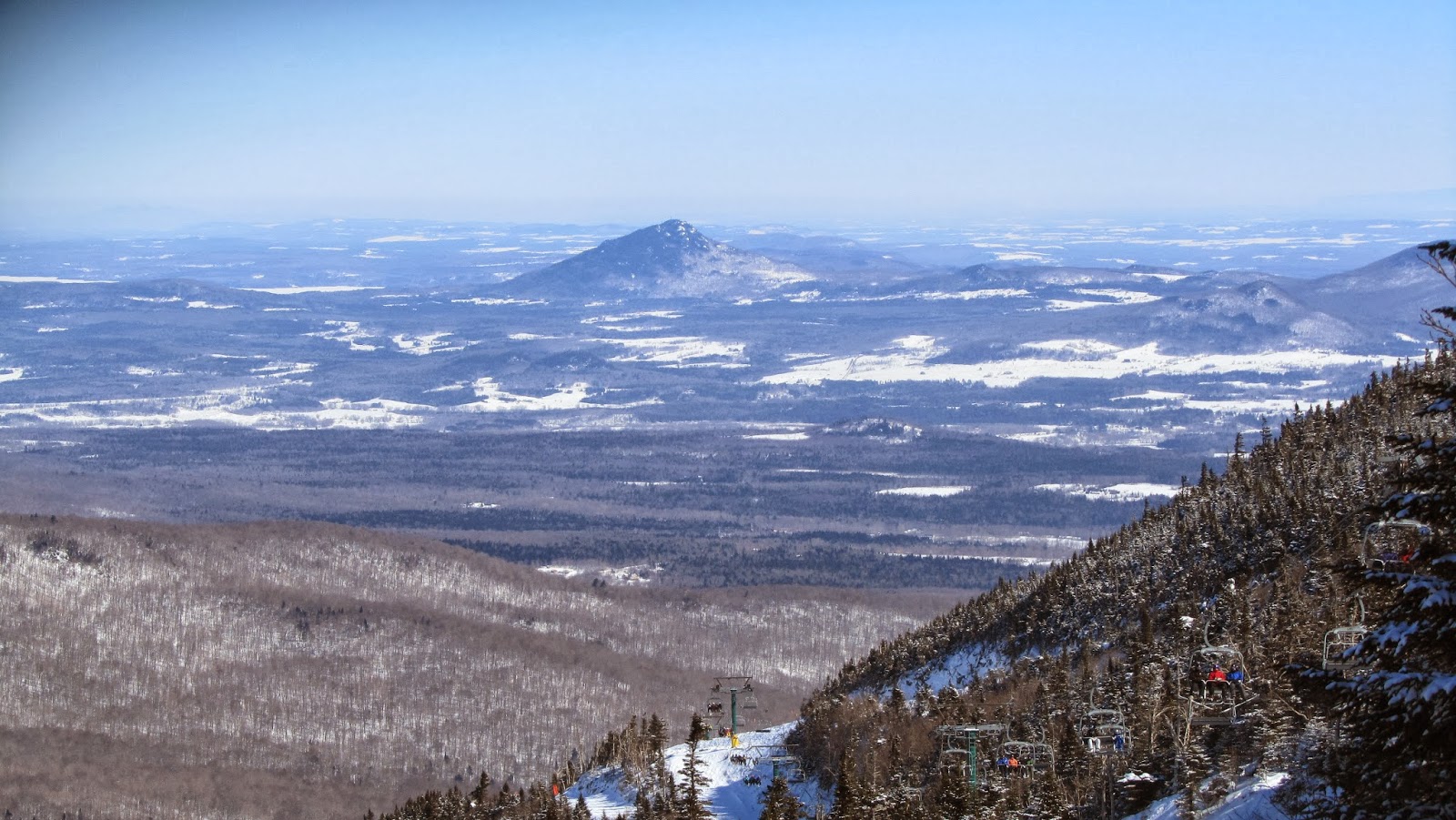 Again I managed to ski all the blue and black trails.  The groomers skied well early but like I said many iced up after a few hours with the crowds.  The woods skied decently but there were more obstacles showing than at the other two mountains I skied.  Most of the ungroomed black diamond trails had large bumps with lots of ice.  Although you could still pick your way through and avoid most ice.  It took a lot to pick the right line without hitting some ice.  The worst trail was probably Colorado, a steep double diamond.  At the steepest pitches, the trail was a sheet of ice.  The only thing that made the trail passable was skiing the bumps on the edge of the trail.  I put in a solid half day of skiing with no breaks.  After my two previous days with good conditions, I didn't have as much fun.

Despite the less than stellar conditions, Owl's Head didn't let down completely.  It was a clear day and the views from the mountain are among the best for eastern ski areas.  Thirty mile long Lake Memphremagog sits at the base of the mountain and makes for some great scenery.  The lake isn't the only nice view.  To the south you can see the snowy summits of the Presidential Range.  From the top of the Peak trail there are excellent views looking at the trails of Jay Peak.  I know from experience, Owl's Head can be a fun mountain and well worth the trip.  This day just didn't have the best conditions at the mountain.  To see the trail map click on the link:  Owl's Head Trail Map 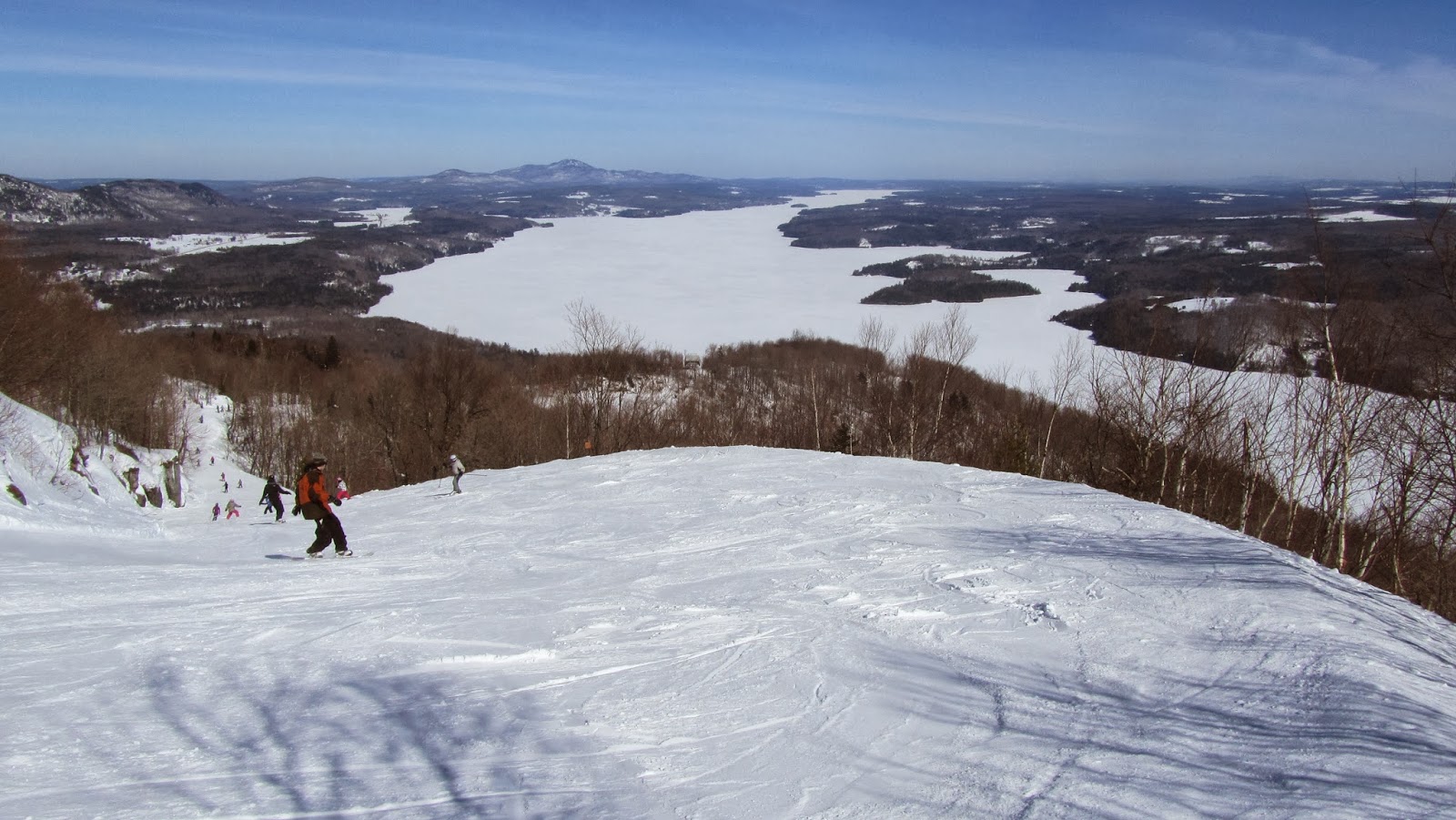 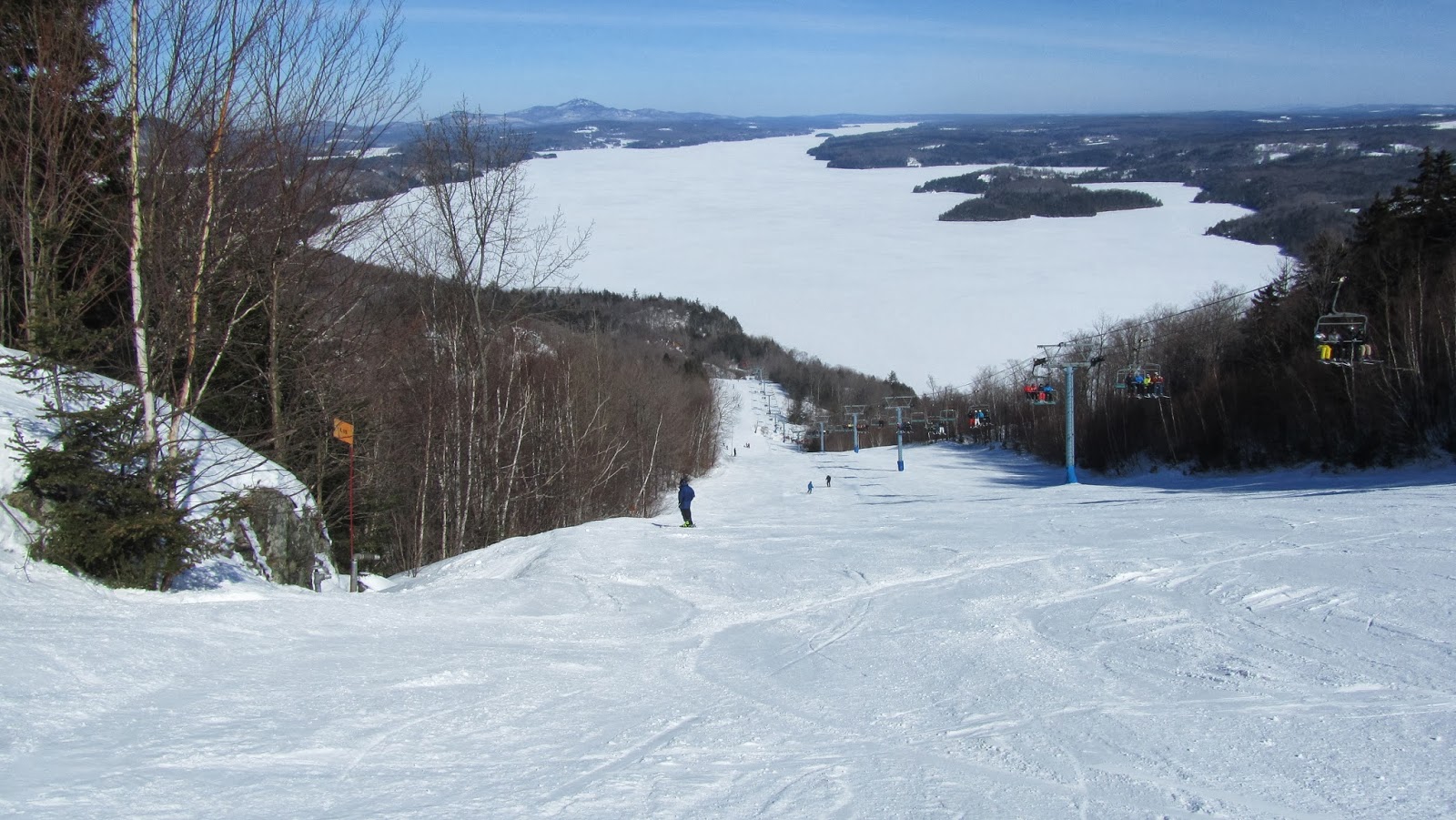 Skiing down to the lake on the Upward Trail 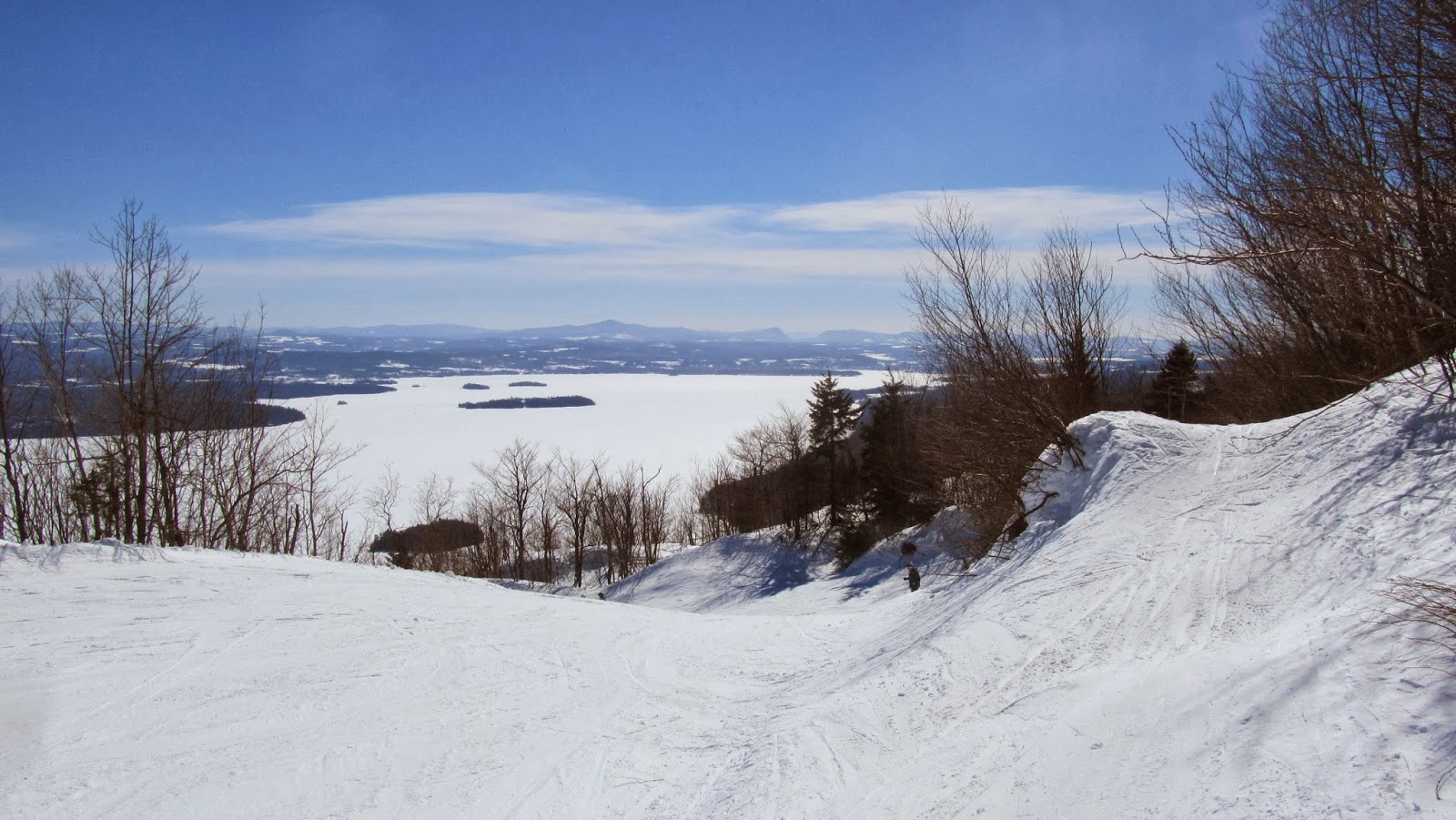 The lake to the south extends into Vermont 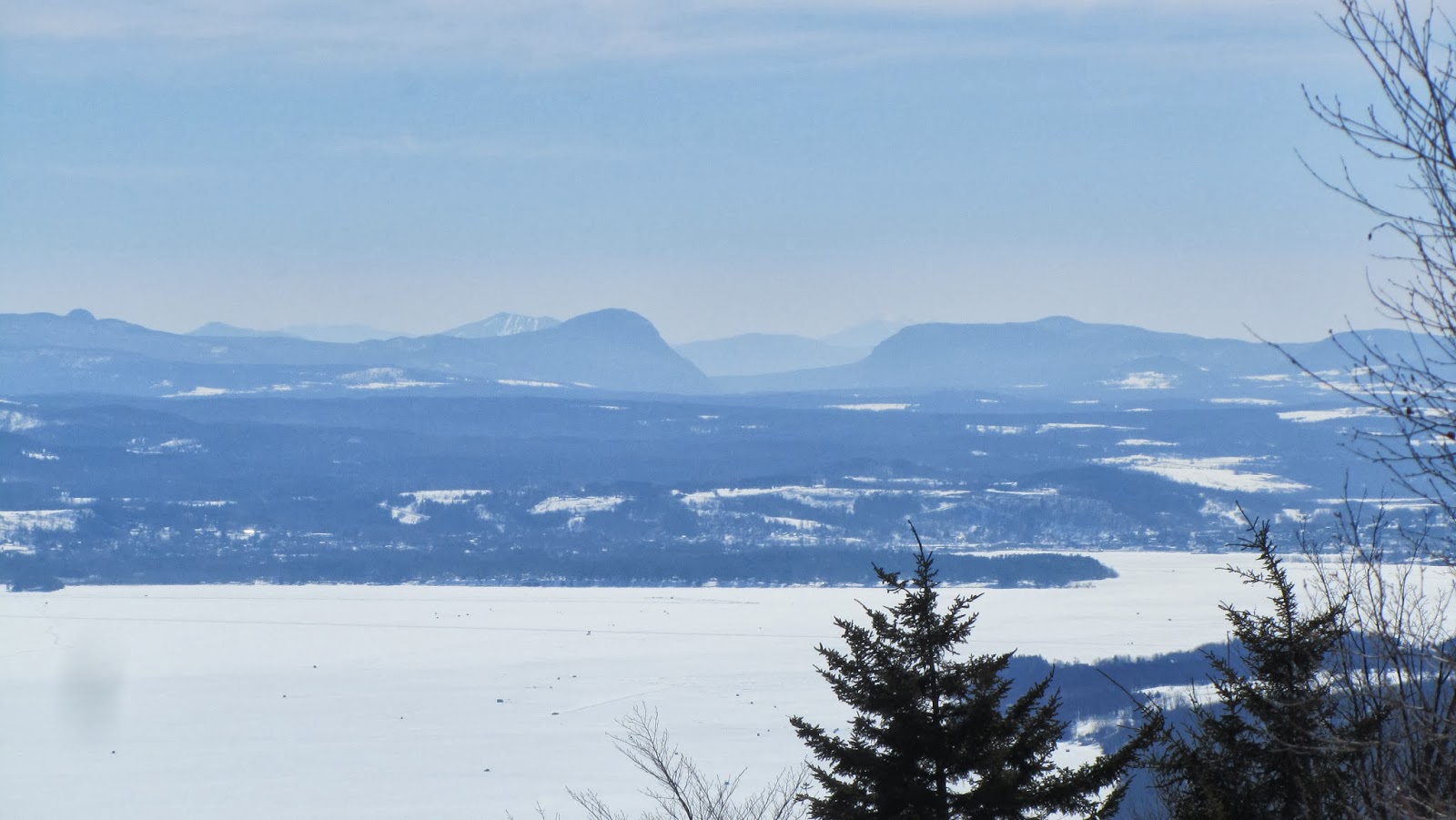 Willoughby Notch in Vermont, Burke Mountain is in the distance just to the left of the pointy peak (Mt Pisgah) in the middle 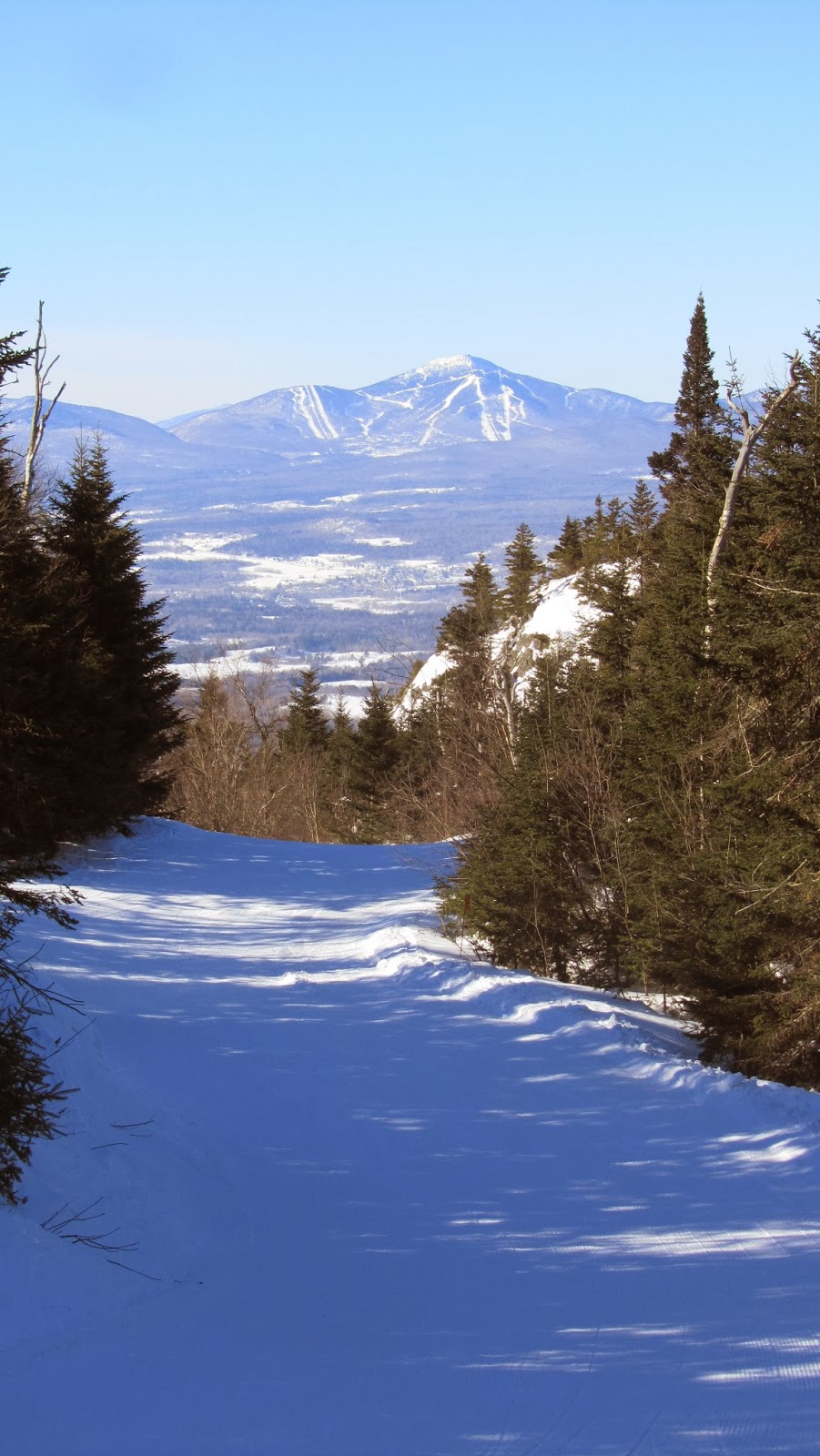 Jay Peak from the Peak trail 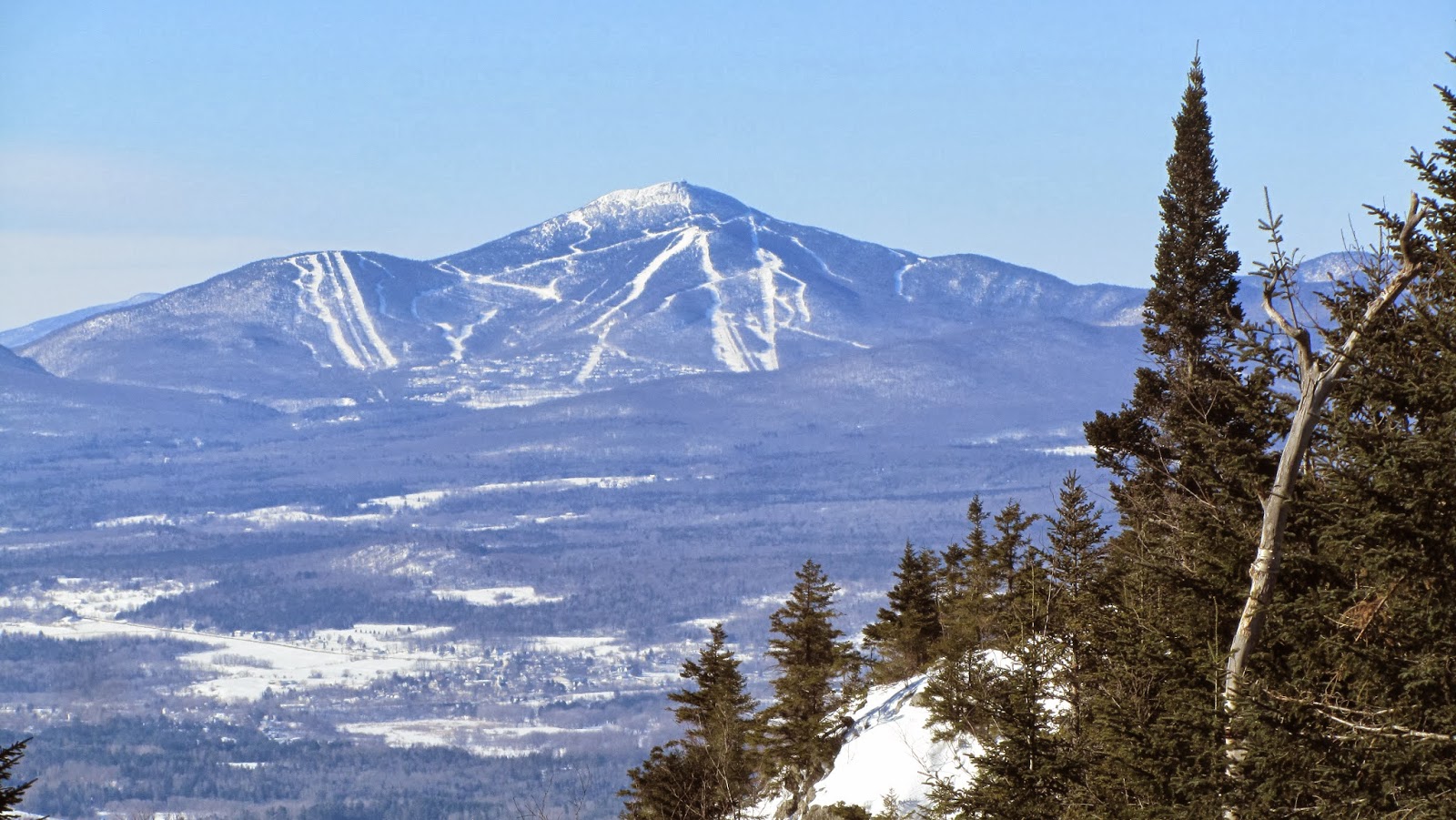 Close up of Jay Peak from Owl's Head

After leaving Owl's Head I returned back home.  Having never traveled in Quebec, I decided to return to Maine via Jackman traveling through the Quebec countryside.  This section of Quebec is very rural once you get past the city of Sherbrooke.  It really does feel like you left North America.  Unlike other parts of Canada that are signed in English and French, this was 100% French.  It was an interesting cultural diversion only a couple hours from home.  Oddly enough at Owl's Head, just a few miles north of the border, some of the staff speaks English among themselves, others French; and many of them went back and forth between the languages.  About five hours after leaving Owl's Head, I was home.