Acadia National Park is one of my favorite spots to hike in Maine with 125 miles of trails traversing nearly twenty mountains and endless ocean views.  They aren't the highest mountains but they are quite rugged.  I usually hike in the park a handful of times every year the scenery never disappoints.
After a major warm up and heavy rain this past week the snow pack took a major hit and the cross country skiing came to an end for now and downhill skiing conditions aren't the best.  It looks more like April than early February.  I thought Acadia would be a good place to hike and J Man agreed.
We decided on a route that covered five of the parks highest peaks.  The trip traversed Bald Peak, Parkman Mtn, Gilmore Mtn, Sargent Mtn, and Penobscot Mtn.  The hiking was treacherous.  A fresh inch or two of snow fell on the park overnight.  The snow itself wasn't an issue but it covered some thick hard ice making it a surprise when you hit the icy stretches of trail.  We both were equipped with traction devices that cover the  bottom of our boots but the fresh snow clogged the cleats and made for some extremely slick conditions.
Despite the iciness, it was a beautiful hike.  Majority of the trails were completely untracked..  We didn't see another person the entire outing.  The trees had a nice coating of new snow.  And as always,  the views were stunning from every summit with mountain seemingly falling into the ocean. 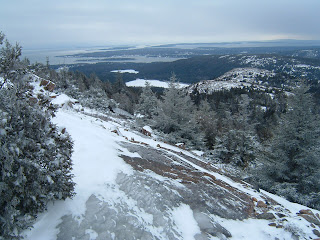 View over Gilmore Mtn and Bald Peak looking towards the ocean.
Notice the thick ice which we faced throughout the hike. 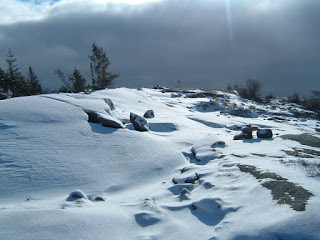 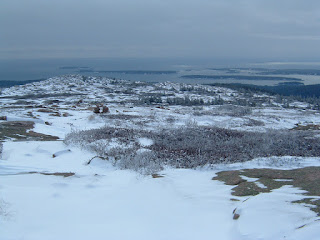 Traversing Sargent Mtn towards the ocean and the Cranberry Isles nearly 1300 vertical feet below. 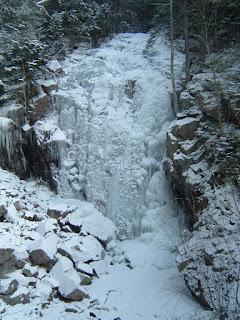