Moosehead Lake is one of Maine's beautiful attractions.  Perhaps the most outstanding feature in the Moosehead Lake region is Mt Kineo.  Kineo rises nearly 800 feet from the middle of the lake with it's sheer cliffs dominating the view of the mountain.  Kineo sits on a narrow peninsula directly across from the town of Rockwood, about a mile from the town.  At approximately 1800 feet it isn't a tall mountain, but its dramatic rise from the lake is quite a sight. 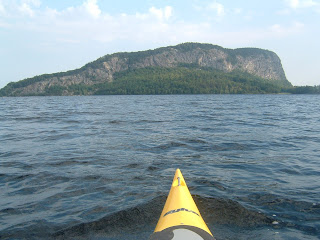 Mt Kineo is justifiably one of the top attractions in the Moosehead area.  The mountain is one of the top landmarks in the region and is visible from many vantage points.  Perhaps the best view of the mountain is from the shore near Rockwood.  Getting to the mountain however takes some planning.  It is reachable by land, but this a difficult undertaking following a network of logging roads that can be confusing and in some instances in rough shape.  The other way to access Kineo is by water.  From Rockwood, would-be hikers can hire a ferry to travel across the lake to the base of the mountain.  Others choose to use their own boat. 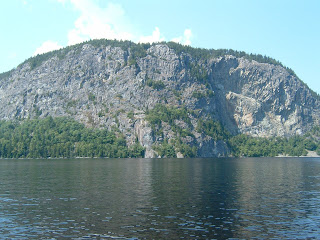 Believe or not, this rises nearly 800 feet above the water

I hiked Kineo on one other occasion.  Last summer I paddled my kayak across the lake to the base of the mountain and hiked to the summit.  The sky was quite hazy that day and views were somewhat limited.  I wanted to return on a clearer day.  This time Puma came along since Moosehead Lake is one of her favorite places.  The weather Wednesday morning seemed promising so we made the trip to Rockwood.

We brought our kayaks along and headed to the base of the mountain.  Moosehead Lake is a very large lake.  It runs nearly 40 miles long and a dozen or so miles wide at its widest.  Between Rockwood and Kineo the lake is at its narrowest, about a mile wide.  Because the lake is large it is subject to some windy and rough conditions.  The northern part of the lake is vast and north winds tend to funnel through the narrows at Rockwood making rough conditions.  On this morning the winds were blowing a strong and steady wind and making our paddle a challenge.

The paddle across the lake, even though only a mile, gave us a good beating.  Although rough, it wasn't the roughest conditions we paddled on Moosehead Lake.  However the waves and wind direction put us at a strong disadvantage.  Waves high enough to reach the cockpit were normal and our necessary direction of travel put the waves almost directly perpendicular to us.  It seemed like a long mile paddling full bore just to keep the kayaks going the right direction.  We made it across and stashed our boats and headed off for the summit. 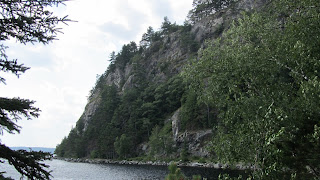 The trail starts by following  the top of cliff

There are three trails to the summit of Kineo.  The range from roughly a mile and a half to four miles.  Puma and I climbed via the Indian Trail.  This is the most direct route with the best views.  It follows the top of Kineo's cliffs for part of the way with lots of views over Moosehead Lake.  Although shorter, it also the most strenuous of the trails rising nearly 800 feet in less than a mile with many sections of steep rock to navigate.  From the point we stashed our kayaks, I figured the hike to summit was somewhere just under 1.5 miles. 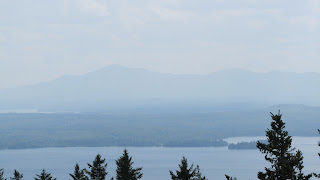 A very hazy view toward Big Moose enroute to Kineo 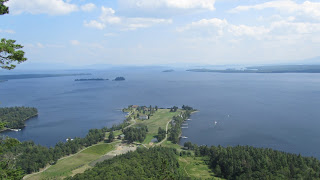 Overlooking the golf course and looking south on Moosehead Lake


This hike, although short took its toll on Puma.  She hiked many higher mountains and longer distances but this one wore her down.  The hike itself probably would not have been so bad had it not been for the exhausting paddle.  We made it to summit albeit a little slow. 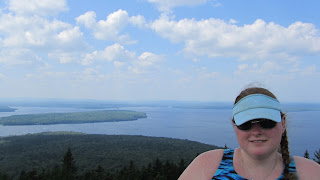 A tired Puma on the fire tower

Kineo's views are far reaching.  On the summit a fire tower rises above the trees offering 360 degree views. The clear morning sky unfortunately became quite hazy by the time we reached the summit in the afternoon. The views unfortunately greatly diminished.  We still had 360 degree views, just not as far reaching as I hoped.  We still had nice views.  Little Kineo and the Spencers dominate the view to the east.  Rockwood, the Moose River, and Brassua Lake are close to the west.  The Lily Bay Range and Big Moose Range line either side of the lake looking south.  The northern reaches of the lake are easily seen to the north.  I'm sure on a clearer day Katahdin would be easily visible but with the haze we were out of luck. 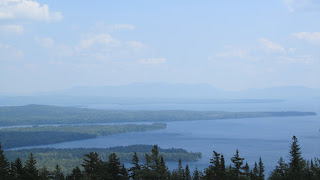 Looking toward the Lily Bay Range 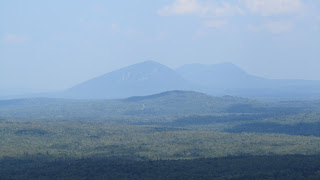 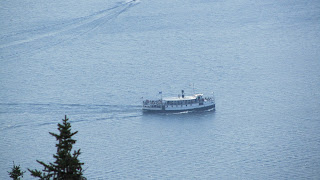 After climbing the tower and taking in the views we returned down the mountain.  The descent went quite a bit quicker for Puma than the climb.  The paddle back however, was another story.  The wind picked up and made for even choppier paddling on the return to Rockwood.  By the time we finally reached the shore, an already weary Puma was exhausted and seemingly dehydrated.  During the paddle, the conditions were rough enough that we couldn't stop to drink while fighting to stay on track and stable.  My body can take the abuse but Puma is more of a casual adventurer and the combination of the hike on top of the challenging paddle pushed her to her limit.  Besides the paddling and hiking, we were also lucky enough to see a young bear cross the road near Rockwood on the drive.  Because of the rough water, I couldn't take any pictures while paddling so the pictures from the water in this blog are from last year's trip to Kineo. 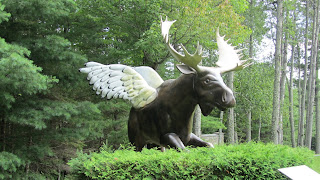 Winged Moose statue outside of Rockwood, ME