Last weekend's ride of the Triple Rainbow Route was my first serious mountain bike ride since I moved to Colorado.  It was such a nice ride that I was eager get back on the trails with my bike.  I browsed through my local bike guide and found a ride called the Silver Creek Loop just south of Poncha Springs.  Like the Triple Rainbow, a good part of this ride featured the Rainbow Trail.  I enjoyed the Rainbow Trail's singletrack on the last ride, so this route seemed like a good option.

The ride started just below the summit Poncha Pass along US 285, just a couple tenths of a mile from County Road 200.  Starting with CR 200 and eventually FS 201, the next 8 miles would follow dirt roads.  The first 4.5 miles were well maintained and graded dirt before the road narrowed and became somewhat rougher.  From the start the route climbed for 8 miles.  The climbing was very gradual however and an easy spin in the middle chainring most of the way.  The roads followed Silver Creek the entire way often along meadows.  Even though most of the route was wooded, there were several spots where I could enjoy views of the surrounding peaks with Antora Peak being the most prominent mountain in view.  After spinning 8 miles, I reached the Silver Creek trailhead and the Rainbow Trail. 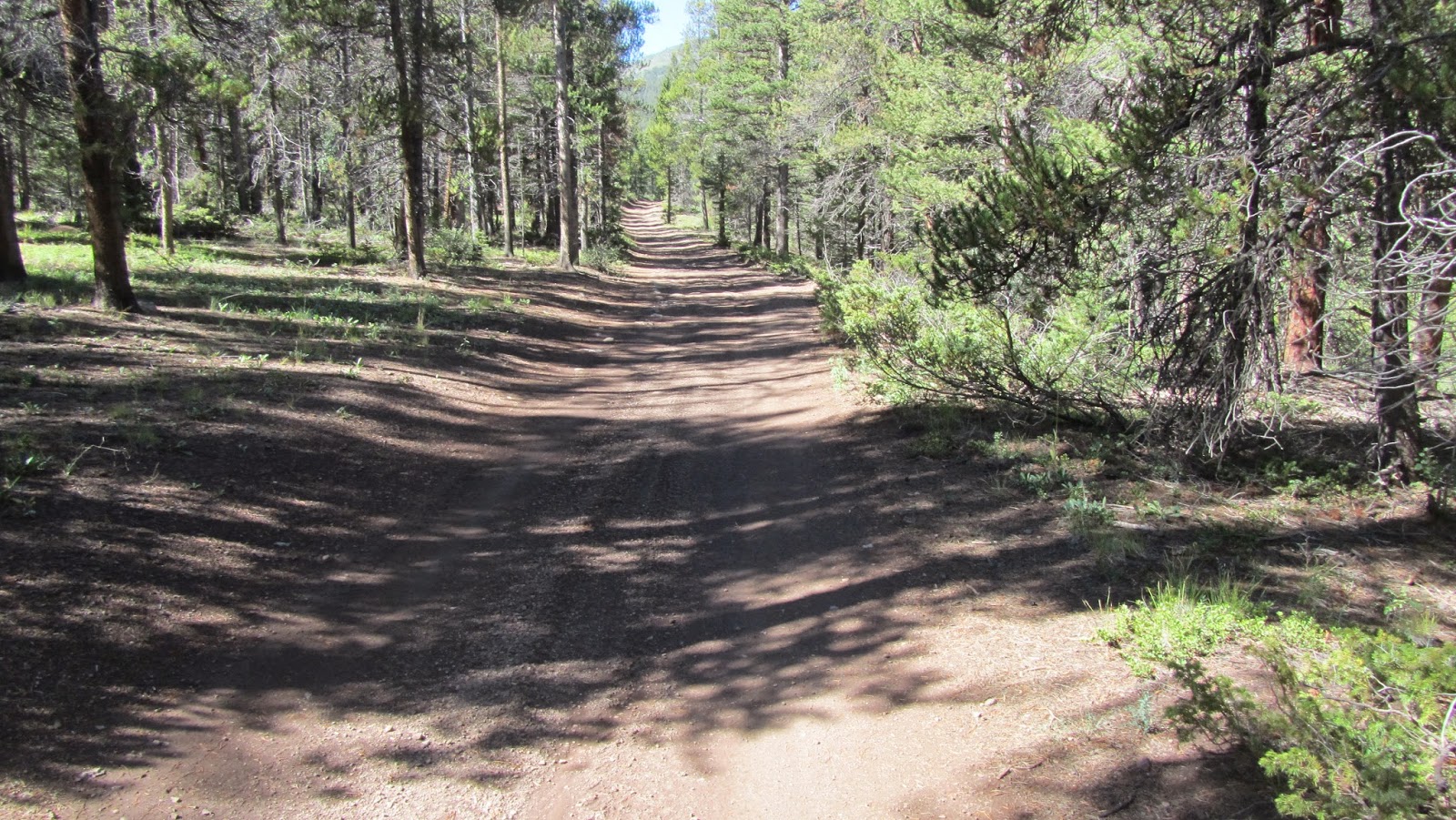 Riding along FS 201 in the woods 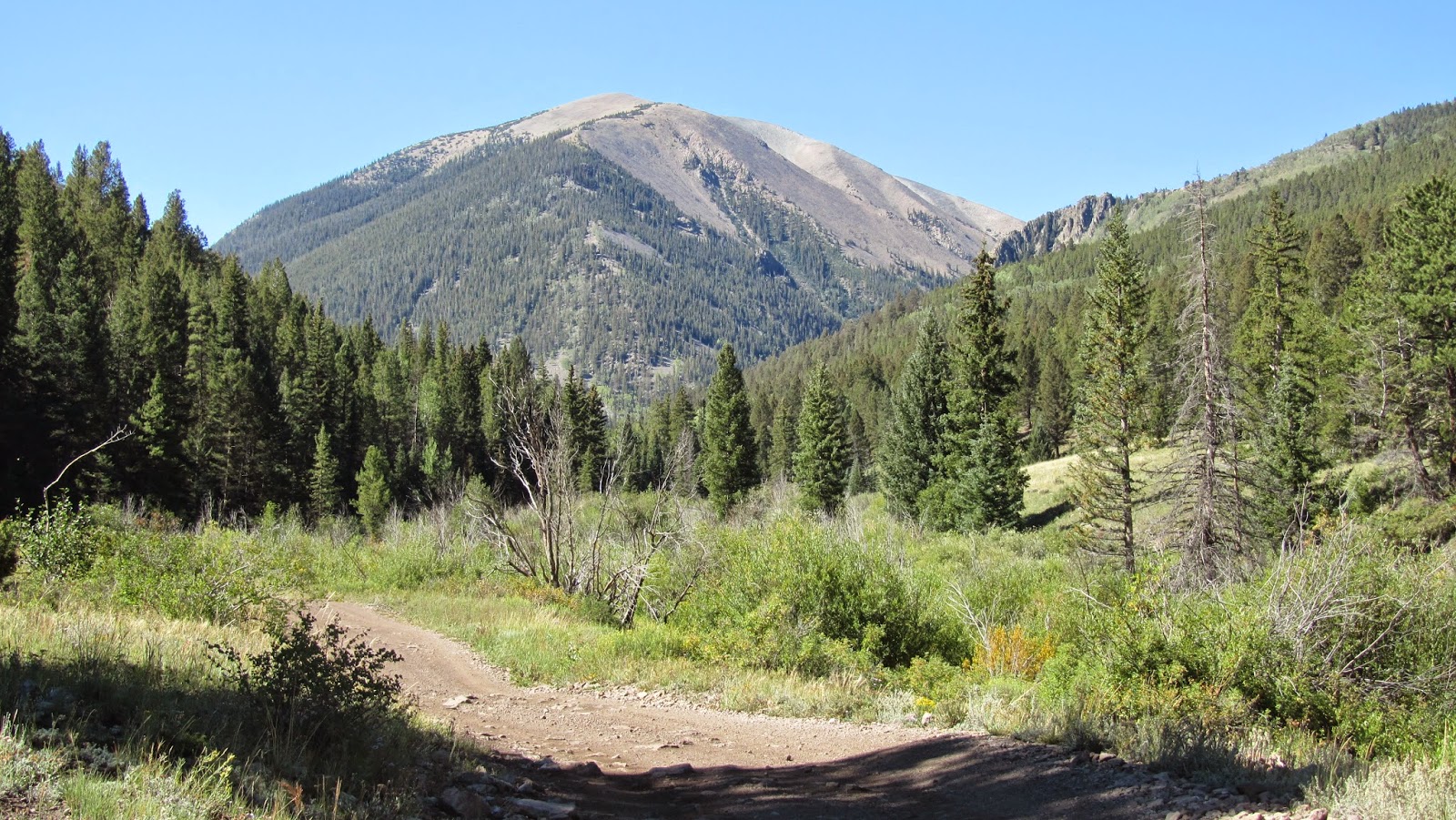 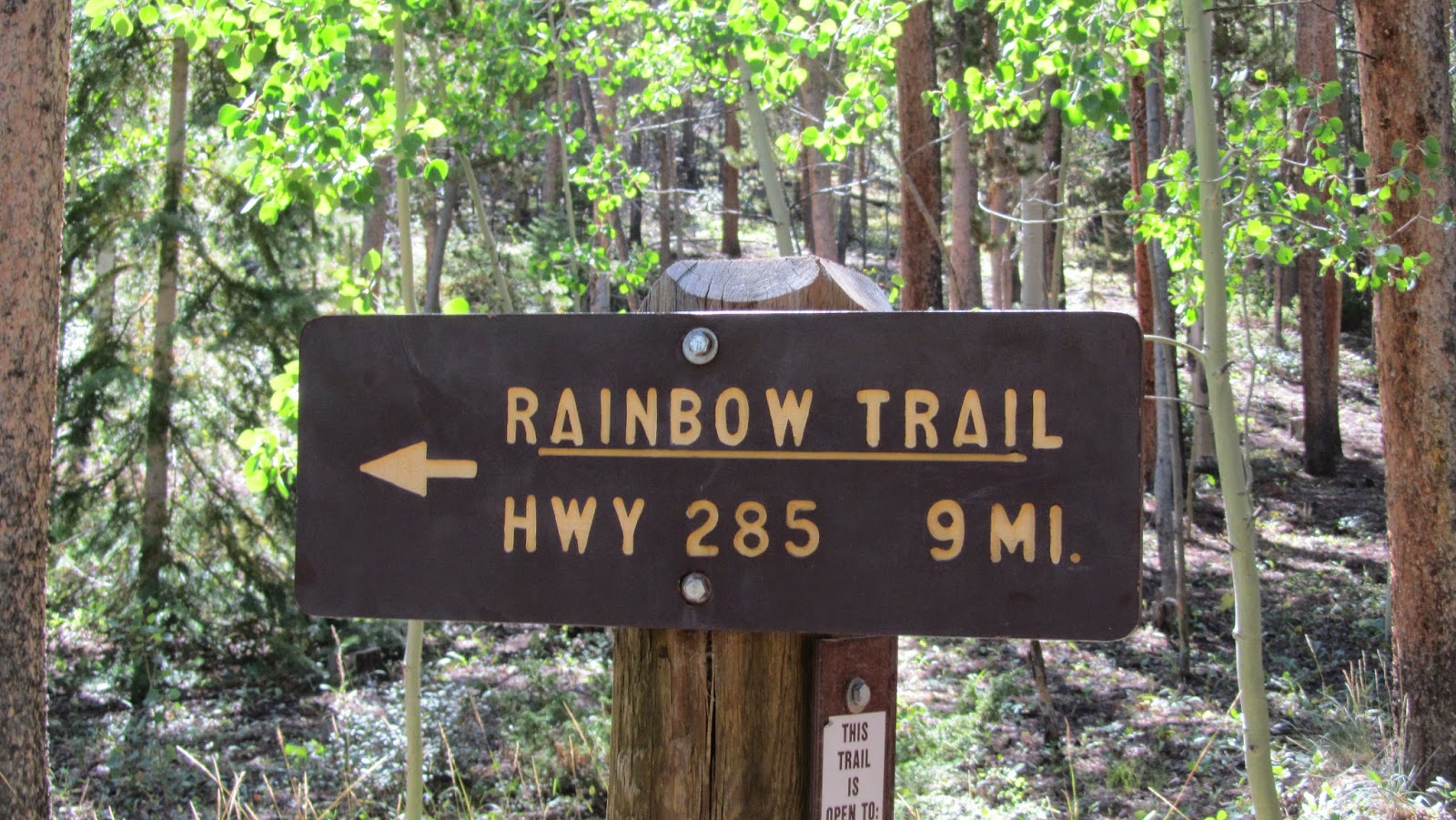 Start of the Rainbow Trail Section 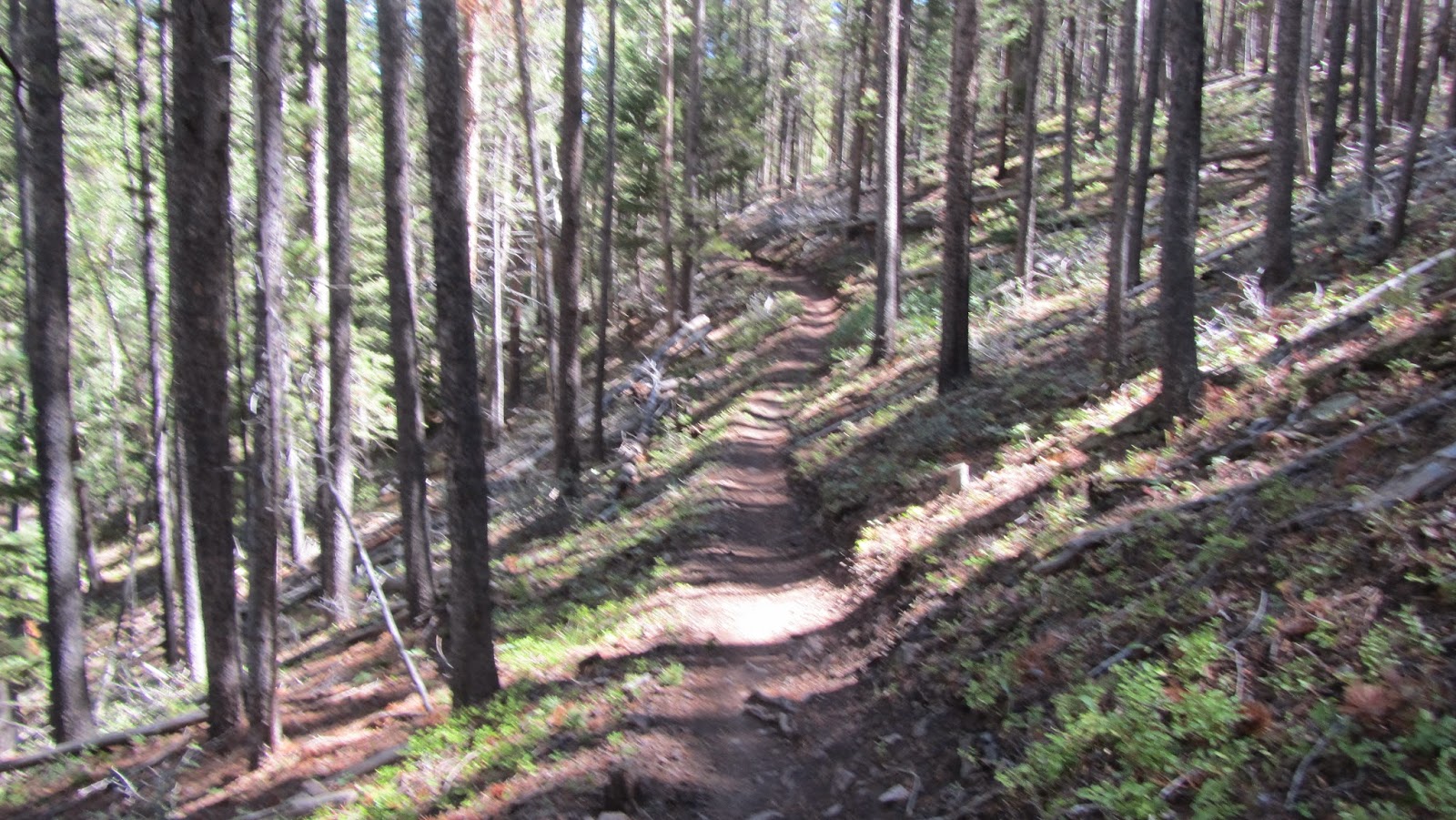 Riding the Rainbow through the woods 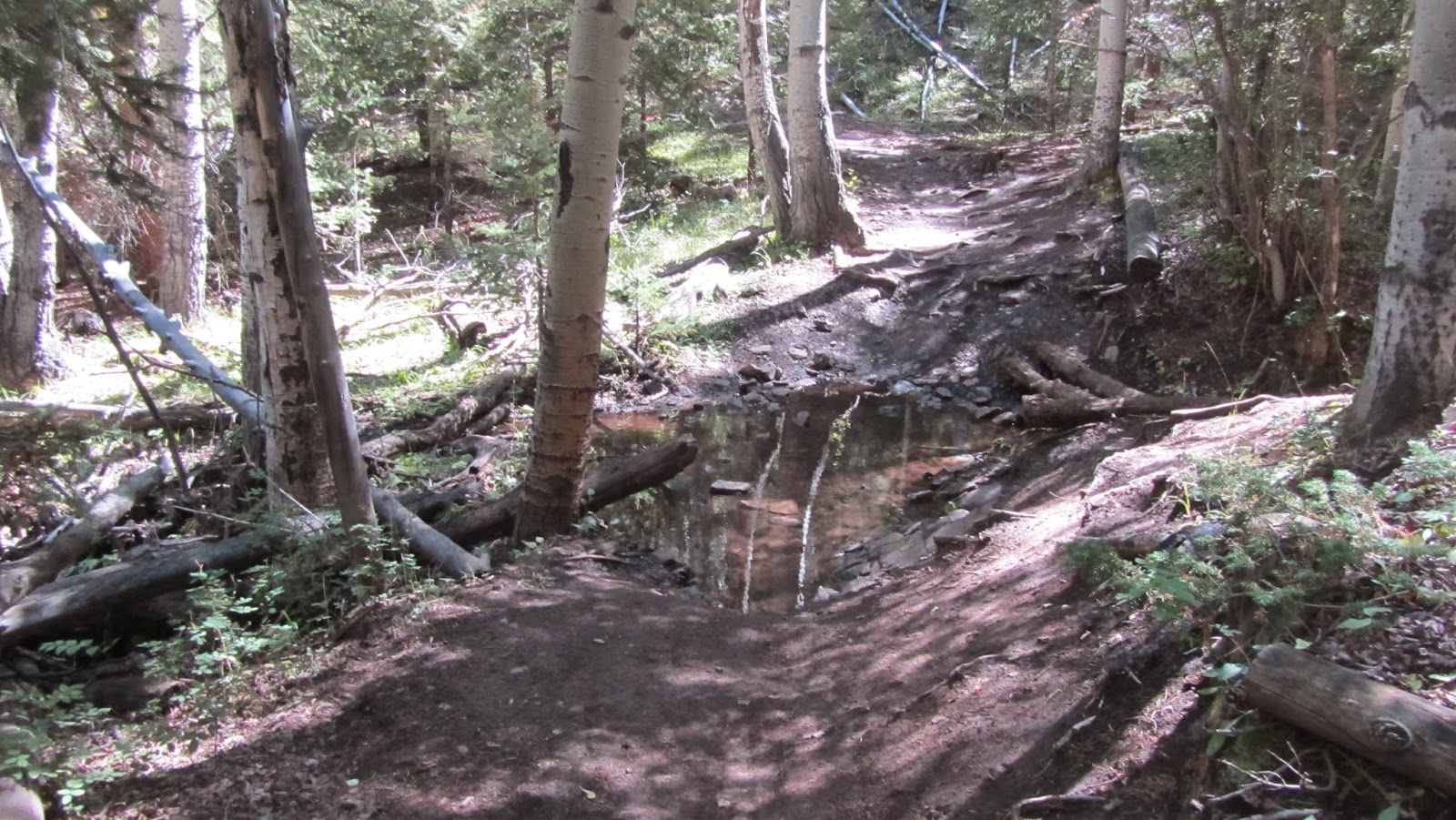 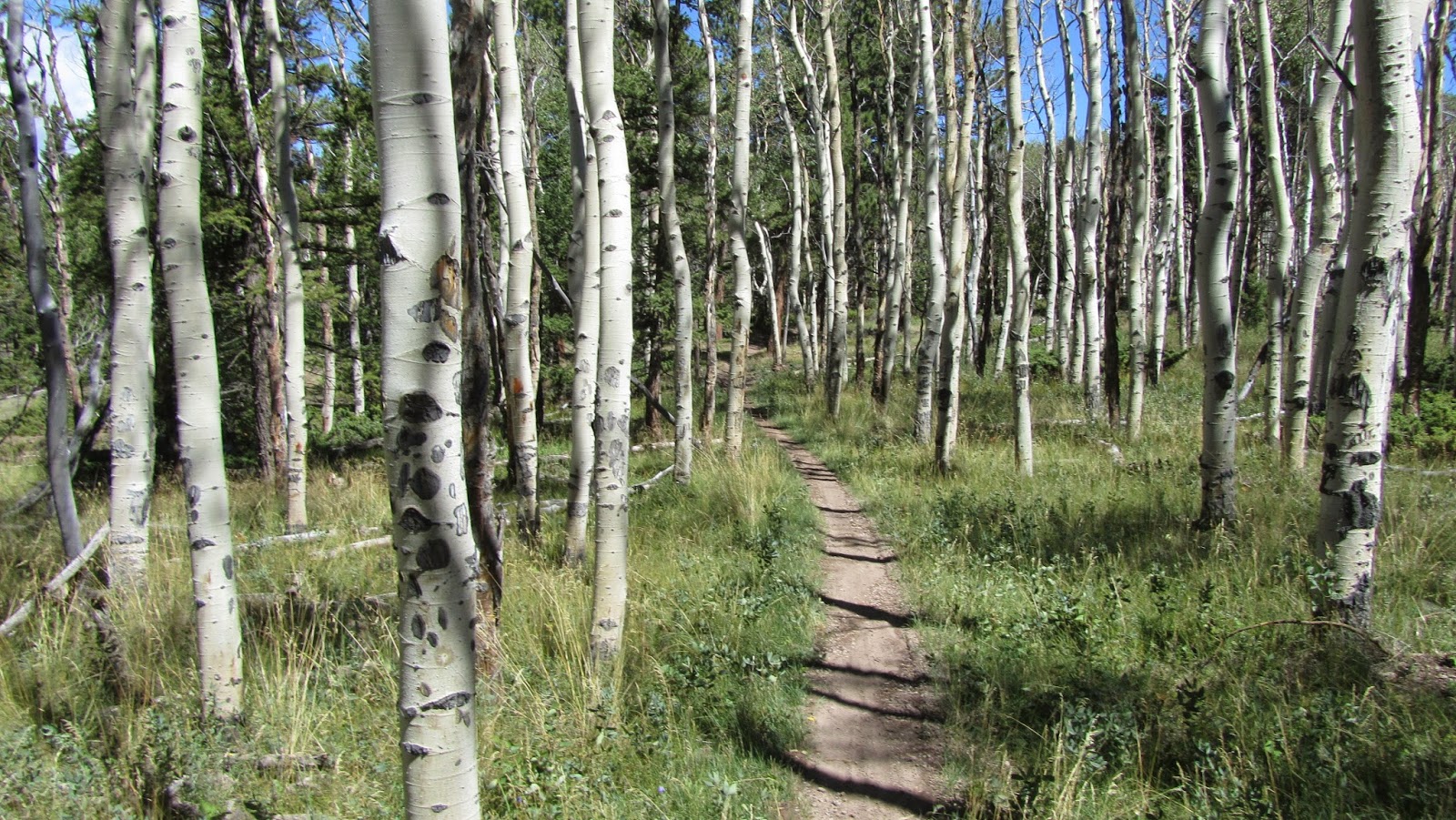 Looking back at a
meadow I just rode through 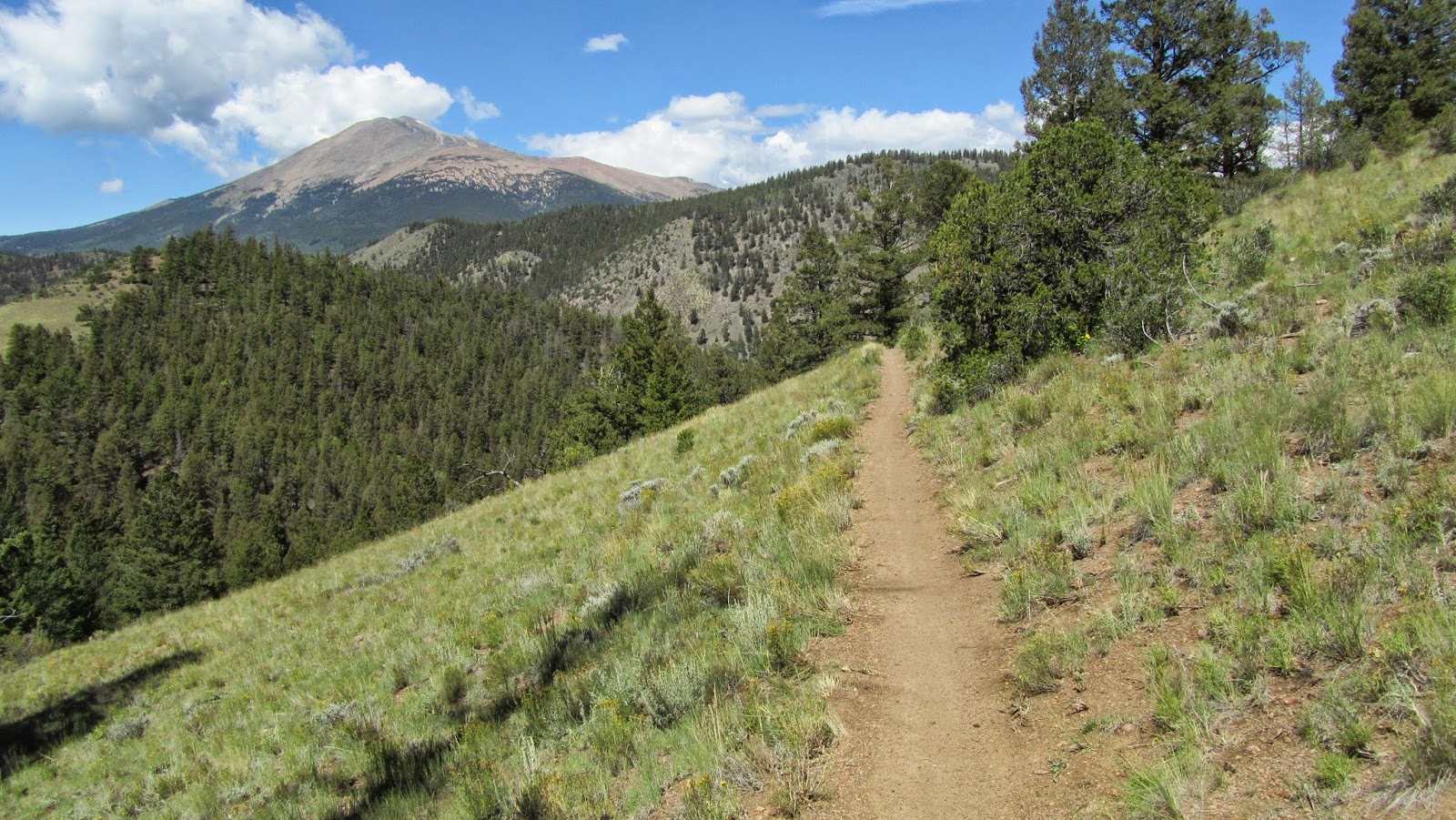 Entering a meadow with views
toward Mt Ouray

The final descent to the trailhead was the most technical part of the ride.  The trail was quite steep and fairly narrow with a steep drop along the trail.  The route was rocky enough to keep me on my toes.  Several sharp switchbacks prevented me from letting my speed get to crazy.

Not only was the riding a blast, the scenery was also enjoyable.  As the trail popped out of the woods into meadows, the views opened.  The view of Mt. Ouray was the most impressive.  At one point the trail entered an open area with a nice look at the Sangre de Cristos.  Toward the end of the ride, the meadows opened up to views toward 14er Mt Shavano and its neighbors.  The Rainbow Trail paralleled the dirt roads at the start of the loop but traveled higher.  At spots, I could look down and see the early part of my ride. 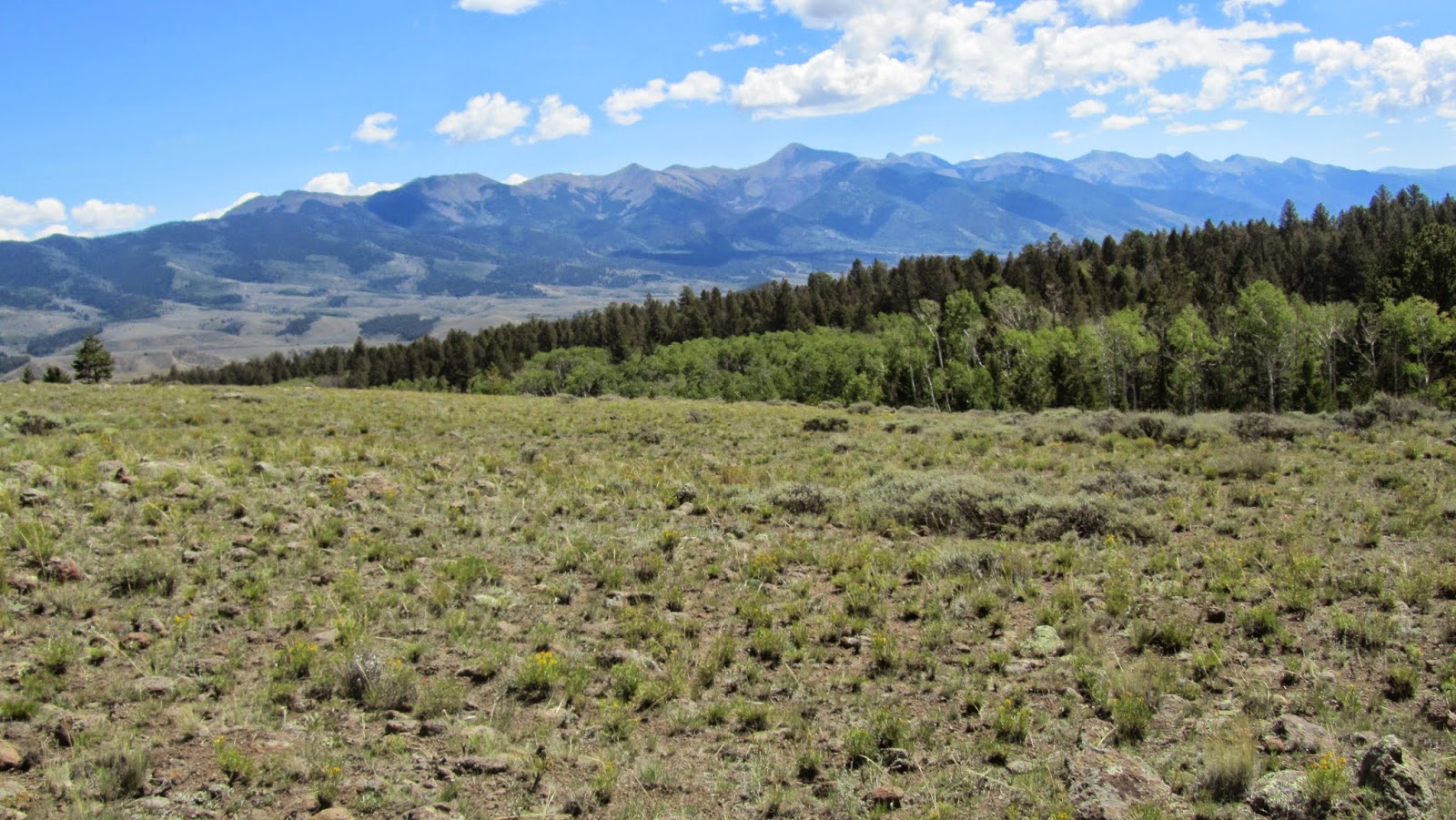 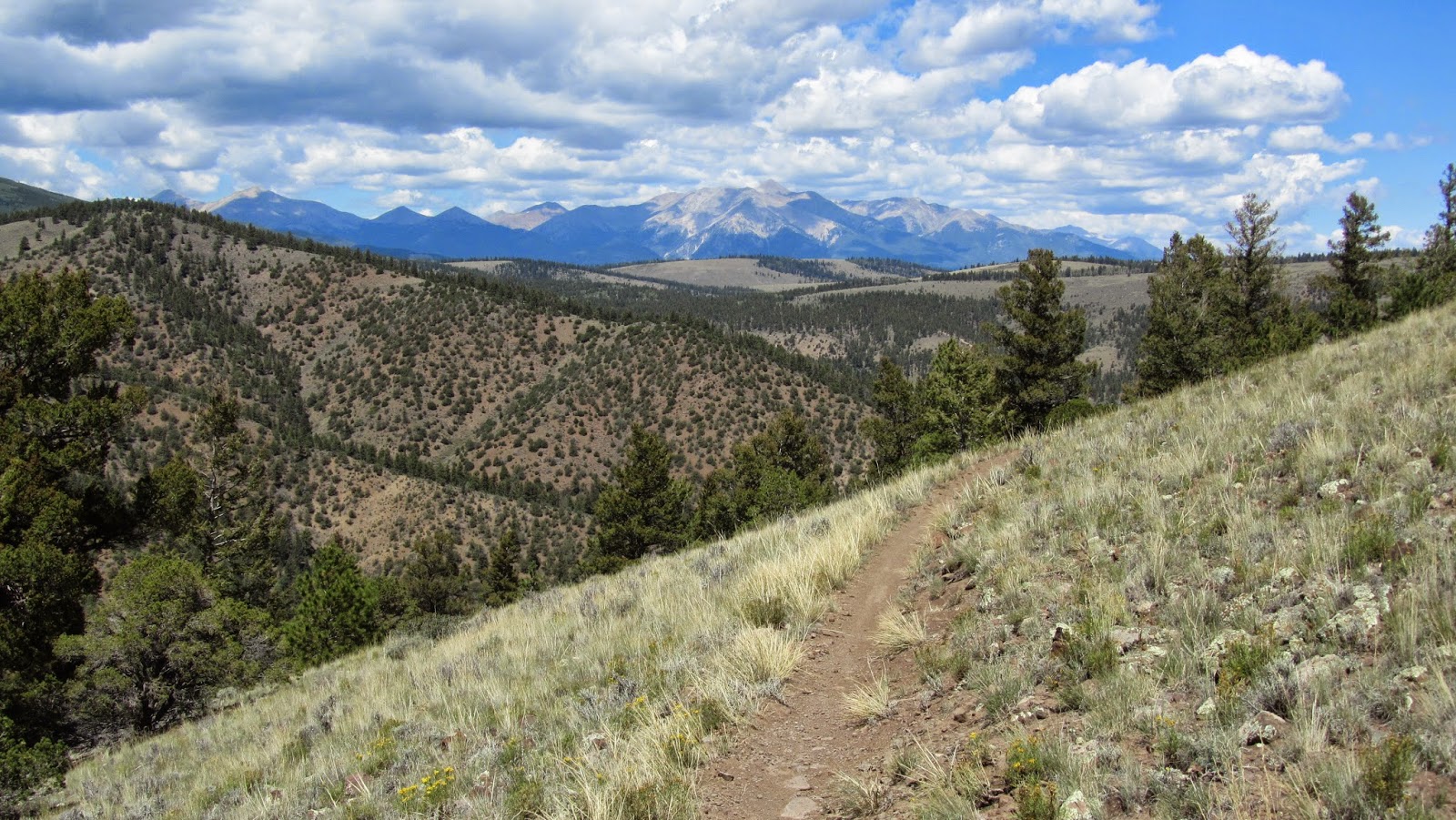 Looking toward Mt Shavano and its neighbors 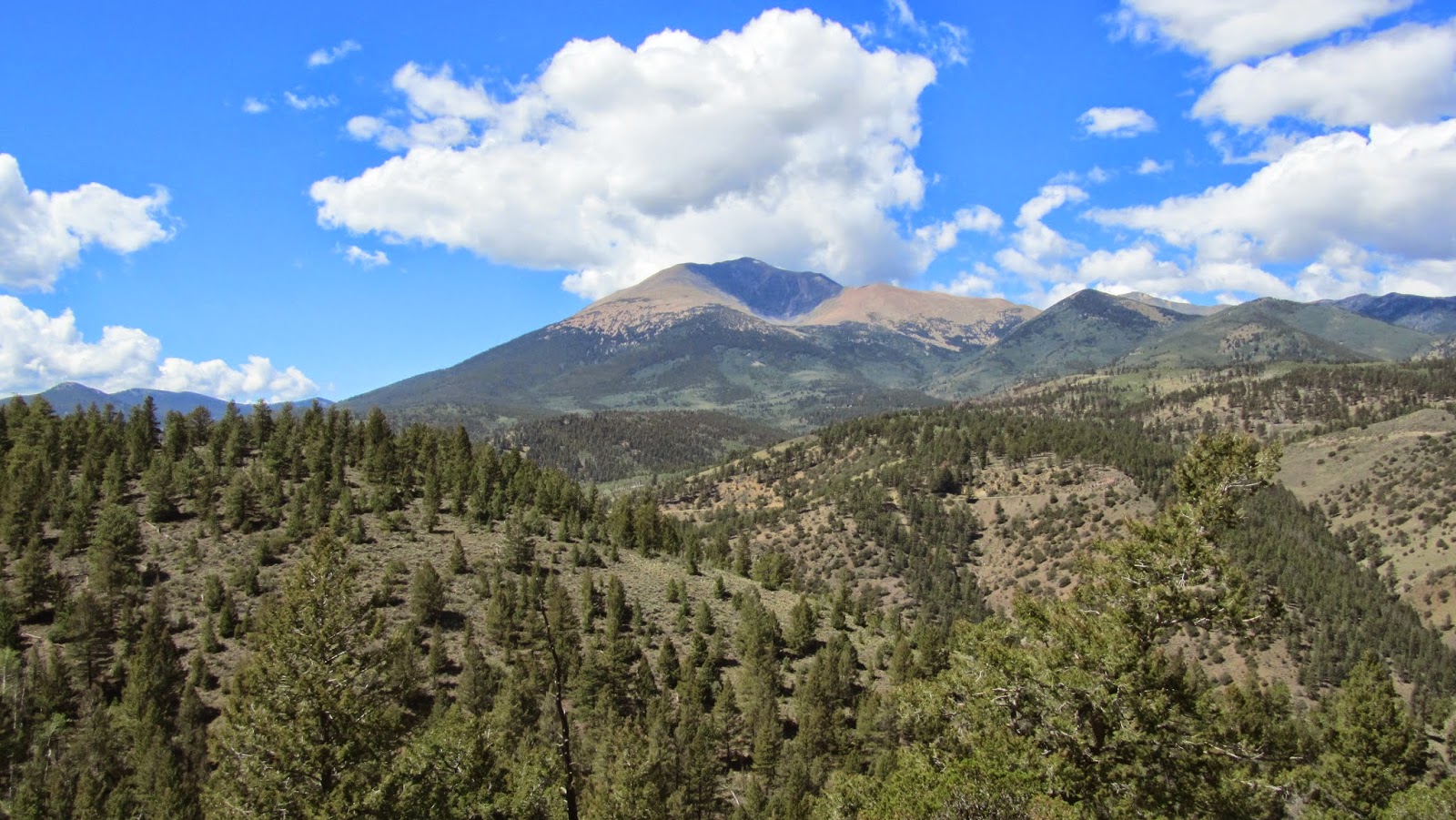 Overall the ride was fairly easy compared to the Triple Rainbow ride I posted about last time.  The loop was about 19 miles long and took about 2 hours to ride.  The elevations were between 8400 and 9500 feet.  This loop is listed as an intermediate ride in the local cycling guidebook and that seems like a fair rating.  I had a lot of fun on this ride without feeling too tired at the end.  This ride is worth checking out if you have an extra day in the Salida area and are looking for an easier ride.

To see the Map and elevation profile click here.
Posted by TOMCAT at 7:54 PM