Since moving to Colorado, I have been eager to take a serious mountain bike ride.  I have ridden over 150 miles in the past two months but most were easy rides on dirt roads just to stay in shape.  After hearing about potential riding on the Rainbow Trail, I attempted a couple rides on it but chose less than desirable sections that were miles of rock gardens.

Now that I live closer to Salida, I'm closer to better sections of the Rainbow Trail.  I picked up a local cycling guide that recommended sections of the trail to ride.  I also picked up a Salida Mountain Trails map at a local bike shop.  I originally planned on riding Rainbow Trail from Bear Creek to Methodist Mountain as an out-and-back but a rainy Friday postponed the ride.  After looking at a couple of maps I saw a potential loop linking the Rainbow Trail with trails in the Methodist Mountain Trail System.  There were a couple of options so I wasn't sure on my exact plans or route would be when I left Sunday morning for my ride.

I started my ride at the trailhead on County Road 101/49 about 3 miles off of US 50.  The ride started at about 7900 feet in elevation and climbed Forest Service Road 101 for more about 2.5 miles and gained more than 1000 feet.  The climb was steady but never too steep or too rocky.  There were occasional views along the way of the surrounding mountains.  The road followed Bear Creek along the way.  There was at least one short but easily rideable crossing of the creek. 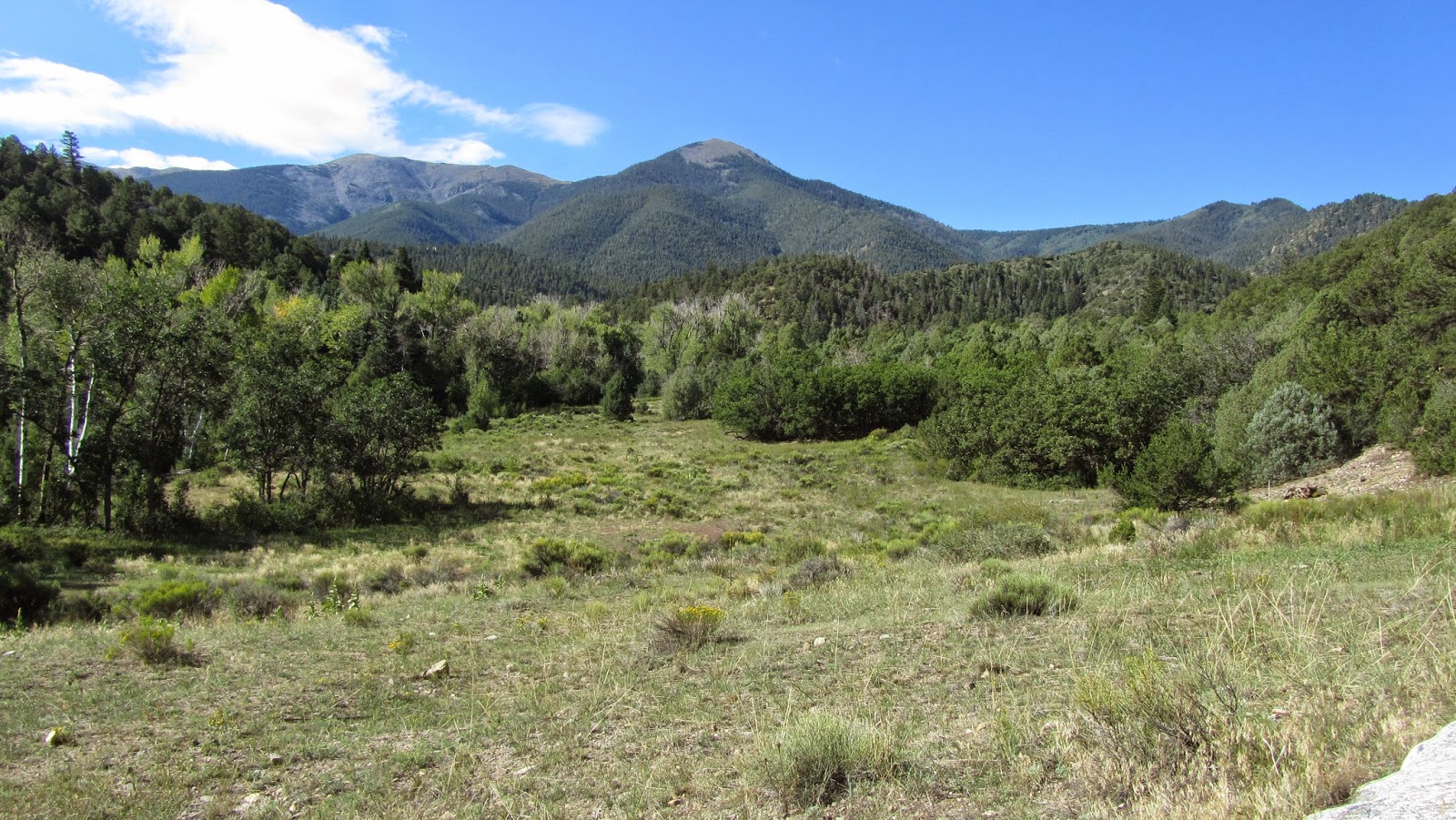 At the end of FS 101 I reached the Rainbow Trail and the fun began.  My book said that this section was smooth singletrack.  I was a little nervous after riding the treacherous rocky section of the Rainbow in the past but the book didn't lie.  The next 9+ miles followed beautiful singletrack.  The trail generally stayed between 8700 and 9000 feet in elevation with no big climbs or drops.  There were plenty of short elevation changes though as the trail weaved in and out of drainages.  Most of the trail was in the woods but it crossed through a couple meadows with fine views of the mountains surrounding Salida and even views of Salida. The singletrack often ran on a sidecut trail with a steep drop into the trees below. After the trail crossed the road to Methodist Mountain, there was a mile to mile and a half of loose, rocky trail that was tough to travel through but otherwise the entire section rode wonderfully. 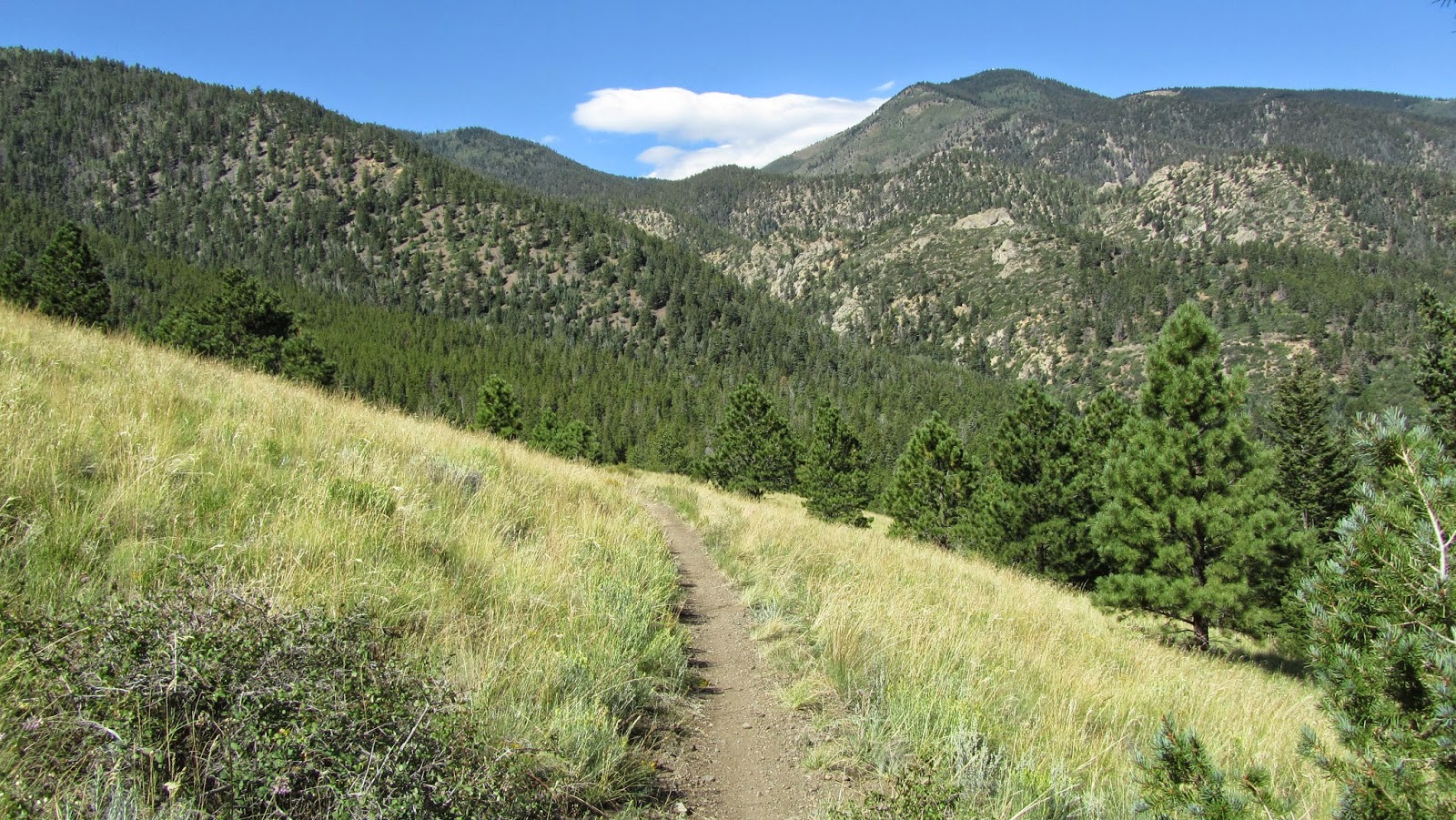 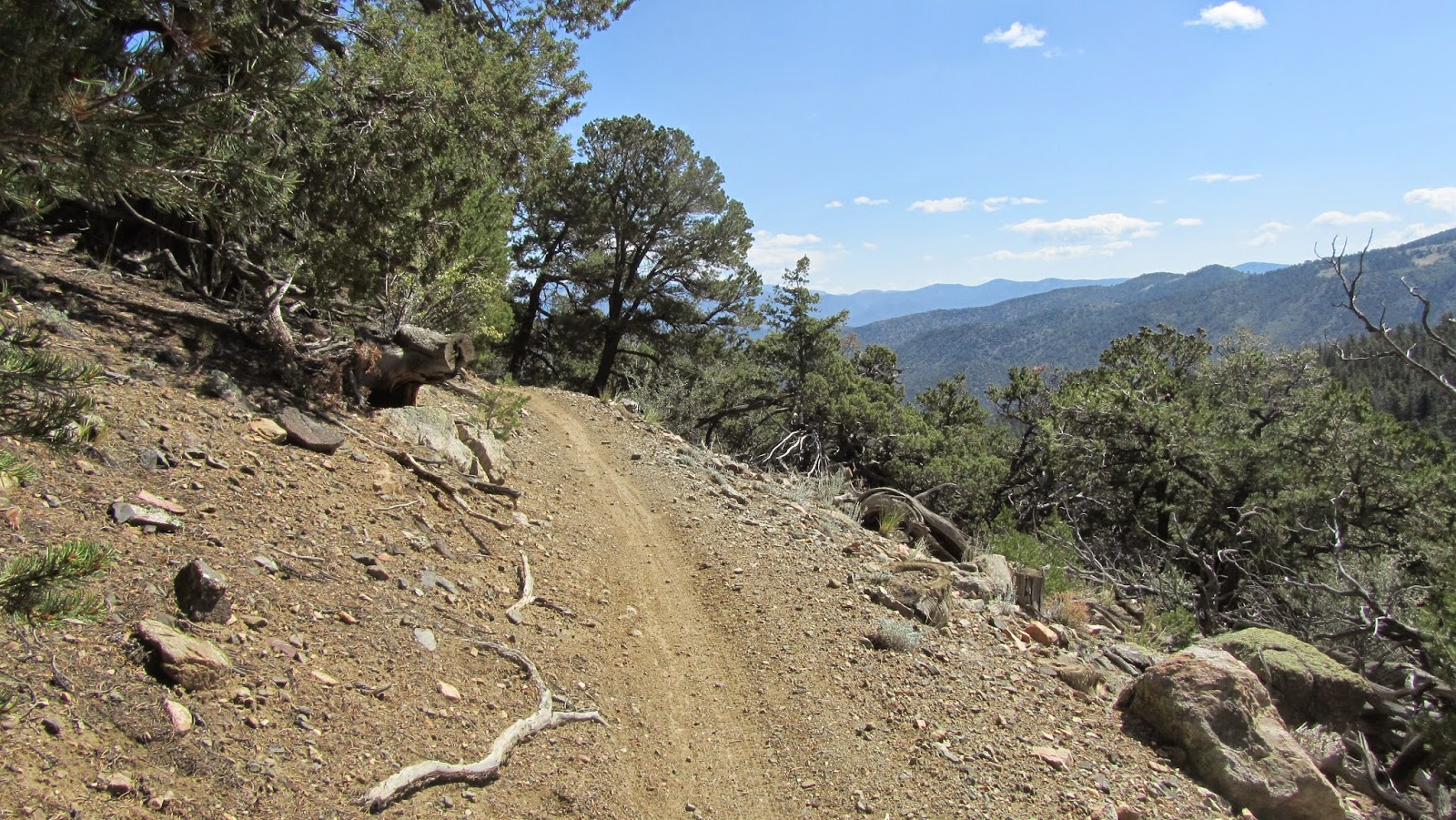 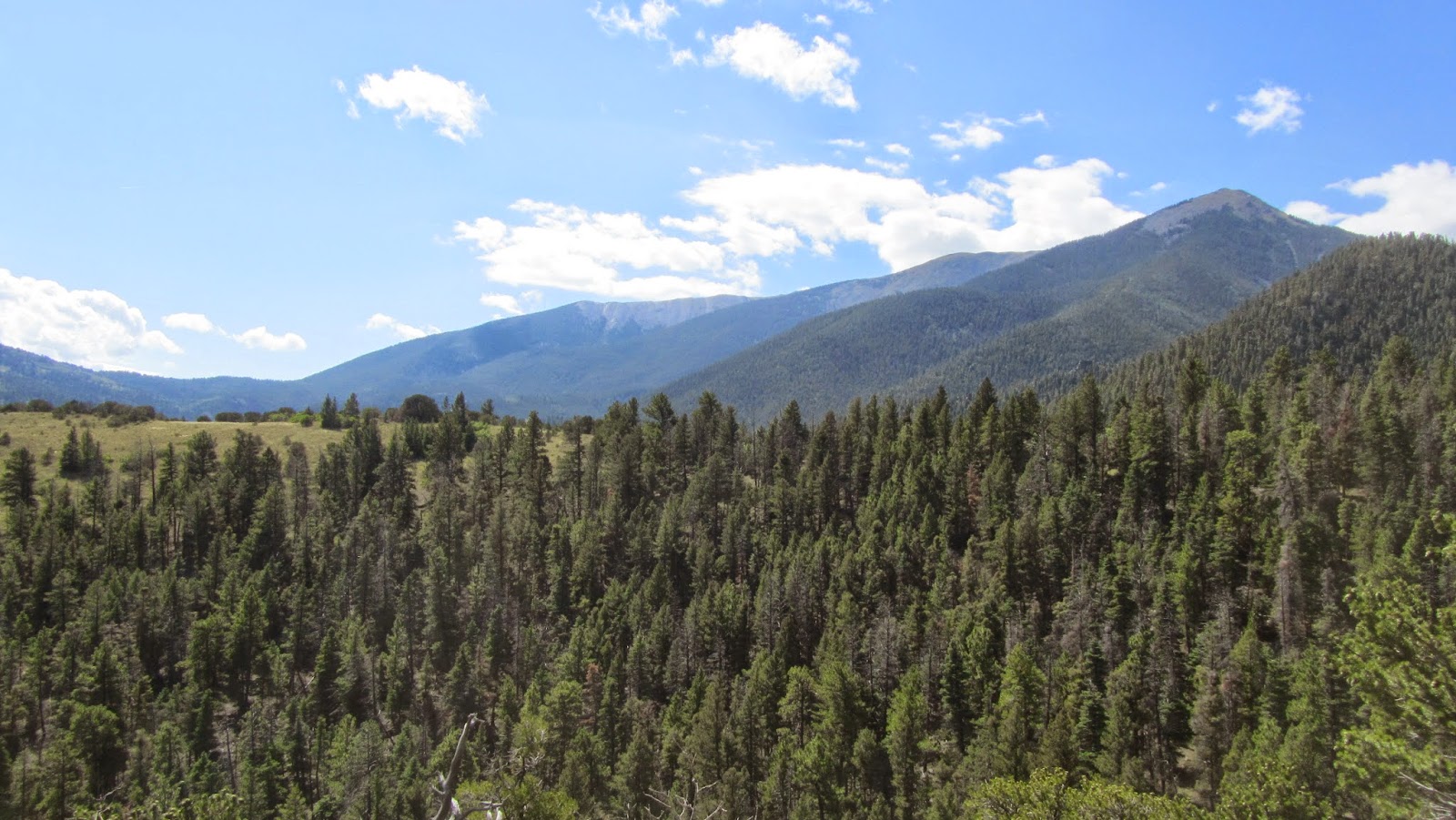 Looking back toward Simmons Peak 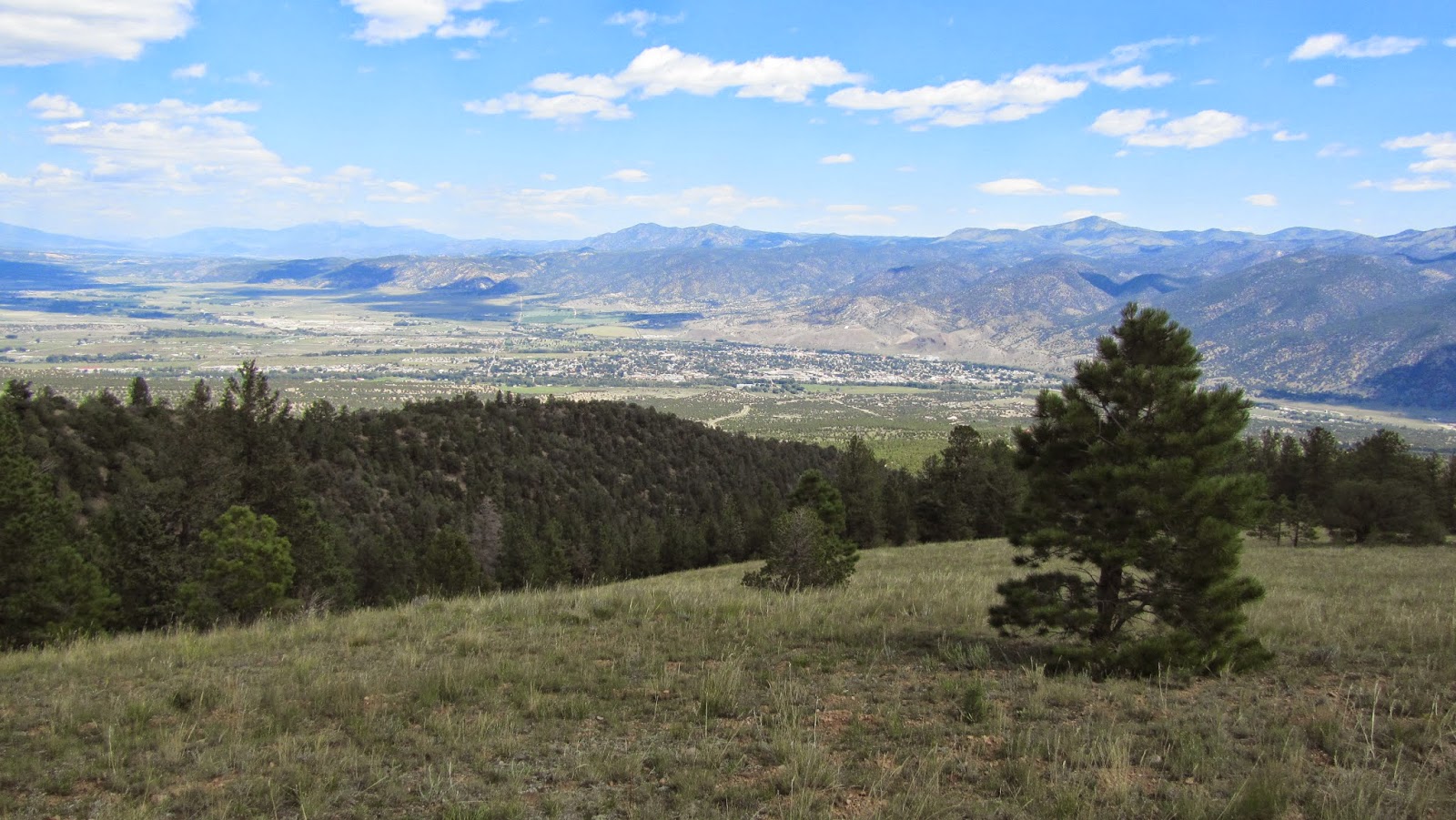 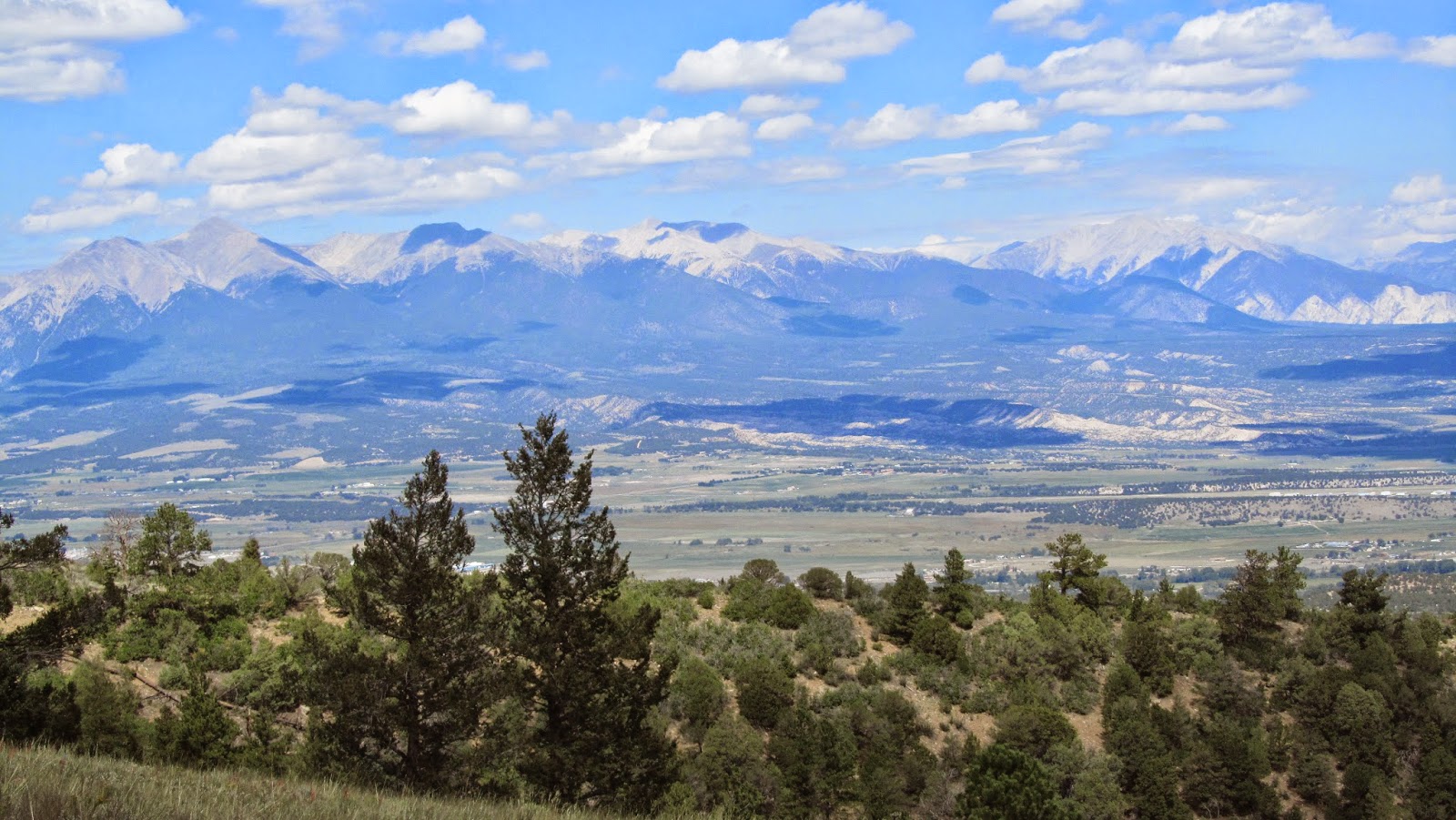 14ers across the valley 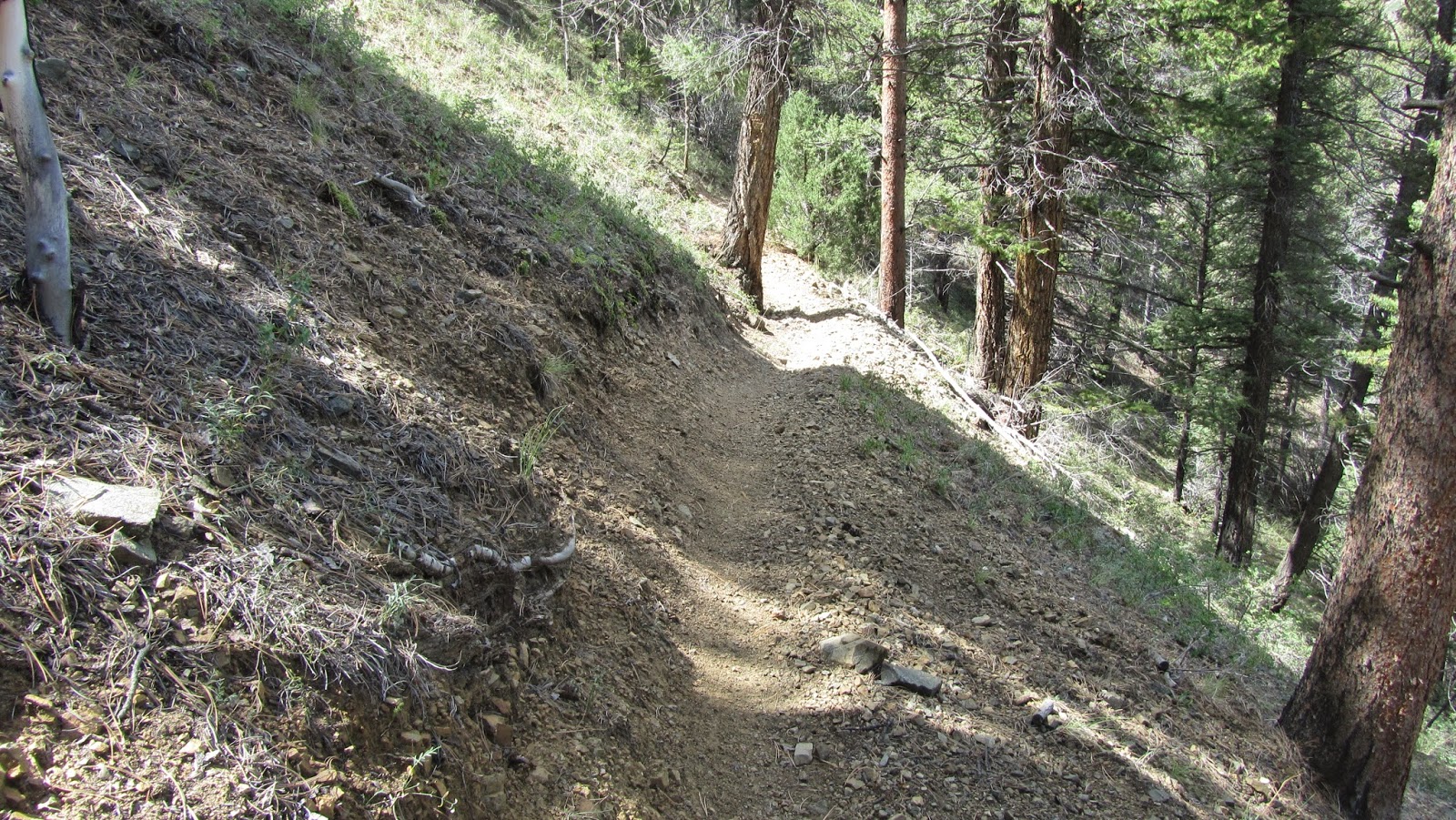 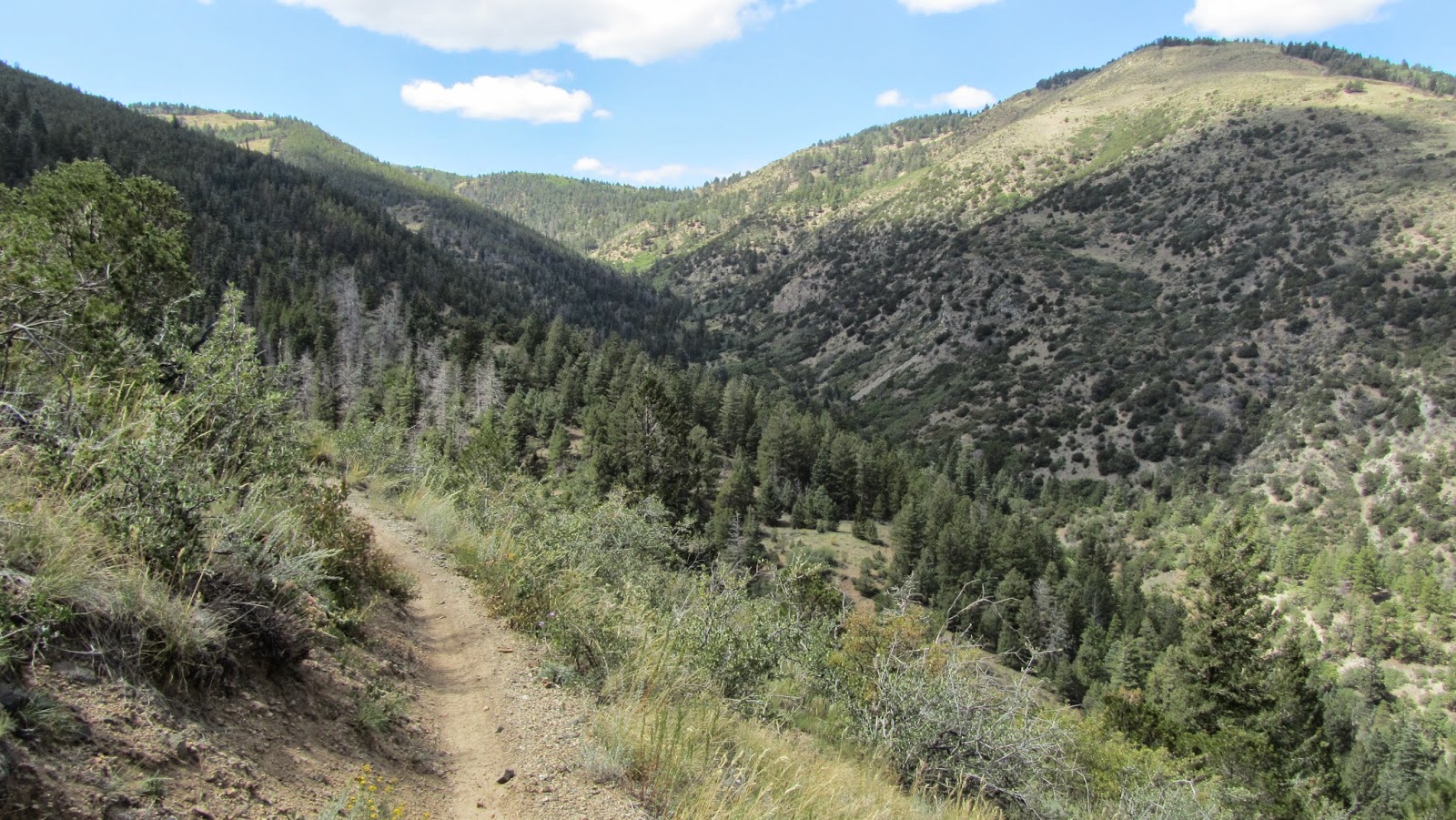 The next stretch of trail was the most difficult.  I descended down Sand Gulch on a rocky and rutted jeep road marked as FS 124 on my map.  This trail dropped roughly 1000 feet in about 2 miles on a jarring descent with plenty of loose rocks and washed out sections.  To keep me on my toes, I would cross through loose, sandy sections that would throw my bike around.  Since it was almost all downhill, this section ended soon enough.

The next 9 miles brought me onto the Methodist Mountain Trail System maintained by Salida Mountain Trails.  The entire 9 miles were on singletrack trails.  I started out on the Double Rainbow Trail.  Having lost quite a bit of elevation, I was no longer in the forest but in a semiarid high desert.  The scenery changed to scrubby trees and desert vegetation with cactus, yucca, and scraggly trees.  Double Rainbow travels on sandy singletrack with lots of sharp turns, short climbs, and descents as it travels in and out of drainages.  I had a minor spill when I took a sandy hairpin turn too quickly. 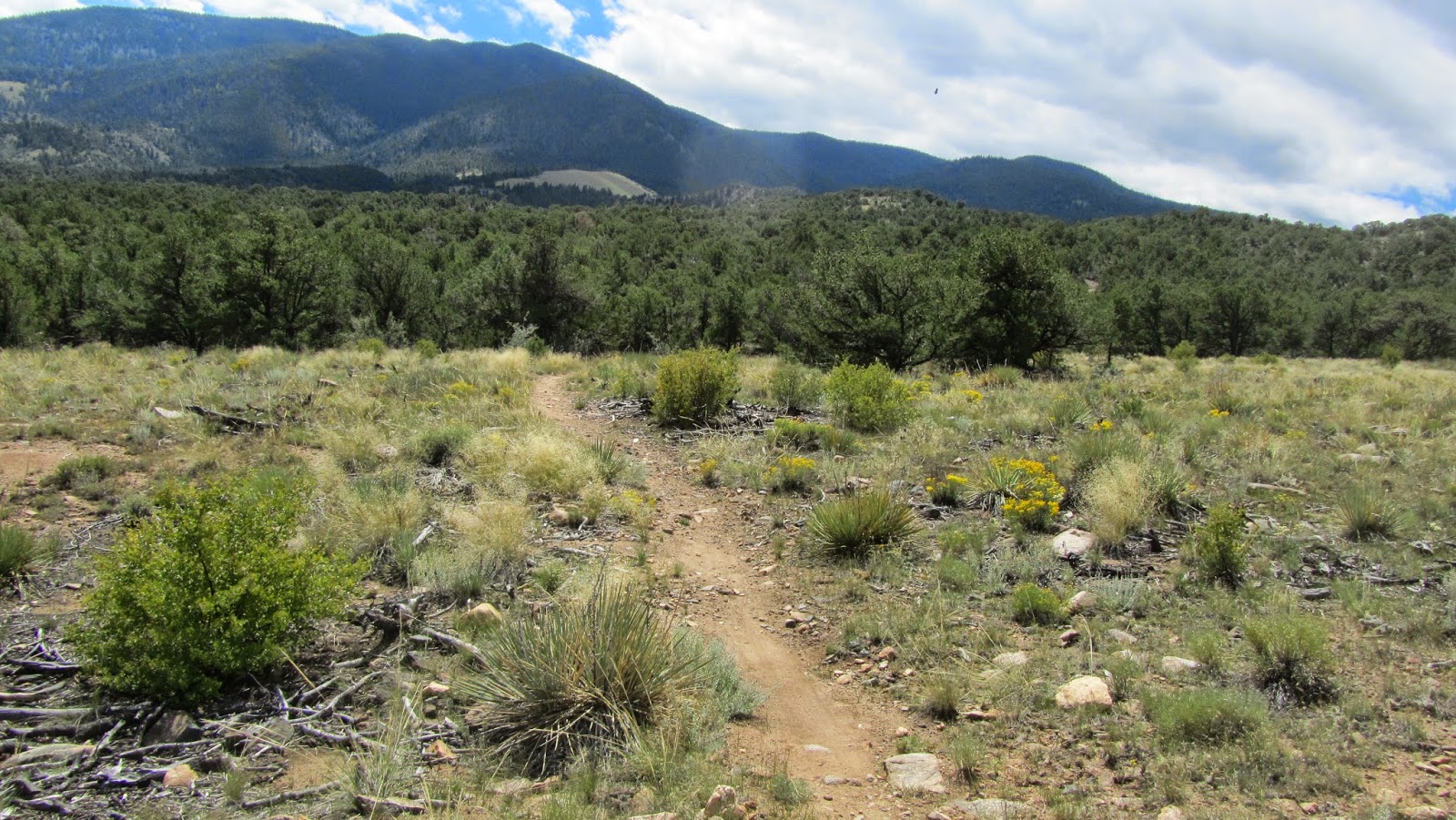 Semiarid landscape in the valley 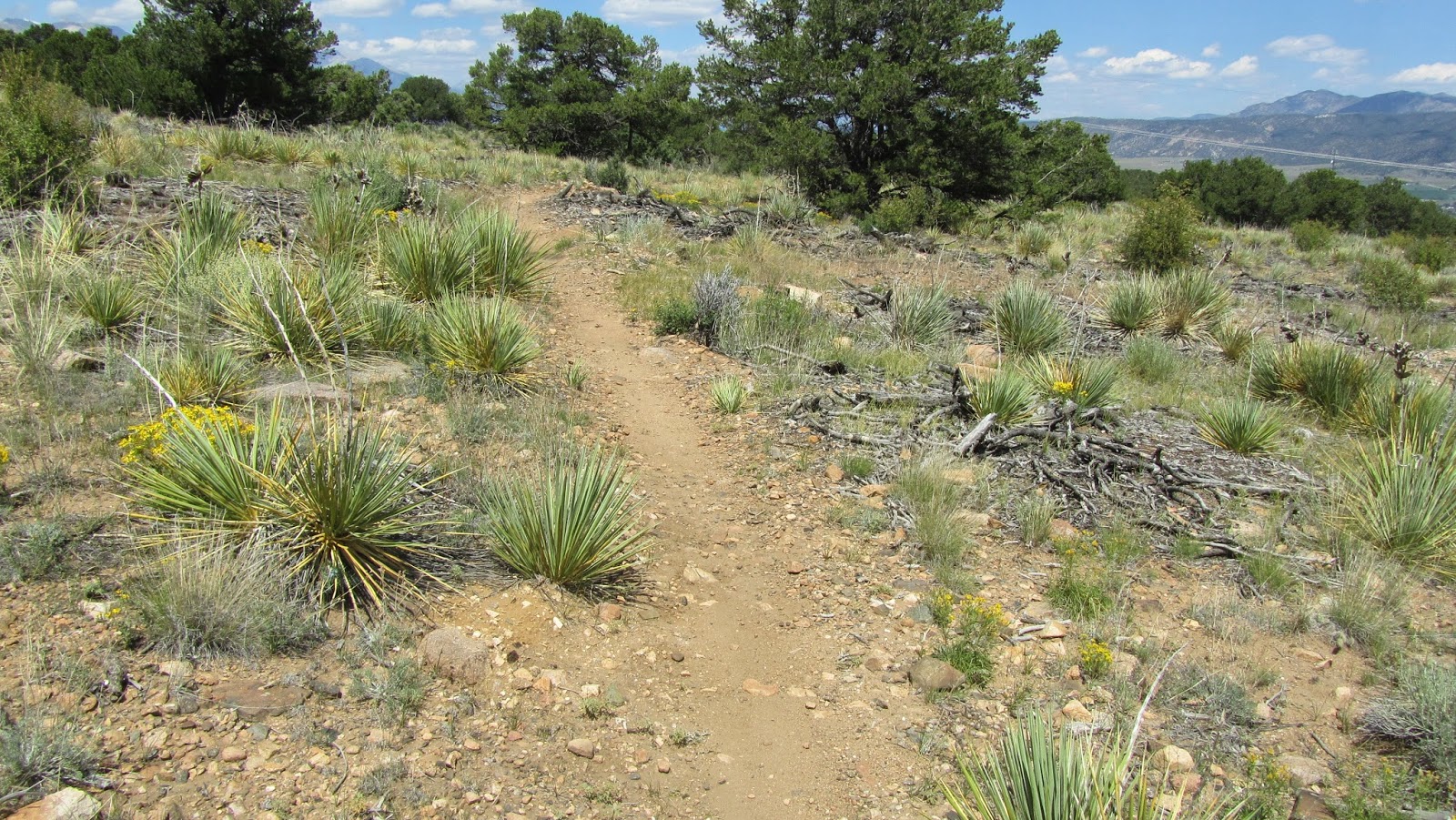 Yucca along the trail

The last leg of singletrack was on a trail called Race Track.  The majority of Race Track is downhill.  It was easy to build speed on Race Track which was tricky because there were quite a few washouts along it.  It also seemed sandier which made for loose traction.  The highlight of this section is riding along Castle Gardens.  Castle Gardens is a desert landscape with interesting formations.  Several hoodoos are visible along Race Track.  The end of Race Track dumps you onto US 50 about a mile east of Salida. 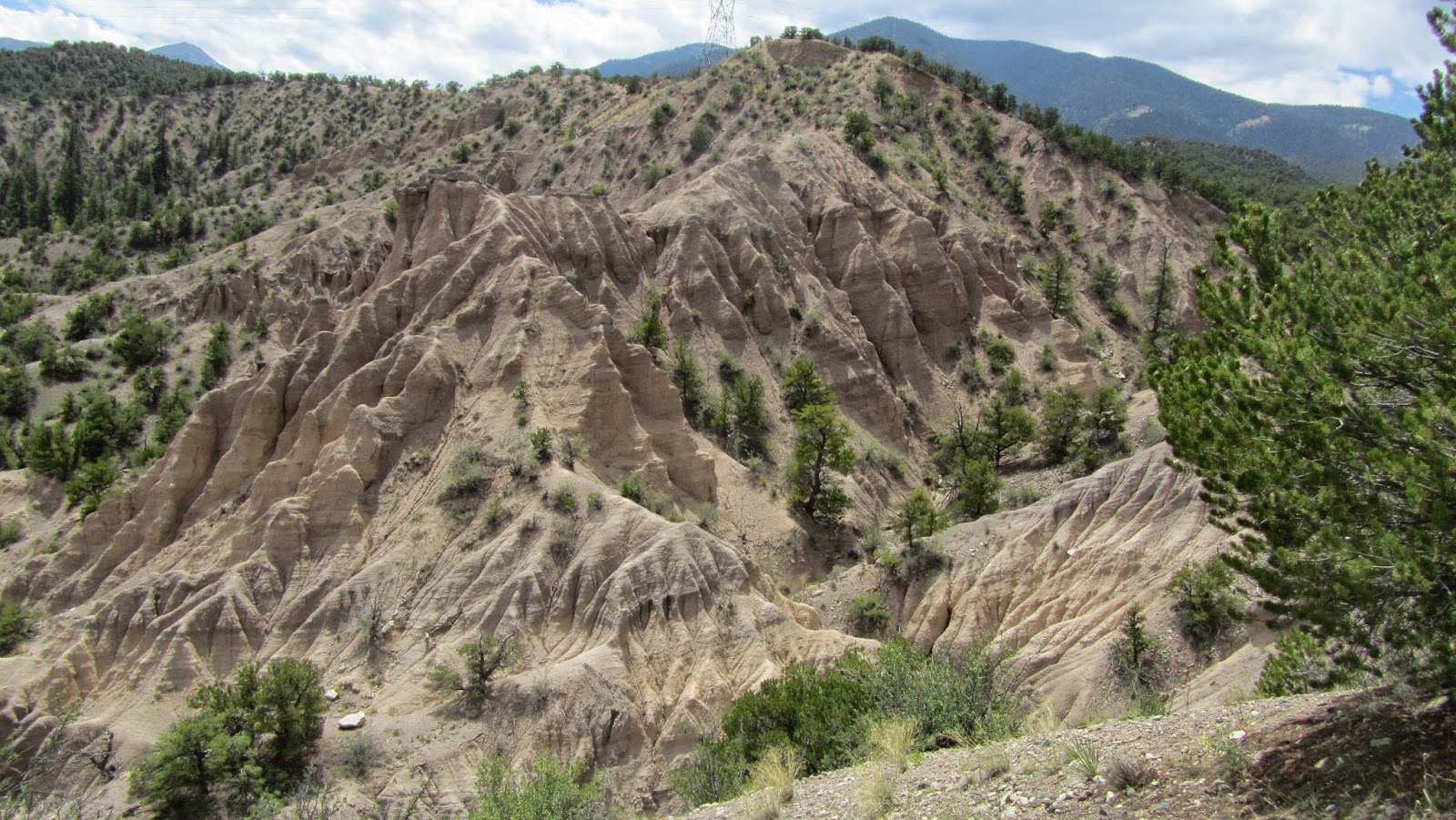 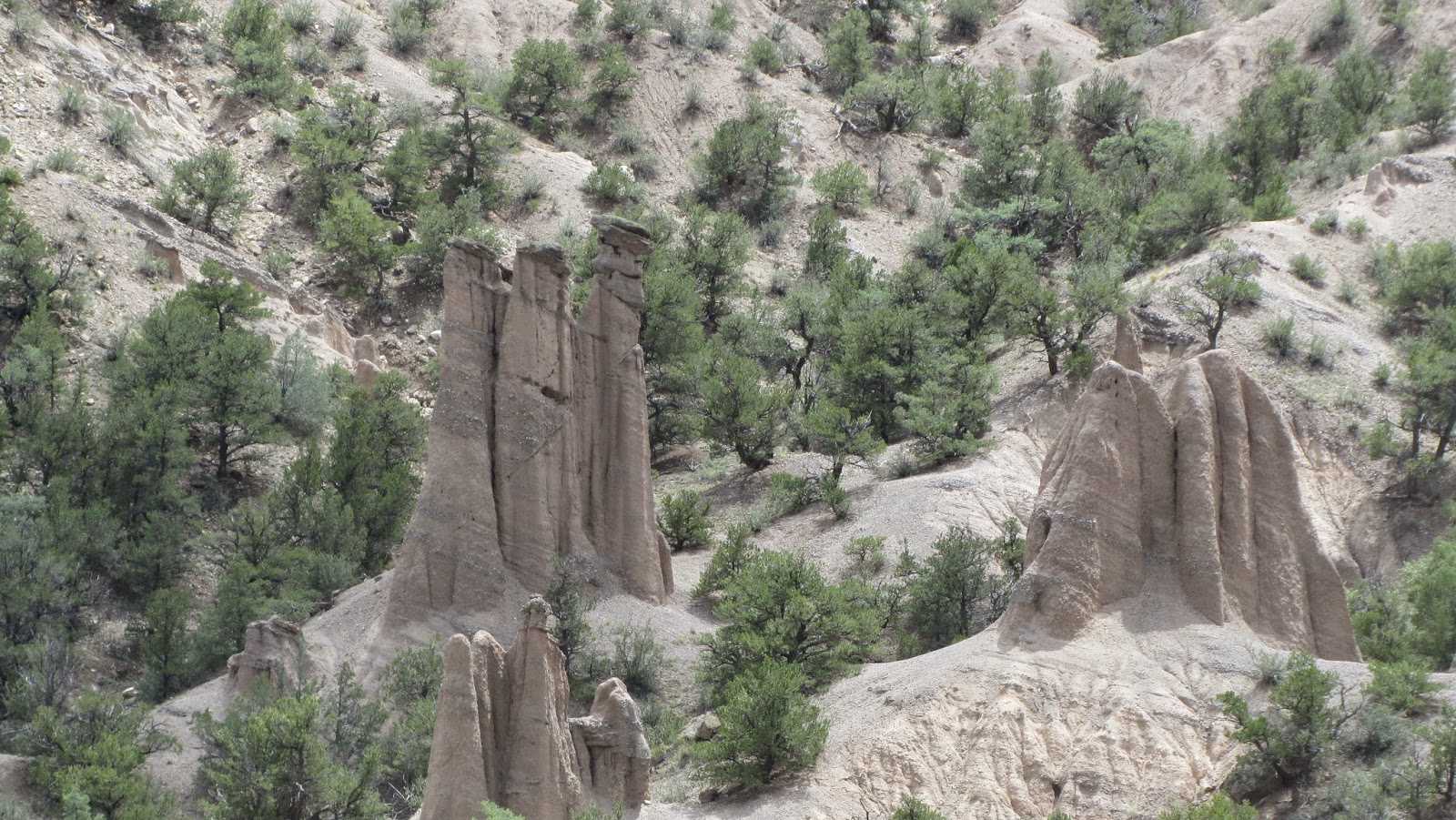 Less than 2 miles of riding on US 50 brought me back to County Road 101 and the low point of the ride at about 6900 feet along the Arkansas River.  I was feeling pretty good up until this point.  I had covered about 25 miles and was feeling it but not too exhausted.  I now had in front of me 3 miles and 1000 feet of climbing.  The last 3 miles is on a smooth dirt road but it is all up hill.  Even though it isn't too steep, it really wore me out at the end of my ride.  I probably should of ate a quick snack but just pushed through to the end.  According to my bike computer, I had ridden 28 miles.  It took me exactly 4 hours.

After the ride, I found that this route is called the Triple Rainbow.  It gets this name because it travels on the Rainbow Trail, Little Rainbow Trail, and Double Rainbow.  The version of the ride I found online is 23 miles and follows the Columbine Trail instead of climbing to the top of FS 101.  That ride is listed at 3100 feet of elevation gain.  It appears my route may have gained a little bit more than that.  Click on http://www.juicytrails.com/track_triple-rainbow.pdf to see the route. (My route didn't follow Columbine Trail but climbed FS 101 and added extra miles on Rainbow Trail)

This was one of the best rides I've done in a long time.  About 18 miles of the ride was on singletrack and less than 2 rode on the pavement.  Having lived in Maine the past eight years, there wasn't a lot of singletrack riding so this was a wonderful change from mostly logging roads in New England.  If I rode this ride again, I wouldn't save the climb up 101 until the end.  For a nice Sunday afternoon, I was surprised at how few people I saw, especially since this ride is accessible from Salida without a car. 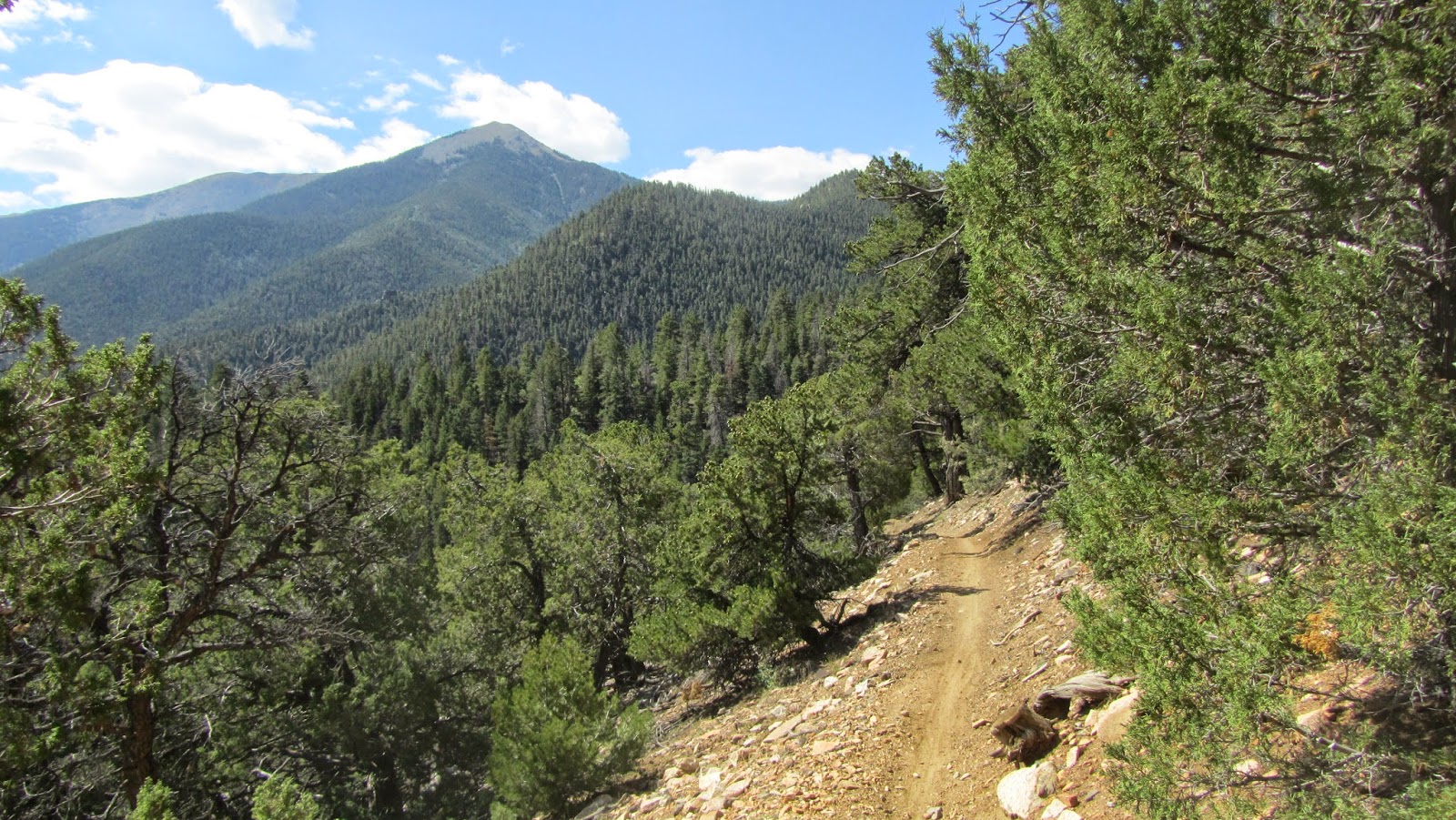 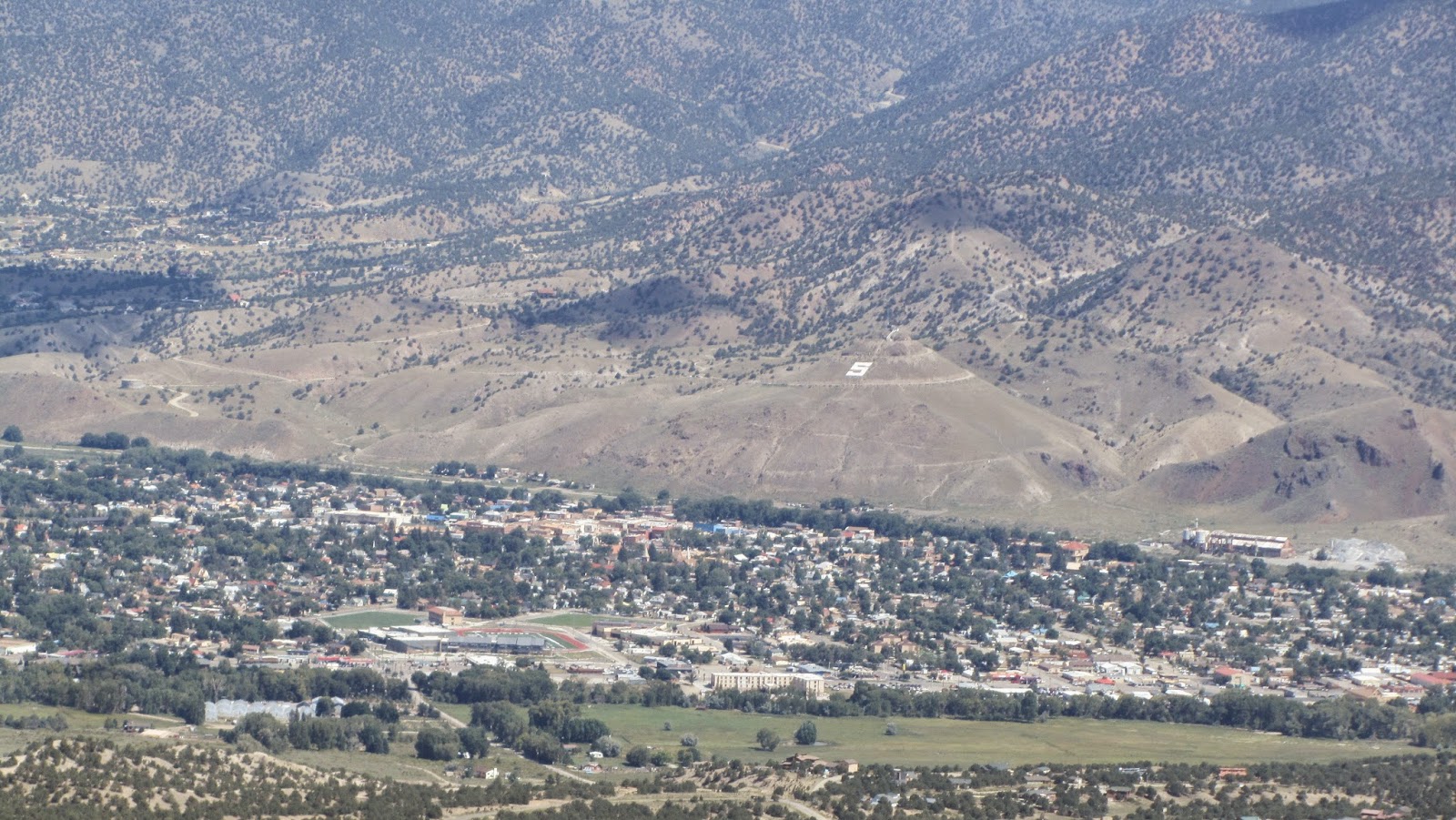 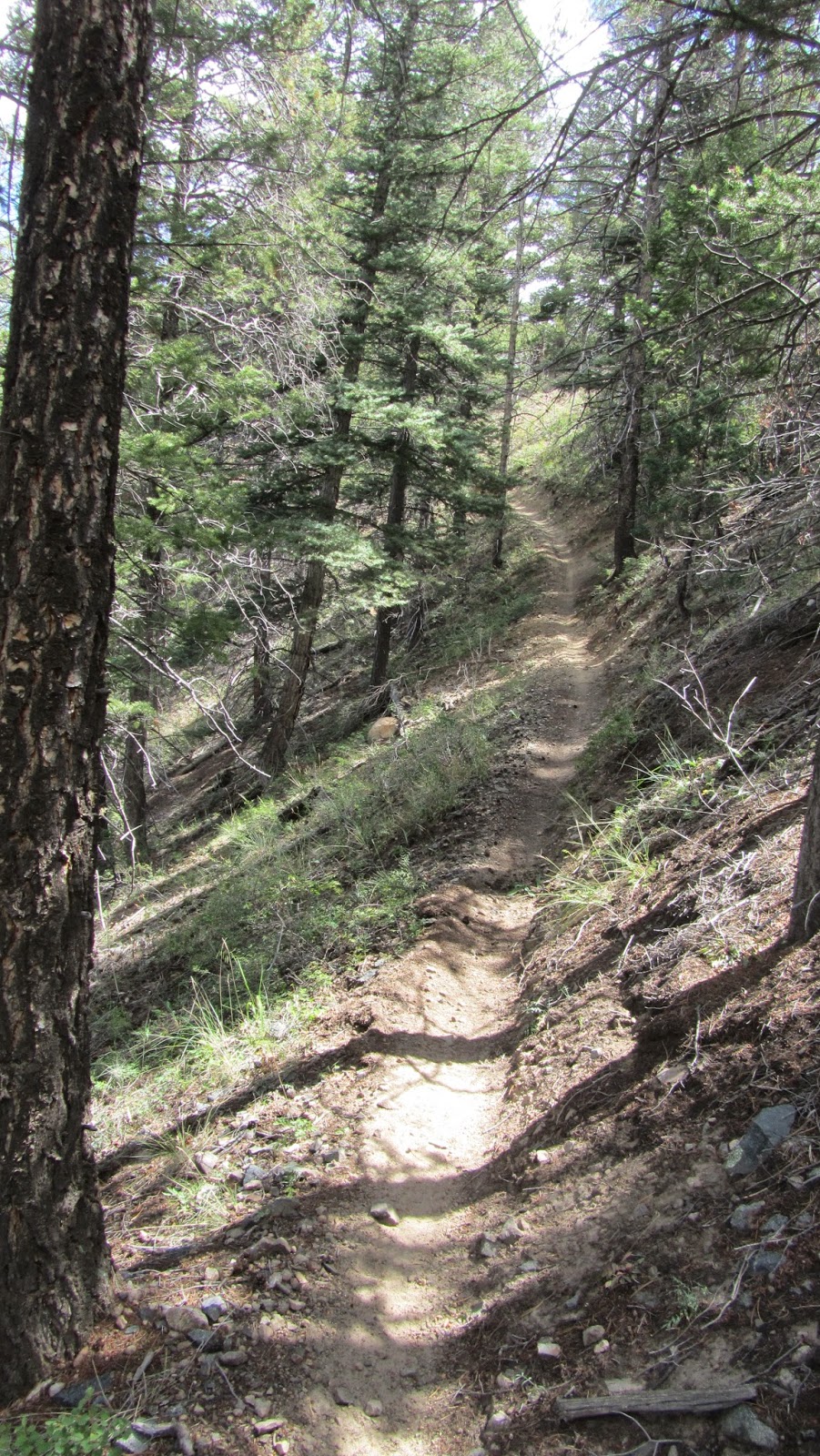 Endless singletrack on the
Rainbow Trail