A couple of heavy rains eliminated much of the skiable snow in my local area the past few weeks.  About 40 miles away is the AMC  land outside of  Greenville, ME. I talked in prior posts about cross country skiing the AMC trails in the 100 Mile Wilderness section of Maine.  Tucked in between several sets of mountains keeps the temps cooler and they managed to keep more of their snow and even had a couple new snows when it was mostly rain near my house.

I haven't cross country skied in nearly a month and was anxious to get out again.  A sickness last weekend kept me indoors so I finally got  yesterday.  There are many ski options mostly based around the lodges that people use for overnight stays.  Most people ski to one or the other and spend the night.  I wanted to do a big loop that went by both lodges, something most people do in 2-3 days.  This requires skiing about 35km (22 miles).  I did this a few years ago but was eager to try it again.

If interested here is the map for reference to my route:   http://www.outdoors.org/pdf/upload/L2Lski_2013.pdf

I started around 745AM at the winter parking lot.  I skied to the Little Lyford Lodge via the Hedgehog Gate Trail (7.0miles)  The Hedgehog trail is considered one of the more challenging trails with numerous steep but short climbs and descents and sometimes windy.  Besides a groomer I didn't see anyone else.  I reached the lodge as breakfast was ending so it was quite crowded.  I chugged a liter of water and refilled my bottle before quickly leaving.

I headed down the Lodge to Lodge Trail to Gorham Chairback Lodge about 6.5 miles away.  I had the trail untracked and to myself for about 5 miles before I passed a few groups that left the lodge for the day.  I had a quick snack at the lodge and rehydrated.  By 1045AM I was on the final leg of my outing, the 8.3 miles to the parking lot via the Long Pond and Trout Brook Trails.  I made it about 5 miles before I started passing a few groups that had left the lodge earlier as well as a few groups just starting out from the parking lot. Despite more than 30 cars in the parking lot, I saw relatively few people. Perhaps the roughest section of the entire trip is the last hill to the parking lot.  It is the longest hill probably on the entire trail system just when you are ready to be done for the day.

I made it to my car about 1225PM after about 21.8 miles.  It was my longest outing of the year on cross country skis.  I was surprised myself that I finished the long loop in less than five hours.  I now have about 150 miles of  cross country skiing this year.  Easily the most I have done in a single season.

Clouds throughout the morning hid most of the mountain views but the trails were pretty with freshly fallen snow hanging on the trees.  As always I saw a wide variety of animal tracks from hare to coyote to rodent to moose.  The only worthwhile sighting I had though was a pileated woodpecker that quickly flew by. 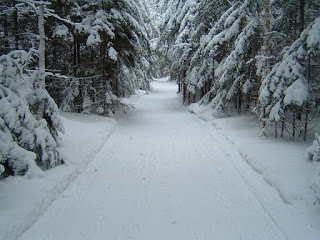 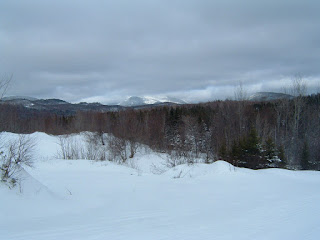 Here are a couple links about the cross country skiing at the AMC 100 Mile Wilderness Trails
http://www.outdoors.org/lodging/mainelodges/backcountry-skiing/index.cfm
http://viewer.zmags.com/publication/542f0be6#/542f0be6/62
http://www.easternslopes.com/2012/11/01/greenville-maine-and-the-100-mile-wilderness-finding-snow-in-the-winter-that-wasnt/
http://www.pressherald.com/life/outdoors/adventure-at-amc-lodge-has-some-comforts-too_2012-02-19.html