Before the ski season I purchased a half priced lift ticket to ski Saddleback.  Today was the first day that I was able to get to the mountain with decent snow and no blacked out dates.  I didn't know just how good the conditions were going to be.

Saddleback is the third largest ski area in Maine.  It's summit sits over 4000 feet making it Maine's snowiest ski area.  Located in Rangeley, Maine, it is far away for most people and they often go to Sunday River or Sugarloaf instead for big mountain skiing in Maine.  The mountain has a great variety of terrain for all levels and 2000 foot of vertical and is often less crowded than the other two mountains.  Best of all, lift tickets are a bargain compared to Sugarloaf and Sunday River.

I made the snowy drive to Skowhegan, ME where I  met up with the J Man before heading to Saddleback and we were at the mountain just after it opened.  The skiing gods worked in our favor today.  Overnight snow dumped about four inches of fresh snow overnight and the snow fell throughout the day dumping a few more inches.  For whatever reason there was hardly anybody skiing.  Never did we have to wait more than a couple of chairs on any lift.  That made for some great runs.  We made quite a few runs in the glades as the snow was soft and forgiving.  My second run of the day I skied solo into Casablanca Glade which is 44 acres of fine tree skiing and there was only two tracks in the snow.  It's rare to ski powder that fresh.  As we tired running numerous glades and some trails with fresh powder we mixed it up with some long cruiser runs.  I made at least ten runs in the glades by days end.  The conditions were primo throughout the day.  Late in the afternoon the main lift from the base had technical problems and shut down and we finished with a few passes through the terrain park.

http://www.saddlebackmaine.com/downloads/2012-2013TrailMap.pdf
Looking at the trail map some of the best runs were Casablanca Glades, Dark Wizard Glades, Thrombosis Glades, and Intimidator Glades

The snow continued to fall as I drove home making for a hairy ride the last hour or so as the plows couldn't keep up.  Skiing the trees and powder wears you out compared to skiing groomed trails all day and my legs were feeling, especially after the long cross country ski trip the other day.  I was very happy to dig into the lasagna Puma had made when I got home.

Despite a mediocre snow season I have lucked out with the powder days this year hitting the slopes several times the morning of a storm. 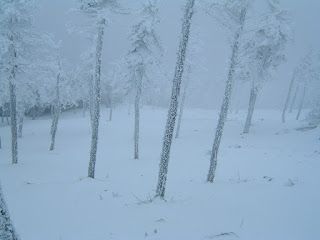 Foggy high up in Casablanca 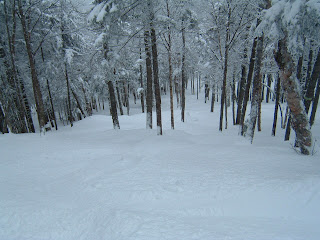 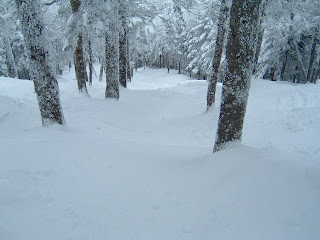 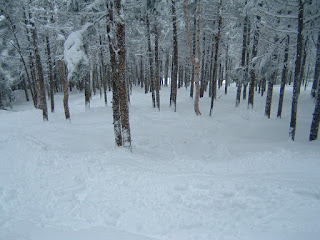 Getting into the tight trees on Intimidator 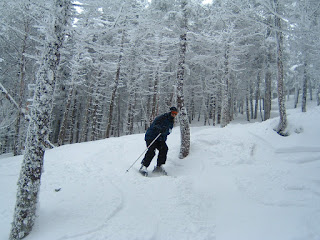 J Man skiing the glades for the first time