Before the ski season started this winter I bought a coupon that gave me a bunch of lift tickets for a steal of a price.  January and early February saw little new snow and a couple of big thaws so I was hesitant to plan any trips.  Finally last weekend New England got some decent snow and I immediately planned a three day trip.  I checked the weather maps every hour tracking the storm to see which resorts I wanted to ski.

Sunday I decided to hit Cannon Mountain in New Hampshire.  They did the best in the snowstorm picking up as much as 18 inches.  I got up at 3AM Sunday morning allowing extra time for travel in case the roads were in rough shape.  I made the four hour drive without any serious snow on the road stopping briefly for breakfast and was at the mountain early enough to be in line when the lifts started spinning.
The weather and skiing was wonderful.  Despite starting out around 0F first thing in the morning, the temps warmed up to near freezing without a cloud in the sky and absolutely no wind.  The snow conditions stayed pretty good throughout the day.  Despite being fairly busy I had hardly any wait in the lift lines.  I think I hit nearly every trail that was open.  Except for about 15 minutes for a quick lunch I skied from 830 when the lifts opened and finished my last run a few minutes after 4 when the lifts closed.

I wasn't sure where I was headed for the next day.  I called home to Puma to get trail and weather updates to plan my next days.  After a quick dinner at Subway I headed to Smugglers Notch in Vermont.  To save money I decided to make reservations at the Subaru Motel...that is sleep in the back of Outback.  I arrived at Smugglers Notch around 9PM and headed to one of the outlying parking lots that was dark and empty and set up camp.  I fold down the back seat, lay down a sleeping pad, and crawled into my zero degree sleeping bag.  It was 0F at a bank thermometer I passed so I was in good shape.  I fell asleep quickly since I was awake at 3AM and skied hard all day.  About 1215AM  I was awakened by a knock on my door and a flashlight by security making me move.  I drove three miles down the road and parked at a roadside picnic area and slept uninterrupted until morning.

I was back at Smugglers Notch by 8AM.  I ate some packed breakfast and was on the slopes by 830.  The weather was not quite as nice.  The wind was howling and it was very gloomy.  Soon it started snowing.  Smugglers Notch did not do as well as Cannon with snow.  The trails had lots of thin cover and bare spots.   Not long after it started spinning one of the main lifts closed due to windy conditions.  I did have fun on the remaining trails again hitting every trail that was open.  The wind was raw especially with the snow pellets.  As the day went on the top of the mountain was completely socked in the clouds making the visibility tough at the summit.  I skied again until 4 when the lifts closed.  It was far from the best conditions I have skied.  More than a few times I skied over bare spot with visible ground.  It was fun nonetheless.

I headed to Jay Peak in northern Vermont for my last day.  The Subaru Motel this time was located about a mile from the ski area at a parking area for the Long Trail hiking trail.  When I got there it was snowing heavy  and calling for a couple inches.  Through the night I heard a plow truck pass numerous times and figured it was a good sign.  When I got to the ski area there was at least four inches of new snow and coming down hard.

I was on the trails at 830.  The snow was piling up and the wind howling.  Part of the mountain was closed due to winds making the lifts unsafe.  I stayed on the remaining lifts which cover a lot of the tougher terrain.  By lunch the other lift opened and the snow was still coming down.  If I had to guess there was at least 8 inches of new snow.  Jay Peak claimed there was 14 inches by the next morning.  The conditions were about as good as they get.  The steepest trails skied easily in the deep powder.  I skied more than a half dozen runs in the trees.  Jay is known for its glade skiing and I could see why, the glades were abundant and skied nicely.  The deep powder made for fresh tracks all day in the trees.  Near the summit the visibility was so bad from fog and snow you couldn't see the next chair on the lift and it was so windy I was actually a little nervous how the chair swayed.  About 3PM I made my final run.  Skiing in the powder is a lot more work.  I had skied about 20 hours in three days and my upper legs were fried.

I made the five hour trip home through lonely back country in VT, NH, and Maine.  The first half of the drive was in snow.  By the time I got to Maine it was dark and the snow was piling on the road making driving a treat.  Shortly after 8PM I was happy to be back home and see Puma...and rest my legs. 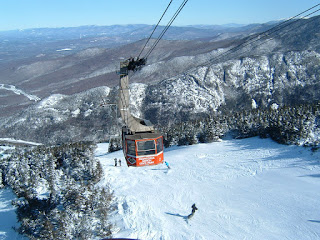 The tram at Cannon Mountain 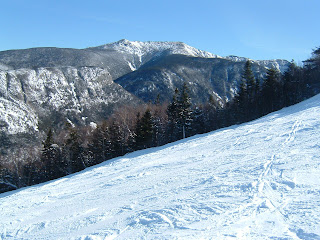 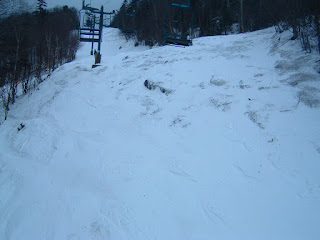