I have been eager to do some hikes in the higher mountains in the area like Katahdin or the Presidentials but the weather hasn't been cooperative.  Yesterday brought heavy rain and showers fell throughout the day today.  I don't want to hike to the summits to have zero visibility in the clouds.  One of the best places to hike after heavy rain is somewhere with waterfalls.  The hike at Gulf Hagas passes numerous waterfalls in a relatively short distance.  I have done this hike several times before but with high water levels I expected the falls to be gushing, and they did not let me down.

Gulf Hagas is located just about in the dead center of Maine just off the Appalachian Trail.  It is a popular hiking destination in Maine and attracts quite a few people on a summer weekend.  Gulf Hagas is referred to as the "Grand Canyon of the East."  While it does flow through a canyon, that moniker is a tad overdramatic.    Go for the waterfalls alone and you won't be disappointed.

The most popular access point is from the Katahdin Ironworks (KI) Road.  To get to the Gulf, one must ford the Pleasant River.  This is a fairly wide crossing and after the heavy rain makes the ford potentially dangerous. There is also a tricky crossing of Gulf Hagas Brook that involves crossing over a downed tree or fording the very fast brook.  I decided to hike in from the upper end of the Gulf.  Both routes are over 8 miles of hiking with the route I chose being slightly longer but slightly quicker without the ford.

The hike begins on AMC trails leading to the Pleasant River Tote Road, an old logging path that is now a hiking trail.  I chose to hike clockwise so I would have the scenery build as I hiked.  The Tote Road is a fairly flat stretch of trail that tends to be boggy and has many long stretches of bog bridge.  After several miles I reached the Rim Trail and the start of the waterfalls.

The first waterfall is Screw Auger Falls.  This consists of several drops.  Although the first drop is probably the highest, the second drop is the most scenic and a very popular subject of photographs.  Further downstream the brook continues to cascade over several more smaller pitches. In total there are at least a half dozen different drops in this area.  Several swimming holes invite hikers below several of these falls. 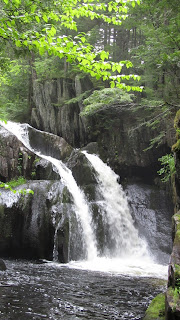 The upper falls of Screw Auger Falls, also the highest 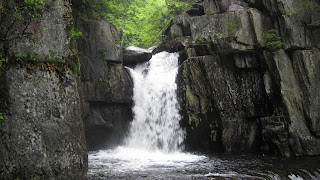 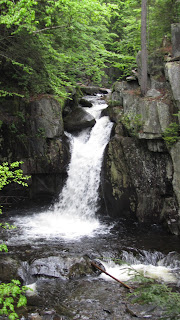 Another view of Screw Auger Falls 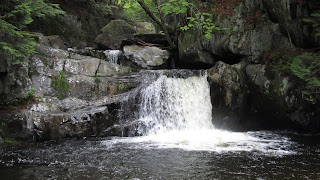 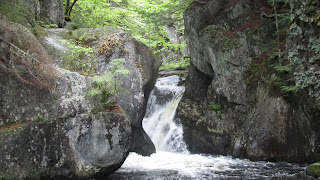 Leaving Screw Auger Falls the trail climbs to the rim of the canyon.  Several lookouts take you to the edge of the canyon to capture views of several smaller drops and the walls of the canyon.  The next waterfall with a significant drop is Buttermilk Falls.  A short side trail drops to water level to the base of the rushing waterfall.  A deep hole below the falls makes for a nice spot to swim.  Just beyond the waterfall, you can look down upon the falls from above. 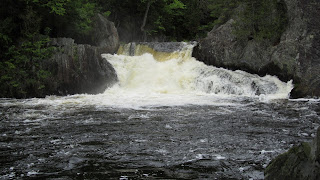 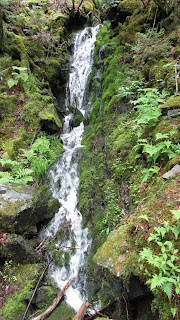 The trail continues following the canyon rim with several more views into the canyon before reaching Billings and Stair Falls.  Billing Falls seems to have the most volume of water passing over of any of the waterfalls on the hike.  There is no trail leading to the falls but the view from the trail looking down to the falls is impressive.  Shortly after Billings is Stair Falls which consists of a series of small drops resembling a set of stairs.  Above Stair Falls is the Head of the Gulf.  Puma and I had lunch at this spot overlooking Stair Falls when we hiked here a few years ago.  Above the falls is fairly deep and sandy and made for a nice spot for Puma and I to cool off.  The trail returns to the Tote Road just beyond the Head of the Gulf.  Once on the Tote Road I retraced my tracks back to the trailhead. 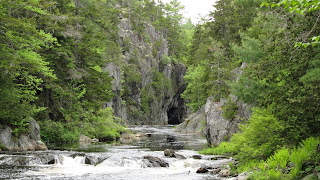 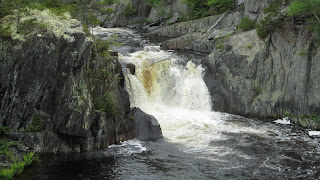 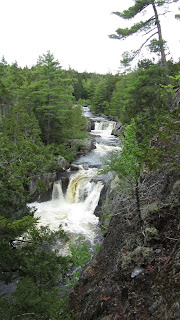 Billings Falls and canyon above 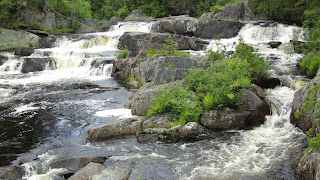 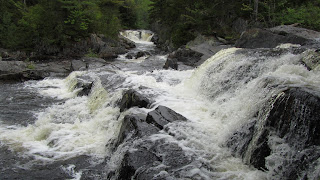 The hike of Gulf Hagas is moderately difficult.  The seasoned hiker should have little difficulty but it could be strenuous for the casual visitor, especially if fording the Pleasant River.  Even though the trail doesn't have significant elevation gain, the area tends to be wet longer than most areas making for treacherous footing over slate and never-ending roots.  Lots of small ups and downs over wet roots can be tiring.  With the recent rain the trail was exceptionally slippery with areas of slate being as slick as ice.  It rained on an off as I hiked and that kept the people to a minimum.  The recent rain also made for magnificent conditions of the falls.