Little Moose and the Tale of Two Beavers

Wednesday turned out to be a picture perfect day so Puma and I decided to take advantage of the nice day.  We decided on a hike at Little Moose Mountain near Moosehead Lake.  We have done this hike together several times and the trip never disappoints us.

Little Moose Mountain sits just a few miles from Moosehead Lake and the town of Greenville on state land called Little Moose Public Reserved Land.  The mountain was originally called Little Squaw Mountain until the term "Squaw" was deemed offensive by the state of Maine and all such named places were renamed "Moose."  Being so close to town makes it one of the more popular hikes on the many trails in the Moosehead Lake region.  There are several trails on the mountain but the most popular is the Loop Trail that makes a circuit around some small ponds with designated campsites and several rock outcroppings with excellent views. 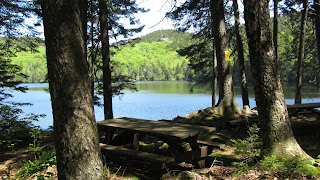 We chose to do the Loop Trail in the clockwise direction.  This direction allows for a buildup of the views with the best view near the end of the loop.  From the trailhead we reached a junction for the first of several campsites.  Soon we reached the outlet of Big Moose Pond.  There is a view of the ridgeline that the Loop Trail later traverses.  The trail passes the shore of Little Moose Pond passing two campsites.  The trail stays low passing over large section of bog bridge to avoid swampy areas.  The trail soon ascends to the top of the ridge where it passes over several humps.  There are several rock outcropping with good views, the last one being the best. 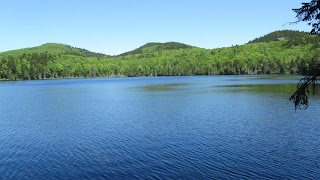 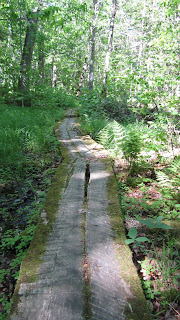 The view from the final outcropping is one of the finest in the Moosehead Lake Region.  You overlook both Big and Little Moose Ponds directly below the outcroppings.  Beyond the ponds sits Big Moose Mountain, towering well over 1000 feet higher than the outcropping.  Moosehead Lake spreads out to the north with all of the mountains in the region visible including Kineo, Lily Bay Mountains, and mountains in the 100 Mile Wilderness.  To the south stands Moxie and Moxie Bald Mountains.  There was not a cloud in the sky and the view was as good as it gets. 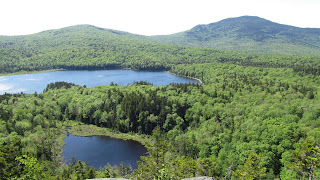 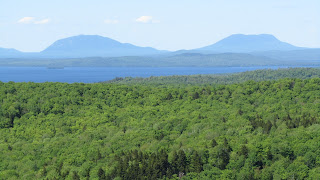 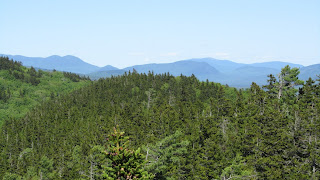 From this outcropping we had an extra treat.  Several hundred feet below the rocks sits Big Moose Pond and a smaller pond that flows into it.  In the smaller pond Puma spotted movement.  Upon closer look she realized it was a beaver.  I had binoculars with me and you could see the beaver clearly.  As it swam it approached more movement which was a second beaver.  We watched them for several minutes.  One swam toward the center of the pond while the other moved to land where we could see it moving through the grasses. Soon they both disappeared.  Although we saw no moose, there was plenty of "nuggets" along the trail as well as some tracks. 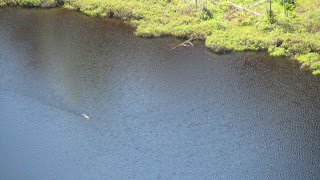 The dark spot in middle of lake is the beaver.  Clicking on picture makes it a little clearer.  Unfortunately from the top of a mountain I couldn't get a clearer shot.

There are many hikes in the Moosehead Lake Region.  The Little Moose Loop Trail is one of the easier hikes in the area and provides some of the best views in the area only minutes from town.  Puma and I are never let down when we visit this area.
Posted by TOMCAT at 4:54 PM