The forecast seemed like it would provide a window of nice weather just long enough to get in an alpine hike Sunday.  I got up at 4am and headed to Baxter State Park.  My destination for the day was Katahdin and Hamilin Peak, Maine's two tallest mountains.  The loop covering the two mountains is probably my favorite route to hike in New England.  The hike covers over 11 miles with nearly half of distance above treeline taking in perhaps the most stunning mountain scenery east of the Rockies.

The morning started without a cloud in the sky and looked promising for a good day.  The 90 minute drive to the park passes through a remote area that offers a good chance for seeing moose.  I was not let down.  I managed to pass a trio of moose along the road.  A short distance later another moose emerged from the roadside, the fourth one of the morning.  A good start to the day. 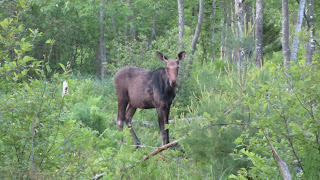 The only moose of the four I saw that was photogenic 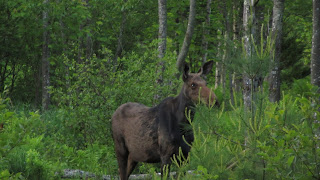 
I arrived at the trailhead at Roaring Brook about 640am.  To my surprise there was only a handful of cars.  This parking lot often fills to capacity on summer weekends and is closed to additional traffic when full.  I passed a few groups on the Chimney Pond Trail before reaching the trail to Hamlin Peak.

Hamlin Peak, despite its status as Maine's second highest peak, sees relatively few people.  I wouldn't see another person until I reached Katahdin, nearly 5 miles away.  Hamlin by itself is an attractive hike with much of the route traveling above treeline taking in alpine scenery.  The Hamlin Ridge Trail affords awesome views across the Great Basin to Katahdin and the Knife Edge as well as views into North Basin.  Once on the Hamlin Ridge,  you reach treeline quickly and your feet are usually walking on rock. 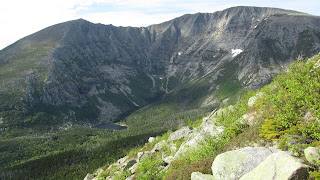 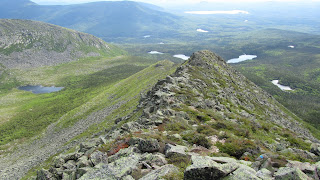 Looking back down Hamlin Ridge


From Hamlin's Peak, the hike heads to Katahdin.  The trail crosses a high alpine plateau called the Tableland.  The Tableland crosses boulder fields and alpine grasses and offers 360 degree views the entire route.  As I reached Katahdin, a group was departing and I had the peak to myself.  On a weekend in the summer, this is fairly uncommon.  Standing on Katahdin alone is quite a treat.  The view is unlike anything east of the Rockies.  Many large lakes dot the valleys.  The other peaks in Baxter State Park are close by as well as the mountains around Moosehead Lake and the 100 Mile Wilderness.  The most outstanding features are the view over the Great Basin and the Knife Edge. 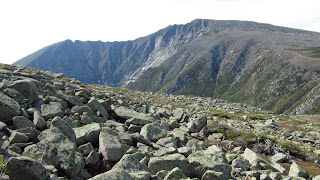 Knife Edge and Katahdin from below Hamlin Peak 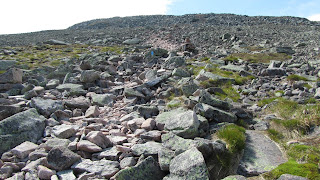 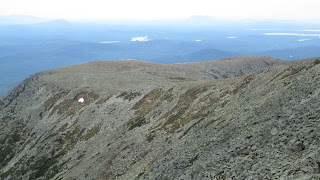 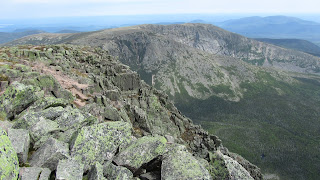 Looking back to Hamlin


The Knife Edge is perhaps the most remarkable mountain terrain in the eastern US.  The Knife Edge runs from the summit of Katahdin to the summit of Pamola for just over a mile.  While it is somewhat overstated in some trail guides, it is still quite impressive rising to a narrow ridge towering over 2000 feet above the valley on either side, a few spots only as narrow as a few feet.  All the while, the entire Knife Edge remains well above treeline.  My route took me across the Knife Edge and provided dramatic scenery the entire way.  The pace is generally slow going across the Knife Edge but the most precipitous section is the Chimney.  The Chimney is a col between Pamola and Chimney Peaks that requires careful scrambling  to safely negotiate.
Upon reaching Pamola, the trail descends over three miles, some of it over loose rock, on the Helon Taylor Trail.  I passed several hiking groups along the Knife Edge. 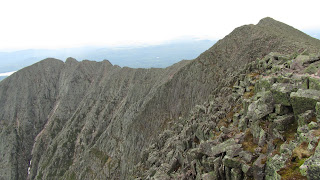 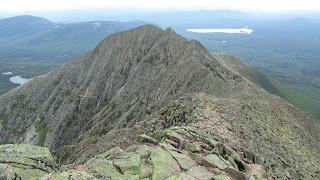 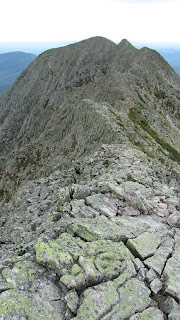 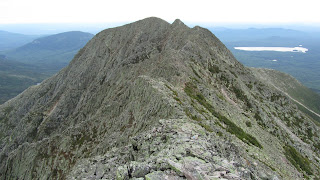 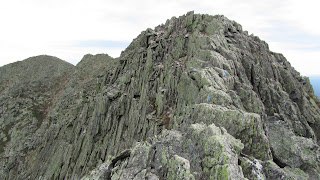 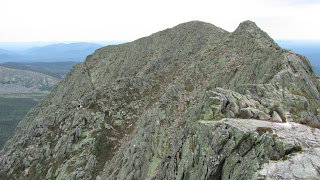 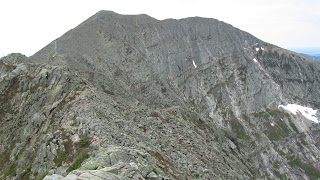 Looking back Knife Edge toward Katahdin, pockets of snow remaining

The weather held out nicely for my day.  Although some cloud cover moved in, they remained quite high and didn't obstruct any of the great scenery despite a little bit of haze.  The weather was comfortable above treeline with my thermometer reading 52F on the summit of Katahdin.  It felt somewhat cooler with a steady breeze.  On the ridges I did encounter some black flies.  Descending Helon Taylor, they were quite numerous and pesty.  They covered the backs of my arms, neck, and had fun getting in my ears.  Luckily I wasn't bit too many times.

As I said, this is among my favorite hikes.  This was my fourth time doing this loop, fifth time on Hamlin, and 15th summit of Katahdin.  Not only is the scenery impressive but Katahdin is a particularly memorable mountain to me as it marked the end of my  jouney on my 2100 mile Appalachian Trail thru hike.

I wrote about Brann's Mill Pond a couple weeks ago in "Paddling Local Waters."  I went again with Puma on Friday and wanted to post a couple pictures from that outing. 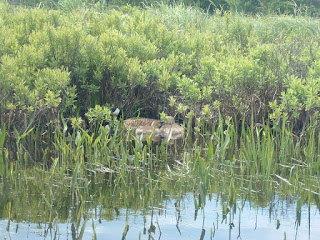 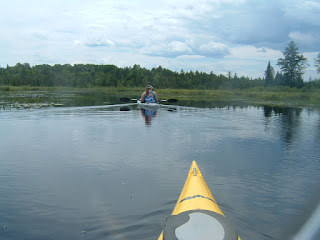 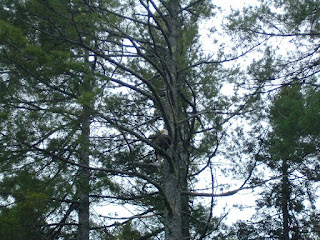 Bald Eagle perched on island, nest was nearby, click for closer view