The weather was not cooperating on my free day this weekend.  Showers were falling when I got up for the day.  The forecast called for more showers throughout the day.  It was a warm, muggy morning when the rain wasn't falling.  I wanted to get in some outdoor activity, so I decided to go kayaking.

Kayaking is a good choice in these weather conditions.  You can cool off in the water if it gets too hot. If it showers, you don't get chilled.  As long as there isn't a thunderstorm or the rain isn't too heavy, paddling in a shower isn't too bad.  Despite the somewhat dreary morning, there was no wind, which makes paddling on a lake more enjoyable.

I decided on Lake Onawa as my destination.  I never kayaked here.  The lake is surrounded by mountains and sees little traffic.  I didn't have any other ideas for an outing.  With the questionable weather, Lake Onawa seemed like good choice.  I hit the water just before 9am.

Lake Onawa is located about 45 minutes from my house.  It sits at the base of  Barren Mountain in the 100 Mile Wilderness and is visible from the Appalachian Trail.  At roughly 1200 acres, it's a decent sized lake.  While there are some camps along its shores, they are mostly concentrated in one area with majority of the shoreline being undeveloped. 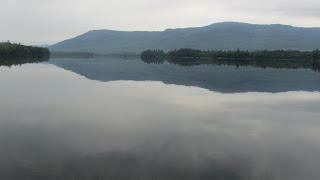 
Immediately I was presented with good scenery.  Borestone Mountain rises basically from the lake and stands nearly 1500 feet above the water.  The side of Borestone facing the lake is very steep with much of the mountain consisting of exposed cliff.  The north side of the lake is framed by Barren Mountain which rises more than 2000 feet from the lake.  The most outstanding feature of Barren is its exposed ledges and slide which are clearly visible from most areas of the lake.  The eastern side of the lake is flanked by the ridge of Benson Mountain which also rises nearly 1500 feet above the lake. 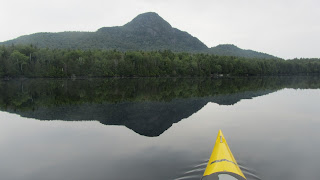 Borestone Mountain reflecting in the lake 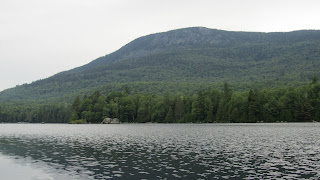 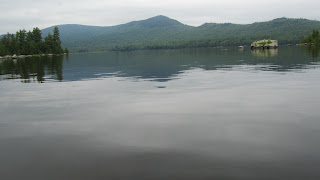 When I arrived, a few sprinkles fell.  Despite the rain, visibility was good enough to see all of the mountains.  There was absolutely no wind and the lake surface was a sheet of glass.  The calm wind and humid weather made for some bad mosquito conditions however.  Away from the shore the bugs were not much of a problem. However, in the marshy areas around lake, they were quite pesty.

The mountains were not the only scenery.  A few wildlife sightings added to the experience.  Several sets of loons were on the lake.  The best sighting was a pair of loons with a chick.  The chick was quite small.  I never saw a loon chick so close.  Besides the loons, I was lucky enough to see a couple of deer drinking at the edge of the lake. 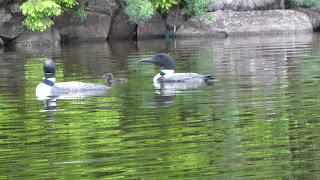 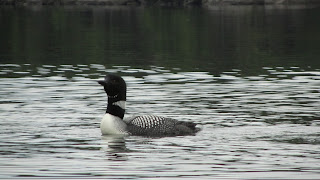 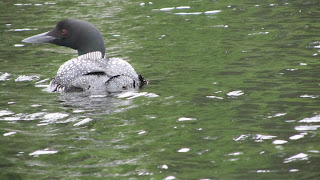 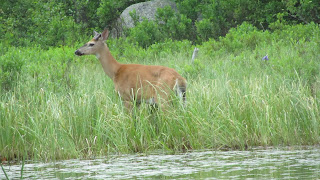 Deer that was drinking from lake, if you click on picture you can see it has antlers starting to develop

The area of the lake between Borestone and Barren Ledges is the most scenic.  The other end of the lake while still pleasant, gets into the area with camps.  The outlet of the lake holds a well known local landmark.  The Onawa Trestle is a rail bridge that crosses the outlet.  It is often photographed by locals and a popular destination with its view over the lake and the mountains that surround it. 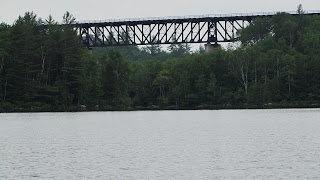 
By the end of the trip conditions deteriorated.  The clouds dropped and obscured most of the mountaintops. A steadier rain fell the last 15 minutes I was on the lake.  Luckily my trip was winding down. 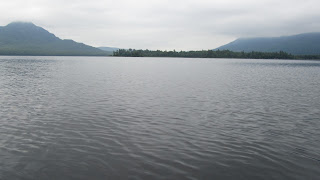 
I spent almost three hours exploring the lake.  The entire time I paddled, only one other boat was on the water.  Perhaps because the lake is out of the way and overshadowed by larger local lakes like Moosehead and Sebec, it doesn't see much traffic.  I was pleasantly surprised with the lake and will probably go back again soon with Puma.