The past couple of weeks I have been taking it easy and staying close to home.  I ran a couple times, cycled with Puma, and took one of my dogs on an easier hike on the logging roads beyond my house.  I avoided going too far into the backcountry since showers and thunderstorms were a regular threat.  Sunday's weather was beautiful and I was ready to hit the mountains.

Every year I try to embark on a few ambitious endurance day trips.  For example, last month I hiked the Presidential Traverse.  I was ready for another hike to push my limits.  This time it was closer to home in the 100 Mile Wilderness.

One of the closest places to hike for me is Barren Mountain.  Barren Mountain isn't the highest mountain around but it does involve climbing 2000 feet to reach its summit and it offers several good view points.
Barren Mountain is the first peak in the Barren-Chairback range.  This range is the first set of mountains hiking north on the Appalachian Trail (AT) in the 100 Mile Wilderness.  The range consists of five mountains: Barren Mtn, Fourth Mtn, Third Mtn, Columbus Mtn, and Chairback Mtn.

A traverse of the Barren-Chairback Range is about 17 miles and involves 5000 vertical feet of climbing.  This is a decent overnight trip and a challenging day hike.  One big problem with this trip is getting back to the beginning.  Both trailheads are on logging roads that are nearly two hours apart, making a car spot difficult.

I had a solution to this problem.  At the north end of the traverse is a new trail on AMC property that heads to one of the AMC lodges.  From the lodge another trail leads to the AT about half way through near Third Mountain.  I figured I could hike the traverse on the AT and follow these two trails on AMC land back to the AT, then retrace the AT to the start of my hike.  Looking over the guide books, I was looking at roughly 27 miles.  On Sunday I decided to give it a go.

I arrived at the Otter Pond trailhead below Barren Mountain and started hiking about 7am.  The longest climb and biggest elevation gain of the Barren-Chairback Range starts here.  A good chunk of the climb takes you to Barren Slide and Barren Ledges.  Both of these spots offer good views.  Beyond the Ledges, the trail levels for nearly two miles before reaching Barren's summit.  At 2670 feet, it's the high point of the range.  An old fire tower frame at the top can be climbed with caution to take in 360 degree views.  Another mile beyond the summit, a side trail leads to Cloud Pond, a 16 acre pond near the top of the mountain that is very remote and sees very little traffic besides long distance AT hikers. 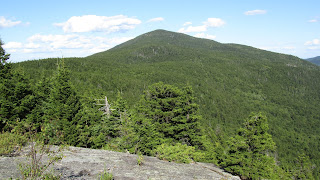 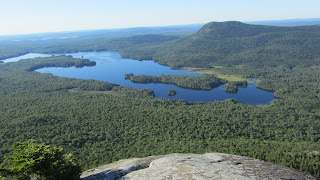 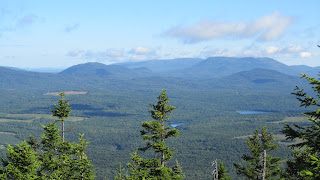 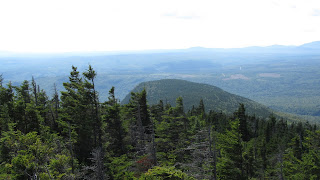 Looking back toward Barren Ledges from Barren's summit

I have hiked to Cloud Pond several times.  Beyond this point I haven't hiked since my AT thru hike in 1999.  My goal was to run the flatter parts of the trail and areas that terrain allowed.  A few factors put running to a minimum.  The trail was very muddy and rooty, making for treacherous footing and a risk of injury.  The trail was steeper than I remembered which burns too much energy over a long hike.  I ran when I could but I was limited on runable stretches.

Several points of interest are along the trail.  Fourth Mountain Bog sits between Barren and Fourth Mountains.  A stretch of bog bridges passes through the bog protecting the fragile plants from hikers.  Fourth Mountain's summit is forested and lacks views but along the way are several open ledges, mostly looking north into the White Cap Range and Lily Bay Range.  Third Mountain has several of these open ledges.  Columbus's summit is mostly wooded but Chairback Mountain has a long stretch of open ledge with great views to the north.  Reaching Chairback Mountain put me in more familiar territory as I hiked this mountain numerous times. 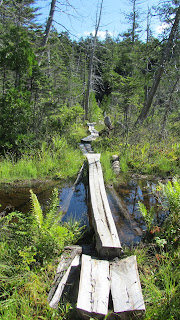 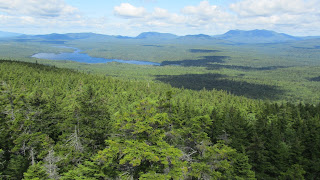 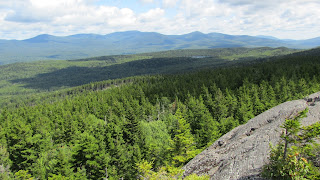 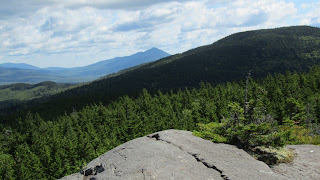 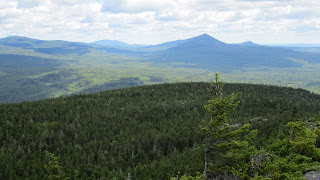 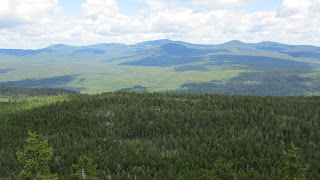 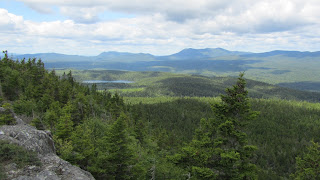 Perhaps the nicest feature of the range is its ponds.  Cloud Pond, which I mentioned is the first you reach.  It is the highest and smallest.  It also has the most remote feel to it.  AT hikers are the only ones who see it.  A lean-to sits near the shore of Cloud Pond.  West Chairback Pond is the next pond.  It is the second largest.  There are several spots to camp on its shore.  I'm not sure how they got there, but there are several canoes there.  It seems like it would quite a long haul to get them there.  Finally, near the end of the traverse is East Chairback Pond.  This is the largest of the three and has plenty of spots to camp on its shores.  Across the pond is a nice view of Columbus Mountain.  Blueberries were ripe and abundant on the banks as well. 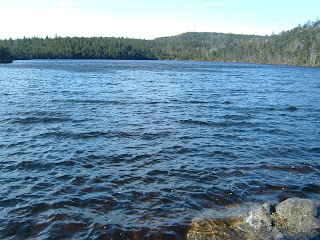 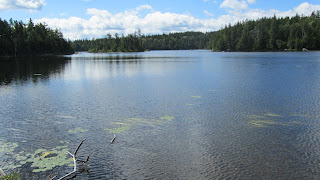 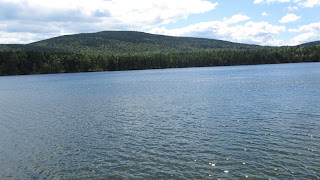 The Henderson Brook Trail leaves the AT at the end of the traverse.  This trail leads to the Gorham Chairback Lodge by Long Pond on the AMC's 100 Mile Wilderness property.  This is a short trail that follows the brook and a nice break from the mountainous terrain.  I stopped in at the lodge to refill my water before hitting the Third Mountain Trail.  This trail climbs 1000 or so feet back to the ridge of the Barren-Chairback Range on the AT just below Third Mountain.

This climb is where I began to feel the tiredness settle in.  By the time I reached the AT again I hiked over 20 miles.  This long winding climb slowed me down.  From the AT I retraced my steps back to the beginning.  I reached the first open ledge with views toward Barren Mountain, or at least what I thought was Barren.  I was looking at Fourth Mountain instead.  I didn't remember how steep and rocky the trail was from earlier in the day.  The climb wore me out. 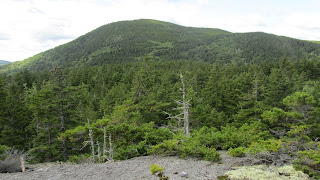 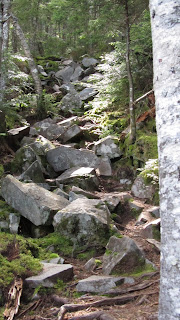 Typical Maine AT, straight up the rocks

Beyond Forth Mountain, the going wasn't too bad.  Fortunately the trail gained far less elevation and was less steep heading back up Barren Mountain.  From the summit of Barren I called Puma to let her know I was running a little behind so she wouldn't worry about me.  Beyond Barren the trail is in good shape and I could run much of the way to Barren Ledges.  I did run out of water in my Camelbak somewhere around Barren's summit.  This wasn't a major problem since I was close enough to the end of the hike and had plenty in my car.  10 hours and twelve minutes after I started, I reached my car. 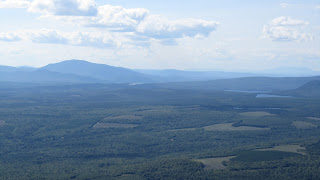 I did have one encounter on the trail that I wish I could explain.  Shortly after Third Mountain I caught a glimpse of the back half of an animal from the middle of the body back and its long tail.  At first glance I assumed it was a dog and figured I would reach it and the people very quickly.  I never did reach anyone.  It was fairly large and tan colored, with a long tail.  It was not the kind of terrain for a stray dog to wander without seeking food from people.  I'm an agnostic (skeptical, but believe they may exist) when it comes to mountain lions in Maine, but when I thought about it, what I saw fit the description of a mountain lion.  When I got back to my house I looked up images of mountain lions and I still can't rule out the possibility.  I'm not saying that's what I saw, I'm simply saying I had an unidentifiable wildlife sighting.

When I got home, I looked over my books and determined the hike was over 29 miles.  Only a couple times when I thru hiked the AT did I ever hike longer in a day.  This was further than I thought it would be.  The elevation gain for the trip was about 6000 feet.  I felt more beat on this hike than the Presidential Traverse which was about 23 miles and 9500 vertical feet.  Part of this exhaustion may have been the lack of water the last couple miles, or the 29 miles.  My legs were wobbly the rest of the night.

The Barren-Chairback Range doesn't see much traffic beyond long distance backpackers.  It is remote and not as lofty as some of the other parts of the AT in Maine.  The entire traverse has a remote feel.  The thick spruce forest along most of the traverse blocks the sun and keeps the air cool and comfortable for hiking, even on the hottest day.