In my last post I wrote about mountain biking in the Sugarloaf area.  I rode mostly on the Maine Huts and Trails system and was impressed with the singletrack.  I was eager to explore the area more.  With a nearly perfect fall weather forecasted on the weekend, I decided to return a week later.

Several groups have been taking charge to create an impressive trail system in this region.  Maine Huts and Trails is building a system that will eventually extend from Bethel, ME to the Moosehead Lake Region.  About 50 miles of the MHT is in place with several side trails in addition to the main trail.  NEMBA (New England Mountain Bike Association) is continually working hard to improve and expand an already nice trail system.  The Sugarloaf Outdoor Center, known more for cross country skiing, has a very impressive system of trails that can make any level of mountain biker happy.  On Saturday, I utilized trails from all of these groups and had a great day.

After last weeks ride, I looked more into riding opportunities in the region.  I found a loop that seemed promising.  The Carrabassett Valley NEMBA website suggests the Carrabassett Valley bike shop at the Sugarloaf Outdoor Center as a source of information.  I started my ride from the Outdoor Center so I could ask the bike shop for trail information.  Part of my loop wasn't mapped and I needed local knowledge to make sure I found my way.  Despite being busy with rentals, the attendant was happy to fill me in on trail knowledge.  He also gave me a map that covered all of the trail systems previously mentioned.

My loop was about 18 miles in length.  After a short jaunt on the Narrow Gauge Path, a local rail trail following the Carrabassett River, I began climbing to Stratton Brook Hut on a trail called Newton's Revenge.  This trail climbs about 600 vertical feet in two miles or so to the hut.  The trail is mostly double track and climbs nearly continuously to the hut with a few steeper sections.  The trail seems to be newer as the tread isn't always well packed along the way.

After a short stop at the hut where I asked about trail info, I continued on my way.  I followed a very short trail from the hut to a nice view overlooking the Bigelows before descending on the hut service road.  The service road is a steep dirt road that is heavily washed out, perhaps the trickiest part of the entire day.  After a mile on the road I descended to Stratton Brook Pond trailhead on the unmapped trail dubbed "the Dead Moose Cut-off" by locals.  Despite being unmapped, it was easy to follow although slightly overgrown in a few spots.  It appears to be a snowmobile trail in winter but is marked with MHT markers.  I was now at the trailhead for the Bigelows.  A mile or so on the Fire Warden's approach trail led me to the Esker Trail. 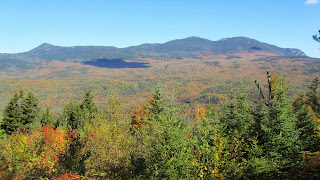 The Bigelows from Stratton Brook Hut 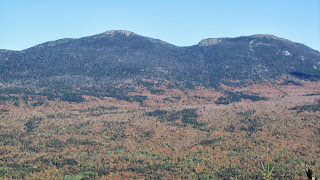 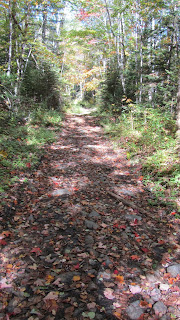 A nicer section of the Dead Moose Cut-off 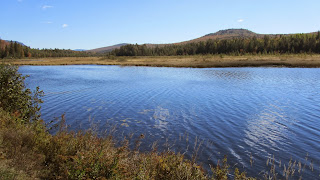 Looking over Stratton Brook Pond.  Stratton Pond Hut is on the higher hill in the picture.

The Esker Trail is a fun stretch of singletrack.  This trail is built for mountain bikes and maintained by NEMBA.  It is fast and easy singletrack that follows Huston Brook.  There is never much elevation change on the trail.  Except for a few small water crossings, the riding is pretty straightforward.  I saw as many moose tracks as I did tire tracks along the Esker Trail.  A few boggy sections near the trail appear to be prime spots for moose.  A couple of good views of the Bigelows are visible along the trail.  I don't have the distance of the Esker Trail but it was at least five miles of continuous singletrack before ending on Huston Brook Road. 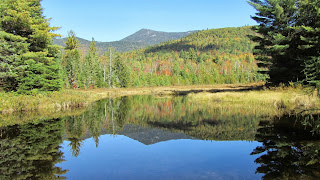 South Horn reflecting in a bog along the Esker Trail 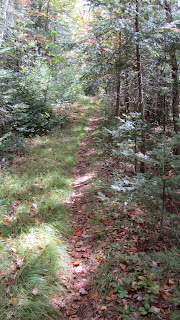 The remainder of the loop was easy riding on mostly road and rail trail.  The ride seemed to descend almost all the way to the Narrow Gauge Trail.  The last few miles of the loop follow the Narrow Gauge Trail.  Along the way however, NEMBA has constructed several side trails for mountain bikes that offer short and windy stretches of singletrack.  None of the side trails are too long but they offer a nice alternative to the flat and smooth Narrow Gauge Trail.  Several of the side trails follow closely to the Carrabassett River offering views of the rocky river and its many swimming holes.  Before returning to the Sugarloaf Outdoor Center, I detoured on three of the five NEMBA singletrack trails.  Here is a map of my route.  http://www.wskitv.com/wp-content/uploads/2013/06/map2.jpg  I started from the Campbell Field Trailhead rather than Stratton Brook Trailhead


I had some time and energy to spare, so I decided riding the Outdoor Center trails.  The trails are well marked with numbers that correspond to the map.  They are rated like ski trails with the green, blue, and black designations.  I rode roughly the perimeter of the trail system on the eastern half.  I rode a variety of trails that ranged from technical, rooty singletrack to easy double track.  Plenty of singletrack can be found on this trail system.  Nice views can be found along the trails as well.  Readington Pond was an attractive spot to take a break.  Several views of the ski area and surrounding peaks were found along the trail.  I rode nearly ten miles total on the Outdoor Center trails.  There are many more miles of riding there that I didn't get to explore. 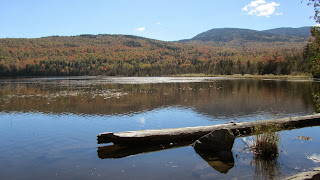 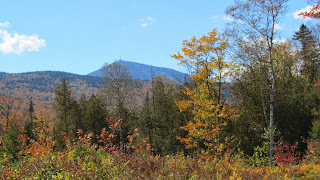 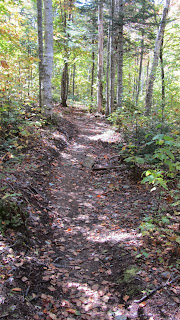 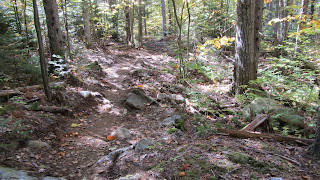 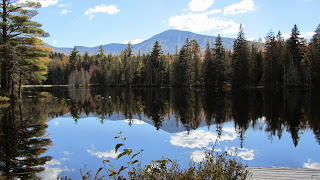 The numbers correspond with trail numbers on map. http://carrabassett.nemba.org/wp-content/uploads/2013/06/CV-Bike-Trail-Map-20130603.pdf


I rode a total of 27 miles on just about every possible type of trail.  I highly recommend Sugarloaf as a destination for mountain bike riding.  I think riders of all abilities can find something here.  Advanced riders can easily spend a couple days exploring the miles of trails the region has to offer.  For those that participate in numerous outdoor sports, a great weekend can be planned with some of Maine's best hiking just down the road in the Bigelows combined with some of Maine's best mountain biking.