Katahdin Lake is a fairly new addition to Baxter State Park.  Only the newest trail guides have information about the trails in this area.  The lake is located on newly acquire park land on its eastern side.  I planned a hike here a couple of years ago with Puma but never made it.  The road that reaches the trailhead for Katahdin Lake was closed for the muddy fall season.  We ended up hiking Sentinel Mountain that day.  For whatever reason we never made it to Baxter State Park together last year.  The weather has been perfect the past few days. I suggested the hike to Puma on Tuesday.  Wednesday morning we were in Baxter State Park to finally hike to Katahdin Lake.

Reaching Katahdin Lake is not difficult.  The trailhead is along the Roaring Brook Road about five miles from the parks southern gate.  The trail stays in the low country the entire trip to the lake.  At times the trail is wet and muddy, however, plenty of bog bridges along the way keep you out of the worst of the mud.  There were quite a few animal tracks along the way including several spots of moose tracks.  In just over three miles, we reached South Katahdin Lake Lean-to and a day use area with a small pavilion and picnic table.  Just beyond a couple of canoes are available to rent for use on the lake. 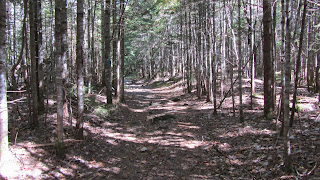 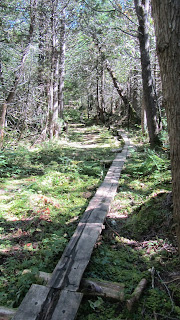 One of several bog bridges

By the canoes, we finally reached the lake.  There is a small strip of a gravel beach.  From this point the lake is pretty, but you can't see any big mountain views.  It is a quiet relaxing spot.  The water was softly lapping on the shore and the occasional loon call was heard.

Following the beach a short distance the views changed dramatically.  Katahdin Lake Wilderness Camps, a privately owned  primitive backcountry lodge, operates their facility not too far from the end of the Katahdin Lake Trail.  As you approach the beach area by their camps, the views open dramatically.  To the north, the bare alpine summit of  Traveler Mountain (see last blog post.)  However, the most stunning view is that of Katahdin.  The Knife Edge is easy to see.  The Great Basin and true summit are somewhat obscured from the angle but the North Basin is in full view.  A unique and beautiful view of the Katahdin area with the attractive lake in the foreground. 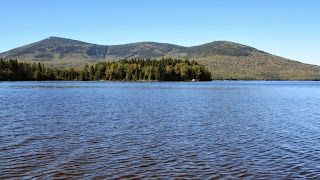 The Turner Mtns are the first to come into view 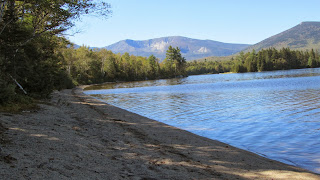 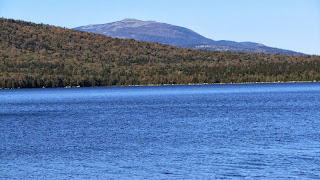 Traveler Mtn to the north 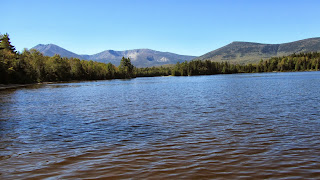 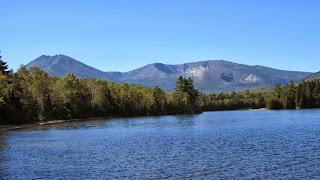 Close up of Katahdin Massif over Katahdin Lake

As far as Baxter State Park goes, this is a fairly easy hike.  With a few short side trips we covered nearly 7 miles but never had any significant elevation change.  We reached the lake in just over an hour.  For anyone exploring Baxter State Park looking for a shorter, easier hike that would be possible with children, Katahdin Lake is a nice break from the large mountains.  There is a definite feel of remoteness at the lake.  Despite seeing numerous cars at the trailhead, we saw only two groups on the hike but seemingly had the lake to ourselves. 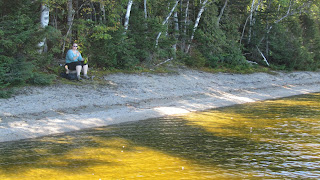