I never heard of Tumbledown Mountain when I moved to Maine seven years ago.  I first became aware of it when I saw a series of mountain photos of Maine.  Most of the photos were of the Katahdin area, a few of the mountains in Acadia National Park, and several of Tumbledown.  I considered hiking there for years but never made the trip.  Talking with the J Man about a destination for a hike Sunday, we decided on Tumbledown.  We both heard good things about the hiking and scenery in the area but neither of us had been there.  With a stupendous forecast for Sunday, we made the trip to Tumbledown.

We decided on hiking the Loop Trail up the mountain.  When we arrived at the trailhead we had difficulty finding the trail.  After searching for twenty minutes or so, we found the trail tucked in the woods just before the parking lot.  The loop trail climbs steeply.  As it approaches areas of cliff, the trail seemed to disperse in several directions.  We apparently took the wrong turn and found ourselves facing cliff bands.  There seemed to be ample foot traffic in the area so we didn't realize we were off-trail.  There was even a fixed rope in a crevasse between rocks.  The rope wasn't very sound so we scrambled over the rocks sans rope.  We found ourselves faced with several class 4 maneuvers to get through the cliff sections.  The views from the cliffs were attractive looking to the west.  We found ourselves above the cliffs in a fairly thick spruce forest.  Within a few minutes of moderate bushwacking, we stumbled upon the trail. 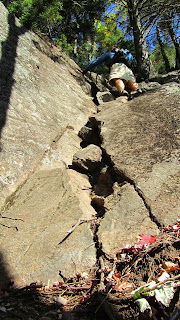 Making my way up a section of cliff 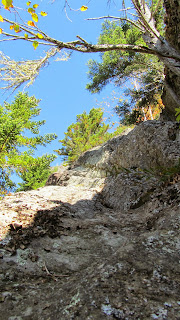 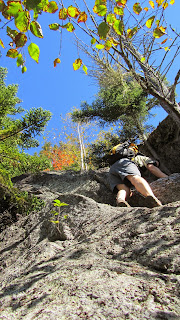 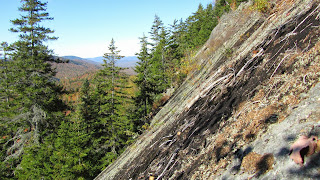 Looking across section of cliff 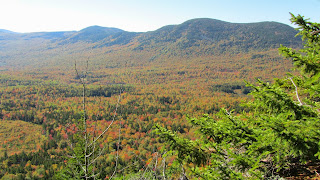 
The remainder of the trail to the peaks went smoothly.  There are some impressive features along the Loop Trail.  After getting back on the trail we reached the "Great Ledges" and the views towards the 700 foot cliffs on Tumbledown.  It climbs quite steeply near the top.  One section has hikers crawl through a small cave called "Fat Man's Misery" and climb out of it on steel rungs placed in the rocks.  Several sections of scrambling are necessary as the trail makes its way up the craggy mountain. 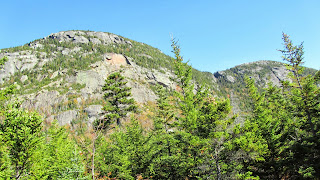 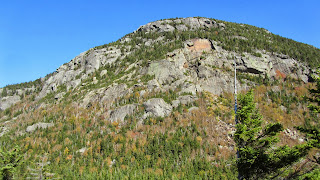 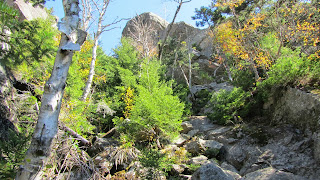 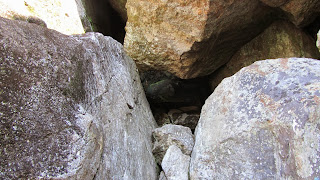 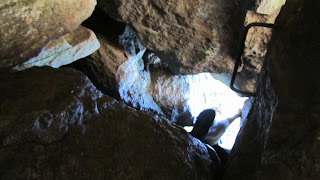 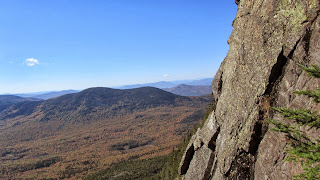 
The Loop Trail ends near the top of the mountain.  We took a left and climbed the West Peak.  After admiring the views we backtracked and headed to the East Peak before descending to the pond.  The view of the pond from the surrounding peaks is one of Maine's classic mountain scenes.  Tumbledown Pond is quite impressive as it sits nestled between rocky peaks. 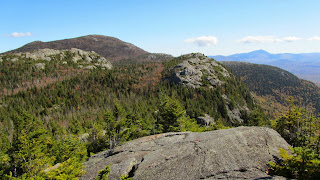 Looking toward Little Jackson in background 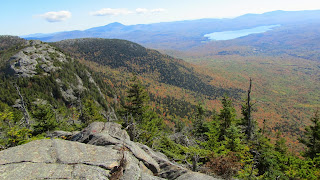 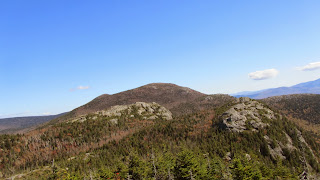 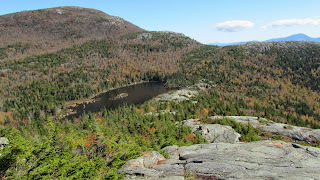 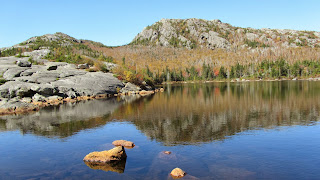 
Our next destination was Little Jackson Mountain.  At 3470', Little Jackson is less than 100' lower than Jackson.  However Little Jackson has an open alpine summit with endless views in all directions.  We didn't climb Jackson but the summit is wooded, with the exception of a small clearing that houses a shed with radio towers.  From Tumbledown Pond, an unofficial trail leads to Little Jackson.  The end of the trail was marked, however, the trail itself is not marked.  Several places the trail becomes overgrown and difficult to follow.  Several trails lead off of it where previous hikers made a wrong turn.  After a little of trial and error, we reached a cairn that confirmed our route.  The trail became more prominent as we climbed.  Near the summit the trail was easier to follower as the vegetation thinned. 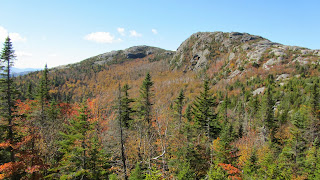 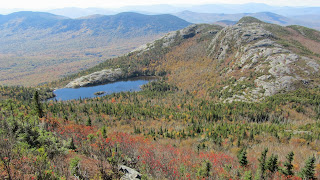 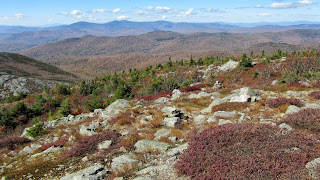 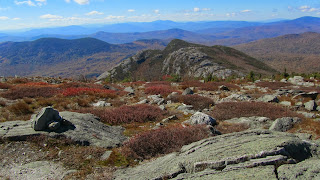 
Little Jackson has an impressive summit.  It's open summit offers spectacular views in all directions.  Just below the summit, Tumbledown Pond is framed by rocky peaks.  To the south is less mountainous with Webb Lake and Mt Blue close by.  To the north and west, the views are most impressive.  The Bigelows, Crockers, Sugarloaf, Abraham, and Saddleback are easy to spot.  Toward the west the ridge with Bemis, Old Blue, and Elephant are close.  Beyond is Baldpate mountains around Grafton Notch as well as the Mahoosucs.  The Presidentials are easy to spot with many other White Mountain Peaks visible in New Hampshire. 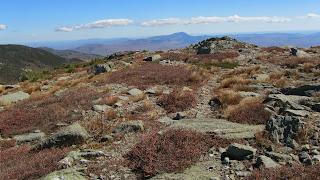 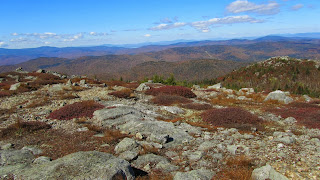 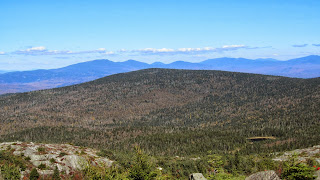 Distant mountains with Jackson Pond below 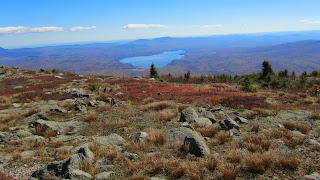 
Tumbledown and Little Jackson have amazing scenery.  To add to the already impressive views, the fall foliage was near peak in the western Maine mountains.  The valleys were in full color.

We decided to descend to Tumbledown Pond via the unofficial trail on Little Jackson.  From there we headed down the Pond Trail to avoid descending the cliffy Loop Trail.  We walked along the road back to our car. 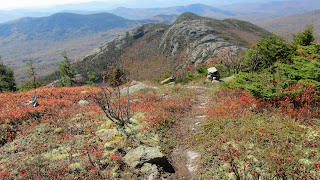 
In the beginning we saw few people.  We didn't see anyone along the Loop Trail.  We did pass two groups on the way to the pond but nobody else.  We had Little Jackson to ourselves.  When we reached the pond on the way down, the pond area was very crowded with people.  This area is known to see a lot of people, and for good reason with its stunning scenery.  Descending the Pond Trail we passed many people in both directions.  To avoid the crowds, an early morning start or midweek trip would be best.  A sign along the road also indicated that the road to the trailhead is closed November through May.

For anyone that enjoys hiking and great mountain scenery, Tumbledown won't disappoint.   I can't believe I waited so long to visit.  Having hiked most of Maine's mountain areas, I would put this on a list of must see mountains in Maine.
Posted by TOMCAT at 6:25 PM