Last month I headed to the Maine Huts and Trails (MHT) system in The Forks, ME. (See http://tomcatoutdoors.blogspot.com/2013/08/ups-and-downs-mountain-biking-in-maine.html)  It was a great let down as the trail was terribly overgrown and unridable.  After that ride I went to the MHT website and did some research.  The section I attempted to ride was not recommended for bikes.  The MHT trails in the Sugarloaf area seemed much more promising, and in addition to the MHT, there are numerous other side trails that are able to be ridden as well as numerous dirt roads.

I gave the MHT system another try.  I chose the Sugarloaf Airport trailhead as my starting point.  After looking at my map I decided to ride to Flagstaff Hut and back.  After a short connector trail, I was on the MHT trail.  From the beginning, the trail was mostly singletrack.  This is something I have not found much of in Maine.  Majority of the places I have ridden are comprised of logging roads, rail trails, and ATV trails.  I have found only a few short stretches of singletrack on any of these rides.  Nearly all of the MHT is singletrack.

I stuck to the main MHT trail most of the way to the hut.  Not too far from the start, I took a short side trail called Larry's Trail that followed Poplar Stream and passed by Poplar Stream Falls.  Although there is a short section of rock steps that a bike must be carried, the rest of Larry's Trail was able to be ridden despite some challenging sections with numerous roots.  Larry's Trail is a worthwhile side trip to view the falls. 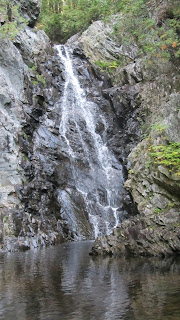 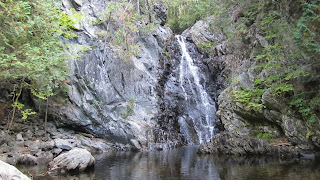 A wider shot of the falls

While most of the singletrack is fairly straightforward riding, a few sections are technical with numerous rocks and roots along most of the path.  The tread was well worn but somewhat soft.  I don't think the trail has seen enough bike use at this point to firmly pack the trail tread.  Because of the soft trail, the riding is somewhat slow, although some sections seemed more used than others.  The trail was generally rolling but never saw any big climbs or descents. 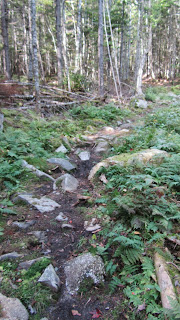 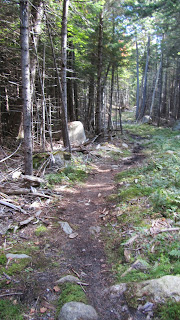 The trail had a detour at one point.  Before entering the Bigelow Reserve, a sign warned of no bike traffic in the Reserve and had directions for a bike detour that took me onto paved Long Falls Dam Road for a few miles.  The MHT trail is accessed again after the detour on Long Falls Dam Road.Hut.  I followed the MHT to Flagstaff Hut.  Much of the trail near the hut seemed to see more use and was firmer and faster.  I reached the hut after 13 miles with all but about 4 miles on singletrack.

I stopped at the hut briefly.  The hut seemed very similar to the AMC huts that I visit when cross country skiing in the 100 Mile Wilderness.  I asked the hut workers a few questions about what trails were ridable before continuing my ride.  Leaving the hut, I rode the Shore Trail that follows Flagstaff Lake.  The Shore Trails overlooks the lake and provides great views of the Bigelow Range.  The Shore trail, while relatively flat, consisted of windy and technical singletrack.  This was probably the most technical riding that I saw during the day.  The trail was tight with plenty of roots and rocks to navigate. 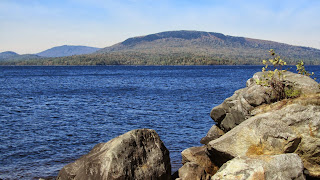 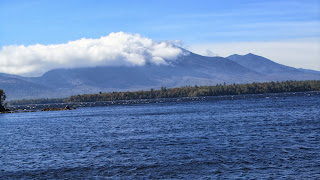 Clouds closing in on the Bigelows over Flagstaff Lake.  The twin peaks of the Horns on right 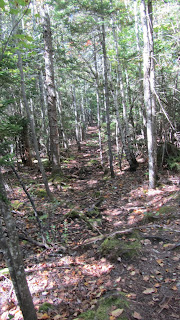 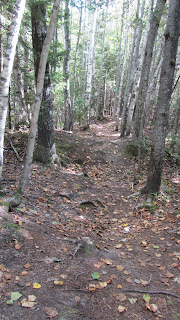 I skipped most of the road detour on my return trip.  The hut crew said that the detour section permitted mountain bikes.  I followed the MHT trail through this section but the trail clearly saw little traffic the further I traveled.  The trail had very little worn tread and was extremely slow riding through mostly grass.  I took a short detour on the road one more time to skip this slow section.  The remainder of the ride back, I followed Carriage Road.  Carriage Road is a little traveled dirt road marked for use by bikes on the MHT map and provides a quicker return to the Sugarloaf area.  I started later than I would have liked so Carriage Road got me back to my car quickly.  My ride totaled 27 miles in just under 3 hours with more than half of the trip traversing singletrack.

This was one of the best mountain bike trips I have ridden this summer.  The plentiful singletrack was definitely appealing.  There was some good scenery along the way.  Despite the morning starting off with a heavy fog, the weather turned out beautiful and sunny with temperatures in the mid 60s and a nice breeze. The leaves are starting to change color which added to the appeal of the day.  With exception to the flat trail sections close to Carrabassett Valley and Sugarloaf trailheads, I didn't see any other people for such a nice day.  While I didn't see any wildlife, plenty of moose tracks followed the trails. 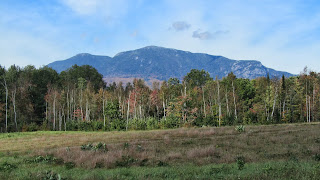 I would like to ride this area again.  The MHT system is fairly new and a work in progress.  There are several "coming soon" trails on my map that may be in place by now.  There seems to be plenty of exploring to do on the trail system.  This trail system seems to have good potential as a mountain bike destination as is it grows.  For more info on Maine Huts and Trails see: http://www.mainehuts.org/.   Here is an interactive map to get a basic idea of some of my route:  http://www.mainehuts.org/maps/.
Posted by TOMCAT at 11:06 AM