Baxter State Park has no shortage of great hikes.  Katahdin sees the most hikers as it is the highest peak in Maine and one of the most stunning mountains in the east.  Hamlin sees a fair number of hikers being the second highest peak in Maine.  Usually the Brothers and Mt Coe have numerous hikers on any given day since they are on the New England 100 Highest peak list.  All these mountains are usually accessed from the southern entrance to Baxter State Park.  The northern entrance to the park is a long ride from the southern entrance and sees a fraction of the visitors.  The most impressive hike accessed from the northern entrance is the Traveler Loop.

The Traveler Loop is one of New England's best kept secrets.  The 10-11 mile loop traverses the Peak of the Ridges, Traveler Mountain, and North Traveler Mountain.  Much of the route travels above treeline on bare rock and rewards hikers with stunning views much of the hike.  Because of its remoteness and far northerly location, it sees very little traffic.  If this hike was closer to a population center, I'm sure it would be heavily visited.  Anyone hiking it has a good chance of solitude.

The hike starts at the South Branch Pond Campsite.  The first mile and a half follows the Pogy Notch Trail and doesn't gain any elevation as it roughly follows the shore of Lower and Upper Branch Ponds.  When the trail leaves the Pogy Notch Trail, it begins climbing the Center Ridge Trail to Peak of the Ridges.  In just over two miles to the summit, the trail gains nearly 2300 feet in elevation.  The trail climbs rock and ledge from the start and the views start quickly.  The South Branch Ponds and South Branch Mountain come into sight first.  After only a little more climbing, much of Baxter State Park comes into view from Katahdin in the south to views far into northern Maine. 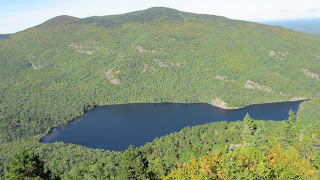 One of the first views along the way.  Looking at Upper South Branch Pond 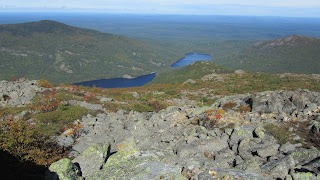 The most challenging part of the hike is the climb to Peak of the Ridges. Leaving Peak of the Ridges the trail follows the Traveler Mountain Trail.  The trail follows a feature known as the "Little Knife Edge" immediately leaving the peak.  While not as impressive as the Knife Edge on Katahdin, it does make for a nice traverse across a relatively narrow spine of rock.  Much of the trail is exposed.  The trail travels through small stretches of alpine meadow when not on the open rock.  Short stretches of woods are traveled as well as a fair amount of talus and scree between stretches of alpine terrain.  Part of the challenge is watching your step and not focusing on the views of the mountains to the south with Katahdin as the centerpiece.  While the trail is blazed and marked with cairns, there isn't really much of a trail.  The route is used so infrequently that no real footbed has been established except for brief sections in the woods or through grassy meadows. 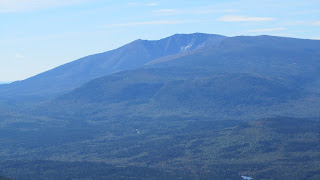 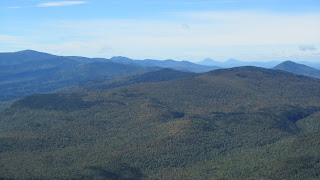 Many visible mountains as far as the Spencers by Moosehead Lake 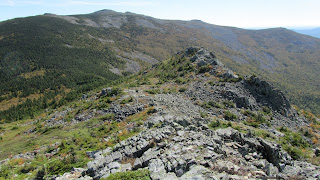 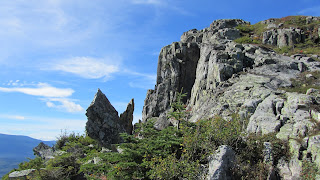 Looking back at Peak of the Ridges 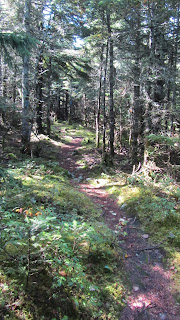 A short stretch back in the woods 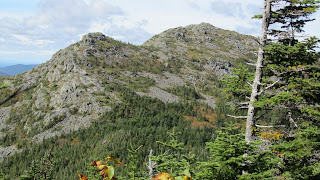 Peak of the Ridges 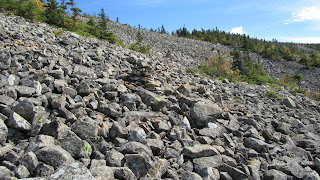 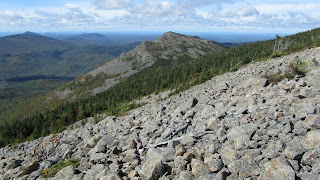 Peak of the Ridges over talus field

Traveler Mountain is reached just over a mile from Peak of the Ridges.  At 3541 feet, it is the high point of the trip.  At its summit the wind was very gusty.  I would estimate a few of the gusts reached 50 mph as the wind occasionally pushed me off balance.  The Traveler Mountain Trail runs nearly 3 miles to North Traveler Mountain.  Along the way the trail passes through sections of mixed forest, long stretches of open ledges, and fields of scree and talus.  Views to the north extend far into northern Maine with Matagamon Lake in the foreground. 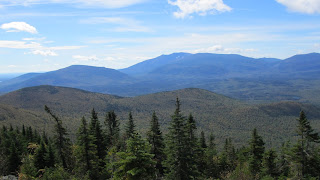 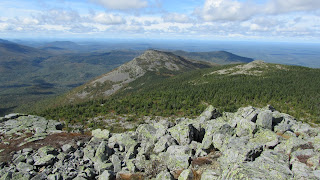 One more look at Peak of the Ridges 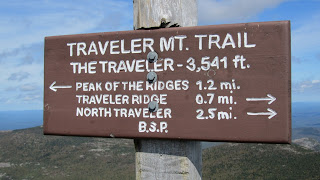 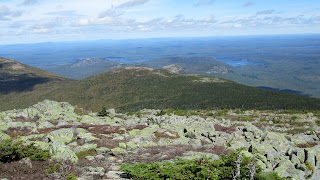 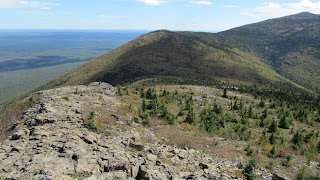 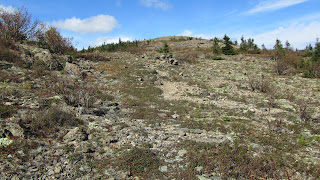 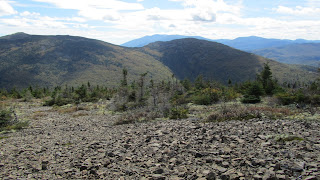 Katahdin beyond Peak of the Ridges

The last 2-3 miles follow the North Traveler Trail.  The views continue much of the way as the trail passes through several more alpine meadows and often follows open ledges as it descends back to South Branch Pond.  After 10 plus miles you get back to the start with only a short walk through the campground being retraced to the trailhead. 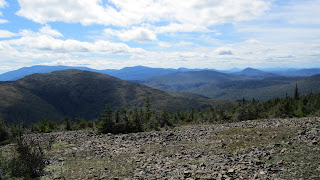 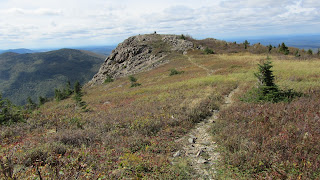 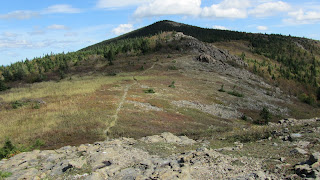 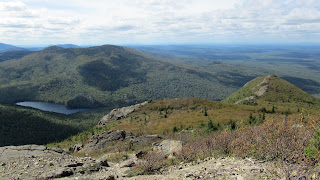 This was my second trip hiking the Traveler Loop.  It had been over four years since I hiked it and I was eager to revisit.  This time the J Man came along and we were not disappointed by this trip.  The weather turned out nearly perfect with sun most of the trip and an autumn-like 60 degree day.  To add to the scenery, the leaves were just starting to show some of their color.  One other surprise was the lingering blueberry crop most of way.  Many of the bushes still had a substantial crop making for a nice snack along the way.  We saw very few people throughout the day.  We passed one hiker climbing Peak of the Ridges.  Descending North Traveler, we passed one other pair.  I'm sure Katahdin was quite crowded on such a beautiful day.  For anyone visiting Baxter State Park, I highly recommend hiking the Traveler Loop.  It is one of my favorite trips in Maine.